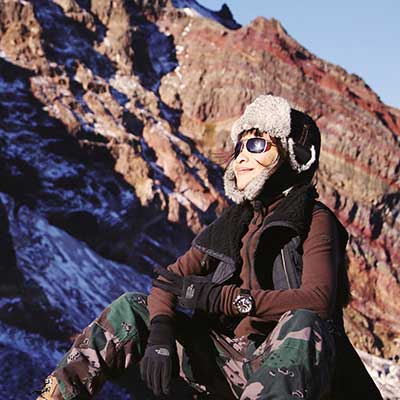 For the high-resolution 10-inch screen, Ford Performance worked alongside Conjure for graphic design and Pektron for development and manufacturing. Professional racer and Ford GT test driver, Scott Maxwell, also contributed input — suggesting an expanded redline approach on the tachometer, as well as performance information prioritization. The new digital dash features bright and sharp graphics with data displayed efficiently, in ways that help keep the driver focused while taking the Ford GT through its paces. Switching between driving modes is all done on the steering wheel.

"Driver focus and attention are key with such high performance. We’ve designed the GT with a sleek digital instrument display that changes depending on driving mode in ways that are important and usable to the driver," said Jamal Hameedi, chief engineer of Ford Performance.

In Normal mode, the simple theme keeps the bold speedometer in the center with gear selection to the right. Fuel and temperature are at the top left, while a tachometer — shaped like a hockey stick — is dominated by the 3,000 - 7,000 rpm range. Due to the quickness of the engine revving, the lower rpm section is compressed in scale.

Wet mode gets a blue theme and shows similar information to Normal mode. The graphics at the bottom receive a visual treatment that resembles shiny, wet pavement — a constant reminder for the driver.

In Sport mode, information prioritization starts to differ. The speedometer is moved to the right while gear selection gets front and center. The bright orange theme proved the favorite of most Ford GT test drivers.

The V-Max mode is for those gunning for top speed. A large speedometer takes center and the tachometer is rendered merely as a line. Fuel level is moved to the top left while turbo boost, coolant temperature, oil temperature, and oil pressure stay on the right side.

"This is exactly what I want to see when I want to see it. These innovations won’t be restricted to the new Ford GT. Future models will also benefit from what has been learned and developed in Ford’s digital instrument technology," said Joey Hand, Le Mans GTE-Pro winner

If all goes according to plan, Volkswagen PH dealers might have all-new Amarok in 2 years

What will it take for Mercedes-Benz PH to launch EV models?