Some say 2013 will be unlucky, and if the Mayans had their way, we wouldn't even be here. We're still here, and we say 2013 will be an exciting year for car enthusiasts, simply because of the cars that are set to break out this year.

So, to welcome in the New Year, here are our 13 picks for 2013's upcoming models (both confirmed, probably, or rumored), covering expected local, regional and even global premieres. If you're in the market for a new car this 2013, then some of these just might be worth the wait.

Kicking off 2013 will be Toyota Motor Philippines, as the country's number one automaker is preparing for the next generation RAV4. The all new 4th generation model will renew Toyota's thrust in the compact crossover segment, a class the RAV4 was the pioneer of.

The new model gets Toyota's most modern design statement yet, highlighted by high tech details (LEDS and such) on a crossover with a strong, muscular profile and stance. Based on the same platform as the Camry (as was the previous model), the all new RAV4 gets the same 2.5-liter engine that drives either the front wheels or all four, with varying levels of options (leather, features, etc.).

Subaru has had a great 2012, highlighted by the launch of the XV, the Impreza, as well as the BRZ. 2013 promises the arrival of the all new Forester, the XV's bigger brother in the compact crossover segment.

The all new Forester will complete the Subaru lineup, and will be arriving with a pair of engines: a naturally aspirated FB20 in the 2.0i. as well as a turbocharged FA20 DIT engine that develops 276 horsepower. The 2.0i will get a 6-speed AT while the powerful 2.0XT will have a Lineartronic CVT, unlike the 4-speed autos in the previous models (the prior 2.0i and 2.5XT).

Expect SI Drive and the new X-MODE control system for the Symmetrical AWD system to be in the Forester, the latter improving on the Forester's abilities in slippery or uneven road surfaces.

Notable for this year will be Mazda, as the brand has just transitioned from Ford Group Philippines to Berjaya as the official distributor. As their first salvo for 2013, specifically for the Manila International Auto Show, will be the all new Mazda6.

They're still hush hush about the details, specs and pricing, but what we know is that the Mazda 6 is produced at their facility in Japan, and features technologies such as a unique brake energy regeneration system, SKYACTIV-G, among others.

Of course, what we're really keen to find out is how it drives, as previous generations of the Mazda 6 have never failed to impress when it comes to driving dynamics.

If you're just starting a new family, then perhaps the all new Kia Carens is an MPV worth waiting for... in fact, it'll be in Kia Philippines showrooms come 2nd quarter of this year.

The all new model was officially revealed at the Paris Motor Show last year, and still sports the same compact MPV proportions, along with a thoroughly redesigned look that conveys more athleticism from the stance and the details. Of course, the Carens prominently displays the tiger grille in a small package that can carry 7 passengers.

Expect a range of small displacement CRDI and gasoline engines to make their way into the new Carens.

From 2010 to 2012, Ford has been launching one great product after another starting with the Fiesta, then the Explorer, the Ranger, and more recently the Focus.

Next up from Ford is the upcoming EcoSport. Previewed at the Auto Expo in India, the EcoSport is a Fiesta-based compact crossover SUV, and has just gone on sale in India and will follow as a global model; part of the One Ford plan.

Expect the EcoSport to be powered by a 1.0 liter, 3-cylinder EcoBoost motor that has 120 PS and 170 newton meters of torque. For features, it's expected to have similar equipment as the Fiesta.

Jaguar may not be a high volume brand in the Philippines, but when they started bringing in the standout XF in 2008, we've been looking forward to each new Jag since then. They've given us the XJ too, but now it's time for the sportscar segment, as they're about to bring in the F-Type.

The F-Type is a hardtop roadster (coupe/convertible) and was constructed entirely of lightweight aluminum to keep the weight down. The 2-seat F-Type will come with two engine variants with different power outputs. Engine choices range include a supercharged 3.0L V6 (340 PS or 380 PS) as well as a supercharged 5.0L V8 that develops 495 PS. Both are mated to an 8-speed transmission  that drives the rear wheels.

The Range Rover has been fully redesigned and reengineered from the ground up, making it lighter, stronger, and more refined yet preserving the character of the brand. Engineers used an all-aluminium monocoque body structure, giving the new RR 39% less weight, as well as retaining the signature air suspension that RR has been known for. Land Rover claims the new suspension architecture delivers flatter, more confident cornering, with natural and intuitive steering feel.

The all-new Range Rover can be equipped with either a V8 petrol engine, a TDV6, or SDV8 diesel engines. The all-new 2013 Range Rover will be available in over 160 markets worldwide and will be on sale as early as September this year.

The Accord is another expected vehicle from Honda. The current model has been on sale since 2008, and the next generation model was recently launched in the United States.

The all-new Honda Accord has been improved in terms of of powertrains, suspension, electronics and outfitted with more safety features. Unusually, the Accord is shorter overall than the model it is replacing, but Honda claims they have generated more legroom and 30 extra liters of cargo capacity.

The ninth-generation Honda Accord lineup comes in either a sedan or coupe model and comes in a 4-cylinder, a V6, or a hybrid powertrain (in other markets) mated to a six-speed manual, six-speed automatic, or CVT gearbox.

The Accord gets as standard Active Noise Control (ANC) and Active Sound Control (ASC) systems on both 4-cylinder and V-6 models to counteract engine noise at high rpm. Standard features include redesigned seating, dual-zone automatic climate control and simplified controls and instrumentation.

Sources in HCPI say there is currently no word yet as to when exactly the next generation Accord will be brought in. Hopefully soon.

Revealed at the recent Los Angeles Auto Show, Porsche gave their fans and customers a glimpse of the future in the next generation Cayman.

The Cayman line is one of the youngest in the Porsche line up, having been introduced in 2005 as a rear wheel drive, mid engined sports car; a hardtop version of the widely successful Boxster line and a departure from the traditional rear engine, rear wheel drive layout of the 911.

The new Porsche Cayman is the third generation model, and has a lot of improvements with a longer wheelbase, an all-new chassis and a lower center of gravity. The Cayman, with the engine amidships, remains strictly a 2-seater, and features the latest in Porsche's interiors, sharing interior design similarities with the Panamera and the 911 (991).

Porsche will offers two flat six boxer engines in the Cayman; a 2.7-liter with 275 PS as well as a 325 PS 3.4-liter. As before, the new Cayman will get a six-speed manual transmission as standard with a seven-speed double clutch PDK transmission as an option. It now has Electro-mechanical power steering which replaced the previous hydraulic system of the Cayman designed to give the driver direct feedback.

The Cayman will arrive in March according to PGA Cars. 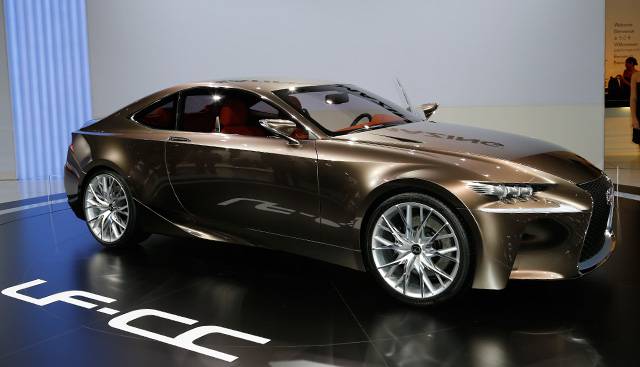 Lexus has had a great 2012 in the Philippines with the launches of their best selling models like the ES and spindled versions of their current models, including the new LS flagship sedan. For 2013, however, it is expected that the replacement for the all new IS sedan will break cover and be launched after years of development.

Lexus is currently preparing the IS Series for its official debut at this month's Detroit Motor Show (otherwise known as the North American International Auto Show). The new IS has been snapped in various forms of disguise, but it is known that it will share a lot of design cues with the LF-CC concept that Lexus revealed a while back, and figures the spindle grill prominently.

The IS is expected to be launched with a 2.5 liter turbocharged V6 in the IS 250, along with a naturally aspirated 3.5 liter V6 in the IS 350 with, quite possibly, an 8-speed automatic.

Comedian,TV host and avid car collector and enthusiasts Jay Leno got a taste of the IS at the Fuji Speedway, and comments that the upcoming model was set up to compete with models like the 3-Series directly in terms of driving dynamics. We'll have to wait and see how it performs.

We asked a few representatives of Toyota PH as to whether the next generation Vios will arrive this year and, well, the body language was all it took to give us a positive indication. Yes, the all new Vios will be here (and in the region) by the end of the year... fingers crossed, of course.

There are no official photos yet online with regards to the design of the all new Vios, though clues point towards a pair of concept cars revealed in Auto China 2012 called the Toyota Dear Qin Concept; both subcompacts in hatchback and sedan form factors.

Like the lack of official photos, there are also no official details as to the exact date of arrival nor the range of engines that will power both cars. If past generations of the Vios are any indication, the all new model will make its debut at the Bangkok Motor Show this March and still be powered by 1.3 and 1.5 liter VVT-i engines.

When we know more, you will too.

Nissan fans, 2013 might be the year for you. Just last year, Nissan debuted the next generation Sylphy at the 2012 Beijing Auto Show.

The Sylphy, as Nissan fans would know, was the basis for the Sentra Exalta in the early 2000s, while the current Nissan Sentra 200 sold by NMPI is imported from Mexico alongside the locally built Sentra (Sunny Neo). Confusing, yes, but perhaps the probable arrival of the B17 Sylphy/Sentra from either of Nissan's plants in Thailand or China could bring order to the Sentra's unusually confusing history of late.

The Sylphy features upscale styling and LED touches more akin to larger models in the Nissan line up, and gets a new range of 1.8 liter 4-cylinder powerplants, albeit with varying degrees of power and torque outputs.

The Almera (Tiida/Versa sedan) will be launched in just a few days' time, though the Sentra/Sylphy still hasn't been formally confirmed for this year, if it will actually make it. A source in NMPI, however, states that the all new Sentra/Sylphy could arrive by next year. Again, fingers crossed.

Here's one model that's sure to shake up the local industry when it comes out: the Mitsubishi Mirage sedan.

Based off of the recently launched Mirage hatchback, the sedan could very well change a big portion of the market. With advanced features, practicality, efficient 1.2 liter MIVEC engines and INVECS-III continuously variable transmissions, combined with the trunk space of a 3-box sedan, the Mirage 4-door could shake up the sales charts.

The Mitsubishi Mirage sedan will reportedly be revealed at the 2013 New York Auto Show in March.

MINI and French daredevil Guerlain Chicherit posted a teaser of their attempt at the world's first 'unassisted 360 degree backflip' in an automobile.

Peter Schreyer, the man responsible for Kia's design revolution, has now been appointed as the new President of Kia Motors Corporation, the first foreigner to assume the post.