Motorists, authorized dealers, and accessory shops have been making temporary plates of various designs (improvised, even) for nearly four years given the long-standing problems with regards to the supposed supplier of the official metal license plates. Some have even used temporary plate designs that even mimic styles from other countries such as Europe and Japan.

Well, it seems the fashionable temporary plate party is over.

AutoIndustriya.com has just been informed that the LTO, in a memorandum, has released official and sanctioned specifications for the conduction sticker-based temporary plates for motorists to use in lieu of their yet-to-be-released plates. The order also covers motorcycles, rebuilt or used imported motor vehicles. 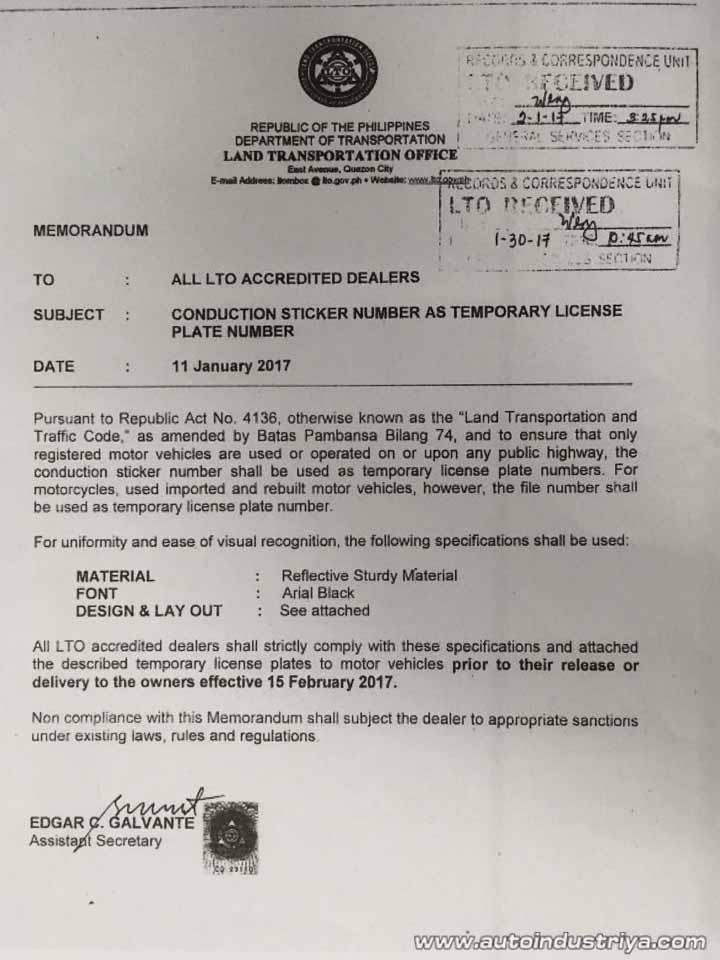 The two images (top and below) depict the specifications of temporary plates for motor vehicles and motorcycles, respectively. 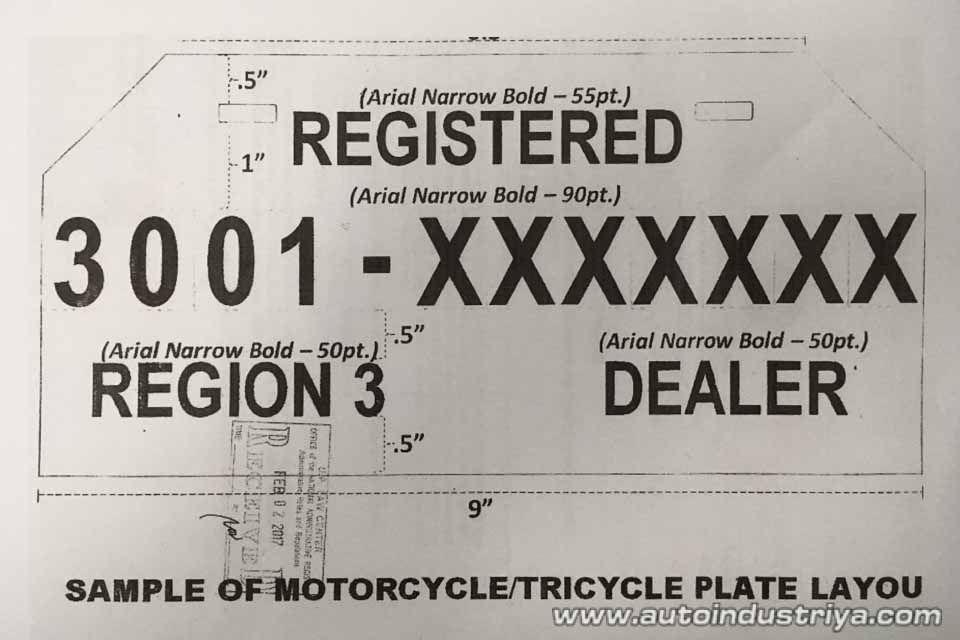 The conduction sticker (CS) number will still remain as the focal point of the motor vehicle temporary plate, though it also added the use of the word REGISTERED as well as the name of the dealership it was bought from. The LTO also ordered that the temporary plates will have to indicate the Region it was registered in (Region 3 covers Central Luzon, i.e. Bulacan) as well as the Motor Vehicle File Number.

The specs indicate the complete measurements of the said plates as well as spacing between the lines. The LTO even went so far as to specify the size of the font to be used, such as 160 point Arial Black for the CS number in cars and 90 point for motorcycles.

The document implies that the LTO's order was made to curb the use of unregistered motor vehicles given the agency's mandate under RA 4136, and specifically indicates the use of the Motor Vehicle (MV) File Number as the official basis for registration on top of the CS number.

Unlike Conduction Stickers, MV File Numbers are generated once a new vehicle is duly registered and encoded with the LTO. It is a clearer indication to the LTO and their partner agencies that all fees are paid and the bonafide owner has taken delivery of the said vehicle. Normally the LTO issues the computer-generated MV File Numbers after a week from the purchase date, though our source says the agency is claiming they can do it in three days.

In contrast, the Conduction Stickers (CS) issued by the LTO are intended for the transport of the vehicle from the port or point of manufacture to the dealer or retailer for sale to the public. A newly-sold vehicle with a CS can be legally driven for a week, provided that the owner has the authority issued by the LTO to do so. What that means is the CS is not actually a proof of registration.

The memorandum makes no mention as to who will bear the cost of manufacturing the temporary plates, though it is presumed that the dealer will have to, given that the order also states that dealers will be sanctioned for failing to adhere to the specifications.

This new memorandum will take effect on February 15, 2017.

Manila-Taguig expressway under evaluation by DPWH