Mitsubishi is giving the Strada a Montero Sport-style facelift

2019 Mitsubishi Strada is not just about good looks

With Mitsubishi establishing their brand identity through their new Dynamic Shield design, it appears they're bound to apply it to another hot-selling model in their lineup. Following the Montero Sport and the Xpander, their stalwart pickup will now receive the new face for its updated version.

Thanks to a few spy photos from Paultan.org as well as a rendering from Minkara, we get an idea of how the Strada will look like with its new face. We know that the Dynamic Shield is distinguished via thin headlamps that join into an X-Shaped grill with a chrome garnish and the triple diamond emblem on the upper half. This layout then pushes the turn signals and foglight array towards the far sides of the front fascia. Judging from what we can see on these photos, the updated Strada seems to follow these design cues to a tee much like the rest of Mitsubishi's lineup.

While most of the changes happen on the front end, the rear bed still clearly hints at the Strada's lines from the current model. The J-Shaped profile that splits the cab from the bed is still present, while the swooping lower profile of the bed itself lends towards making the Strada look a tad taller than it actually is. 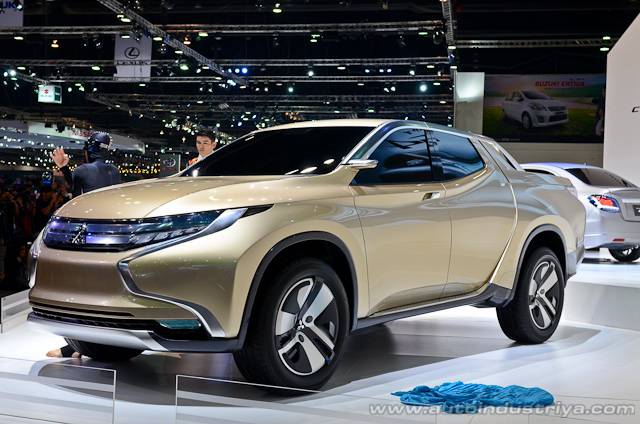 The dynamic shield face is not totally alien to the Strada, as it was originally previewed with one on the GR-HEV concept back in 2013. Somehow, the company decided on a different strategy when they unveiled the production version.

Details on release dates and technical specifications have yet to be mentioned for the Strada, but considering that the current generation has been on sale since 2015, it's safe to say that the Strada is ripe for an update very soon.

2019 Mitsubishi Strada is not just about good looks