Toyota's currently most anticipated model is possibly the all-new Supra, which will be making a comeback after its discontinuation more than a decade ago. The new Supra has already been in development for over a year, and is likely to be released soon. However, the Supra may not be the only sports coupe making a comeback as a recent trademark filing by Toyota hints that the Celica could return as well.

Looking up 'Celica' in the U.S. Patent and Trademark Office (USPTO), one would see four results with only two of which being filed by Toyota. One is for the original USPTO trademark filed in 1973, which has expired. The other trademark was filed more recently by Toyota on August 31, 2017, hinting at the sports coupe's possible return. 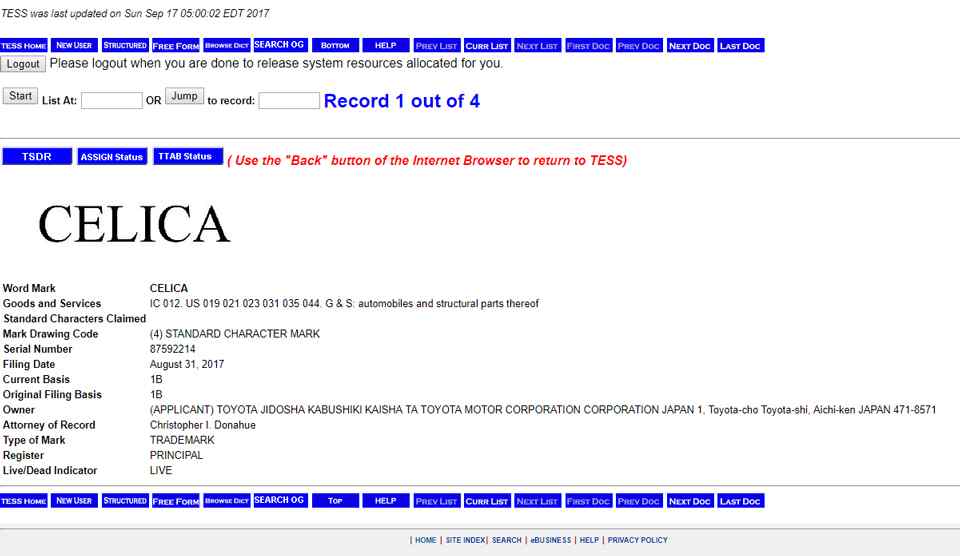 Like most patent filings, it is possible that the Celica will not see production, and was made to ensure that Toyota keeps the name of the Celica. However, the filing does show that Toyota is interested in reving another one of their sports coupes.

If it does see production, the Celica could be joining the Supra and the 86 as part of Tetsuya Tada 'Three Brothers' plan of Toyota having three sports cars. Prior to the discovery of the Celica trademark, there were also reports of an MR2 successor earlier in the year which Toyota has to either axe or make space for another sports car.

With no other information apart from the trademark filing, it is uncertain what platform or drivetrain the new Celica would have if Toyota does push forward with its production.