Report: Lamborghini's first crossover will not get V12 power

Lamborghini to expand factory in preparation for Urus production

The House of The Raging Bull is indeed serious in getting into the high-end crossover segment. What you're looking at right now is the first image of Lamborghini's upcoming Urus crossover in prototype form. First revealed as a concept at the 2012 Beijing Motor Show, the high-riding bull from Lamborghini features a very distinct exterior design while still retaining the key styling cues from current models such as the Aventador and Huracan.

Taken by a fan of Carpix, the front fascia of the Urus prototype slightly differs from the Urus concept. Instead of having sharp headlights, the prototype gets smooth-shaped units. The front side air intakes are somewhat similar apart from the center intake which has been made larger. It's nice to see, however, that the disntict shape of the original concept has made its way in the camouflaged prototype. Also seen are the flared rear wheel arches which gives the Urus a wider stance. No images of the rear were taken but based on another photo taken in Denmark, the camouflaged crossover gets heavy styling cues from the concept. 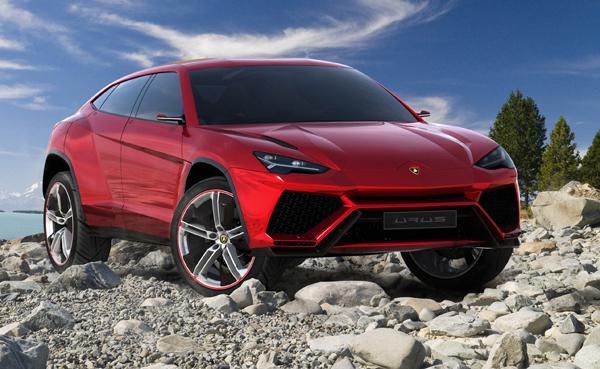 Apparently, the Lamborghini Urus will be underpinned by Volkswagen's MLB-Evo platform which is also used by the Audi Q7, Bentley Bentayga and the upcoming 2018 Porsche Cayenne. Other than that, it will supposedly be powered by a 4.0-liter twin-turbo V8.  There are no reports if the Urus will come with a V12 option but all models will have all-wheel-drive.

The company officially announced that they were going to build a new crossover back in May 2015. Then Lamborghini CEO, Stephan Winkelmann, said that the new crossover signifies the company's sustained growth and that it also means the beginning of a new era for the House of The Raging Bull. The Urus will be produced at the company's Sant'Agata Bolognese facility as they plan to expand it from 80,000 square meters, to 150,000 square meters. The expansion will see the Lamborghini build a new production line, bigger storage areas and a larger research & development (R&D) facility. The automaker also estimates that the upcoming production of the Urus will produce 500 new jobs.

Production of the all-new Lamborghini Urus will reportedly begin in April 2017, which could mean that the first production models will arrive in 2018.

Hot on the heels of a record-breaking 404,051 units sold in the Philippines last year, CAMPI/TMA members start 2017 strong with 30,425 units sold in January.

Report: Lamborghini's first crossover will not get V12 power

Lamborghini to expand factory in preparation for Urus production