Timeless Beauty: The Cars of the Fullerton Concours D' Elegance in Singapore

It is hard to talk about the Philippine auto industry without relating its performance to that of its Association of South East Asian Nations (ASEAN) neighbors. The auto industries of countries like the Philippines, Thailand, Singapore, Malaysia, Indonesia, Vietnam and Cambodia are often very delicately intertwined.

Our auto industry is quite closely tied to fellow ASEAN member, Singapore. The country is home to the regional offices of many automotive brands. In addition, its vastly different laws give us a glimpse of how vehicle ownership and traffic can be adequately controlled with the right political will. As such observing the Singapore Motorshow can serve as an ideal crystal ball for cars to expect in the coming year as well as some we can only wish for.

This year’s motorshow was held last Jan. 12 to 15 at the Suntec Singapore Convention & Exhibition Centre. The event featured some 200 vehicles on display with 16 of them new models. And while some of the brands there, like Citroen, DS, Infiniti, and Renault have yet to arrive in the Philippines, there’s still a strong likelihood of seeing many others arriving soon.

With weather quite similar to the Philippines (either really hot or wet) it’s not surprising to see that Singaporeans enjoy convertibles on the few days of perfect weather just as much as we do.

There was quite the selection of droptops on display ranging from typical coupes to more unusual executions.

Easily a scene-stealer was BMW’s M235i Convertible. The sporty four-seat convertible can lose its top in just 25 seconds and can do it up to speeds of 50 km/h. The fabric soft-top is stows in the boot and is very compact, decreasing its trunk space from 330 liters with the top up to just 280 liters with a top down. Best of all, a 3.0-liter turbocharged six-cylinder propels it to 100 km/h in just 5 seconds.

Perhaps the last carmaker we expected to offer a convertible made their presence felt. Range Rover’s Evoque Convertible made its debut in Singapore while still keeping everything you expect of a Range Rover —high ground clearance and 4WD system to go off-road. The roof can quietly go down in 18 seconds at speeds up to 46 km/h. It’s powered by a 240-hp 2.0-liter turbo that’s paired with a nine-speed automatic. 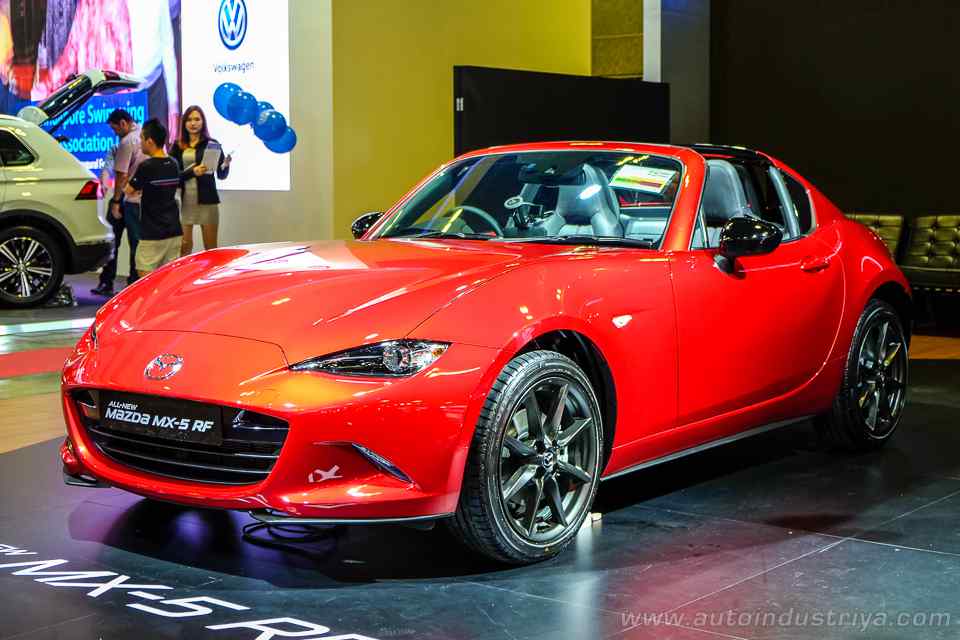 Nonetheless, what really got us salivating was the Mazda MX-5 RF. The RF stands for 'Retractable Fastback' and allows the driver to enjoy the car as a hardtop coupe or a targa (also known as a T-Top). The roof is stowed at just the push of a button and can be done up to speeds of 10 km/h. The roof panel only takes as much space as the convertible's mechanism. Providing power is the 2.0-liter SkyActiv-G inline-four that pushes out 160 PS and 200 Nm of torque. Available transmissions include a 6-speed manual and a 6-speed automatic.

Thanks to legislation that is more forgiving for alternative fuel vehicles, hybrid and electric options abound in Singapore.

Having stepped up the style and luxury of its current models, Kia is also readying its contender in the hybrid arena in the form of the Niro. It’s Kia's first dedicated hybrid model in crossover form. Kia decided to give it a more macho and sleek form instead of the typical hybrid look. Under the hood is a 1.6-liter GDI inline-four accompanied by an electric motor packing lithium-ion batteries. Its 148 PS along with 264 Nm of torque runs through a dual-clutch automatic. It is all-wheel drive with the gas engine providing traction to the front wheels and the electric motor sending drive to the rear wheels.

Hyundai has a green vehicle too, in the form of the Ioniq. The green vehicle comes in three forms: electric vehicle, hybrid, and plug-in hybrid. The vehicle’s flexible design allows it to be fitted with a variety of engines and battery packs. It can be fitted with a large 120-hp electric motor and go as far as 200-km on one charge. Or it can pair a 1.6-liter GDi engine with an electric motor to achieve average fuel consumption figures of 20 km/l. It’s already available in some Asian countries but could take some time and legislation before it’s offered in the Philippines.

With the right to own a vehicle in Singapore quite hard to begin with, it’s not surprising that family cars were quite popular at the show.

Subaru led the charge with the unveiling of the all-new Impreza, riding on its new Global Platform which will underpin new vehicles. Subaru Singapore offers the vehicle with a choice of 1.6-liter or 2.0-liter powerplant as well as in sedan and hatchback body styles. There’s also an STi Performance kit already being offered for both.

Formerly exclusive to Japan, Toyota’s little seven-seater has recently been made available in our neighboring right-hand drive countries. The Seinta is a mini-MPV, and if imported to the Philippines could start a fierce battle with the Suzuki Ertiga and Honda Mobilio. Like its competitors, it’s based on Toyota’s small hatchback, the Yaris. It’s powered by the same 1.5-liter engine and CVT transmission. What makes it stand out is the futuristic hybrid-like design as well as its power sliding doors on both sides.

Besides the exciting vehicles on display, the Singapore Motorshow also featured a Russ Swift Stunt Show twice a day, much like that offered at the Manila International Auto Show. This time however, Russ, is already putting the just-released new Impreza through its paces.

Virtual reality (VR) seemed to be preferred medium to show off vehicle features this year with several automakers using the technology. Audi employed a unique walking VR experience while Hyundai had VR gear and other interactive activities for visitors to learn more about its new products.

The Singapore Motorshow certainly provided an interesting glimpse into Asia’s smallest yet most competitive auto market. Despite sales being dominated by European brands, the aggressive promotion by the Asian brands certainly show that the fight is far from over.

The 33rd Thailand International Motor Expo opened the doors to its show floor featuring 3 concepts and several launches of the latest vehicles.

Timeless Beauty: The Cars of the Fullerton Concours D' Elegance in Singapore