First unveiled as a concept car in Frankfurt during 2007, the Suzuki Kizashi has arrived in the country. This sporty vehicle from Suzuki has broken into the local D-segment scene during the second quarter of the year as their biggest and most powerful car yet, showing that Suzuki can take a bold step out of their comfort zone of compact and economical vehicles.

The Kizashi was brought in by Suzuki Philippines to break out into a new segment in their model lineup, aimed to  cater to those who want a bigger sedan. It will be taking on similar executive class market vehicles with fellow Japanese models like the Camry, Accord, Mazda6 and even the Subaru Legacy. But based on its dimensions, the Kizashi is a little bit on the small side, positioning itself (size-wise) between the C and D segments. Its features and engine displacement, however, brings it up back to the D-segment.

So, what's there to expect from Suzuki's new flagship model?

If you've seen one already and thought that it was heavy and sluggish, you're not alone. Its oversized exterior features like its front grille, head lamps, bulky wheel arches and tail lamps sure do make it appear bigger than it really is. Its dual tail pipes and 17-inch wheels give a hint of what to expect from the drive though. As big and bulky as it seems, it's still a tad smaller compared to its competitors but its size doesn't take much out of its premium feel, and still give the car commanding presence on the road.

The Kizahi's interior is a bit bland though; we think Suzuki might have scrimped on the interior for them to be able to price the Kizashi competitively. To start off, its seat material is made out of fabric, but they have compensated for it by making its color beige, making it somehow look more luxurious. If your Kizashi's body color is white or silver , then you'll automatically get a black interior. It also has some premium features that you won't expect from its price range like the comfort access key, keyless push start and stop system, and six airbags. Aside from that, you'd get what most D-segment vehicles within the same price range have like a dual-zone cooling system for the front and dedicated air-con vents at the rear, a decent entertainment system, ambient, foot-well and puddle lighting. Seating capacity wasn't compromised with more than enough elbow room on the front seats while the rear seats can accommodate 3 average sized adults comfortably. 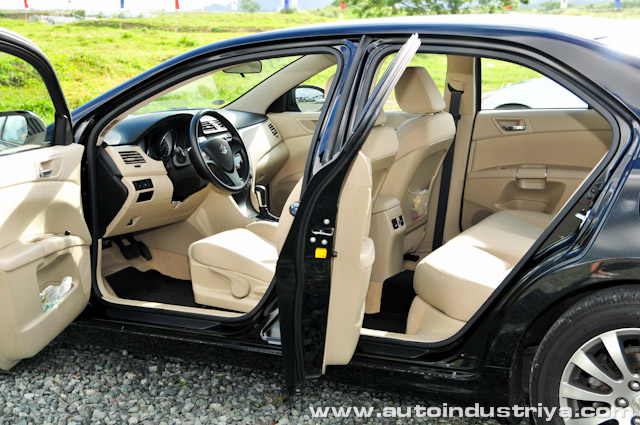 The Kizashi is powered by a 2.4-liter VVT engine that drives the front wheels via a continuously variable transmission which gives it smooth driving characteristics. You can also opt to use its 6-speed manual mode for that sporty feel,  especially since its shifter resembles a traditional sequential type of manual transmission where you pull the shift knob to move up to a higher gear and push the knob forward to shift down. Many other models have it the other way around.

Maneuvering the Kizashi around the metro wasn't bad at all even considering its size. Its power was more than enough for stop and go traffic, although our usually dense city traffic on a 2,393cc engine tends to bring down the fuel economy to a range of 6-7 km/l with a total of four people inside. On the highway though, you can appreciate the engine's power more and makes occasional overtaking on the highway a breeze, although a cruise control feature would be welcome as an upgrade to future models. The ride is very stable and quiet due to the sound insulators installed around the car, effectively suppressing external noise making it ideal for the executive class market. Suzuki also takes pride on the ABS equipped in the Kizashi as it is supplied by Akebono Brake Corporation, the same company that provides similar components for Japan's famous bullet trains. Highway driving on the Kizashi yielded a better fuel consumption with 9.8 km/l with the same number of people on board.

Priced at PhP 1,288,000, some people find the pricing of the Kizashi unusual, as it is a bit steep for the C-segment but affordable for the D-segment. All considered, it's fairly reasonable because the Kizashi is manufactured and imported from Suzuki's Sagara plant in Japan as a completely built unit (CBU). Not only that, it is also taxed more by our local government since it has an engine displacement below 3.0-liters, excluding it from the JPEPA tariff reduction scheme.

Still, the Suzuki Kizashi fills that gap between executive and compact family car, broadening the market a little bit more for Philippine customers.

We've driven the Toyota 86 during the Area 86 launch part last June. However, this time it's different. This time, we're not on an open airport apron

Last year, we got a chance to sample the then all-new Ford Explorer with the 3.5 liter V6 engine.