For the past couple of years, car manufacturers have launched their respective challengers for the compact urban crossover segment in the Philippines. Among these vehicles is the Kia Soul, which was first introduced in the country last 2009. Now on its second generation, the Soul gets a number of interior and exterior enhancements but one thing remains the same – its boxy body.

At first glance, the Soul’s front end looks sleeker compared to the previous model. Up front, it gets a revamped bumper, redesigned headlights, new turn signals and a restyled trapezoidal lower grill.

In terms of size, the 2015 Soul looks larger thanks to the 14mm increase in width and 20mm longer wheelbase. Moreover, Kia seems to have sent the Soul to the gym due to the vehicle’s bulkier fenders which makes the vehicle bigger.

When viewed from the side, black detailing can be seen on the Soul’s pillars, exterior mirrors and front fenders. It also has a smoother and more refined design compared to its predecessor. I just wished that Kia gave this Soul a sleeker-looking set of alloy wheels. 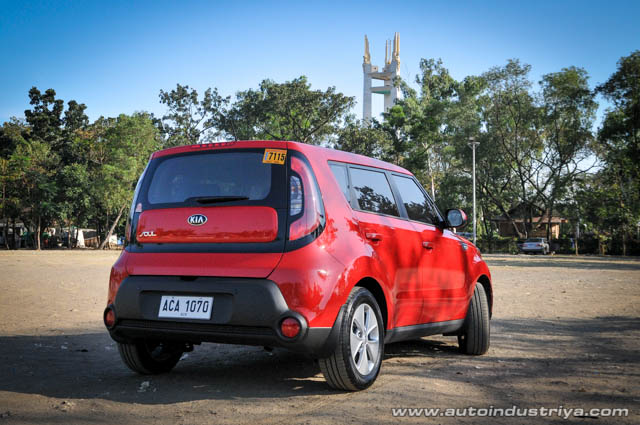 Design changes continue to be seen at the rear of this second generation Soul. It has longer taillights, larger bumper and a slimmer roof-mounted third brake light. The rear of the vehicle also comes with black detailing as well as an ‘invisible’ tailgate handle placed above the bumper. 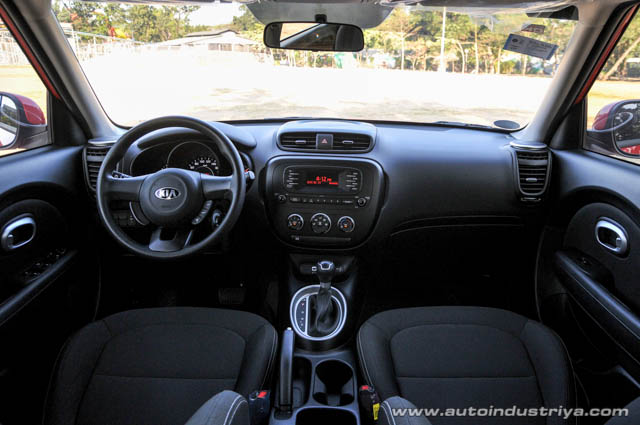 The 2015 Soul has a minimalist interior and Kia made use of a circular theme by incorporating it to the instrument cluster, to the gear shift and to the air conditioning dials. It also has a three-spoke steering wheel without audio controls as well as ventilated front seats. Of note is the absence of a center armrest for the driver which was available in the previous model. Kia should have fitted this Soul with a center armrest for ergonomic purposes which would be useful during long drives.

It is spacious and can easily accommodate five adults. It also has a generous amount of leg and headroom given that this Soul is a subcompact crossover vehicle. In terms of baggage compartment, it has 354 liters of trunk space when the rear seat is up while 1,367 liters when the rear seat is folded. 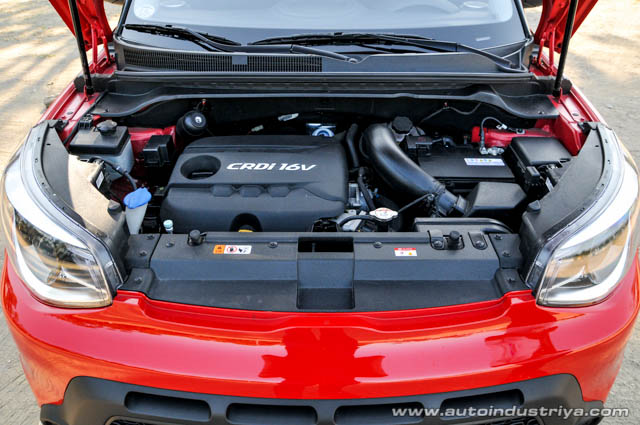 Powering this 2015 Soul is Kia’s 1.6-liter in-line four CRDi diesel engine that delivers 128 PS at 4000 rpm and 260 Nm of torque at 2750 rpm. It is mated to a six-speed automatic transmission and comes with a variable geometry turbo (VGT). The current 1.6-liter engine fitted to this Soul produce an increase in power output by 4 PS and 104 Nm.

In terms of performance, this Soul didn't disappoint. Driving through the busy streets of the metro posed no problem due to its light handling and agility. Changing lanes and weaving around tight roads can be successfully done with ease and confidence. Indeed, this Soul can play around in the urban jungle.

I also got the chance to drive this boxy crossover in up and downhill roads. As expected, the vehicle’s VGT kicked in and helped the Soul tackle the up and down terrain without a sweat. Power and torque pull can be felt even though you’re just at the 2000 rpm mark.

Moreover, this Soul can absorb the punishment brought upon by the dilapidated city roads. Yes, you can still have your world rocked when you missed a pothole but this vehicle does a good job in minimizing the impact. In terms of fuel economy, I was able to yield an average of 12km/l under moderate traffic (16 to 20 km/h).

When it comes to the open highway, this boxy crossover continues to deliver the goods. First, the noise of the diesel engine is not too loud while cruising at the prescribed speed limit. Perhaps Kia’s CRDi does the trick in minimizing the engine noise. It also shifts fast and smoothly, giving you the right amount of power when you want to pass the vehicle in front.

With all these qualities, I felt that I was driving a sedan rather than a crossover because of the Soul’s agility, quickness and lightness. In terms of consumption, this Soul’s fuel economy improved to 14 km/l while cruising at 100 km/h.

Overall, the Soul is a fun car to drive due to its nice handling and decent power. However, one obstacle remains to be conquered – the Soul’s price tag. As of this writing, the 2015 Kia Soul LX variant is priced at PhP 1,020,000. With that price, the 2015 Soul isn’t as convincing as some larger and better equipped crossovers that are positioned in the same price range.

Can the new generation Mazda3 2.0R sedan restore the old luster of the compact class?