Entry-level and mid-range models tend to outsell their ‘fully-loaded’ brethren as some buyers only want the bare necessities when purchasing a brand new car. One of the few models that we’ve seen gaining in number on the road is the Ford Escape, particularly the base model SE.

2015 saw Ford Group Philippines (FGP) make their return in the compact crossover segment with the arrival of the third-generation Escape. Now sourced from the US as ‘completely-built units’ (CBUs), it now has a sleeker exterior, more car-like cabin and EcoBoost powertrains.

In truth, the relatively new Escape has been available in other markets since 2012 as the Kuga (originally designed by Ford of Europe). It shows with 2015 Escape's Euro-inspired aesthetics. 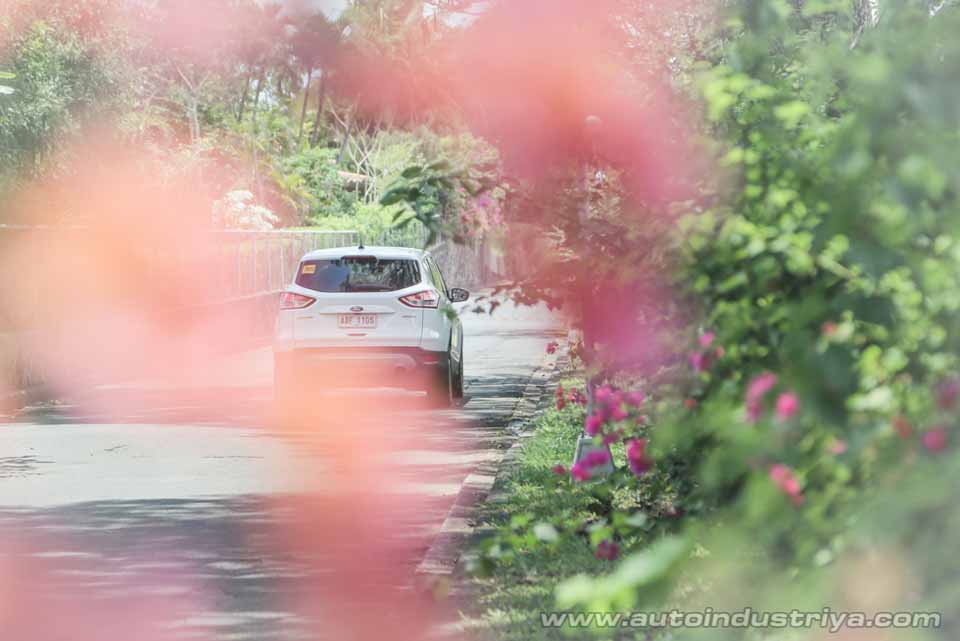 What looks to be a conservative design is actually just right in my opinion. It has a mix of both aggressive tones and clean lines. The front fascia has sleek wraparound halogen headlights that are accented by the foglights, large bumper intake and clamshell hood. Styling cues from its platform sibling, the Focus, are clearly seen on the crossover’s profile. The side glass windows with the striking chrome trim will always be a peculiar touch, as well as the defined wheel arches. The entry-level SE has smaller wheels, but the 17-inch alloys still gave the Escape a nice finish.

Around the back, the fender-wrapping taillights and wide glass area dominate the rear of the crossover. The tailgate itself has a straightforward design and provides a clear view of what's behind the car. Backing up towards tight parking spaces is a no brainer as the Escape SE comes with a reverse camera. It is displayed, however, on the small 4.2-inch display which some drivers may find too small for making slight adjustments during reversing. 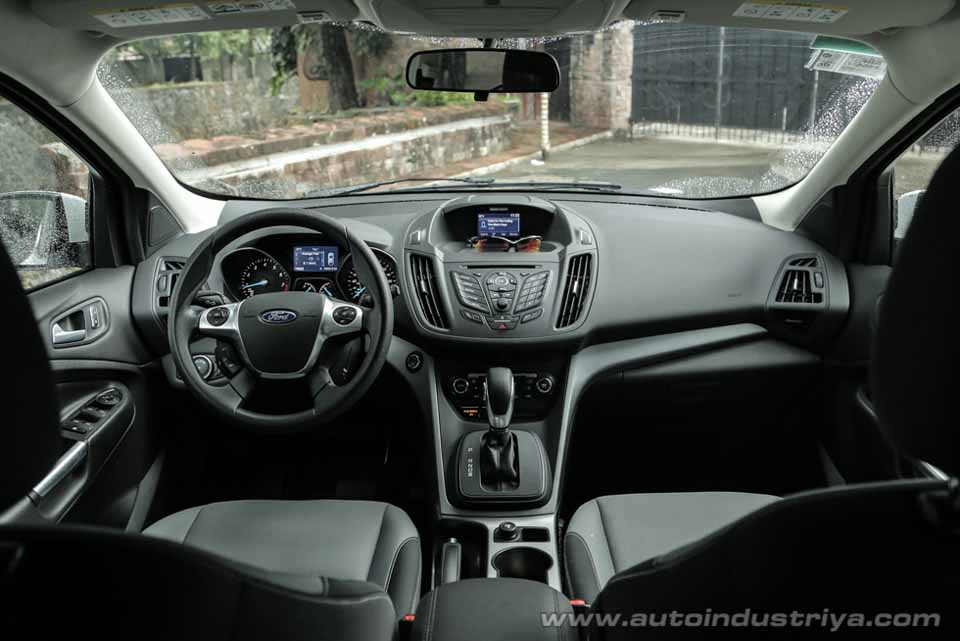 Open the doors and immediately apparent is the extensive use of soft-touch plastic. It does not get the piano black trim from the more expensive Titanium model, but for once, I like a crossover that doesn't have shiny bits and bobs. The front seats are comfortable, though a bit more side support would have been better. I particularly like the MPV-inspired gear lever. It’s easy to reach and allows for easier and comfortable gear-changing in my opinion. The rear bench has decent legroom and the backrests can also be adjusted. Passengers at the back will be glad to know that it even comes with privacy glass as standard.

Trunk space on the Escape is very generous as it will swallow cargo easily. By our estimate, it can fit several coolers, bags and other equipment with ease, just be mindful of the car's cargo carrying capacity. If one would treat it as a cargo hauler, the bench seats can be folded to allow more luggage space.

A base model it may be, but it still packs loads of standard features. For starters, the driver's seat can be electronically adjusted and comes with adjustable lumbar support. Automatic climate control also comes in as standard, while the rear occupants have their own set of vents. It also has a multimedia system courtesy of SYNC by Microsoft. It's the older version of the system, but supports AM/FM radio, CD, Bluetooth, MP3, Aux and USB.

A telescopic steering rack also makes its way into the Escape SE, allowing for plenty of levels of height and reach adjustments. The steering wheel is made from urethane but has the necessary controls for the audio system, multi-information display and cruise control. 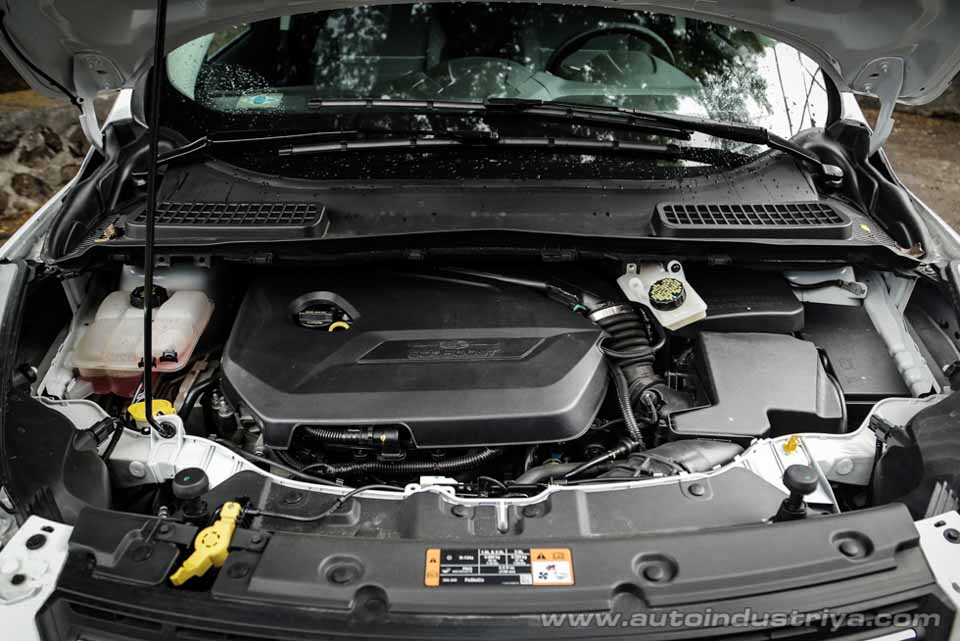 Propelling the SE model is a 1.6-liter EcoBoost inline-four. Generating 178 PS at 5,700 rpm along with 249 Nm of torque at 2,500 rpm, this Escape can easily outpace other similarly-sized crossovers and even bigger engined vehicles. What it lacks in displacement, it makes up for with direct-injection and a twin-scroll turbo system which allows it to have loads of power from such a small package. Managing all that power is a 6-speed automatic gearbox that drives the front axle.

It is not as powerful as the bigger 2.0-liter EcoBoost, but the smaller engine still delivered loads of low-end torque. Prod the throttle down and the Escape easily gains speed, but not before having to deal with a bit of turbo lag. In spite of that, the engine still performed like a bigger 2.5-liter engine and did not feel strained.

Sitting on the same platform as the Focus, the Escape swept through the bends admirably. A hint of body roll was still apparent to remind drivers that it has a high center of gravity but nothing too concerning. And compared to the Focus which had a stiffer ride, the Escape had a loftier ride and is actually a delight for cruising long stretches of road. The electronic power-assisted steering (EPAS) system was also good. It felt light on slow traffic and gradually stiffened up when at highway speeds.

When it came to gripes, there were a few things that needed attention. The pedal placement is a bit too near for my liking. Manually changing gears with the integrated +/- buttons felt unintuitive, and like the Focus, there is a noticeable delay in switching cogs. For me, nothing beats a traditional gated function or paddle shifters when it comes to manually changing gears on an automatic or dual-clutch gearbox. 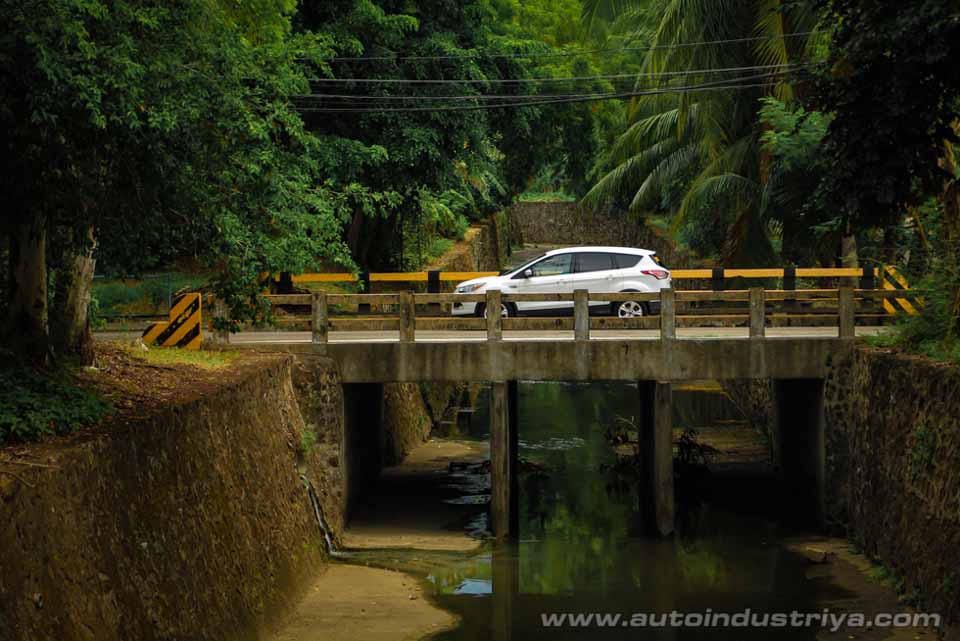 Over to fuel consumption, the Escape did great on the highway as it was able to average about 15.3 km/l. On normal city traffic, it dropped down to about 9.0 – 9.3 km/l which was acceptable. It was only in heavy traffic that the figures nosedived to 5.8 – 6.3 km/l. Again, like the Focus, it’s a stellar highway performer, but has high fuel consumption when stuck in traffic.

Priced at PhP 1,490,000, the Escape SE is certainly quite the contender in the entry-level compact crossover range. Sure it may be priced a bit more than say, a Mazda CX-5 Maxx, Toyota RAV4 Active, Kia Sportage EX or Nissan X-Trail 2.0, but it comes with added features that some of the competition lacks.

Some might say it does not have daytime running lights, a power tailgate, sunroof, touchscreen infotainment or HID headlights. That’s not the point. Here is a well-equipped crossover that will easily perform its daily duties to the letter. It’s practical in terms of size, performance and equipment. It has the basic essentials of a 5-seater crossover, but happens to have a bit of extra features.

Toyota's smallest hybrid offering gets a refresh, and quite a lot more

Lexus goes the bold route in creating its long-awaited but not so easily dismissed large sport sedan, the GS F.