When Ford Philippines closed their factory in Santa Rosa back in 2012, there was one integral model that the market had to do without: the Ford Escape.

It's a key model for Ford particularly in a country that seems to have fallen in love with the crossover, and why not? A vehicle that marries the comfortable and driving manners of a car with the looks, versatility, ground clearance and size of a sport utility vehicle is ideal for these challenging streets.

Closing the factory at the end of 2012 meant shutting down the assembly and sales of the aging but (then) strong Escape. Now it's time for a comeback for Ford's compact crossover and, dare we say, what a return it is.

Strictly speaking, this Escape isn't actually an entirely new model for 2015. The reason for that is because this generation of Escape is has already been around in the United States and other markets as the Kuga since 2012. In fact, the Escape that Ford Philippines is bringing in is actually from the US. 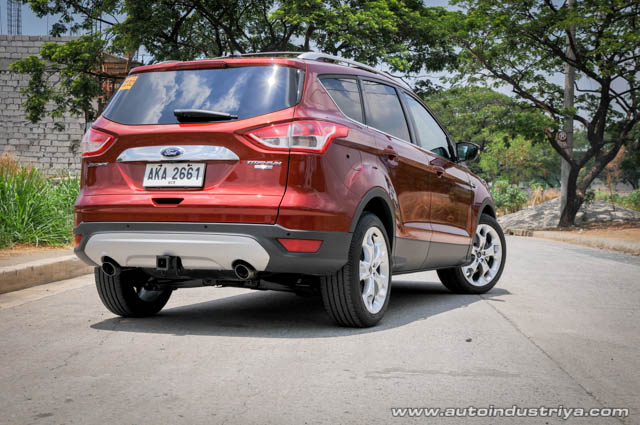 The design may be three years old, but the Escape surely doesn't look it; actually if anything, the Escape actually looks newer than many of its contemporaries. The front is clean and rather mean with those headlamps, the cuts on the hood, the large air intakes on the bumper and other details. The Escape has a good stance with the front end poised towards the road and with 200mm of ground clearance. The wheels look great too. The rear is likewise clean and crisp, rounding out the design of this top-spec Escape Titanium.

The interior is definitely more modern functional rather than modern luxury, and that's perfectly fine. There are no wood panels or bits here, faux or real; instead what you get is a clean mix of black and gray, piano black accents and polished metal trim. The cabin itself is primarily done in cream/off-white from the leather upholstery, door panels and ceiling; the latter opening up with a touch of a button to reveal a panoramic glass roof. 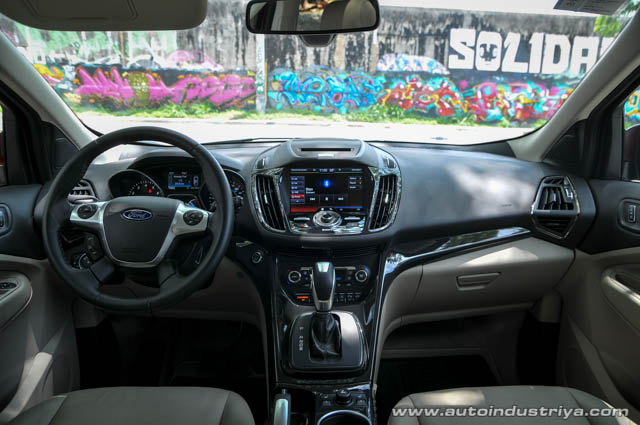 Settling in the driver's seat and fiddling with the features is when it becomes clear that Ford really threw in everything along with the kitchen sink in this Escape. There are buttons all around, controlling everything from the windows, the drive computer (fuel, odometer, range, etc.), the automatic climate, cruise control, audio and much more. Even the main LCD is a touch screen and controls most of the vehicle's primary function. Perhaps there are enough buttons to get a bit of overload, but thankfully there's the latest version of Ford Sync so the driver can activate certain functions by voice like playing a certain track on a connected iPod or dialing the wife. That last one will certainly come in handy.

What's really interesting is what is at the heart of the new “generation” Escape that Ford Philippines is bringing in. Unlike before when the Escape had either a naturally aspirated 2.0-liter, a 3.0-liter V6 and later on just a 2.3-liter inline-4, the new Escape comes with just a 1.6 and a 2.0, but with a twist: they're both EcoBoost. 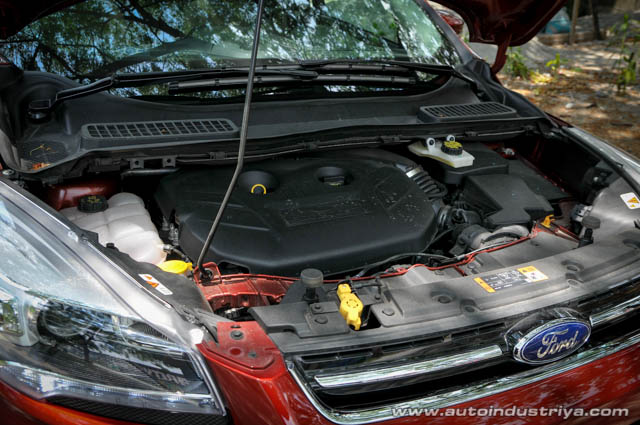 Powering the 2015 Ford Escape Titanium is a 2.0L EcoBoost Inline-4, or the same engine as the Explorer EcoBoost. What that means is this crossover, thanks to direct injection, variable valve timing and turbocharging, gets a total of 240 PS at 5500 rpm and 366 Nm at 3000 rpm. To put that in perspective, the power and torque of this Escape pits it squarely against, well, the Subaru Forester XT. This should be very interesting.

In the city, this Escape Titanium drives very nicely. Visibility is good, maneuverability is good and the size doesn't feel cumbersome to drive in tight streets. The urban driving scenario does bring up some points for improvement. Noise suppression is decent but could be better, as the sound of loud motorcycles can get through. The ride of the suspension is good though the seats could use a bit more plushness.

What's interesting is how smoothly the transmission behaves. If you've driven the current Focus or Fiesta, you'll know that the dual clutch gearboxes (PowerShift) can be quite tricky to drive smoothly in urban stop-and-go traffic. Such is not the case for the Escape as Ford opted for the more comfortable and conventional 6-speed SelectShift automatic, doing away with the jerkiness of dual clutch transmissions.

The gearbox, while a conventional slushbox automatic, results in some decent fuel economy. In the city, the Escape yielded 7.6 km/l in moderate traffic (24 km/h average). On the highway it's better at 12.1 km/l at an average of 95 km/h. It's best to keep in mind that this is a turbo, so the best economy can be achieved if it's driven sensibly at around 2000 to about 3000rpm. Once the turbo is fully spooled up, fuel economy can drop quite quickly, so a light right foot is needed.

Hit the open road and the Escape Titanium delivers. Off the line, the Escape can really squat under full acceleration. 240 PS and 366 Nm are figures not to be taken lightly; it even has more torque than the Forester XT. By my own timer, the Escape dusted off 100 km/h in 7.7 seconds from a standstill. It's got speed and quickness, but of course its best to keep it within reasonable (and legal) limits.

Handling on a mountain road is good, as Ford definitely worked on generating a balanced crossover. It's no Focus, but the brakes are matched well for the size and weight of the Escape and the suspension and chassis stiffness offers a good, measured drive. The Subaru's all-wheel drive system still takes the cake, but this Escape's 4WD system isn't that far behind.

The 2015 Ford Escape rejoined the Blue Oval in the Philippines during a time of record sales for the company, and almost completes the global line-up of sport utility vehicles of Ford, all of which are selling strongly. The EcoSport is defining its class, offering unparalleled value for subcompact prices. The Explorer is the most popular one in its category, even when faced with the JPEPA contenders. The Expedition has just undergone a refresh and upgrade. The new generation Everest is already on its way in. The only Ford SUV the Philippines doesn't have is the Edge, but the Escape does very well to slot into that highly competitive gap between the EcoSport and Explorer.

The drive, the design, the value and the overall feel of the overachieving 2015 Ford Escape Titanium means that the Blue Oval has a contender in the upper echelons of the compact SUV category with some serious potential.

Can the new 2015 Mazda2 deliver the promise? We think so.

Honda Cars Philippines gives us the Odyssey's Asian cousin. Let's see how well it does the job.