I can already sense that disconcerting look. What could this B-segment hybrid deliver besides astounding fuel economy? Quite a lot actually.

Thinking that the standard Prius is too big and pricey for some prospective buyers, Toyota decided to stick their Hybrid Synergy Drive into a smaller, more affordable platform. Enter the Prius C, a smaller hybrid that combines Prius technology on a chassis derived from the Yaris.

The Prius C may have been refreshed in 2015, but the changes made are still carried into the current year model. Toyota refined the look of Prius C and fitted it with a new infotainment system and new cabin trim. We’ll get deeper into that later, but first we begin with the exterior revisions. 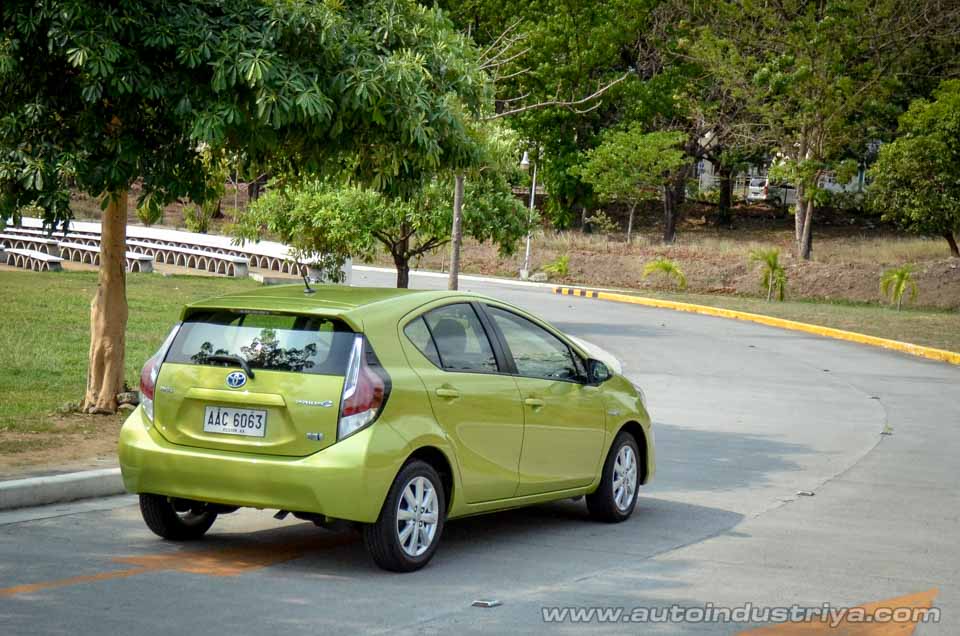 Not a lot has been changed on the Prius C’s design save for a few minor tweaks. The headlights have been reworked and feature a clearer finish. Completely new to the Prius however are the following: the large hexagonal grill, the sleeker front bumper and redesigned foglight/turn-signal housings. It still sits on the same 15-inch alloy wheels but the rear section does benefit from an updated taillight cluster with black borders.

Giving the Prius C a bit of pizazz is a new color option called Yellow Mica Metallic, a bright shade that was able to turn heads around the city. Overall, the slight makeover does give the Prius C a fresher look. I just wished they replaced the wheels which look a lot like the ones used on the Yaris or Vios.

The cabin carries the familiar design from the pre-updated model which I particularly like. Hard plastic was still used throughout the interior though Toyota managed to make it look more upscale. Also present are piano black trim pieces which were applied on the power window switch panels, the center console, the infotainment system and the aircon vents.

The old 2-DIN audio system has been bumped off in favor of the locally-sourced AVT touchscreen infotainment system. With it, features like Bluetooth and GPS Navigation are now available in the 2015 Prius C. Also getting a slight update is the automatic climate control system and multi-information display. Both get a digital TFT screen which looks better than the previous LCD. Bearing the Full Option package, it gets leather upholstery on its seats, steering wheel and instrument panel along with power-folding side mirrors. 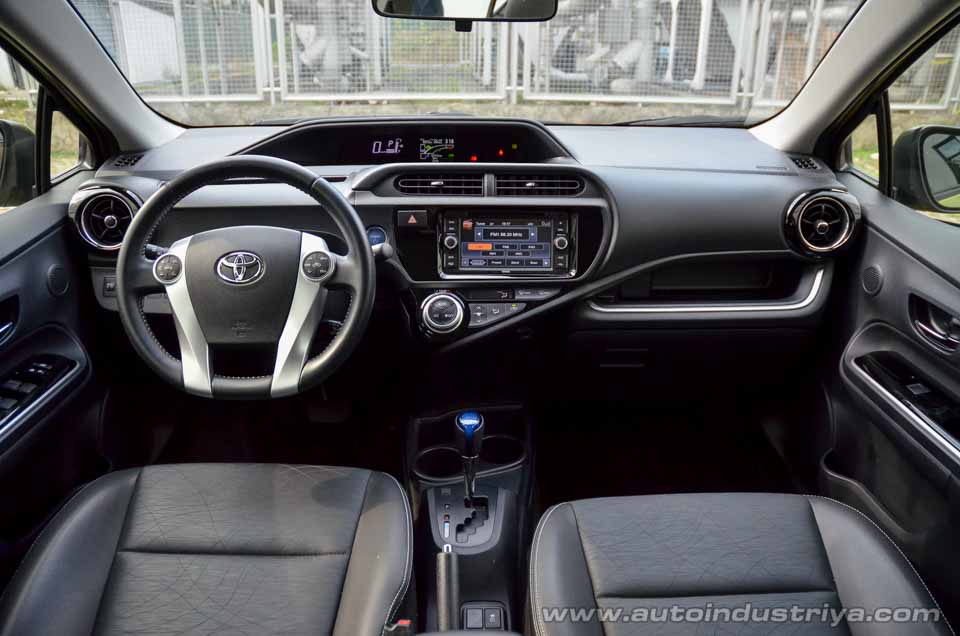 There could have been more improvements to make the cabin of the Prius C better. For starters, the uniquely-shaped 4-spoke steering wheel does not feel as natural as I would prefer. The limited height adjustment of the steering wheel also meant that some drivers may hit their knees while turning the wheel. The rearview mirror offers good rear visibility but I did notice it blocked a portion of my right side vision which is a concern. The speakers produced rather tinny audio and the resolution of the AVT system could be better.

Providing power is the 1.5-liter Atkinson-cycle 1NZ-FXE inline-four that is helped along by an electric motor with an integrated nickel-metal hydride battery. The engine is a carry-over, and produces 73 PS at 4800 rpm along with 111 Nm of torque at 4000 rpm. Meanwhile, the electric motor provided an additional 60 PS and, more importantly, more torque at 169 Nm. Sending the engine's output to the road is a continuously variable transmission (CVT) that drives the front wheels.

With a push of a button, all that is heard from the hybrid is a beep, signaling it's ready to go. That's because the Prius C starts up on electric mode, provided the battery has sufficient charge. Otherwise, the integrated generator recharges the battery while simultaneously providing propulsion. It's only when the driver plants the accelerator does the internal combustion engine kick in, thus charging the battery and delivering sufficient power when cruising along highways. 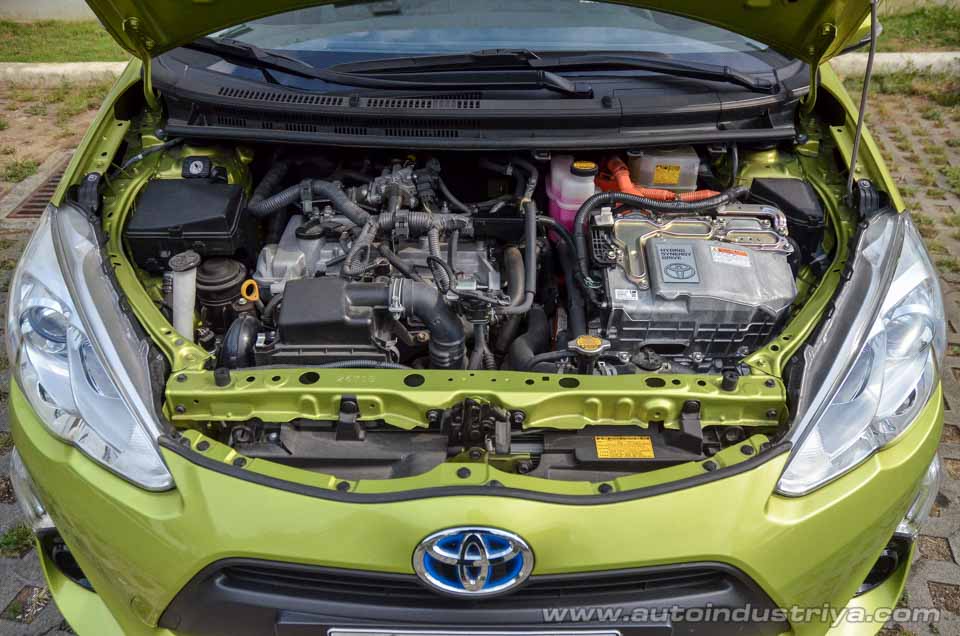 The Eco Score display actually allowed me to monitor my pedal pressure on the accelerator and monitored what mode I was on. With a light foot, the Prius C can drive along city streets or deserted back roads using electric power alone. For those who haven't driven a hybrid or an electric vehicle, the Prius C can feel unnerving at first, but tooling around on electric power in the city burns no fuel, emits no gases, and contributes very little in terms of noise.

Like most hybrids, if one really puts the pedal to the metal (during overtaking or dare I say spirited driving), both the electric motor and gasoline engine work together to deliver enough pep to the asphalt. It's not the most exciting engine to drive as it was configured for improved fuel economy, but it delivered smooth power thanks to the well-matched CVT. The transmission even has an 'engine-braking' mode which is useful when going down steep inclines and also quickly charges the battery.

Overall, the Prius C actually forced me to change my driving style, which is a good thing as hybrids were built to maximize fuel efficiency. Again, it's not the most engaging car to drive, but has surprisingly decent handling despite the weight penalty of the batteries.

I'll admit, I had a rather indifferent view of hybrids before, but actually getting to drive one for a week changed my opinion. It's a great alternative when buying city cars as its hybrid system meant less trips to gas stations. Also, the Prius C's (C for City) compact size makes it ideal for the demands of urbanites.

But at PhP 1,687,000, the 2015 Prius C is not what we would call affordable, especially if you start considering size vis-a-vis price. Unless the government offers tax breaks and less road tax for using hybrids, it will be quite a while before the Prius C or any similar hybrid vehicles will become a mainstream choice for motorists.

With a crop of new PPVs in the market, we see if a new heart boosts the mu-X's appeal