The great thing about sportscars is that they exist on a different realm; a place where the the goal isn't about finding the shortest distance between Point A and Point B, but finding the most enjoyable route between the two, regardless of what your definition of fun is.

For almost two decades, the Audi TT has existed on that plane, delivering front-wheel drive (or all-wheel), hot-hatchback performance with the style and presence of a small sports coupe. I've had plenty of seat time experience with the previous two generations of the TT, but this is now the third generation of the model named after a famous motorcycle race that was won by NSU's (one of Audi's predecessors) victories at the Isle Of Man TT.

We remember the original TT as being a rather rounded vehicle on the outside, but this new one is far sharper. The 8S (Audi's code for the 3rd gen TT) is quite striking, using a very edgy interpretation of Audi's design language. Eyes are immediately drawn to the sharp LED headlamps (with LED DRLs, mind you), the handsome Audi grill, the shapely body, and that sloping roofline that's finished off at the back with more LEDs in the taillamps. 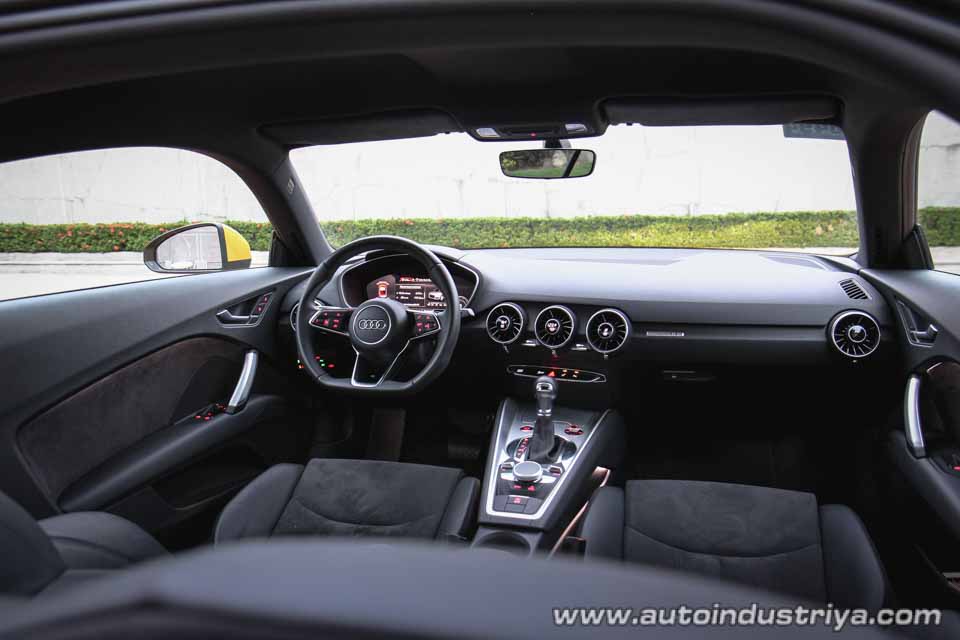 When I first sat inside this 8S, one thought in particular struck me: Audi's interior designers pressed the minimize button on everything. And I mean everything.

Instead of gauges, you get a virtual cockpit; an LCD that unifies the gauges, the audio system, the multi-info computer, and more all onto one screen where the gauge cluster would be. The center console has all the buttons and knobs for the multi-media interface. The dashboard is extremely clean and devoid of clutter, and Audi even transferred the climate controls onto the aircon vents themselves. I think I should have opted for that briefing on how to manipulate the many controls instead of spending 10 minutes parked in the lot trying to figure out how to cool the cabin.

Once I actually got used to the cabin layout, I found it to be quite natural. I particularly liked the way the cabin was designed and oriented towards the driver. Being a 2+2 means that the back seats are meant for kids, or smaller and slimmer individuals. There's a decent amount of space in the liftback boot for bags and such; Audi says it can take on 312 liters of cargo which can almost be doubled by pushing the rear seats down. 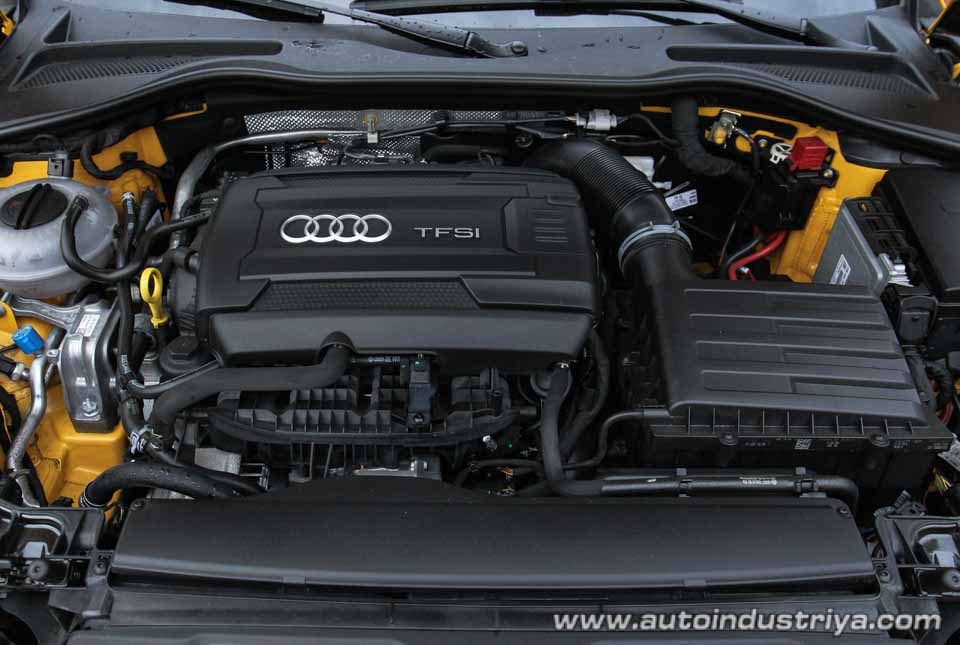 A push of the start button lights up the the 1984cc turbocharged four-cylinder under the hood; the same engine as the Golf GTI. We can go on about how it has direct injection, an advanced turbocharger, valve lift and such, but what counts is that it has 230 PS and 370 Nm of torque, significantly more than its predecessor that had 211 PS and 349 Nm. As expected, the TT comes fitted with Audi's S-Tronic dual clutch automatic. 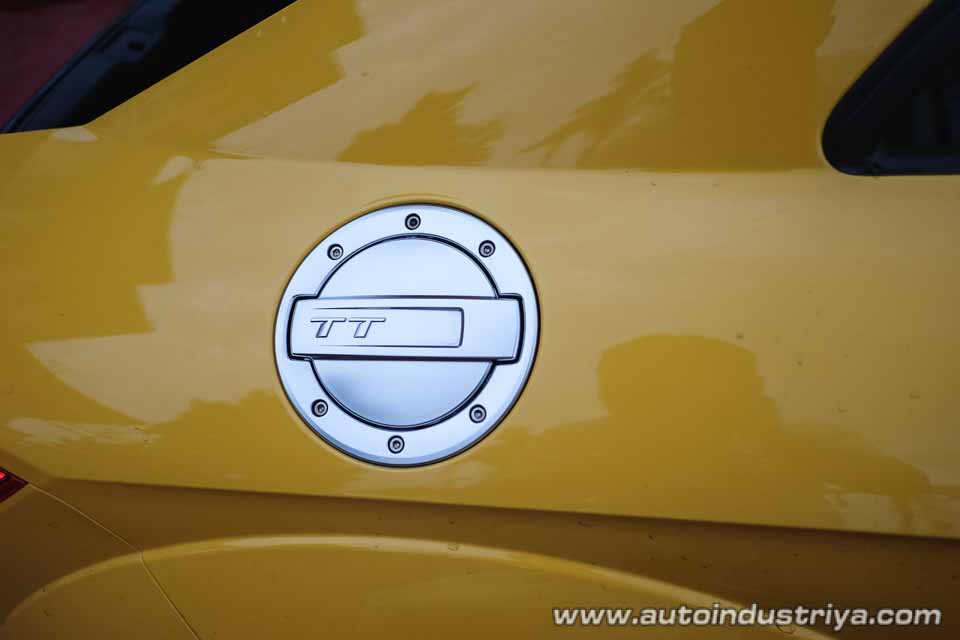 The ride is firm but fair; if you expected a floaty ride, perhaps its best to look elsewhere. Visibility is better than expected, and thus maneuvering the TT around town was quite easy. The powertrain has several settings available for the driver; Comfort, Dynamic, Efficiency, Individual and Auto. Efficiency works well but tames it down a bit too much, while Comfort was perfect for city or casual driving. Most of the time I kept it in Dynamic; this is a car made for dynamic driving after all.

Floor the throttle and the TT's responds quickly to deliver its brand of drive, easily lighting up the driven front tires if traction control is off. 100 km/h is done and dusted in just 5.9 seconds, and the TT can ride the boost of the turbo all the way up to 250 km/h. At that speed, stability can be a problem, but Audi did equip the TT with a spoiler that deploys automatically, helping the back end stay secure and stable all throughout. 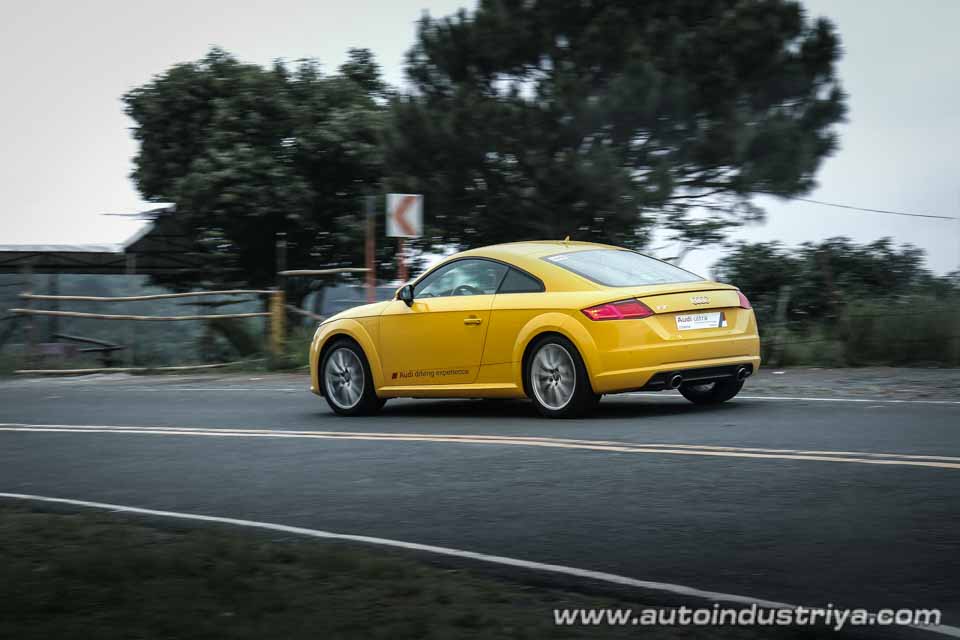 Drive on winding mountain pass and you'll be rewarded with a very responsive little sportscar (especially in Dynamic mode), one that is forgiving in the corners unlike most rear-wheel drive cars. Dive on the brakes, feed in some steering lock towards that late apex, and then start feeding in the throttle. This TT may not reward the analog driver with steering feel or pedal feedback, but it's precise, planted, and very quick if driven properly.

Rear-wheel drive sports cars are still more entertaining, but they can be very tricky to handle on the limit if you're not prepared behind the wheel. Since 1998, the TT has offered a great serving of style, advanced technology, enjoyable performance and all around fun, no matter the road and no matter the driver's skill level. Such is the appeal of the Audi TT, something that carries over three generations on.

What's it like to have the world at your beck and call? We sample the Rolls-Royce Wraith to find out.

We've waited a while for a Golf that isn't a GTI. Can the new TSI live up to its stronger brother's standards?