Foton has -at long last- built an SUV, and I can't say we didn't see it coming.

The seven seat SUV or PPV (pick-up passenger vehicle) segment is a major force in our market. Our rougher roads, our bigger families, our need for diesel torque and economy, our flash floods, and many more on the long list of other daily requirements necessitate a vehicle that can really do it all. Such is the reason why car manufacturers have marketed vehicles such as the Fortuner, Trailblazer, Montero Sport, mu-X (formerly Alterra), and Everest in the country with remarkable success compared to our ASEAN neighbors.

But the Chinese brands have had very limited success in this segment. A few years back, we tried out the JMC Orion; a Chinese-designed but Filipino-built seven seat SUV. It was a decent attempt, but compared to the options already available at the time, a model from a not-so-well-known Chinese company really wasn't going to fly off the showrooms much in the same way as the models from the established Japanese and American brands in the country.

Now we've got Foton entering the segment, and they call it the Toplander, an SUV that is based on the Foton Thunder.

In a way, the Toplander has an unusual similarity the Orion we drove three years ago. This SUV is from a Chinese brand, but also assembled in the Philippines; this time in Clark. But that's about it. The difference lies in the fact that Foton is already a strongly established player in our market particularly in terms of heavy equipment, commercial trucks, public transport vehicles and even government sales. They're so successful in courting business clients that they even host their own expo to showcase their heavy equipment. 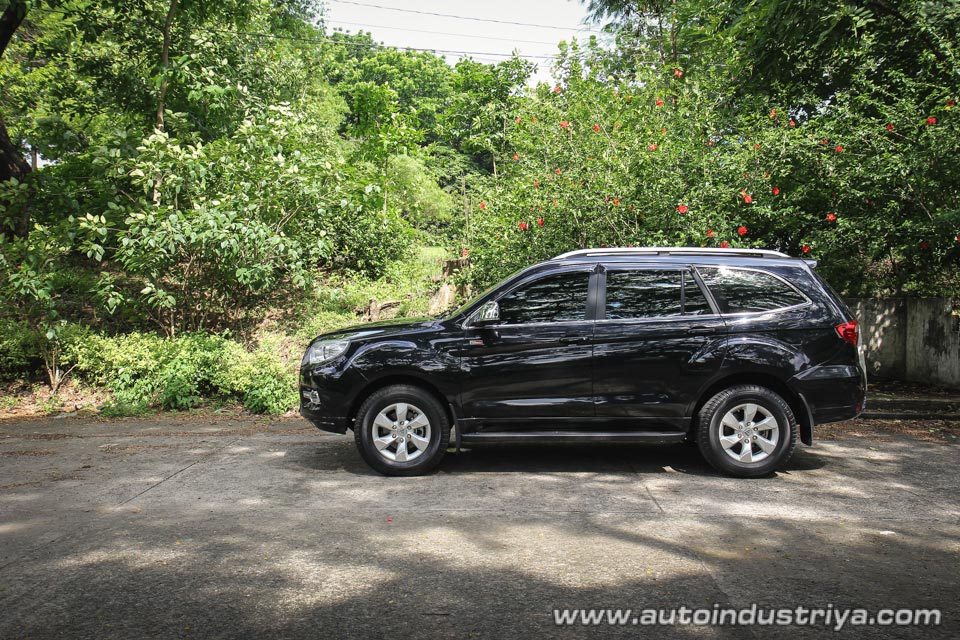 Looking at the Toplander -a name that I think could have used a bit more time at a focus group discussion- it doesn't seem like it was “inspired” by another brand. While not at the forefront in terms of design, the look itself appears unique, and that's a good thing; Chinese car companies reportedly have 3D scanners that can map an entire car, and then it's just a matter of fitting different fascias and rear ends.

The proportions, the lines, the height, the wheels and the rear end all look proper for an SUV of this type. The model we're trying out is the Standard 4x4 variant, but it comes with a few extras like the roof rails and rain gutters. One thing I would change would be the front end; perhaps the fascia of the Thunder might work better on the Toplander. 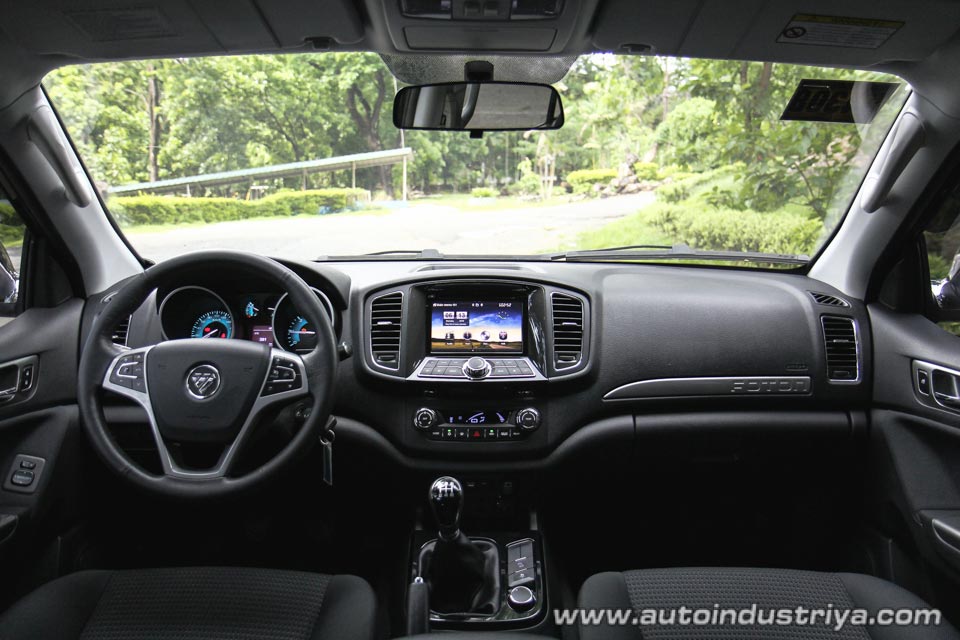 The interior is -surprisingly- a very nice place to be in, and that's saying a lot. The shape and look of the dash actually looks a bit American, ditto for the blue lighting on the gauges. The texturing is decent despite the fact that it's made of hard plastic. The buttons, switchgear, controls, even the material used on the steering wheel are all of better quality than I expected. One thing also stands out: there's none of the “Chinese variation” of the new car smell.

The front seats are soft and comfortable and there's plenty of space in the middle. The third row is something I found to be a bit tight, but that's expected. Both the third and second row can be folded to offer plenty of cargo space.

Surprisingly there are quite a few goodies around the cabin. The audio system is a 2-DIN unit that has DVD playback along with Bluetooth, USB, and an aux port. Hill Descent Control is standard, as well as Hill Start Assist; that one proved useful while stopped on an upward slope. The odd bit is that while this is a top spec variant with a 4x4 drivetrain, there's no option for an automatic; instead the only transmission available is a a three-pedal, 5-speed manual gearbox. 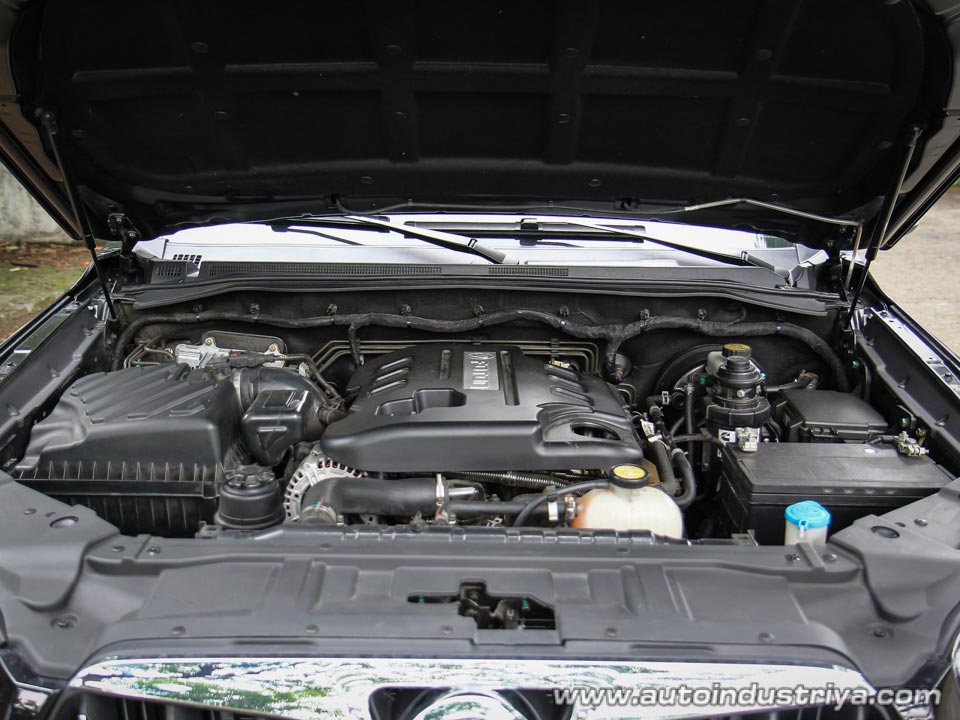 At the heart of the Toplander is a rather potent engine: a 2.8-liter turbo diesel. The engine itself is made by Cummins from their IS (Intellect Series) line of turbodiesels, and in this guise it makes 163 PS and 360 Nm of torque. Those numbers are quite good, and should be plenty to move this two tonne SUV.

The Toplander drives quite nicely within city limits. The ride feels like that from the previous generation, but in a good way; there's decent pliancy in the back. The clutch is not truck-like at all; it's light but not too light. The gearstick slots in very nicely; not much for gumminess, sloppiness, or other adjectives that denote vagueness when shifting. 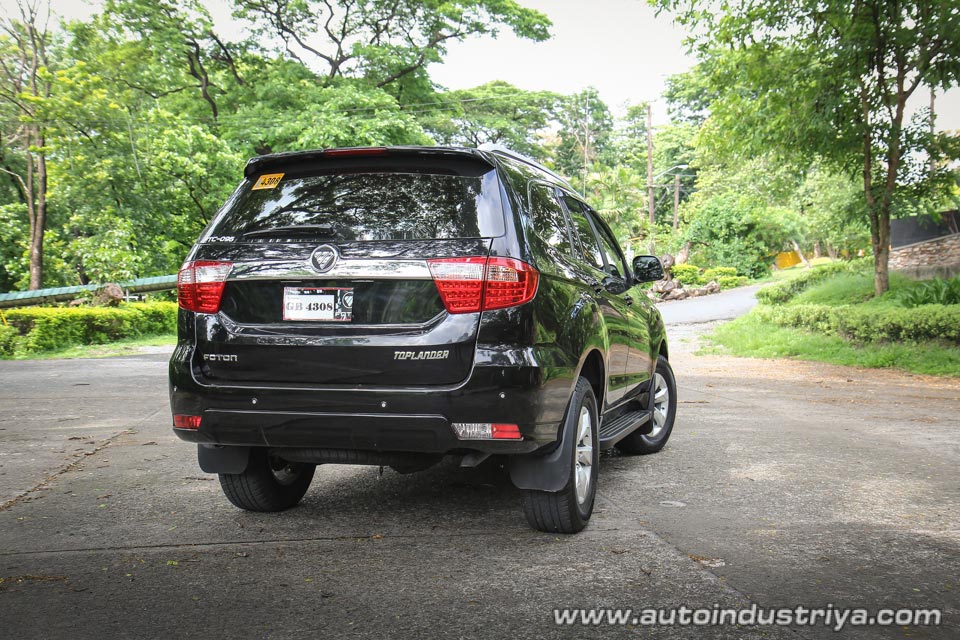 There's good performance from the engine when your right foot demands it; the torque from the Cummins diesel is very useful especially on an uphill with a loaded cabin. Handling is alright but in no way is the Toplander a corner-carver, but the damping of the suspension feels balanced; I say that because some of the Chinese-made vehicles I've tried had inconsistent damping. The braking is also decent, but it takes a bit of adjustment on the driver's part to get used to the way the brakes bite; it feels quite different from most of the SUVs we have become accustomed to. What I did notice about this Toplander's gearbox is the second gear; there seems to be a problem with the synchromesh as there's a bit of bite when downshifting from third.

On a light to moderate trail, the Toplander does deliver good traction with the 4x4 system engaged. The suspension settings can be a bit bumpy if driven on a rockier path; there are still strong traces of pick-up truck in the way it drives and rides on a path less taken. What was impressive was how solid it felt all throughout; no creaks or rattles normally associated with Chinese vehicles.

As a whole, the Toplander 4x4 performed better than expected; it just felt properly done, and that was surprising. Personally I would have picked a different name given its utilitarian brother's name, maybe even tweak the fascia a bit to give a stronger presence or perhaps fit an automatic gearbox in there to truly compete with the more popular nameplates in the SUV/PPV segment.

I don't think the Toplander can quite go toe-to-toe with the established order, but this is proof that they're getting closer to that level. Considering that it's priced at PhP 1,298,000, I'd say that the Toplander's proposition is decent for the money.

UPDATE: Foton Motors Philippines informed us that the version we tried was the Standard 4x4 and not the Executive 4x4. We have since updated the story to reflect the changes.

With a welcome boost of power, the Toyota Hiace Super Grandia gets a new lease on life

In this day and age of sleek crossovers and car-like ride quality, one SUV stands defiantly against the status quo