Several years of continuous growth for the automotive industry can do wonders for car buyers' choices. In just a few short years, the number of British marques has grown to match the numbers of Japanese brands officially represented in the country. This also encourages the current players to broaden their line-up in the face of tougher competition.

Perhaps egged on by the arrival of new players, or in some ways, encouraged by the inroads made by Lexus’ or Hyundai's large luxury sedans, Honda has finally rolled up its sleeves and is bringing the fight upmarket.

Their latest contender is the Legend, the carmaker’s flagship since 1985, now on its fifth iteration and ready to take on the fight to a whole new luxurious and high-tech level. No expense or feature has been spared, making the Legend a veritable showcase of all of the brand's comfort, convenience, and efficiency technologies.

It all starts with the entrance it makes, with its broad stance, creased hood and subtly-flared fenders. Its distinct, V-shaped grille bears a large chrome flourish at the top. On either side are the broad headlights, each bearing 10 LED lamps to create a jewelled look. Underneath, on the lower valence, foglamps are disguised among grilles of the lower intake.

As it drives by, the front fenders take on an almost pontoon-style, followed by a shoulder line that glides to the rear tail lamps. Its massive, polished chrome wheels resemble commercial airliner turbines - in spite of the grandiose design, Honda says they serve to minimize wind and road noise. The cabin rises up and glides back down gently to form a coupe-like profile. Windows are outlined in chrome, tapered in the rear by a Hoffmeister kink (typically employed by BMW).

Is it rounds the driveway, wing-shaped LED tail lamps wrap around the sides. They’re linked by a more discreet chrome plate garnish. Reflectors on the bumper are wrapped in chrome. And unlike most sedans in this class, the tailpipes are hidden within the diffuser. 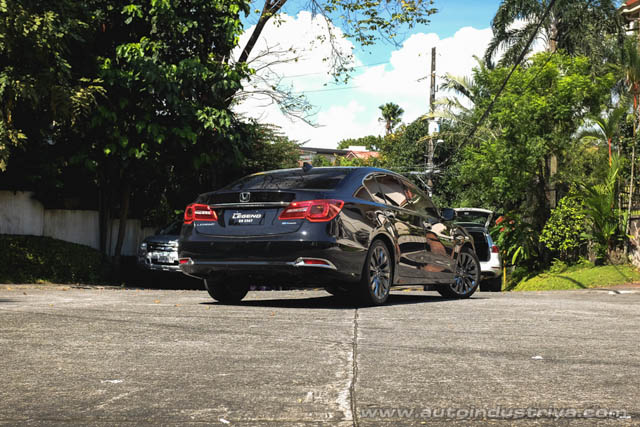 As expected, the Legend's cabin is sedate but nonetheless inviting, like a modern executive office. Wood appliques are kept to a minimum, with the only insert running a thin line across the dash and center divider. Wood inserts on the wheel have thankfully been removed. Instead, the Legend offers generous amounts of soft Milano leather, on the dash, seats, and armrest.

As we've said before, this vehicle proudly showcases Honda's latest tech, yet applied in such a purposeful way so as not to be intimidating. The wheel is remarkably uncluttered, while the center console spreads hybrid drive, entertainment and climate information and controls across two LCD screens. There’s no gear selector here. Instead, recessed buttons provide a more ergonomic means to select the drive mode, and more room for the armrest.

Naturally, the rear seats are the most pampering of all. There’s very generous leg and knee room with a drop-down armrest and window blinds to further ease the escape into bliss. Exceptional Noise Vibration and Harshness isolation, aided by Active Noise Cancelling, create a really quiet cabin. This gives you all the more reason to tinker with the built-in 14-piece Krell surround sound system. 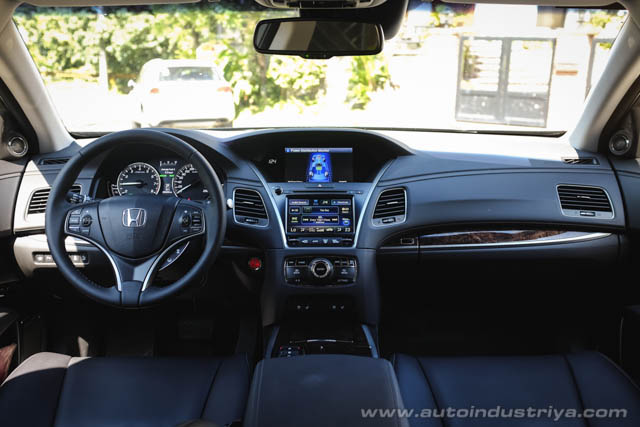 Even with the entertainment system off, oneyou'd be hard-pressed to hear the Legend's engine running. It’s powered by an Earth Dreams 3.5-liter, direct injection, i-VTEC V6. This is paired with a Twin Motor Unit (TMU, individual electric motors) for the rear wheels, to make the Legend a Hybrid all-wheel drive. A seven-speed dual clutch automatic allows it to accelerate up to cruising speed. There are also paddle shifts should the driver decide to change manually.

Turning on the ignition starts the vehicle (given enough battery power) in electric mode, thus allowing it to pull away from a driveway without a sound. At higher speeds, the petrol motor comes to life with hardly a shutter. In fact, it can come from slumber to instantly match the required high rpms under hard acceleration, without so much as a jerk, only a smooth and reassuring flow of power.

Come cruising speed, the petrol engine, equipped with VCM can shut off cylinders at will, operating anywhere from 6 to 4 to 3-cylinders to maintain the momentum, in addition to the assist from the electric motors. In theory, this grants the large saloon with the palpable power of a V8 and the economy of a 4-cylinder. In practice, we managed 6 km/L within the city, in heavy traffic with three passengers, with systems like VCM, Eco Mode and Stop/Start working to make the most of our fuel. We weren't able to test it on the highway.

Once the vehicle does get moving, the electric motors aid in more ways than economy. They serve as an integral part of the vehicle’s Super Handling – All-Wheel Drive (SH-AWD), the TMU are able to deliver variable torque to each rear wheel. Coupled with disc brakes that can individually brake each wheel, and it makes for a very sophisticated and intelligent all-wheel drive system. The brakes are also equipped with regenerative braking technology to charge up the battery and prolong their range. When active, there's a noticeable change in the brakes' bite, slowing the car down even more. All this can be called to the central display, to give the driver a better understanding of the complicated process that's going on.

Driven leisurely, the Legend makes for a luxurious means of transport, easily muting much of the noise of the outside world. The ride is on the taut side though, comparable to sportier German executive sedans.

Some drivers will find the vehicle's built-in cameras to be particularly handy in traffic. Like its stablemade, the Odyssey, the Legend is also equipped with a number of cameras to show just how close the car is to the car ahead, the curb or any obstacle behind.

Another enjoyable feature was the heads-up display, with a customizable display. The focus is tweaked so that the display appears to hover just above the hood. It can also show anything from the speed, tachometer, to the hybrid system. 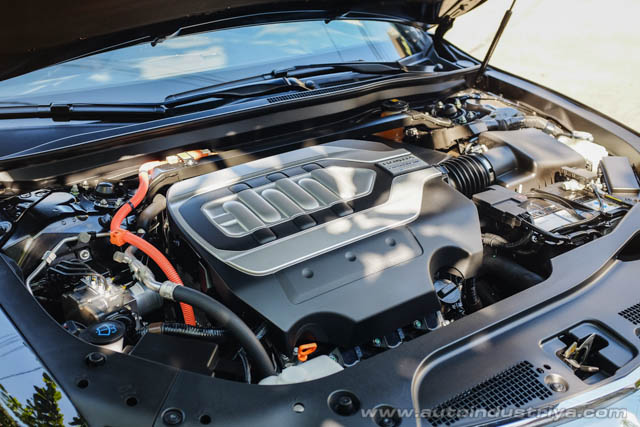 This pays dividents come the winding mountain roads. The is where one can best enjoy the Legend's locomotive-like acceleration — smooth, yet purposeful. Its size and mass is cleverly disguised by the effectiveness of the torque vectoring system, easily rotating the long rear, with light body roll, but a very confidence inspiring feeling.

A whole suite of safety systems provides additional reassurances, from ABS with EBD and BA, VSA, airbags all around and Honda’s SENSING system. This new feature makes use of cameras in front which constantly scan the road for pedestrians or potential obstacles. It can prime the hood for a pedestrian collision as well as alert the driver. It can also provide brake and steering inputs to mitigate an accident.

If there’s one caveat to the Legend, it’s its compromised trunk space, taken up by the TMU and electronics for the rear wheels. It’s nonetheless quite cavernous as it is still capable of accommodating two large golf bags.

Some may find the over P4M price tag to be steep, nonetheless, it's still the most reasonably priced luxury hybrid available. Believe it or not, it can also be availed with Modulo and Mugen upgrades, as well as other interior and exterior colors on order basis.

As a showcase of Honda's latest technologies, the Legend is certainly impressive. The ride may not be soft enough to some executives' liking, though those that prefer to drive their cars than be driven might want to look into it. As such, the Legend is a cerebral choice, distinctly different from other luxury car choices by how it's a little bit of everything — luxury car, hybrid, sport sedan, and a glimpse of the future of driving, all rolled into one.

We test Toyota's challenger in the competitive pickup segment

Bolder, yes, but is Chevy's Captiva a captivating choice in the segment? We take one for a spin to find out