You can’t rush perfection, they say, and that may very well be why the GS F, Lexus’ M5 rival, took quite some time to arrive. It seemed painfully obvious that after the IS F was launched in 2008, the GS F would soon follow.

Yet it took nearly 8 more years for that to happen, and in that time, its competition has dramatically changed. Large sport sedans went from ludicrously large engines to smaller turbocharged powerplants, stiff sport suspension tuning was falling out of fashion, and semi-autonomous driving aids were being put into everything.

Is there still a place for a big brute of a sedan in today’s more fickle times? A drive in the GS F may return a resounding, “yes.” 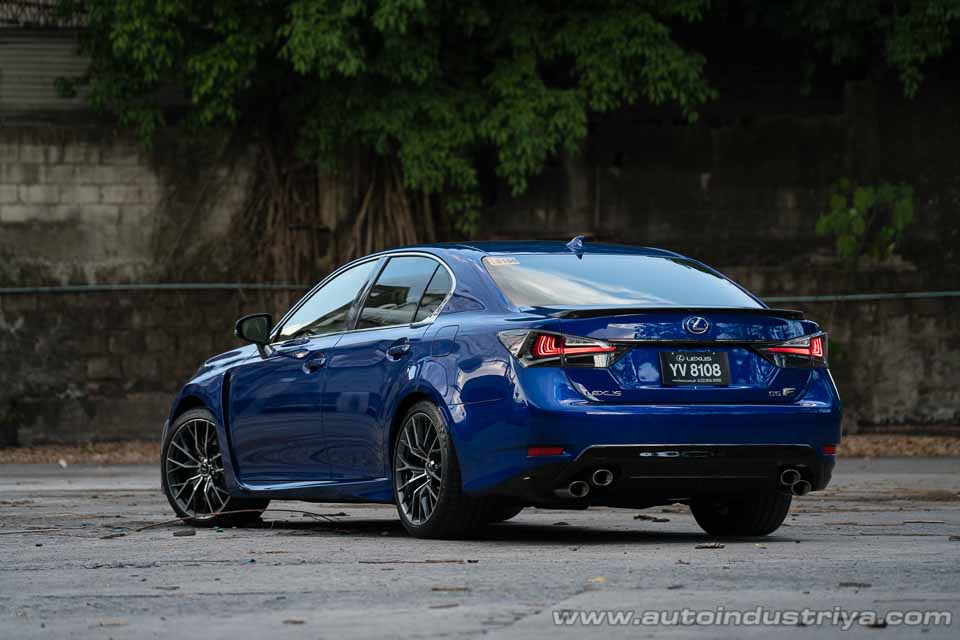 A glance at the Lexus GS F and reminds one of a more ostentatious sport sedan past. Its big grille is flanked by gaping intakes. Flared wheel arches house massive wheels and tires. Finned side skirts divert air around the body. Behind, a trunk lid spoiler nods to the big wings of old sport sedans. The final tip of the hat is the stacked tailpipes first seen in the IS F.

The cabin is more sport than luxury with a mix of alcantara, leather, carbon fiber and a whole host of digital screens. It’s a bit intimidating at first, looking more like an R35 GT-R than a Lexus, but it soon becomes practically second nature after a few hours. 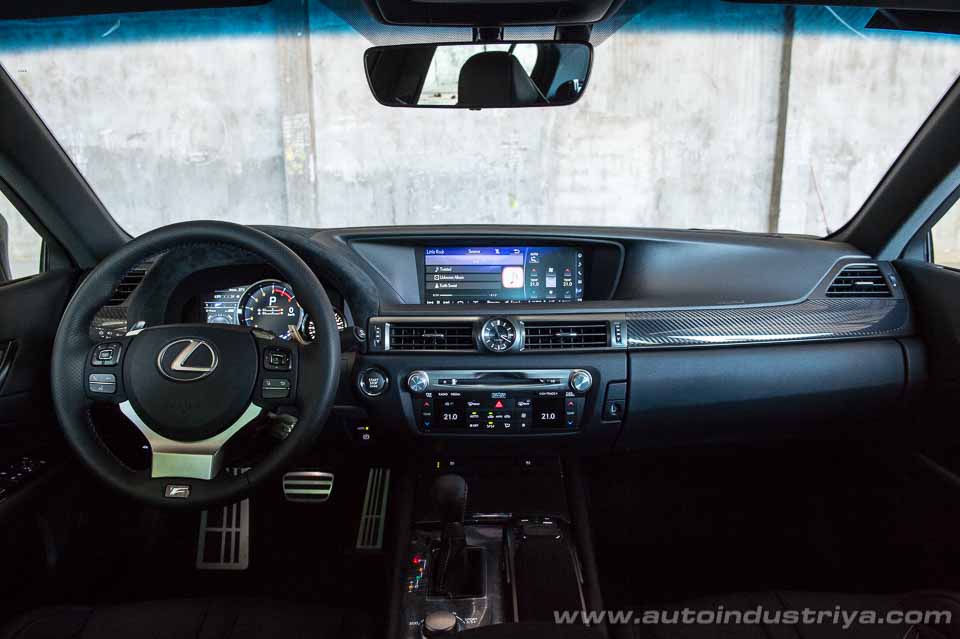 First off, there’s the digital instrument cluster, dominated by the massive tachometer. It doesn’t slide left or right like the LFA or IS 350 F-Sport, but still changes color with the driving mode selected. The speedo is off to the right, but you’ll hardly glance at it with the speed readout in the tach and in the heads-up display. The left screen can be configured to display anything from fuel eco readouts, audio, or even gadgets like the G-force meter or torque distribution.

Over in the center is the 12.3 center screen which can show GPS Navigation and other settings or split into two to show that and any additional readouts. It’s all controlled by a mouse on the center divider, with haptic feedback returned when hovering over each option. The climate controls have displays with numbers that scroll like old number rollers. Closer to the driver is the gated shifter and below it sit the drive mode and torque vectoring controls.

There are clever touches too, like the alcantara lined dashboard to eliminate reflections. Built in blowers in the seat are perfect for stepping in from a really hot day.

Behind are bucket seats for two more. We don’t recommend trying to fit in a third owing to the stiff cushion and large central mound. The most luxury they get are their own climate controls and a rear retractable blind. This is still very much more a sport sedan than luxo-cruiser.

In the trunk, a large mound hides the full size spare. Yes, it’s a 19 inch wheel, not a space-saver spare that ensures you keep rolling in style. It compromises trunk space a bit, but is still adequate for two golf bags. 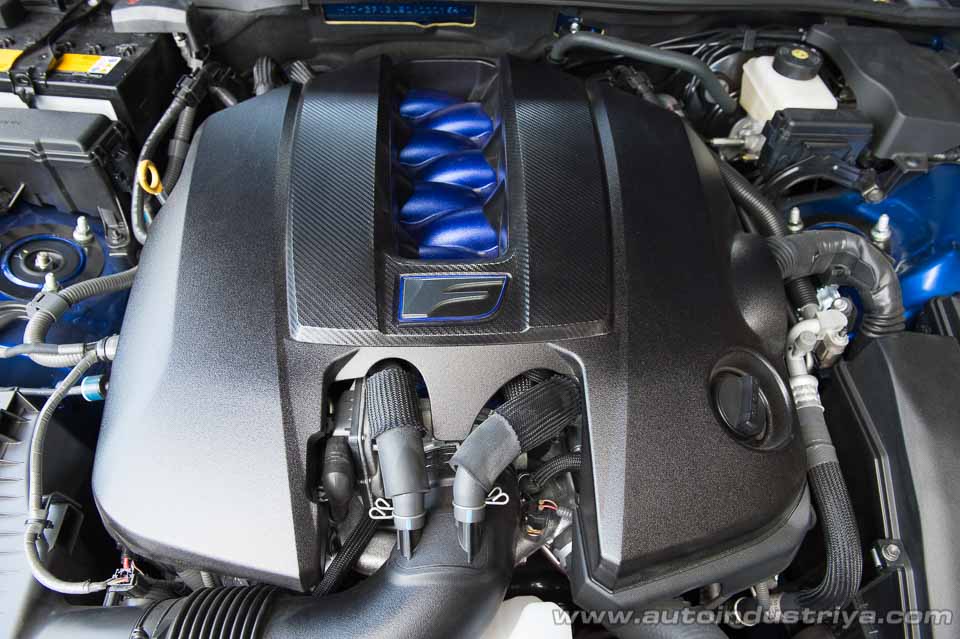 Powering it all is a quad-cam, 32-valve, 5.0-liter V8 with multi-point injection and variable cam phasing. It’s paired to an 8-speed auto which runs through an adjustable torque vectoring rear differential. Slip it in Eco mode and much of that power is muted to deliver economy. The engine can switch from an Atkinson Cycle to an Otto cycle to improve consumption, which should equate to anywhere from 4.6-5.5 km/L in heavy city traffic. Normal is still quite conscientious with fuel consumption while Sport and Sport S+ hold the gears longer and at higher revs. Be wary that this car needs a lot of space when making slow turns.

Of course, this all gets far more enjoyable in longer stretches of road outside of the city. The GS F’s power makes any highway drive effortless, requiring just a light tap on the throttle to accelerate to overtaking speeds. Even the torque vectoring pitches in, adjusting torque split with even the slightest input to help shift the body’s weight as you transition from the overtaking lane back to the right lane.

Pour on the power and the engine obliges with one of the most beautiful engine notes a V8 has ever produced. Give thanks to Active Sound Control which cancels any undesired noises and enhances the guttural roar of the V8 in the cabin. It's quite proud of that roar too, letting out a scandalous rev everytime you start the car up.

The ride may not be as lofty as one expects of this class, being a bit on the stiff side. Nonetheless, it still has a bit of give, muting most of the smaller bumps while still retaining rigidity. It’s not tiring to drive on a daily basis either, thanks to the very supportive seats. Driven leisurely, it will return at least 11 km/L in the highway.

Floor it and the transmission kicks down two gears and rockets the car to triple digit speeds you didn’t think possible in such short distances. The massive brakes will bring you back to a quick and drama free stop repeatedly without any hint of fade. The gear changes are quick, accompanied by mild blips when in Sport mode. 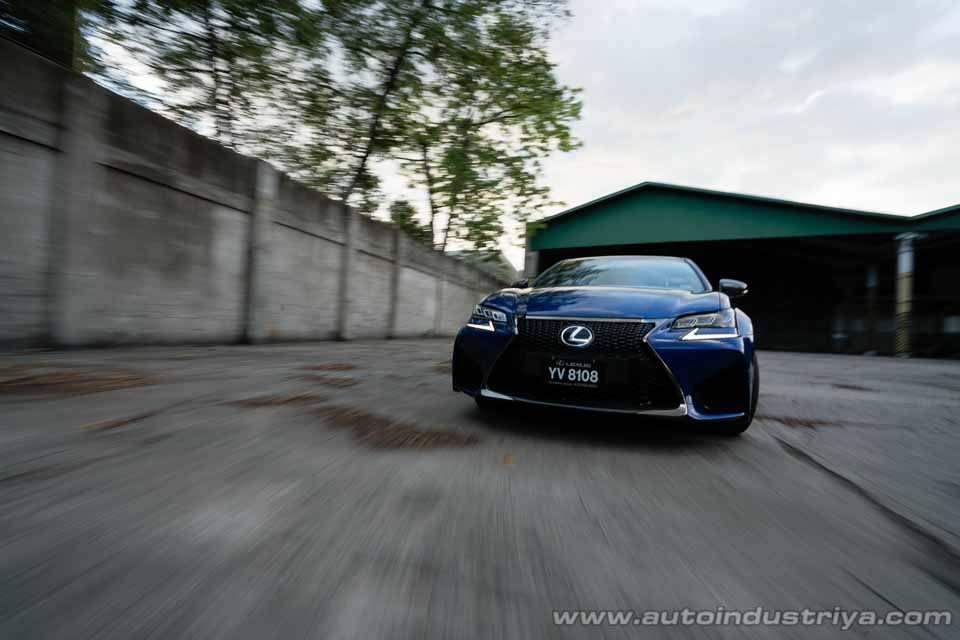 Yet perhaps the best testament of the GS F’s ability is when it’s driven more aggressively on winding roads. The throttle is very responsive, kicking down gears quite gently in lower increments, and skipping a gear or two when pressed harder. Some may have complained the steering to be quite numb, but I found it communicative enough to gauge the road surface. It also actively adapts its steering angle based on speed. Finally, the real surprise was the torque vectoring, working nearly telepathically with your brain. How much torque split is determined by the steering angle and speed. And when pushed, it practically feels like rear-wheel steering, quickly shifting the vehicle’s weight from one side to the other and getting the nose pointed where you need it. It’s far more quick, agile, and grippy than it appears and can keep up with smaller coupes in fun runs. 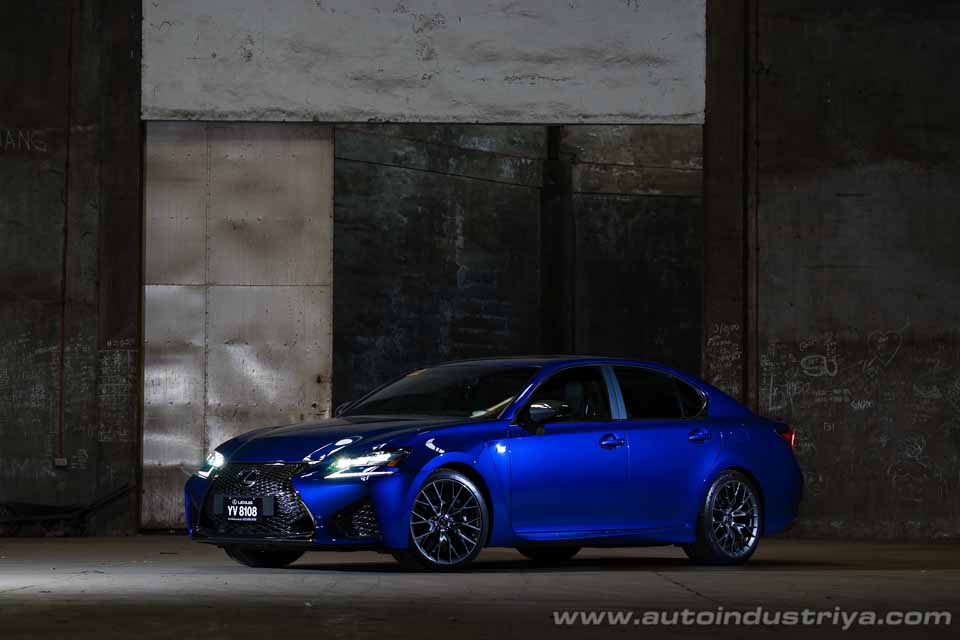 While it may bear the GS name, the GS F is more F than GS. It’s a large sport sedan built upon the values that made the niche great —power, space, and surprisingly good handling — paired with the technical wizardry you’d more likely expect from a GT-R or Lancer Evolution. It’s a sport sedan that’s been “kaizened”, and what a physics-defying beauty of a brute it is.

BMW recently gave their 1 Series a facelift and a turbo gasoline engine. Let's see how it drives.