As much as SUVs are synonymous to off-roading and going off the beaten path, more often than not SUVs today are now geared towards everyday practicality. Times have indeed changed since SUVs of old. What was originally purpose-built to take on the rough terrain has now evolved into a high-riding, high-tech urban cruiser.

With most SUVs nowadays traversing asphalt-laden roads instead of muddy terrain, this allowed automakers to build cutting-edge SUVs that come fully-loaded albeit not exactly geared for off-roading. Ford's idea for such a vehicle is this, the Everest Titanium Premium.

Having recently receiving a mild update, we see if Ford's idea of a high-riding, highly-equipped 4x2 SUV makes sense. 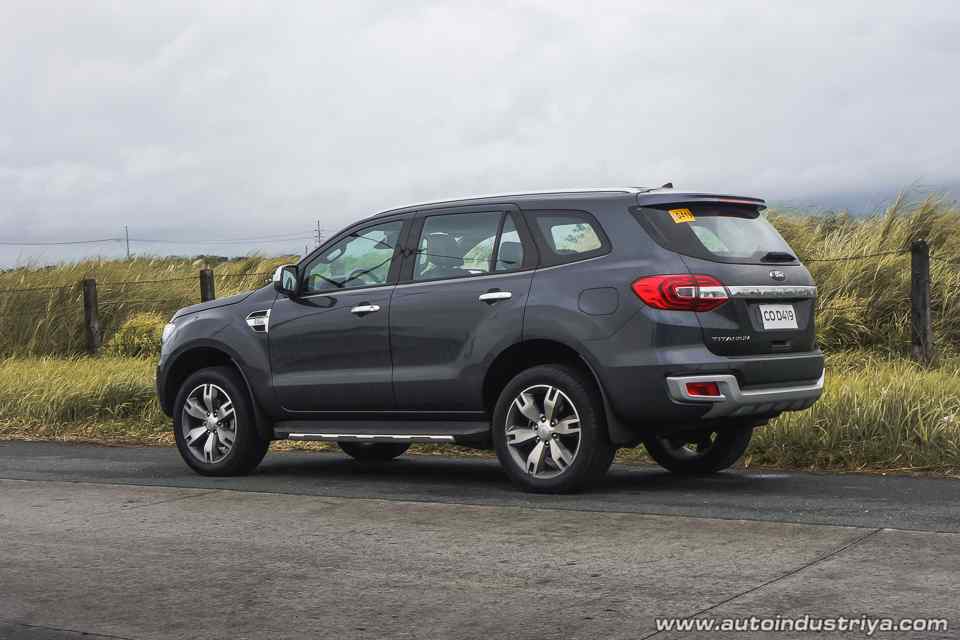 Notice anything different? If you failed to recognize any exterior changes (like we did), that's fine. Like the Trend and AWD Titanium we got to test several months ago, this Everest comes with mostly technical upgrades rather than an outright facelift. In spite of that, its design still looks fresh and has aged quite rather well.

As this is the Premium version of the Titanium 4x2, it gets the same level of features as the top-of-the-range AWD model albeit without the all-wheel drive system. For starters, it gets LED projector headlights along with LED daytime running lights that give it a more prominent face. Also different are the large alloy wheels which give the Everest a purposeful look. Other than that, it still comes with that familiar exterior design.

Hop inside and those familiar with the Ranger's interior will find the Everest's cabin all too similar. That's not a bad thing as both cars have an ergonomic, easy-to-understand dashboard. Almost all of the controls are placed where you expect them to be while the buttons and dials have a quality feel to them. The beige leather is no more as this now comes with black leather on all the seats which frankly suits the Everest rugged profile. 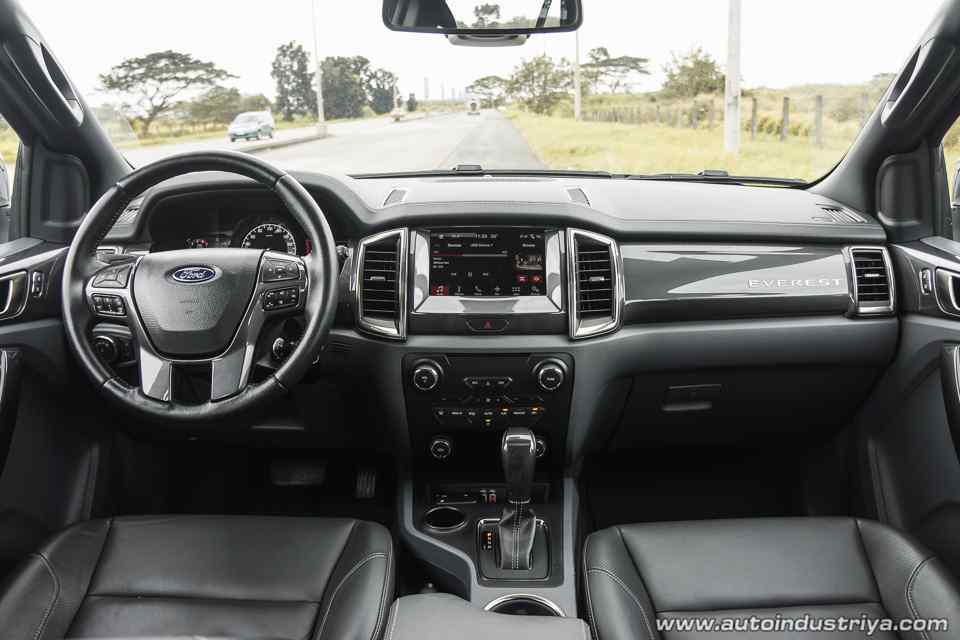 Those with keen eyes might have noticed that the Everest now has a new infotainment system. That's because Ford replaced the old SYNC 2 with the newer, more intuitive SYNC 3. Thanks to a simpler layout along with a faster processing speed, SYNC 3 is easier to use than its predecessor. Apart from the usual suite of features like AM/FM radio, CD, MP3, Aux and USB, it also comes with Apple CarPlay, Android Auto and navigation as standard.

Being the Premium model that it is, this partcular Everest also comes with the following extras: panoramic sunroof, power-folding third-row seats and power tailgate with remote function. But perhaps the most important add-ons on the Premium model are adapative cruise control (ACC), blind spot monitoring system (BSM), lane keep assist (LSA), forward collision warning (FCW) and park assist which can automatically park the car for you. Amazing how you can find high-tech car features in, what essentially is, a truck.

Pop the hood and you are greeted by the familiar 2.2-liter four-cylinder turbo-diesel codenamed 'Puma'. While smaller than most diesel-powered mills, it generates admirable power thanks to common rail direct injection (CRDi) and a variable geometry (VG) turbo. It produces 160 PS at 3200 rpm along with a healthy torque pull of 385 Nm available between 1600 – 2500 rpm. It is then hooked up to a six-speed automatic transmission that sends power to the rear wheels. 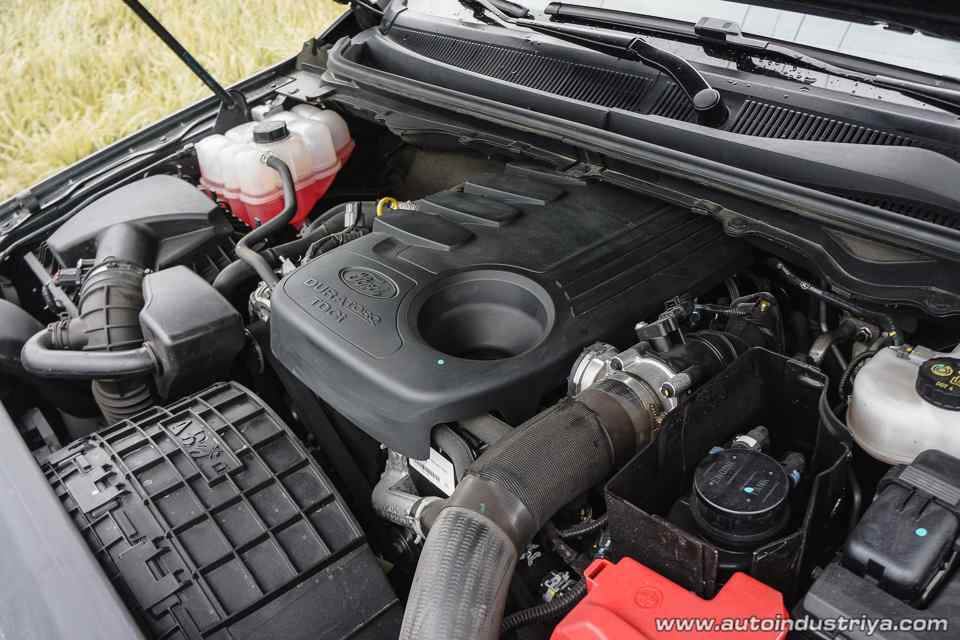 Off the line, the Everest has plenty of torque at low revs which allows it to reach crusing speeds easily. The engine does not feel overburdened despite its relatively small displacement as it felt that it had more than enough pulling power to deliver at the mid-range. It does lose a bit of steam at higher revs but that is to be expected from most turbo-diesel engines.

With plenty of low-end torque, overtaking other cars on the highway and along town roads was not a problem for the Everest. One can even set the transmission to manual mode, allowing drivers to play with all six gears. Mash your foot on the accelerator pedal and one can actually light up the tires but not before traction control takes over to reign in all that power.

Drive the Everest at a steady pace and the powertrain remains relaxed and relatively hush. The six-speed automatic seamlessly goes through the cogs and can switch between eco or spirited driving. It is also quite frugal as the Everest returned about 9.0 – 10.0 km/l in light city driving. Take it to the highway and it is capable of averaging 15.0 km/l at a steady 95 km/h.

While handling is not something you would expect from SUVs of this size, the Everest is actually quite easy to maneuver. Thanks to electric power steering (EPS), the Everest goes through bends swiftly and has a more precise steering control than hydraulically-assisted systems. The other benefit of having EPS is that it delivers light steering when you're driving around the city. It only become slightly heavier when driving at highway speeds. 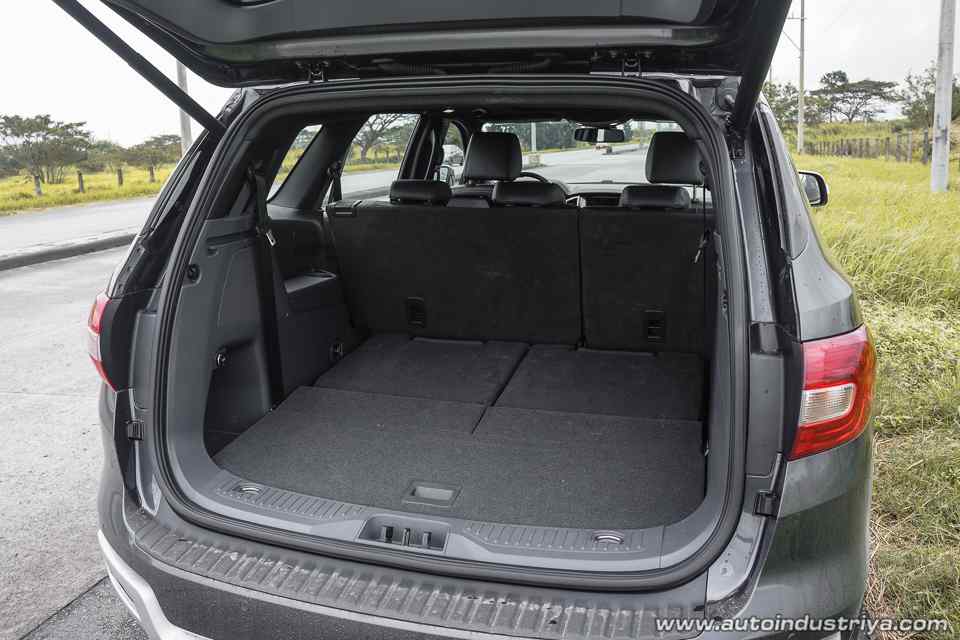 Compared to the mid-range Trend which comes with smaller wheels and thicker tires, Premium and AWD versions roll on 20-inch alloy wheels wrapped in low-profile Goodyear EfficientGrip tires. Granted that this particular Everest was able to deliver a comfy ride, it does get a bit bumpy when going over potholes, road bumps and uneven road surfaces. There is generous cabin space for all passengers, including the third row seats. With my foot 5'7 frame, I was able to myself at the very back just fine. Should you have taller passengers, the second row seats can be slid forward to provide additional legroom.

Another great thing about the Everest is its Noise, Vibration and Harshness (NVH) deadening. At highway speeds, wind and tire noise were kept to a minimum. Outside noise from other vehicles, motorcycles and trucks were also toned down. For such a rugged vehicle, I have to commend Ford's attention to detail.

Retailing at a cool Php 2,058,000, its price tag may be steep for some. But you do pay for quite a lot of tech that would normally be found on more upmarket brands. It has a lot more going for it thanks to the 'Premium' additions.

So what's my verdict for this 4x2 Everest in Titanium Premium guise? Well if you're the kind that favors having almost every imaginable toy and gadgetry in an SUV, this can do just that. Sure it may not have AWD, but unless you're the type that seldom go off-roading, this 2WD version should suit the needs of more, and then some.