Since the 1990's, the Ford Expedition has been a symbol of power and prestige on our roads.

Yes, LC80 Land Cruisers, Gen2 “Fieldmaster” Pajeros and tub-roof Patrols of the era are great, so much so that pristine examples of those very SUVs are still very much coveted, but the Expedition was really the one that offered so much more. Size, space, and displacement all combined to help give the Expedition a distinct presence on our tight, pockmarked and already traffic-laden roads at the time.

Today, things have changed. Fuel prices are ridiculously high and streets are even more congested, despite some rather confusing schemes to reduce vehicular volume in the National Capital Region. And with the changing times, so too must the Expedition.

Here's the new version of the Expedition EL, the fourth one since the original in 1997, and we'll be the first to try it out on local roads on the daily commute to work, to the mall, and anything else in between.

The Expedition is the flagship (of sorts) of the “E” line of Ford's SUVs. EcoSport is the tiniest, followed by the Escape, the Everest and the Explorer. For a brief period, we had the Excursion, but that proved to be already too big for the market (and for our roads), especially in post-Asian Financial Crisis Philippines.

The happy compromise that Ford came up with in the late 2000's between the big Expedition and the gargantuan Excursion is the Expedition EL; the E and L being Extended Length. In North America, this EL version is known as the Expedition MAX.

Actually there's an interesting parallel between the naming nomenclature of Ford and Boeing. More capable versions of Boeing's airplanes like the 777 are appended suffixes like ER or LR for Extended Range or Long Range, respectively. Even a new 737 variant is called the MAX. The similarity is not surprising; the former President of Ford, Alan Mulally, did come from Boeing. 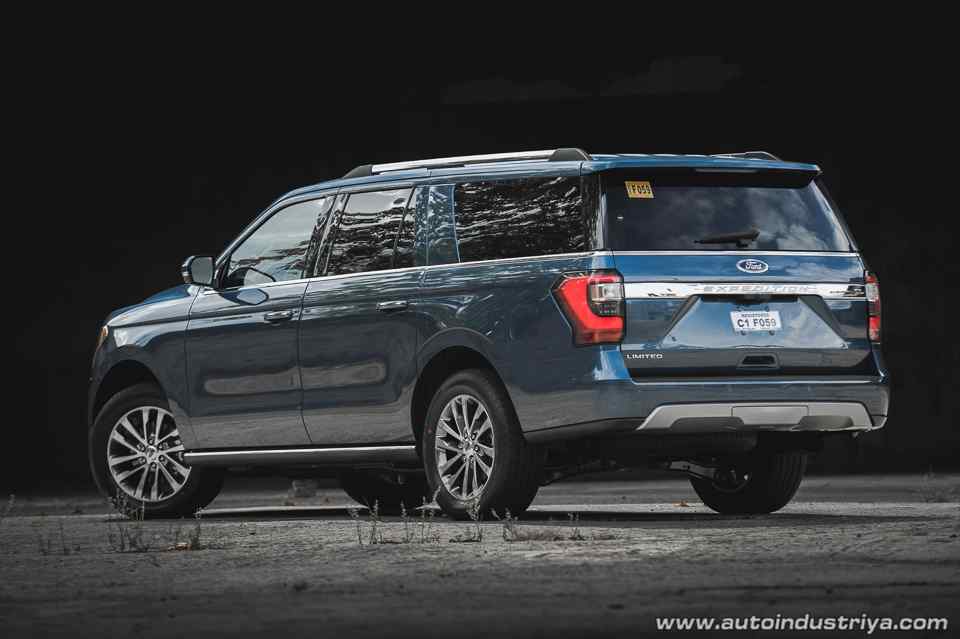 Even from a distance, you can tell that this Philippine-spec EL is huge. At 5665mm long, it's about 330mm longer than the standard length Expedition (which we don't have). The EL is also 2 meters wide and nearly 2 meters tall, so you'll have to be careful when choosing which mall parking structure to go to, unless you want to know how expensive it is to replace a big panoramic sunroof. Still, despite the Expedition EL's big proportions and as a testament to the size of the Excursion, the now discontinued latter is still bigger.

The striking thing about the Expedition EL -apart from its size- is the style and presence. For years, we've thought that the Expedition was lagging behind in the style department compared to its direct competitor: the Suburban. But that seems to have been addressed, as the Expedition oozes in presence. 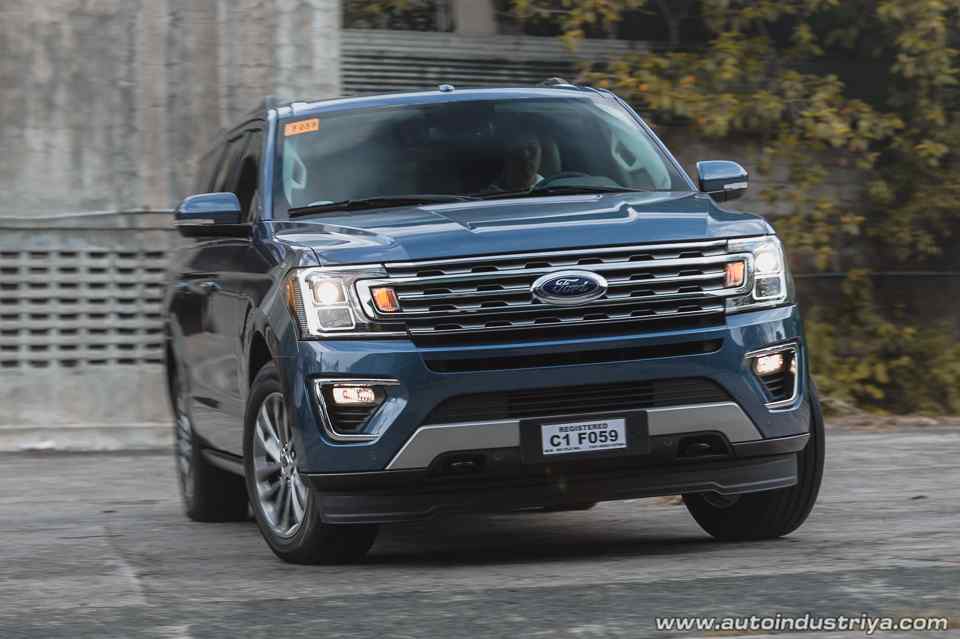 The fascia looks like a cleaner, classier interpretation of the front end of the Expedition's pick-up brother, the F-150. I would have preferred the headlights of the F-150, but the Expedition's front grill and headlight combination does work, along with that wall of a front end. The beltline is higher than the previous generation, making the greenhouse slightly smaller. Actually, I like it better this way, and creates a more streamlined appearance despite the boxy proportions. Also, for those interested in armoring (the Expedition is also a popular choice for vehicle armorers), the larger door/smaller glass combination should (in theory) make for an easier application of plates. 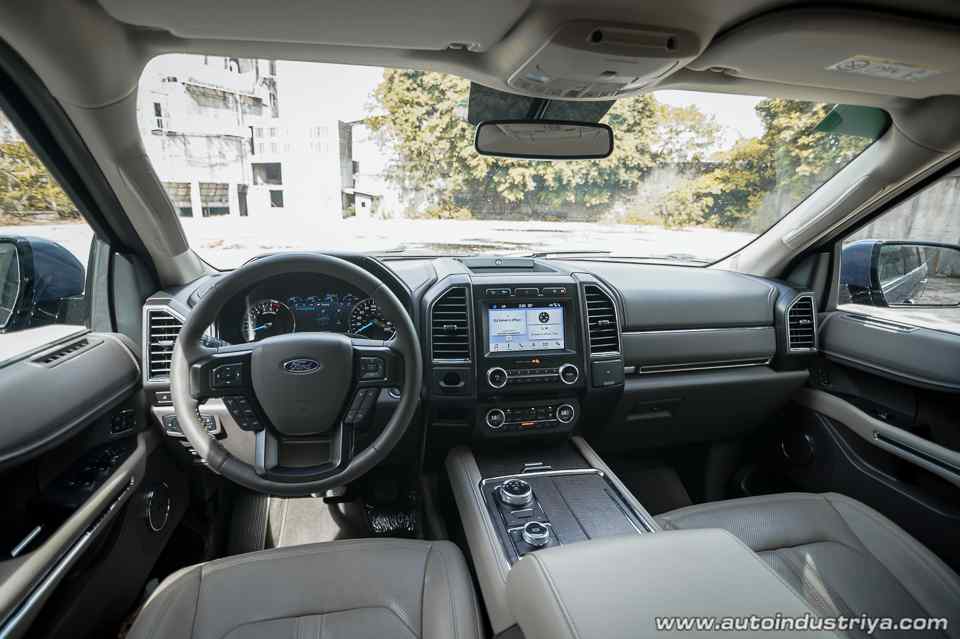 Inside, well, clearly there's a big upgrade over the outgoing model in terms of technology and luxury. The dashboard is completely new and busier than ever with all kinds of features like the Sync infotainment system right smack in the middle. I like the treatment of the gauges with the classic tachometer and speedometer, along with a big digital display for the trip computer and auxiliary gauges like engine temperature, transmission temperature, oil pressure and fuel level. There is an abundance of buttons on the new steering wheel for the many functions such as cruise control, taking calls via Bluetooth, and adjusting the smart trip computer screen in between the gauges.

Being a 4WD, there are buttons to engage the 4x4 mode and the rear-wheel drive mode. The Expedition also gets a drive mode selector, much in the same way as the Explorer, but the most striking thing about the Expedition's forward cabin is the lack of a shifter in the classic, T-bar (-ish) sense. Just like some Land Rovers, Jaguars and Chryslers, the Expedition EL comes with a PRND rotary dial shifter with an M button in the middle for manual selection. There are no paddles, but there are buttons behind the rotary dial; plus on the right, minus on the left. 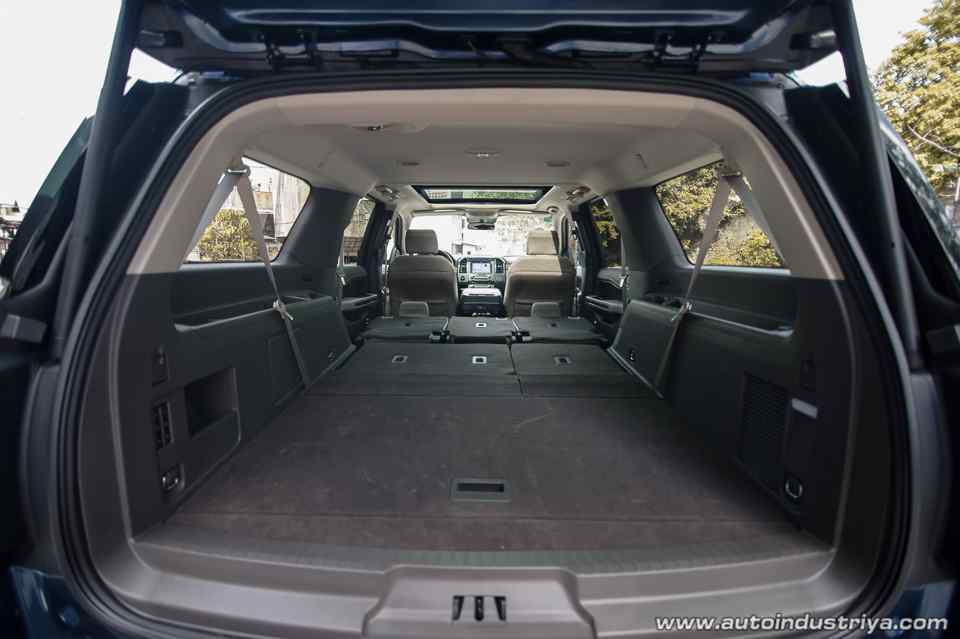 As expected, the EL is an 8 seater with 2 in the front, 3 in the middle row, and another 3 in the third row. The second and third rows can actually be folded from the boot, but only if you need to; as it stands, the EL already has boot space for over 1000 liters of cargo, even with the third row upright. If you need more, well, fold down both rows and you have space to fit a full sheet of 4x8 plywood flat on the floor.

The seats are indeed nice; the front seats have the heaters that you can prank your front passenger with, but more importantly, both have seat coolers. You'll love it after parking your Expedition under the sun for a few hours, and with a remote start system, you can start cooling down your SUV as you walk up to it. 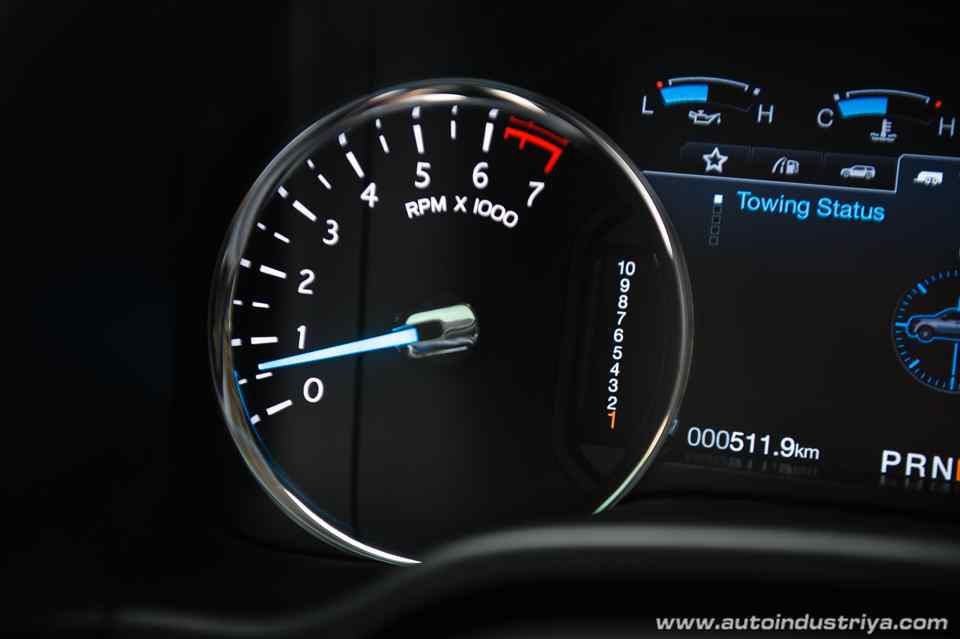 Like the last Ford Expedition Platinum EL we tested a few years ago, the new Expedition EL (non-Platinum) comes not with a V8 but a V6, and it's got two turbochargers. Yes, this Ford has the twin-turbo 3.5-liter EcoBoost V6, but it has been retuned. In the 2018 model, the engine makes 375 PS and 637 Nm of torque, which is 10 PS and 68 Nm more than the 2015 Platinum we drove. More importantly, the Expedition EL gets the new 10 speed automatic gearbox, as evidenced by the 1-10 gear indicator on the gauges.

As a city drive, the Expedition EL is quite interesting. It actually accelerates well, with the 10 speed giving a nice spread of ratios for the engine to use. Where the EL can be challenging is in maneuvering. That's pretty much a given; you're moving as much real estate as a small studio apartment, and that would require a lot of patience and attentiveness on the part of the driver to negotiate tight city streets.

Thankfully this thing comes with sensors all around, but I would have wanted some cameras on the front or on the passenger side. Still, there's quite a learning curve to maneuvering the size of the EL, and it's not something you'd want to be driving if Waze took you on an urban “expedition”.

On the highway, you'll love it. The ride is superb, and it feels properly at home with a long straight road and plenty of good tunes in your playlist. The V6 cruises like a winner, but the transmission performs like a champion; it can do 100 km/h at about 1400 rpm in 10th gear, or 10th speed. Actually, 100 km/h on the speedometer has a “real feel” of just 60; I actually had to check the gauge to make sure I'm not going over because, well, there are now speed cameras all over our expressways. 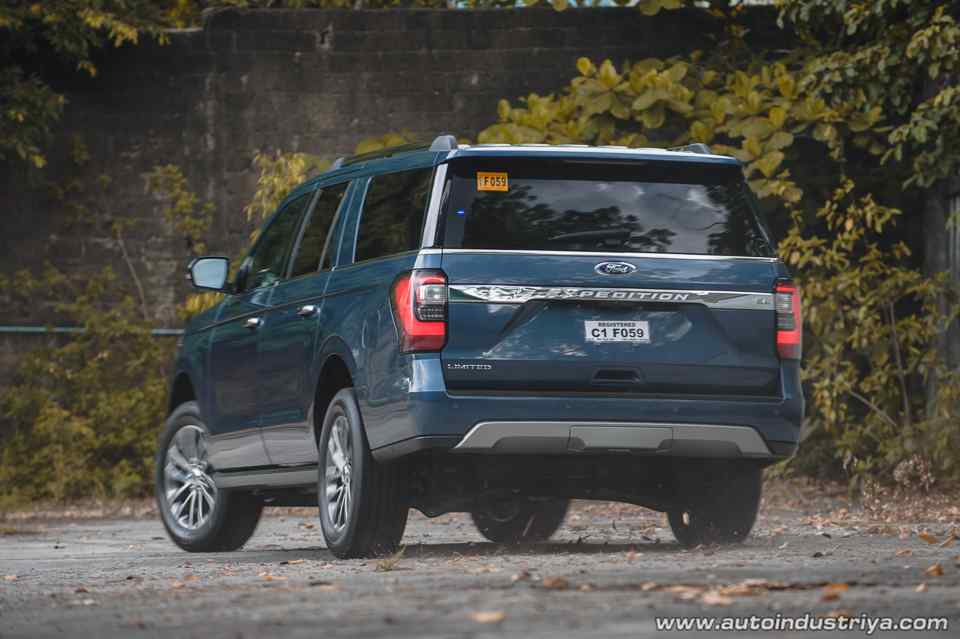 Highway (or freeway, for you Americans) cruising is really what the Expedition was made for, and also for pulling trailers. Normally, we don't do that in our market, but just in case you do have to pull a boat, the Expedition is rated for Class IV hitches, meaning it pull up to 9000 pounds ( just a bit over 4000 kilos) if you install a hitch to the frame. Mind you, I said to the frame. To illustrate the significance, we'll take a look at the Explorer Sport. Despite having the same turbo V6, can only pull just over half at 5000 pounds. The main difference between the Explorer and Expedition is the construction; the Explorer is a unibody/monocoque, while the Expedition still has a frame/chassis underneath the body. Higher rated hitches are only found on the more robust body-on-frame vehicles like the Expedition.

That rating means the EL can easily handle a trailer (typically around 1500-2000 lbs) with a variety of cargo that's within the limit. Got two jetskis? They typically weight about 800 pounds each, for a total of about 1600 lbs. Got a race car? Most subcompact racers weight less than 1000 lbs. Got a 21 foot powerboat with a big outboard motor? They weight about 3500 lbs. Towing a pleasure craft like that would also be tricky given the weight, and so the Expedition comes with a safety system that reduces trailer sway. 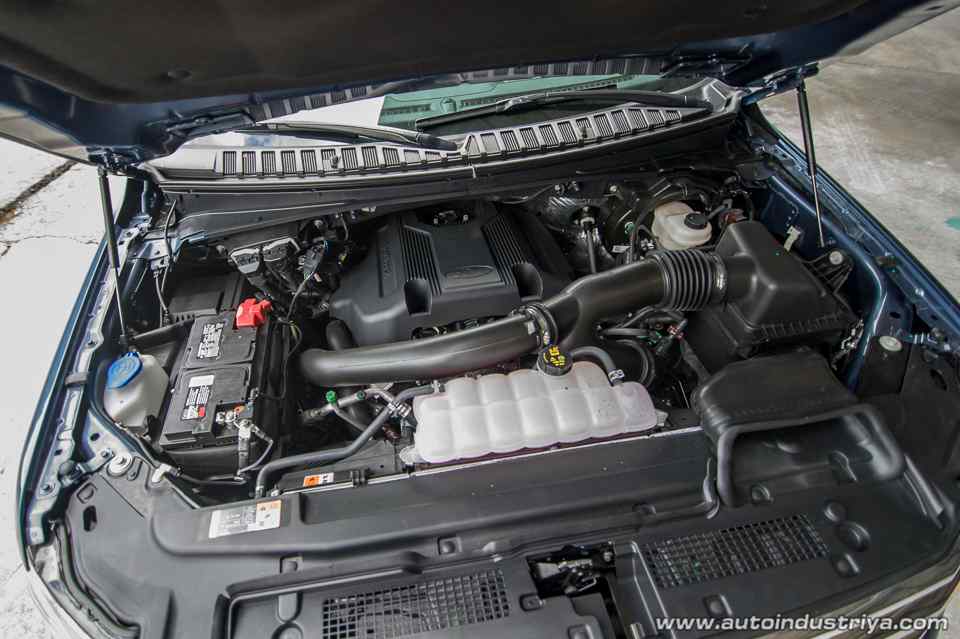 One of the major things that Ford is highlighting with the Expedition EL is the fuel economy. It's understandable; the Expedition's engine has become much smaller (remember the old 5.4-liter V8?) and much more sophisticated (and that V8 had just 3 valves per cylinder) than before. However, if you were expecting stellar figures compared to the old Expedition that you know, it's more like comparing shades of gray, rather than night and day. In the city and with our bad traffic, don't be surprised if you're getting anywhere between 3.5 to 4.0 kilometers to a liter (18-22 km/h average).  There is an automatic start stop that kills the engine when idling, but since the A/C cuts out with it, the feature would probably be deactivated most of the time. On the highway, the Expedition EL fares much better at 10.2 to a 10.5 km/l, and that's with 5 people in the cabin with lots of luggage. It's not bad, but really, with this much weight to move around, there should be an option for a diesel. 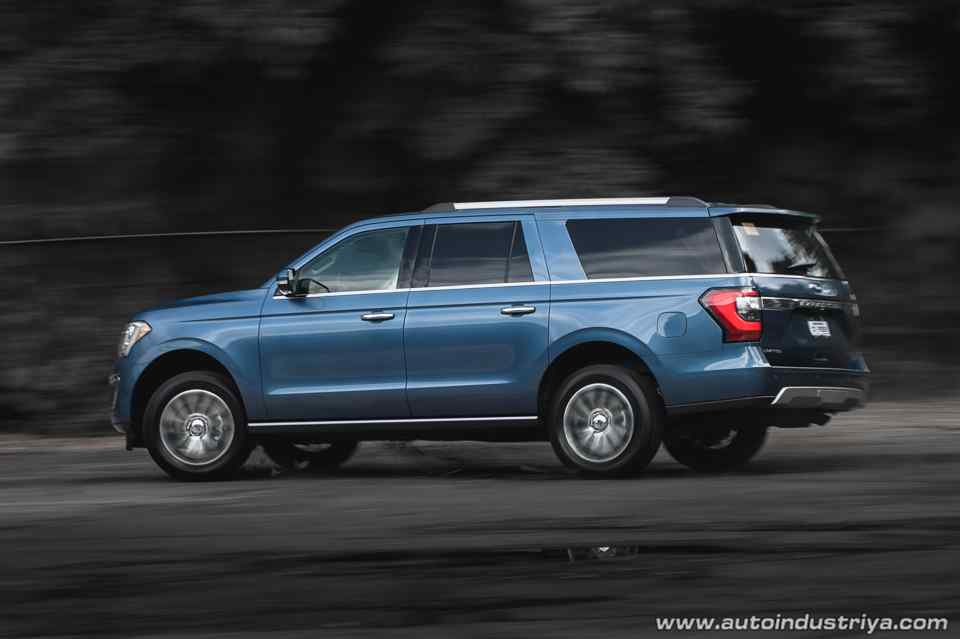 Yeah, it's still a body-on-frame vehicle with a new platform, but it almost feels like a unibody to drive. And this huge EL is able to corner far better than the old model, able to hold its weight if you decide to pick up the pace going up a mountain road. Don't get me wrong, it's no lightweight by any definition; you still have to treat this Ford flagship like a ship when you try to make it around corners at speed, but its much nimbler than before. Whereas before it drove like a supertanker, now it feels more taut and proper. Like a yacht.

What Ford did to make the 2018 Expedition EL is, I think, a step in the right direction. There are some things I would change or add (halogen lights, really?), but overall, I do like the versatility of the size and the comfort proposition. Fuel economy could be better, but we knew that coming in anyway. Besides, if you're paying PhP 4,258,000 for this 2018 Ford Expedition EL (PhP 100,000 more if you want captain's seats for the second row) I don't think you'd be too bothered with fuel economy anyway.

We try out the small yet capable all-rounder of Mercedes-Benz, the 2018 GLA 180 Urban

It's loud and it's rowdy, but that's what makes the Subaru WRX STI a joy to drive