What thoughts quickly come to mind when someone mentions the word ‘hybrid’?

High tech? Hyper efficient? Practical? Boring? Perhaps all of them?

While hybrids contribute for a cleaner environment through less emissions, hybrids are not exactly the most desirable cars. Not unless you have the all-new Toyota Prius which looks unlike anything on the road today.

With a sleeker look paired with a new, more rigid platform, Toyota takes aim at making the hybrid more stylish while at the same time preserving its frugality. Now to find out if it will be able to deliver.

No matter how polarizing its looks may be, the fourth-generation Prius departs from its conservative design into a more aggressive and (dare I say) daring look. Penned the ‘Kammback’ profile, the designers drew inspiration from the hydrogen-powered Mirai and gave the Prius a distinct tail that has been abruptly cut off for better airflow (according to Toyota). Driving around town, the Prius garnered many stares and odd looks from passers-by who I reckon found it either good-looking or out of this world. 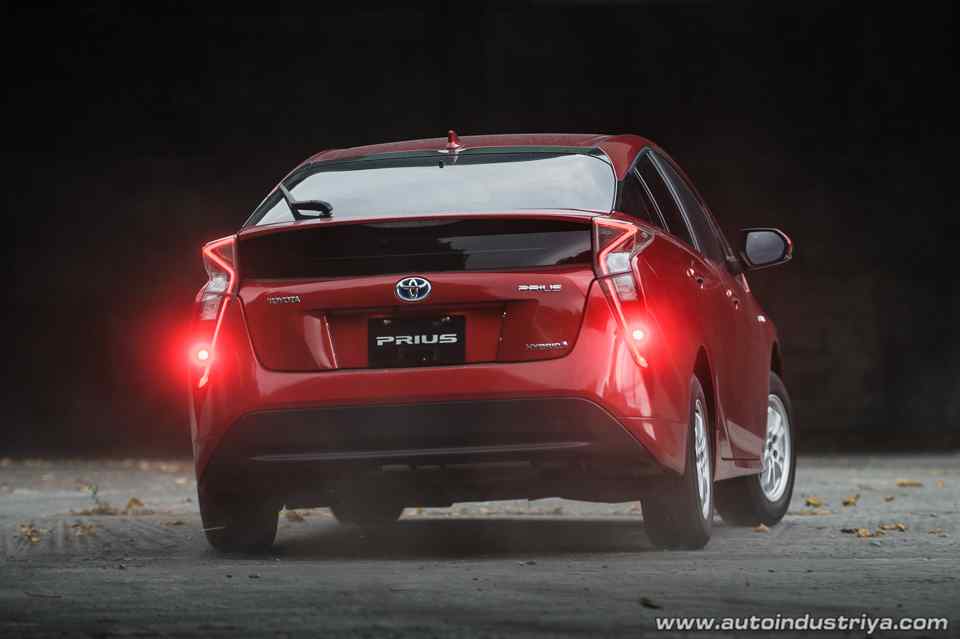 Personally, I’m fond of the Prius’ new look since I was not a fan of the third-generation’s design. Boomerang LED headlights and daytime running lights give the Prius a prominent face while the sloped roofline makes for a sleek and well-rounded greenhouse area. But it is perhaps the hybrid’s rear that I find the most interesting. Call it unconventional, provocative or wicked, the unique taillights are perhaps my favorite portion of the Prius thanks to the way Toyota designed them.

Overall, the sharp styling on the new Prius meant it was a head-turner wherever it went and was not afraid to show it. The front fascia could take some getting used to, but at least the Prius does not come off as boring anymore aesthetic-wise. 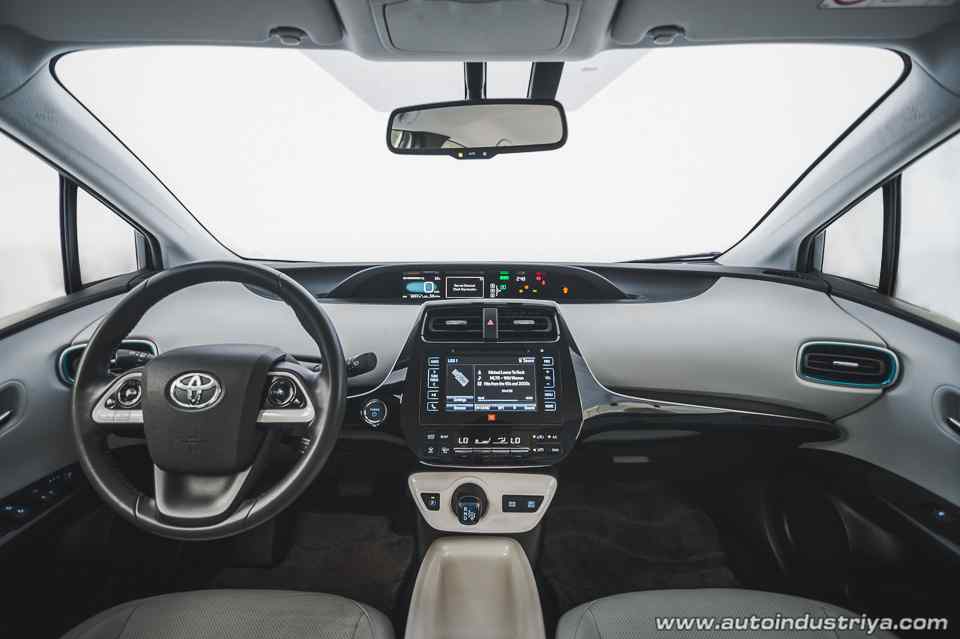 If there is too much going on outside the Prius, inside is a different story. Relatively simple yet ergonomic, the cabin blends both futuristic and tried-and-tested designs neatly. Leather upholstery envelopes both the steering wheel as well as all of the seats. Meanwhile, the center console is finished in white and is smooth to the touch. Pleasing as it is, I do find that the smooth finish on the console meant items such as phones, keys or coins can slide around the small tray.

The black and white motif works with the Prius’ new funky design and is a welcome change against the usual drabness of gray interiors in most cars today. Neat touches of gloss black trim, along with aqua blue contrast stitching on the seats, also give the Prius a more upscale feel.

Placed at the center are the 7-inch touchscreen infotainment system and 4.2-inch instrument panel with multi-info display. The graphics on both systems were pleasing to the eyes and the larger display meant it was easier to see the car’s average fuel consumption, tripmeter, system status and other relative information. Audiophiles will be glad to know that the Prius also comes with a 10-speaker audio system courtesy of JBL. It filled the cabin with crisp audio and drowned out outside noise for a more comfortable ride. 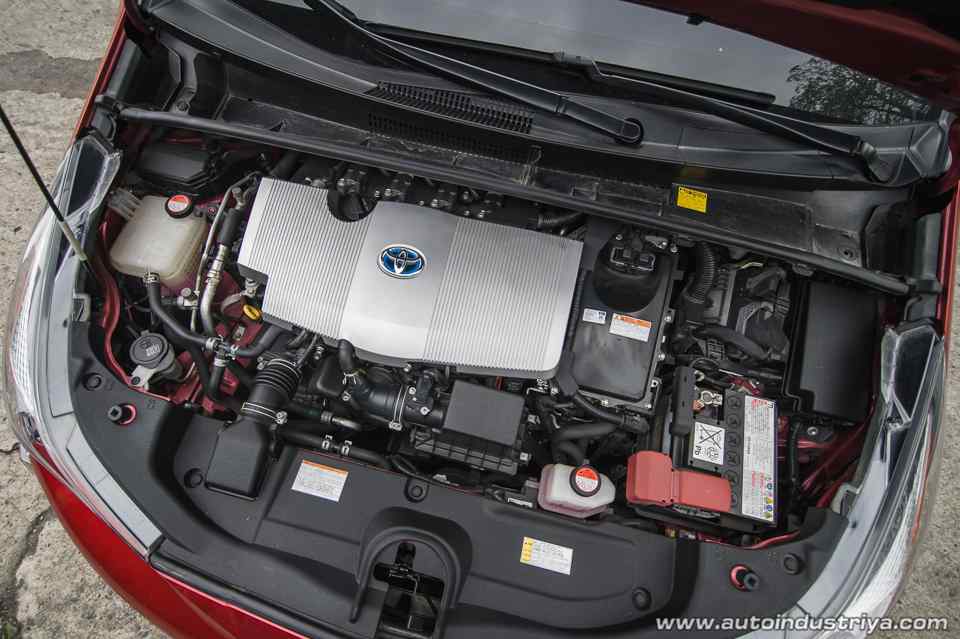 With a press of a button, the Prius let me know it's ready to go with a sound of a beep. That's because the Prius always starts up on electric mode, provided the batteries have sufficient charge. Put it in drive and the car sets off with only the electric motor providing whisper-quiet propulsion.

With the Eco Score Display, I was able to monitor how much input I was putting on the accelerator. Drive leisurely around the city and the Prius will carry on forward with just electric power. Push it beyond the halfway mark and the Prius seamlessly switches from the electric motor to the 1.8-liter engine. It’s so smooth in transition that the only way to notice it is to either look at the multi-info display or closely listen in on the powertrain.

Around city and town roads, the Prius was able to return more than 20.0 km/l of fuel. On clearer roads, the Prius can actually average nearly 23.0 km/l which makes it even more fuel efficient. On the highway, fuel consumption slightly dips as it only capable of returning between 17.0 - 18.0 km/l. Why? At highway speeds, the powertrain makes use of the engine most of the time, not the electric motor.

Should one put the pedal to the metal, both the engine and electric motor work in unison to provide faster acceleration. With it, overtaking with the Prius was surprisingly easy as it provided additional pulling power. One can even set the car to ‘Power’ mode which makes use of all available energy for quicker accelerations. Other driving modes available include ‘Eco’ and ‘Normal’ which I used most of the time.

Release your foot off the accelerator and the powertrain reverts to electric power. Thanks to regenerative braking, the system can recharge the batteries while on the move. The system can also recharge itself while coasting down an incline or while the engine is running. 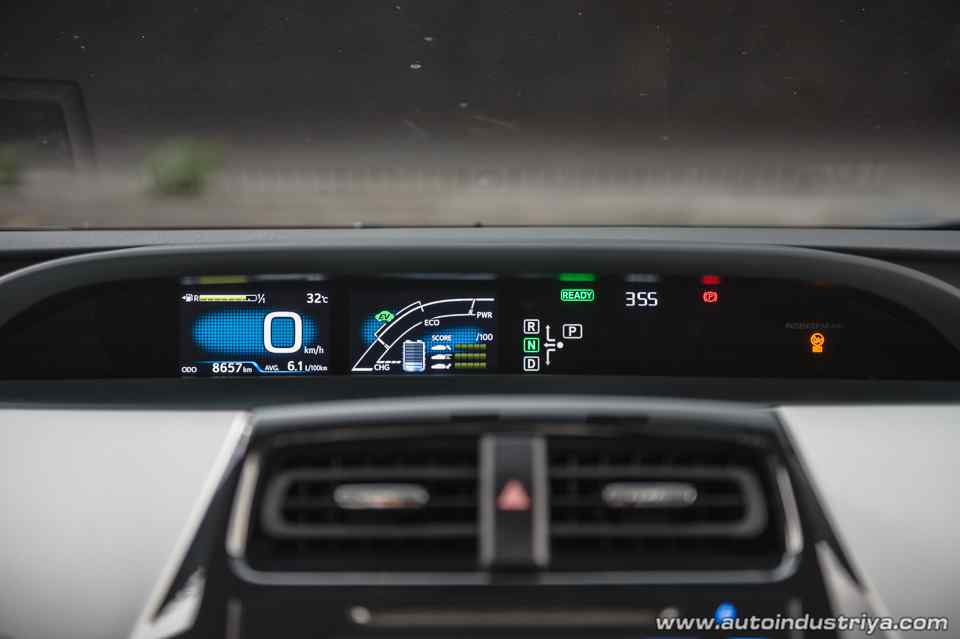 Hybrids aren’t exactly known for their agility but Toyota plans on changing that notion. Thanks to the Toyota New Global Architecture (TNGA platform), the new Prius felt more planted when taking corners. Granted, you do still feel the weight of the batteries when taking tight turns but it is an improvement over the old car nonetheless. The electronic power steering (EPS) was finely weighted although Toyota could have made it deliver more feedback as it was rather numb.

Ride quality was also good on the Prius as it went over rough roads, rutted streets and potholes admirably. It is slightly firmer compared to the third-gen model but at least it did not felt as wayward. The thick Yokohama A Spec tires also helped in delivering a lofty ride for the Prius.

As far as cabin space is concerned, the Prius was also able to deliver thanks to generous legroom and elbowroom. There is sufficient headroom for both the driver and front passenger. While there is also plenty of space for the rear occupants, the sloping roofline meant that tall passengers may find headroom to be quite lacking.

Ample luggage space is also available in the Prius thanks to its bigger dimensions. Rated at 502 liters, one can pack away a week’s worth of bags in the Prius. Fold down those rear seats and the humble hybrid can also carry long loads with ease. 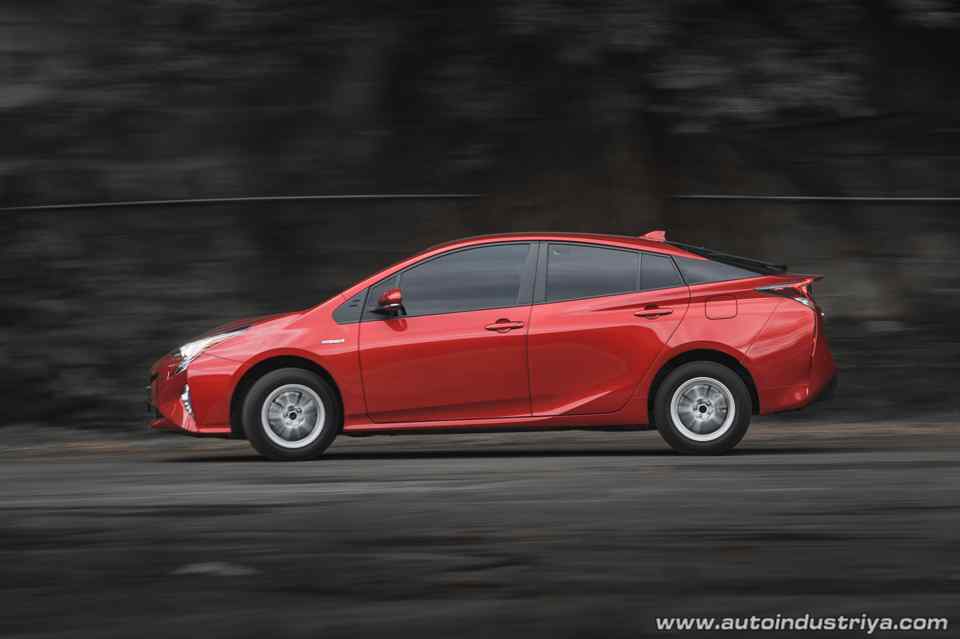 As much as the Prius received many improvements, there are still some gripes that can be improved upon. For starters, rear visibility at the back is poor as the rear spoiler gets in the way of the back window. The steering wheel, even when placed at its highest setting, is still quite low and can be a problem for taller drivers. The heater controls for the front seats are placed well below the center console which can be difficult to switch on or off. Better tire noise insulation could have been done as well since the Prius does come with low-rolling resistance eco-tires.

Those that want to lessen their carbon footprint and at the same time be the center of attention, the 2018 Prius can do both. Here’s to hoping that the government will be able to introduce more incentives for buying hybrids.

Need all the bells and whistles in a fast, high-tech seven seater? Check out the Ford Explorer in top-of-the-range Sport trim

While it has new engine, the updated Mitsubishi Strada retains the character that makes it a solid choice.