Let's face it: trucks, buses, and PUVs have quite a reputation. No, not a good one.

They are easily some of the most feared -and loathed- vehicles on our roads, right up there with armored cars and the occassional convoy complete with bodyguards in a chase vehicle.

But bad as the general reputation may be, let's put a hold on the judgment of trucks for the time being because we're going to get behind the wheel of a few of the new trucks, buses, and PUV prototypes from Hino Philippines. And maybe -just maybe- we can get a new perspective of what it really is like to drive these big boys.

Before even getting behind the wheel, the first order of our day with Hino is a briefing.

Because of the sheer size, driving a vehicle like a truck or even a delivery van is going to be very, very different than the average SUV or car. Those who have driven vans -whether its a family van or the long-selling L300- would be familiar with a vehicle where the wheels that turn are below or even aft of the driver; meaning you'll have to compensate when making turns whether the radius is tight or wide.

While being high up off the ground over and above everybody else gives the driver a very good view up front, seeing what's going on around the vehicle is much more difficult. You're pretty much limited to just over 180 degrees of vision if you're driving a Hino 700 series tractor head or even the 500 series wing van; the cargo prevents the driver from seeing what's behind or off to his flanks. And so mirrors are the way to go, and of those there are a lot and with plenty of variety.

And then there are the shifters. Each vehicle is different, and the bigger they are, the more complex they get. The primary concern is the shifter pattern; most cars have conventional shift patterns wherein you can basically hop from one to another without a problem. With big trucks, the shift patterns are very different; and it varies from model to model. When you hop on the driver's seat, you'll have to really pay attention to the gate pattern on the shift knob.

Lastly and perhaps the most important: the braking system. Hino's smaller vehicles like the Eco PUVs can be driven with minimal fuss, but the larger vehicles like the tractor head and the wing van have air brakes, and those are very different to get used to. More on them later. 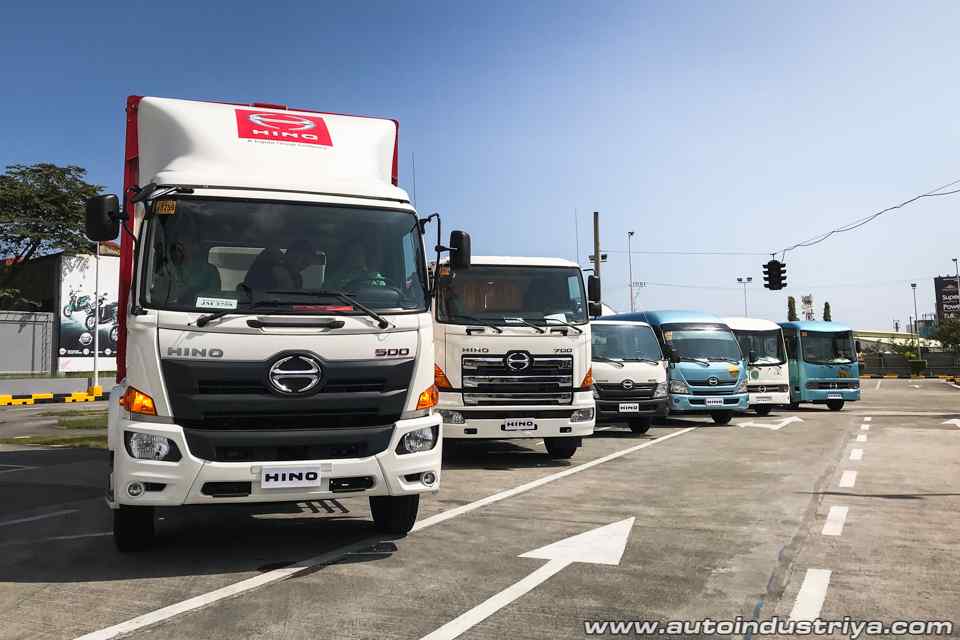 Before our test drive of what Hino Philippines has to offer the industry for logistics and mass transport, they gave us a briefing of the first thing that all truck, bus or PUV drivers must do before even getting behind the wheel: a walk around check.

Like in aviation where pilots walk around the plane to check the control surfaces (i.e. ailerons, rudder, elevators, etc.), drivers need to do something similar in order to verify whether the vehicle itself is roadworthy. It's not just a customary check that involves kicking the tires; what Hino advises is to physically verify that the vehicle's primary systems are good to go. The steering, the tires, the wheels, the frame, the engine, the lights, brakes and many more need to be checked before making a delivery or plying a route.

Being that large trucks and buses also require complex air brakes that run on compressed air, that is the component that needs the most attentive check. The expert from Hino says that many of the problems with the brakes that led to crashes have come from neglecting to check the air brakes fully. 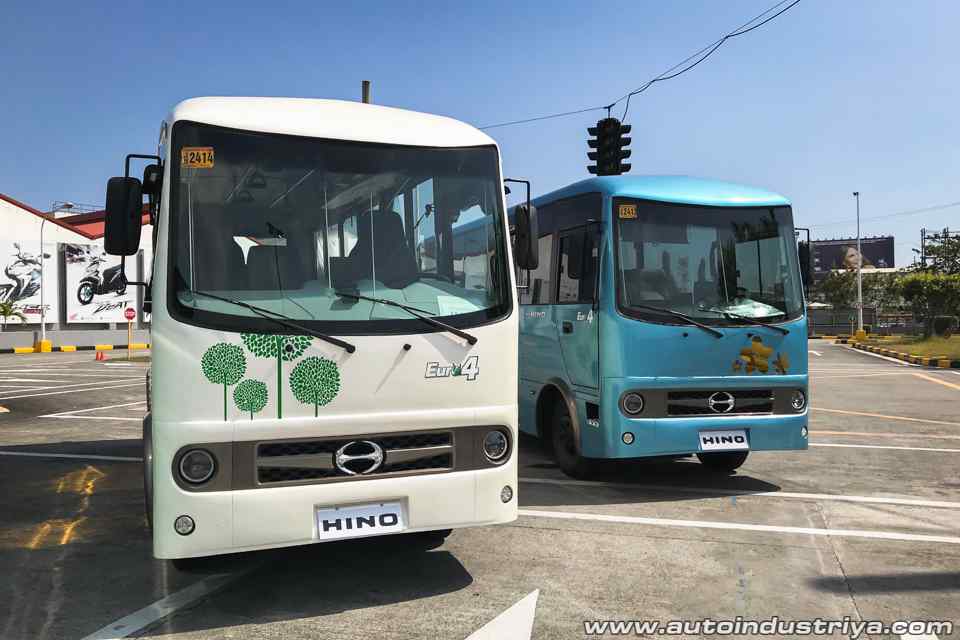 The Public Utility Vehicle Modernization Program (PUVMP) is really a bold move by the government, particularly the Department of Transportation. The program seeks to overhaul the public transport system with new vehicles that are far more comfortable, much safer, and definitely more ecologically-friendly with Euro-4 emissions ratings.

But while the effort is laudable, the program drew (and continues to draw) a lot of flak from a system long dominated by the Philippine jeepney; a vehicle that traces its roots to post-World War II Philippines where mechanics converted surplus U.S. Army jeeps to become shared taxis or jitneys. The jeepney lobby is very strong, which is why we've been getting frequent jeepney strikes due to their opposition of the PUVMP.

Let's set the politics aside; being based on a Hino 300 series chassis with a minibus body built specifically to be convenient for passengers, there seems to be a lot of potential with the PUVMP, at least from the position of a commuter.

Entry and exit is very easy compared to entering via the rear opening of a jeepney, not to mention that if you're out of seats, you can stand inside the vehicle comfortably; even taller Filipinos (around 5'8” to 5'10”) won't have too much of a problem. There are grab rails all around, meaning you can easily steady yourself if you're a standing passenger. And for safety and security, these PUVs have CCTVs all around. 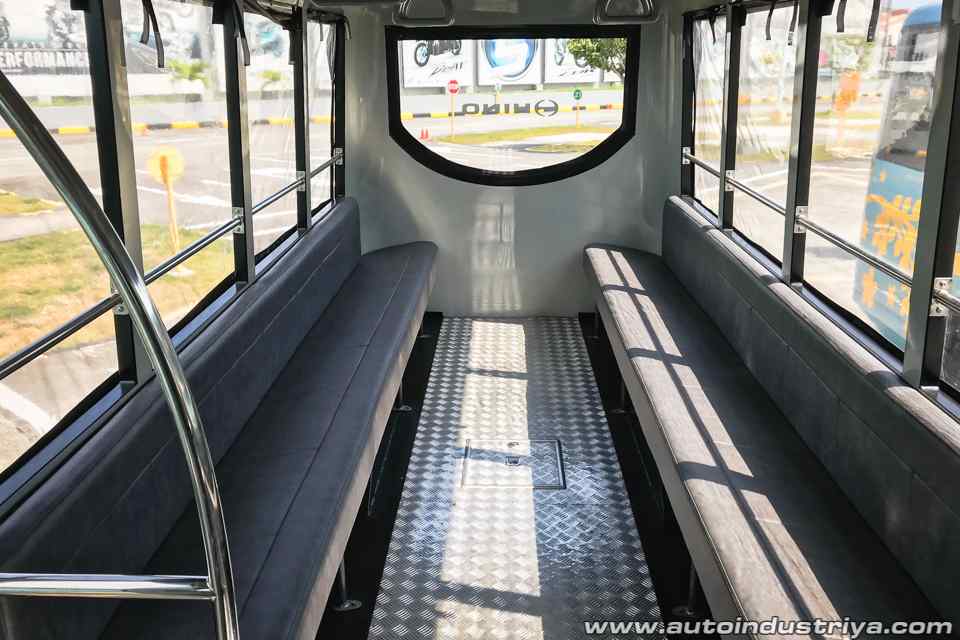 The seats for the peripheral (side facing) PUV model of Hino is definitely more generous than the average jeepney, and the padding is quite good for a public utility vehicle. The front-facing version of the PUV model could be better though; even for a 5'6” individual, your knees would already be hitting the backrest of the bench in front.

Driving the Hino PUV around the Honda Safety Driving Center's course (our venue for the day) is interesting. I have driven an owner-type jeep before and it's quite the experience, but it's definitely not a comfortable drive. This one is a lot better as the driver is on a nice, comfortable seat, and with power steering; something that's rare (or non existent?) on current PUV jeepneys.

Hino calls this the Eco PUV Class III, and it's the airconditioned version. Not all versions of Hino's PUVs are airconditioned, so it can be very warm inside especially in our noontime heat. Actually even the airconditioning on this grade PUV model was having a hard time dealing with the temperature; hopefully that's something they can address soon.

We couldn't really get the PUV up to speed, especially since the HSDC is quite tight for driving something this big. But from our short test, this modernized concept of our mass transport system is promising. There's less vibration, much less noise, and little smoke from the new 3.1-liter commonrail direct injection turbodiesel. Mind you, this is a new vehicle; what it's like to maintain (particularly the costs) could be the tricky bit. The only thing that really needs an upgrade is the airconditioning system. 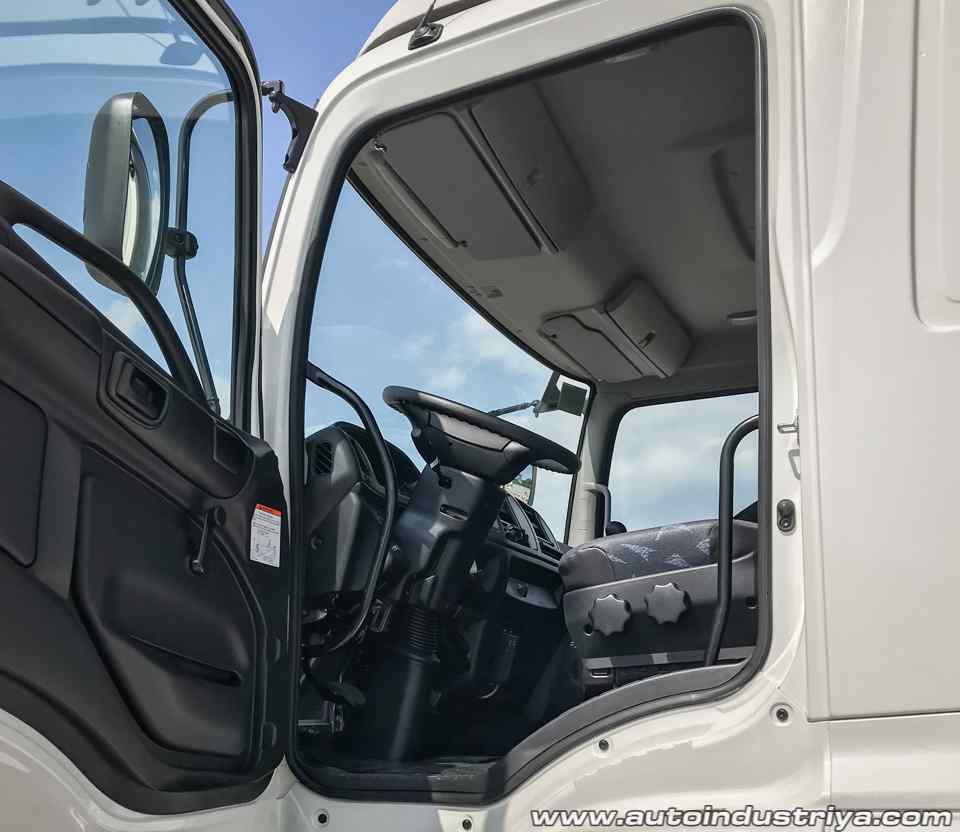 The vehicles we really wanted to try were the biggest ones: the 500 series and the 700 series. First was the tractor head from the 700 series. It takes quite a bit of effort and proper foot placement to get up to the cabin and onto the seat; by my eye, the seat itself about 6 feet above the ground.

Twisting the key results in a big judder from the below, firing up that big 6-cylinder turbodiesel that displaces almost 13 liters. This is a powerful machine, and that diesel makes 410 horsepower, but a gargantual 1,863 Newton meters of torque. It needs that torque to pull massive trailers with contailers or big liquid tanks; the 700 series is meant to be the backbone for big businesses in fields like logistics and fuel.

Before I even got going, I took a look at the shifter and saw a very different pattern. This thing has 7-speeds, but the shift pattern is unusual. You have to be mindful of how you shift, and thankfully my co-driver from Hino was calling out the gear I was shifting to. The truck requires that many gears because the engine only revs to 2,130 rpm. Mind you, at 7 speeds, this Hino tractor head is still relatively easy to drive; they have a version that has 16 speeds.

There really is a sense of power when you're behind the wheel of this tractor head, but when my right foot touched the brake pedal before making a 90-degree turn, the thing just came to a stop on a dime; it would have thrown us onto the glass had we not worn our seatbelts. That is the air brake system at work.

Unlike most vehicles that use hydraulics to transfer the input from the brake, big trucks like this use pressurized air from a compressor driven by the engine to activate the brakes. It's difficult to explain, but when you step on the brakes, the air system applies about 100 to 120 psi of pressure to engage the brake pads or shoes, whichever the case may be. If you've driven beside a massive truck with your windows down and heard an unusual whistling sound (similar to a blow off/wastegate on a turbo car), that's the air brake at work.

If you're used to the braking system of a car, it will take a while to get accustomed to the braking of a big truck simply because it engages so quickly and so forcefully; the 700 series needs it to be that way given the heavy loads it has to pull. I actually played with it a bit on the straights at the HSDC, but eventually I got the hang of adjusting my right foot to compensate for the power of the brakes. 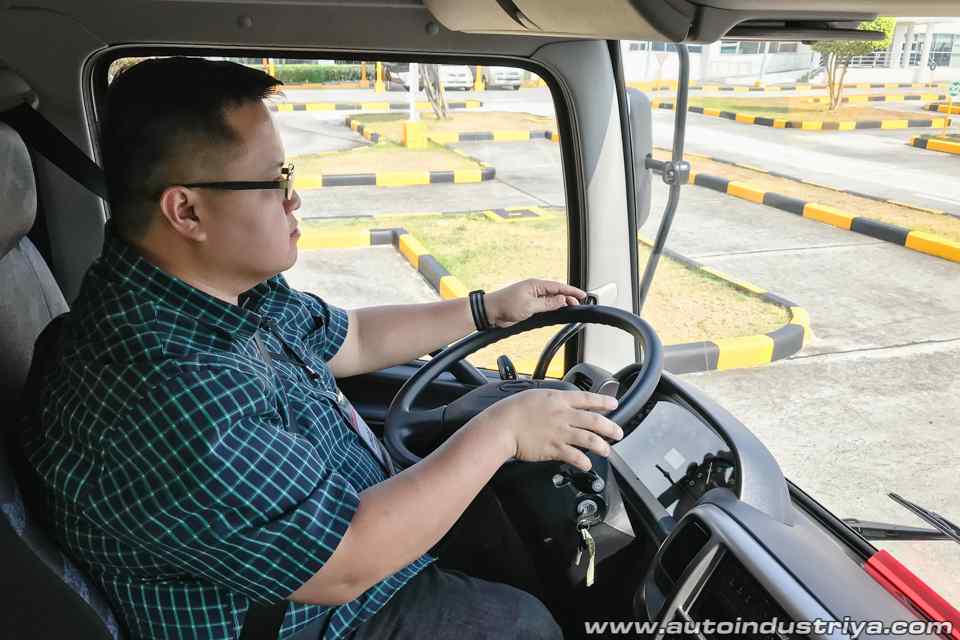 Throughout the afternoon I just hopped in from one truck to another, trying out the crane truck and the wing van around the track. The experience is definitely new and fun, but more importantly, it gives you an entirely new perspective of what it takes to drive these behemoths.

Behind the wheel and negotiating turns, yes you do feel a sense of power from such a big vehicle, but there's also a lot of respect involved. You have to inspect and maintain it diligently in order to ensure that it performs well and, most importantly, comes to a stop when you need it to. You have to respect the machine and take into account how it turns, brakes, accelerates. But more than all that, other motorists -myself included- should give the truckers a bit more respect.

Despite the many modern upgrades from Hino, the bigger the truck, the more stressful and more demanding they are to drive. It's not easy to maneuver them on roads where cars and motorcycles cut in and out of lanes at will, often not thinking if they're visible to the driver, and trucks have big blind spots. It's this lack of respect that often leads to an accident, be it big or small.