The Department of Transportation's PUV (Public Utility Vehicle) Modernization Program is easily one of the most controversial transport initiatives of the government, especially since many PUV drivers lack the resources to simply give up their old jeepneys for a modern but far more expensive replacement.

But the benefits to the riding public are very clear: safety, security, reliability, and comfort are just to name a few. And given the far better Euro-4 emissions standards, these new PUVs emit far less noxious gases. All of these are significant steps forward from the design that hasn't changed much since local mechanics started converting surplus World War II jeeps.

At the Isuzu Truck Fest that happened this past weekend at the SMX Convention Center in Pasay City, Isuzu Philippines Corporation (IPC) has revealed their three contenders, each customized by independent truck body builders. All of them comply with the new standards set forth by the DOTr's PUV Modernization Program.

The three models you see here use Isuzu's QKR77 cab and chassis as the base truck. The QKR77 features a strong steel chassis and a 4JH-1 TC engine; an engine that falls under the same J engine family like the ones used in the mu-X and D-Max. The 3.0-liter Euro4 BluePower direct injection turbo intercooler makes 106 PS with 230 Nm of torque and gets a 5-speed manual gearbox. The powertrain and reinforced frame enable the QKR77 to move a maximum weight of 4000 kilograms.

For safety, all these PUV prototypes are limited to 80 kilometers per hour and have a variety of CCTV cameras to monitor the cabin and the road ahead. There are emergency doors at the back; the primary doors are on the right side of the vehicles. All are airconditioned and all will have WiFi as standard. 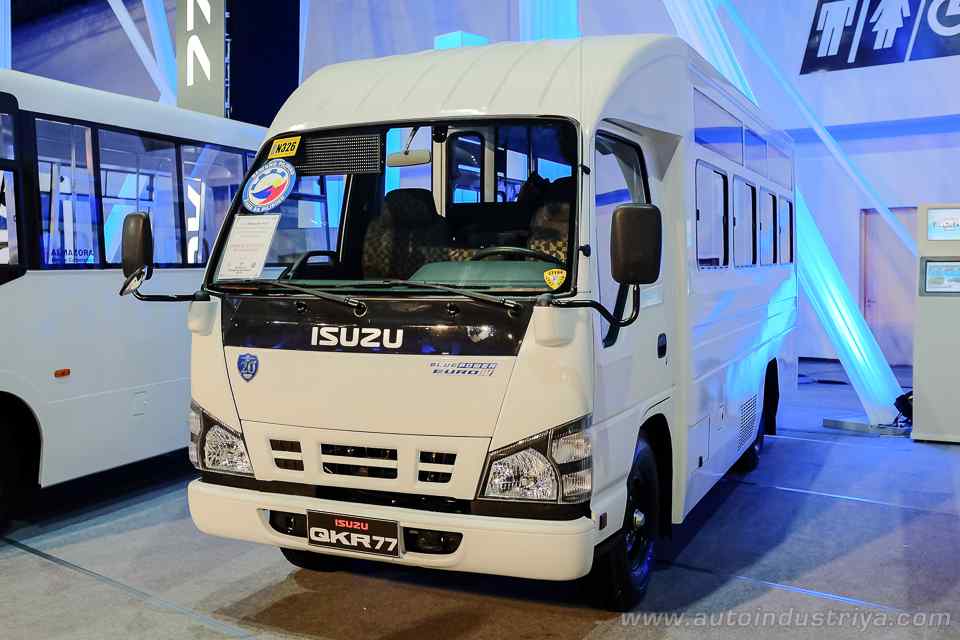 First up for the trio is the version of the QKR77 PUV made by Centro Manufacturing Corporation. Unlike the other two which have removed the original single cab in favor of a more bus-like body, Centro's version looks more similar to the L300 FB, but in a much larger scale. 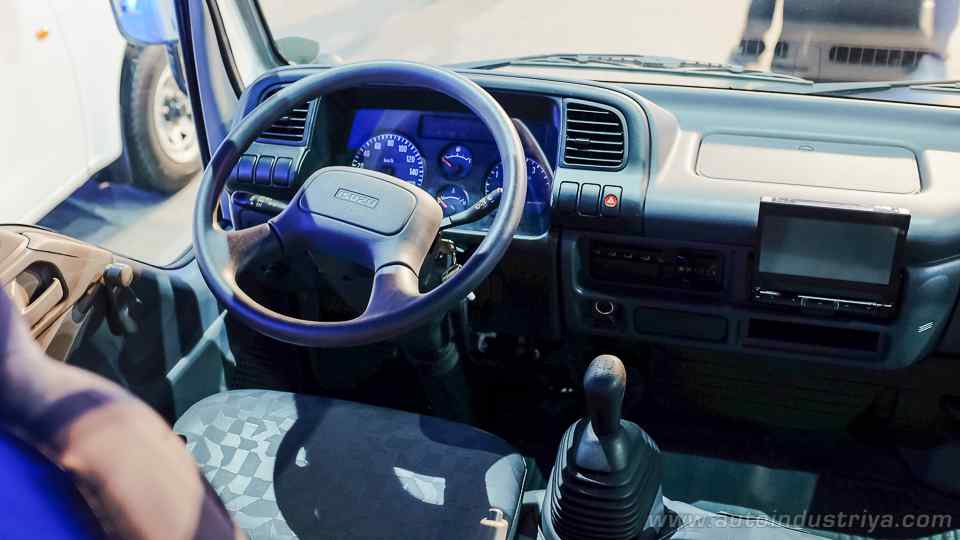 Upon entry into the main cabin, what was surprising was the presence of a Beep wireless payment terminal; a reloadable prepaid value card that you can also use to pay your bills, buy stuff at 24/7 convenience stores, and even ride the light rail transit systems in Metro Manila.

The body and rear cab are actually now a single cabin and fully airconditioned, though there is an LCD television screen that separates the forward cab and the main passenger cabin. The main cabin has two side-facing benches (peripheral seating) similar to a jeepney and mind you, the seat padding is soft for better comfort. Two passengers can also sit in front with the driver. 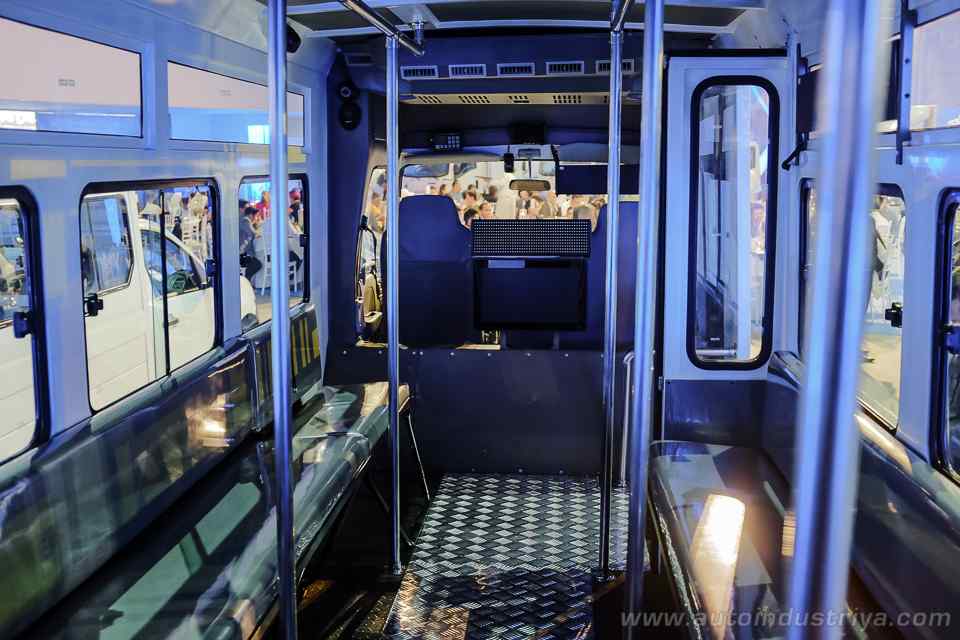 What sets this apart from the jeep is the height of the ceiling. My height at 5'6” (168cm) can easily walk about the cabin, though our Managing Ed at 5'10” (178cm) is just barely touching the ceiling. There are also plenty of poles and grab handles to steady yourself if you happen to be standing as the PUV gets going.

Being a PUV Class 2 model, this vehicle can accommodate more than 22 passengers both seated and standing. 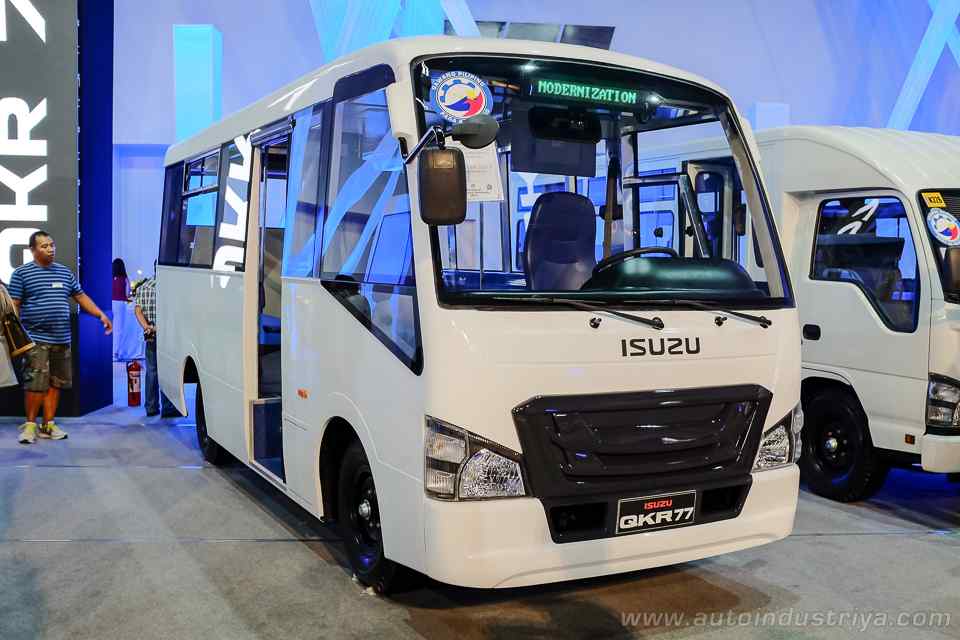 The version from Almazora, by our eye, appears to be the largest of the trio. And it's arguably the best looking: they put a D-Max/mu-X inspired grill up front made out of what seems like fiberglass. Just because it's public transport doesn't mean it can't look proper. 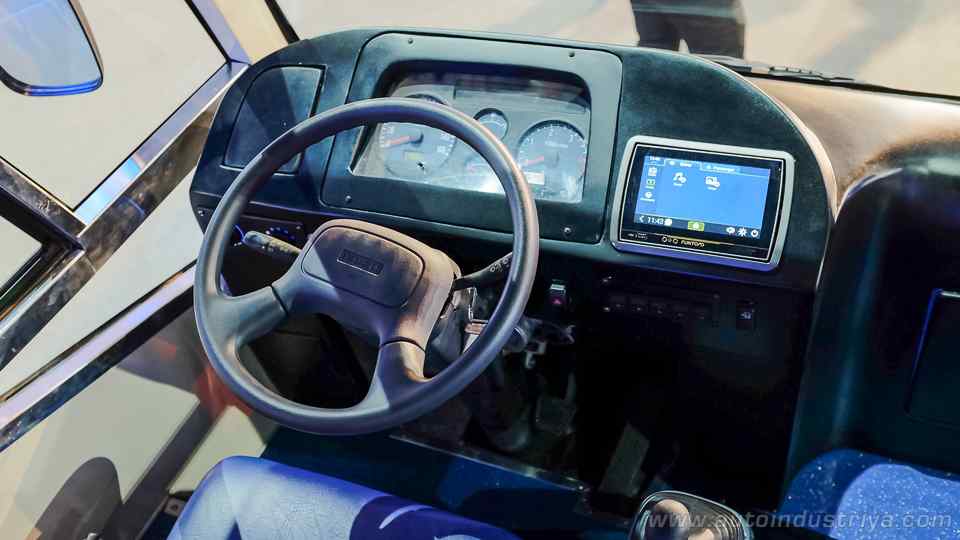 Like the Centro model, this Almazora PUV prototype has peripheral, side-facing seating, along with plenty of standing room. There are two more forward facing individual seats up front. There is also an LCD TV behind the driver that shows the route and perhaps some advertisements. Unlike the Centro example, this one did not have a Beep terminal fitted. 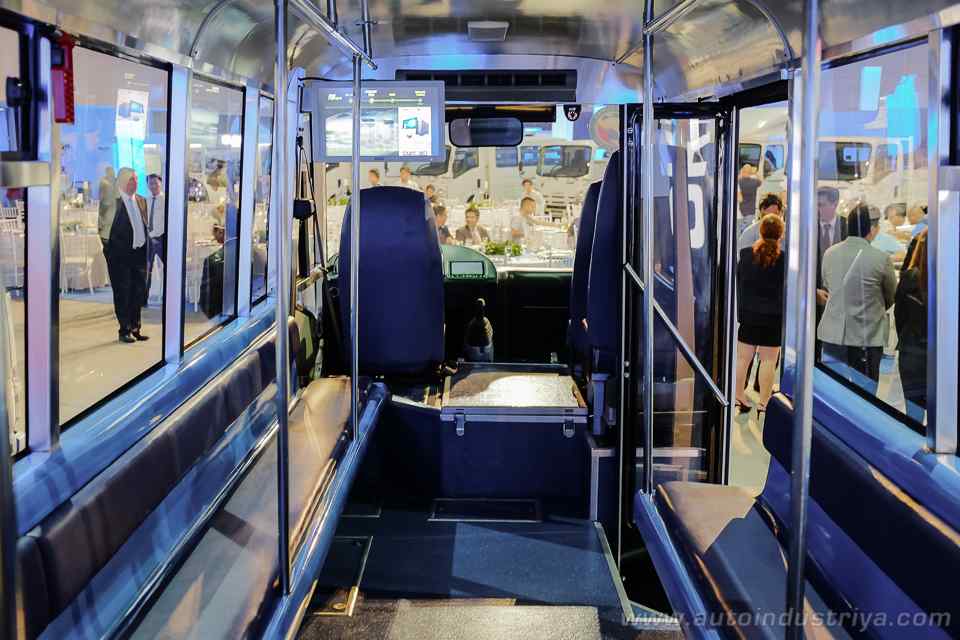 With the average height of most Filipinos being around 5'6”, walking about the cabin is easy. One thing I did notice that could be changed is the locked lid to access the engine from the main cabin. Surprisingly, the engine compartment's lid isn't covered in softer material or rounded for safety; hopefully they can correct that, especially since sharp edges can present a danger under emergency hard braking.

Being a PUV Class 2 model, this vehicle can accommodate more than 22 passengers both seated and standing. 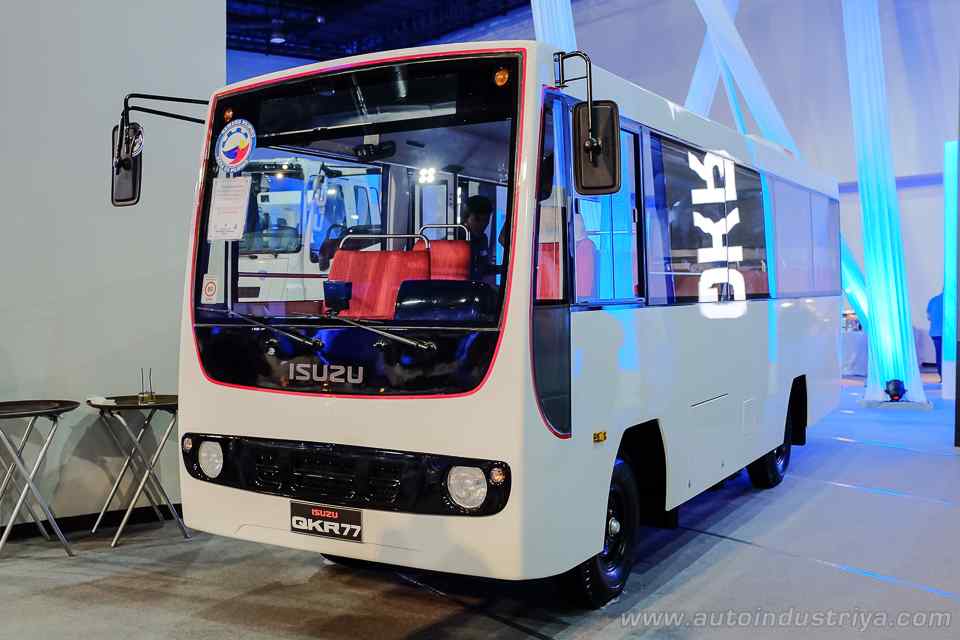 The third and final PUV prototype in Isuzu's expo is quite different from the other two. Unlike the examples displayed by Centro and by Almazora, the one made by Santa Rosa Motors was built to PUV Class 3 specifications. 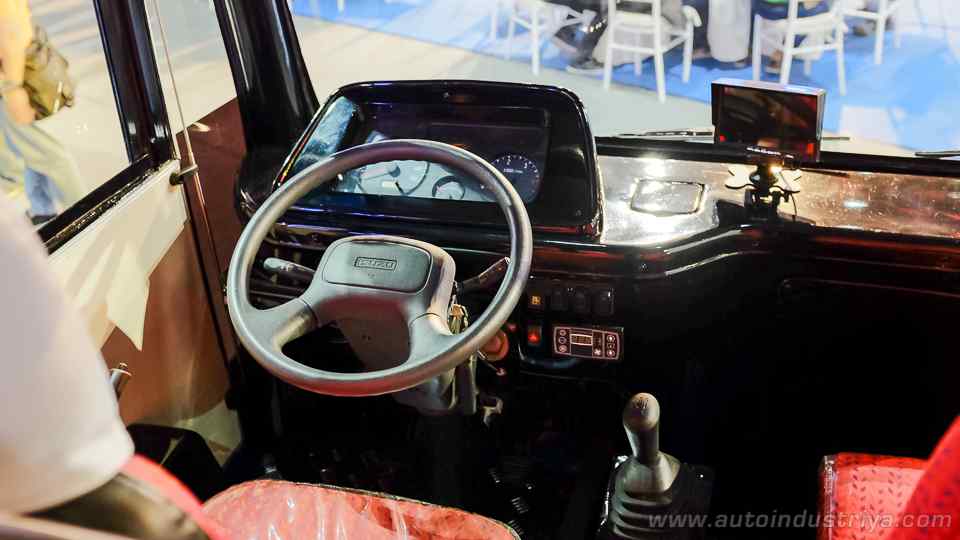 The version built by Santa Rosa doesn't seem to use any exterior body parts from the QKR77 base truck; even the headlights are of the classic round lamp variety. Like the Almazora, this version has a minibus shape, and entry is at the side. 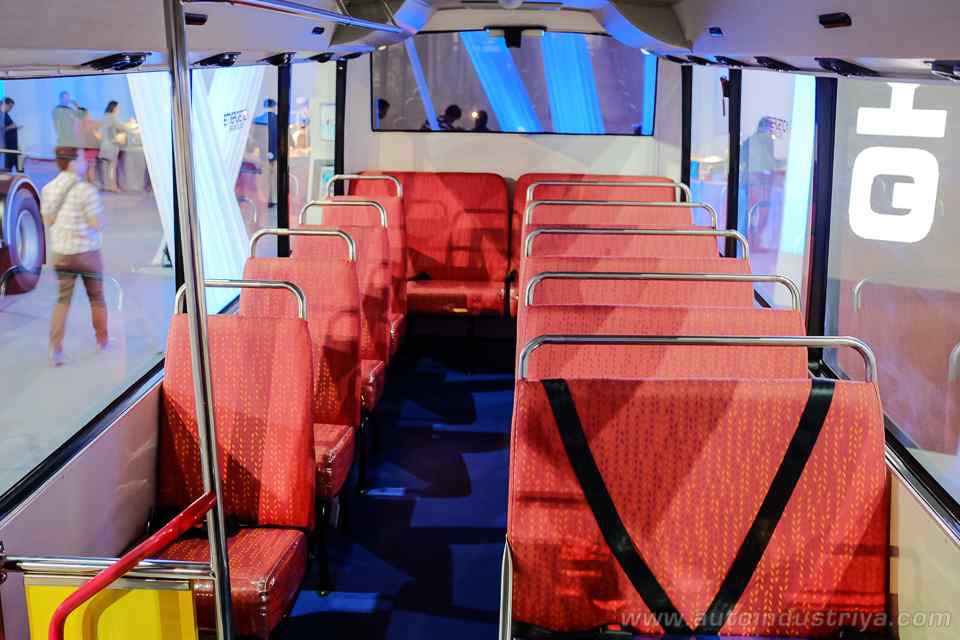 What sets the Santa Rosa PUV apart are its forward facing seats as opposed to the peripheral seating of the other two. This configuration would make this PUV more suitable for longer trips. Also notable is the presence of a roof-mounted airconditioning unit with vents for each row for comfort.

Unlike the two PUV Class 2 models that can take more than 22 passengers seated and standing, the Class 3 from Santa Rosa can take on 22 people, all of which have to be seated.

The three prototypes displayed by Isuzu and their truck body builders are indeed promising examples of how public road transport will move forward in the near future. We do wish we could have seen other examples that fit into the other classes like Class 1 with a capacity of 9-22 seated passengers and Class 4 with more than 22 seated passengers and with provisions for cargo space, making it effective for longer, provincial routes.

Without a doubt, the new PUV prototypes from Isuzu that comply with the new program definitely prioritize passenger comfort, safety, convenience and security above all. There are some things that we feel were overlooked like making anti-lock brakes (an essential crash-preventing feature) standard, but perhaps the most important is the pricing.

Isuzu hasn't released the pricing of the actual PUV units, but given that the bare QKR77 cab and chassis already costs PhP 1,095,000 before all the custom PUV work that could bring the price closer to PhP 2 million, it's difficult to see how an average driver can manage the costs. That has become the sticky issue about the PUVMP.

Hopefully costs can be brought down and financing and/or subsidies from the government can make them more attainable because really, this is the long overdue future of public transport in the Philippines.

Driving big trucks: A day behind the wheel with Hino

Ever wondered what it's like to drive a big truck, bus, or a new PUV model?