The great thing about the Philippines is that we literally 7,107 islands to choose from. That much is clear.

Now that I think about it, I've only been to a few. Luzon, of course, is where we live. But in the last few years, I've been able to visit Mindoro, Sablayan, Cebu, Mindanao, Samal, Badian, Mactan, Lagen, Apulit, Batanes, Boracay, Panay, Coron, Dumaguete, Bohol, Busuanga, Bulalacao, Samar, and Leyte. Believe me when I say, each place has a character all its own.

Now I can add one more to that list, and that is the island of Siargao. And this place truly has a character that is incredibly unique, and rather fun. 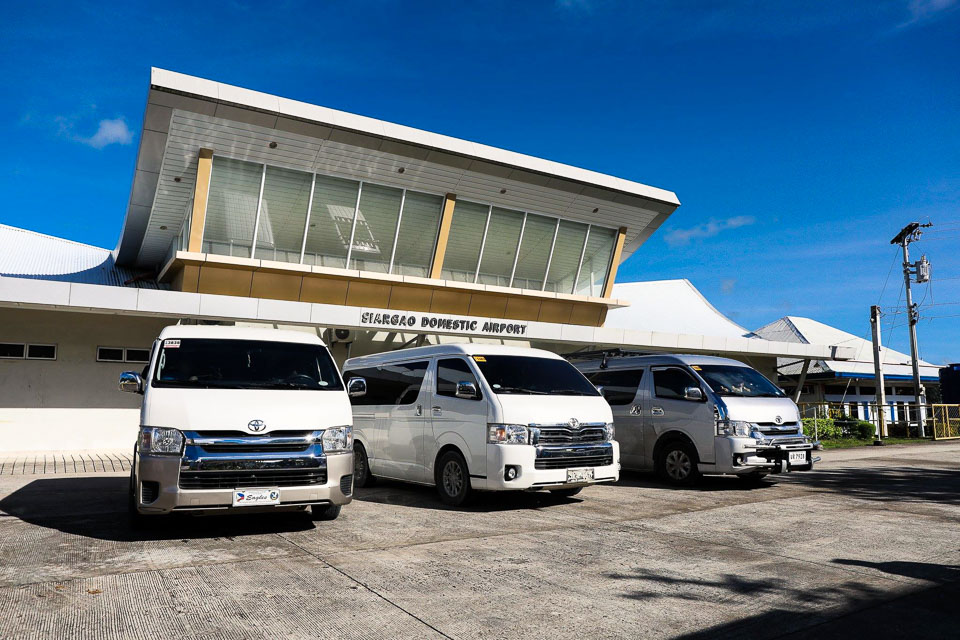 On the outside, it seems like any other remote island amongst 7,106 others in our archipelago, but there's something different, and we've got three days to find out what it is in the Toyota Roadtrek.

The Toyota Roadtrek is perhaps the most unique of the domestic drives in that it showcases the different sights, sounds, experiences, activities, and people of the many different places in the country. And they've been doing it for well over a decade now. This year, we went to Siargao, an island facing the Pacific, and being that it faces the largest ocean means it's got great surfing. And no, not the online kind.

Actually right at the moment we landed at Siargao, we already got a sample of what it would be like: not enough shuttles arrived. Apparently not enough drivers were ready for us, so we ended up waiting for a good 45 minutes for another one to arrive. 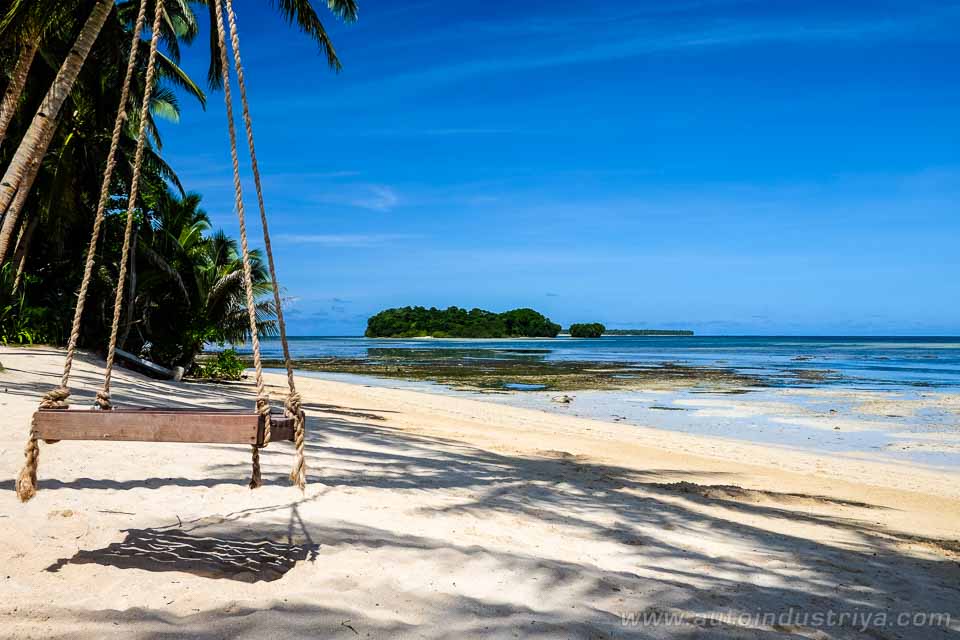 It's not something to take against the Siargaonons; actually, it's something you can expect of an island that's experiencing quick growth in economic opportunities. Once on the road, that growth is clear. Infrastructure development in Siargao seems to be at full throttle; all these roads are brand new. It's still the ribbed concrete kind, but that's much better dirt or gravel.

The reason why the government is investing in Siargao is its potential. In the last few years, many new hotels and resorts have popped up, owing to the growth of the tourism here. Surf-tourism, to be exact. And the view outside tells you why: that's the Pacific Ocean, and those big waves have nice, long, white caps on them. 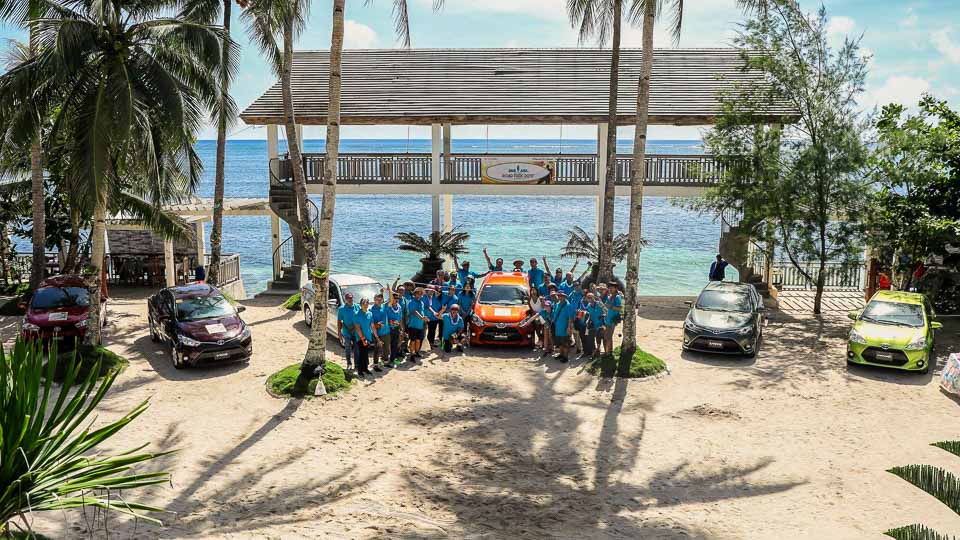 When we did get to our send-off point around 11AM, we took a nice breather to relax from a morning longer than expected; given my home's distance from our primary airport, I've been up for 8 hours already. All that didn't matter though given the freshly opened coconut with a straw poking through the top. And since it's chilled, it really does melt it all away.

Roadtreks have a few little games here and there for points overall in the day, but that's not really important for you. But the most important game was perhaps the one where we had to play for the car we would drive.

The newest among them was the Wigo; a car that Toyota had literally launched on site. It's got a new look, new features, and even a new engine, but we're not driving it. The brothers Vios and Yaris were are also present, both recently updated with new features, transmissions, and new engines, but we didn't end up driving it either. There was even a Prius C hybrid amongst the field, a car that we're confident is probably the first ever hybrid to ever set a wheel on this island, but we didn't get it either. As luck would have it, we drew the best one of the lot: a Toyota Camry. 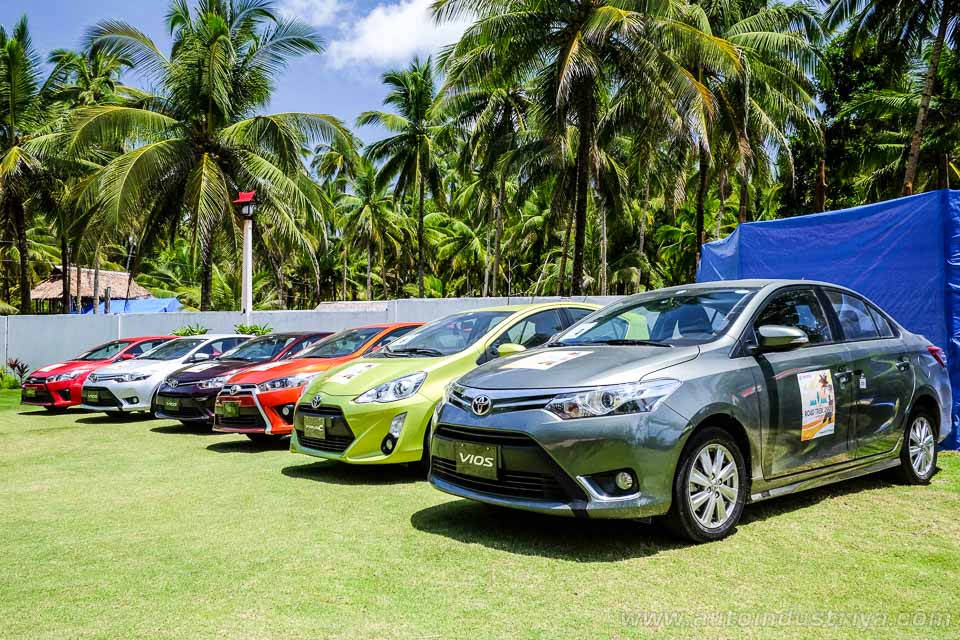 A Camry on Siargao's roads are probably the most unusual sight here even though there's actually a Prius in our midst. But regardless, I'm glad we got it because a big comfortable executive saloon will be perfect for a day of driving around a tropical island with concrete roads, even though it's not sporty or very “surfy”.

Seeing Siargao through the windshield, it's easy to assume that this is just like any island amongst our archipelago. A closer look yields something else, especially with the presence of so many scooters with makeshift racks to hold surfboards as tourists -Westerners, mostly- hop from one surf spot to another. These bikes actually remind me more of Lombok in Indonesia, another island with a good surfing culture.

A little ways down the road, we arrive at our first stop. It's called Jafe Surf and Sail; as the name clearly states, they're all about watersports. Yet despite its name, there's really a very chill vibe about the place, a testament to its owners. The husband and wife pair are they are more than happy to show you around. 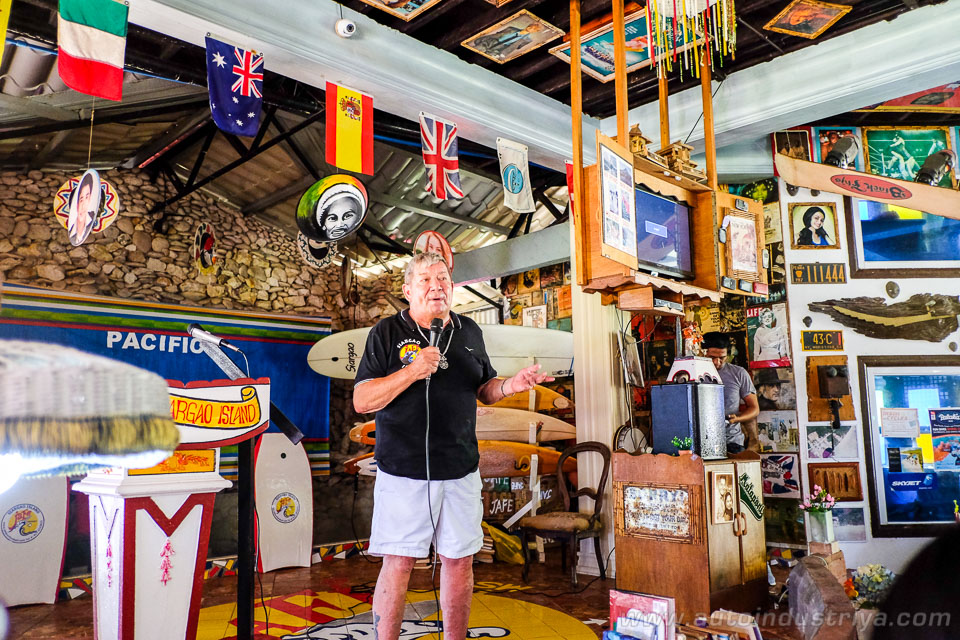 Walking inside is quite a treat; the walls, doors, tables, and ceilings are all decorated -peppered, really- with all kinds of memorabilia. License plates, pictures, posters, sports gear, costumes and more can be seen at Jafe, including a ship's helm. These were all brought and left by the many travellers and surfers that walked in their doors to stay for a couple of days, weeks, or even months at a time; a clear indicator of the exceedingly chill vibe of the place. Really though, all I wanted was to order a beer and relax with my feet in the sand, but we had more places to visit along our way.

Siargao's new and empty roads are quite inviting, tempting the driver to open up the tap and have a bit of fun. But while it may seem perfectly fine to do so, locals -much like any province- have built their houses right up to the road. No go on the speed runs; safety first.

One thing you do have to watch out for while driving on Siargao are the habal-habals. If jeepneys are makeshift share-taxis, so too are the habal-habals, except instead of a jeepney as a basis, they use a motorcycle. Much like a local boat with outriggers, locals build outriggers on theirs as extra seats for 4 to as much as even 7 people. Yes, it's dangerous, but on islands where cars really are luxuries and fuel is expensive, a makeshift two-wheeled share taxi makes odd sense. 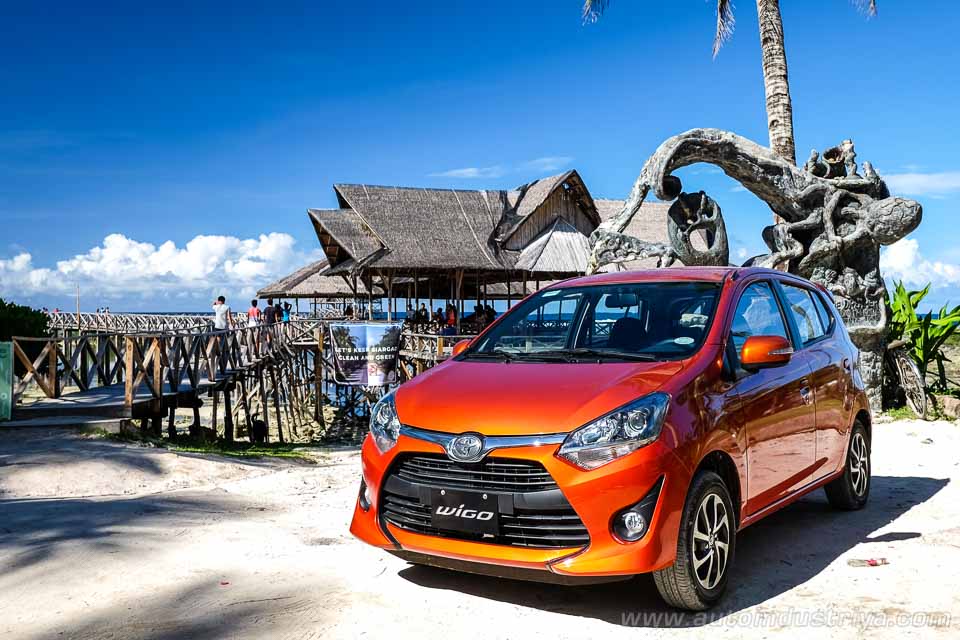 Our penultimate stop for the day was Cloud 9. No, it's not a factory for the candy bars of the same name (though some of us wished it was); instead, it's Siargao's prime surfing spot.

There are many stories about how it got its name. Some say that it's because it's a heaven for surfers with the Pacific ocean producing big waves to ride. Some say it's because the waves themselves are shaped like a perfect 9. Some even say it's because the first surfers there happen to have been eating Cloud 9 candy bars. Whatever the case may be, this area is where you go to get stoked. And that's the first time I've ever used that word in an article. 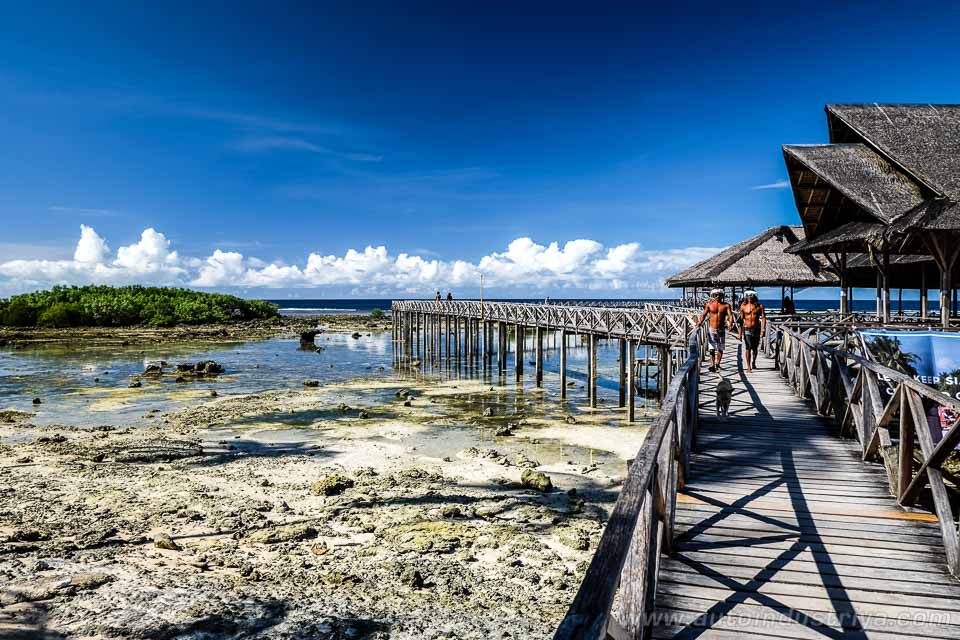 Personally, I'm no surfer, though I am quite envious of those who do. From my vantage point at Cafe Loka, a beachside cafe that looks out to the water, the surfers seem to be having quite a bit of fun. A short 10 minute walk and I was past the boardwalk and onto a big hut on stitlts to watch those who ride the waves the way they're meant to be enjoyed. I only wished the tide was a bit higher because the waves were further out to be seen without binoculars.

For those of us who didn't surf, Cloud 9 is best enjoyed at Cafe Loka, and with one of their signature Mango Bowls. The dish is difficult to describe, but it's a mix of some sort of power shake, a couple of nuts and garnishes, and scoops of mango. More importantly it's ice cold, perfect for cooling down after a day on the road, or hours on the waves. 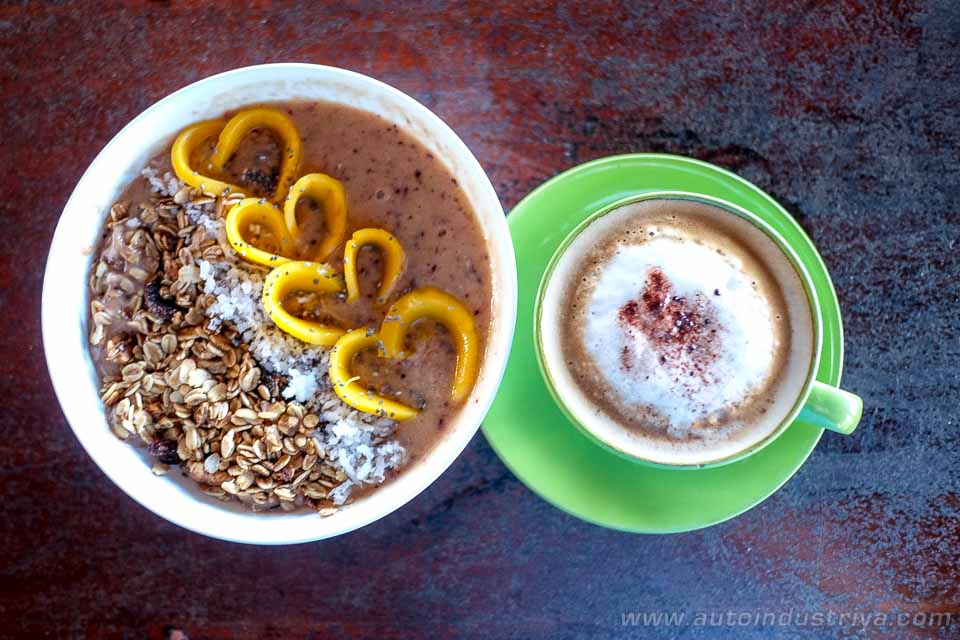 Another short drive after with the Camry and we arrive at Siargao Bleu resort. Located just at the outskirts of the municipality of General Luna, Siargao Bleu is one of the nicest resorts on this island. The pool is fantastic, and the eats even more so. But the really important thing to keep in mind about Siargao is that this place is all about island life at it's purest and chillest; I don't even know if that last one is a word or not.

This is an island where time moves without an ounce of haste. Don't expect five star service or for people to move at a pace typically expected of urban hotels. The island really has a chill vibe, and it makes visitors recalibrate their concept of time or promptness. Heck, don't even expect your dinner to be set on time; something that may have bothered our hosts from Toyota that pride themselves in timeliness. 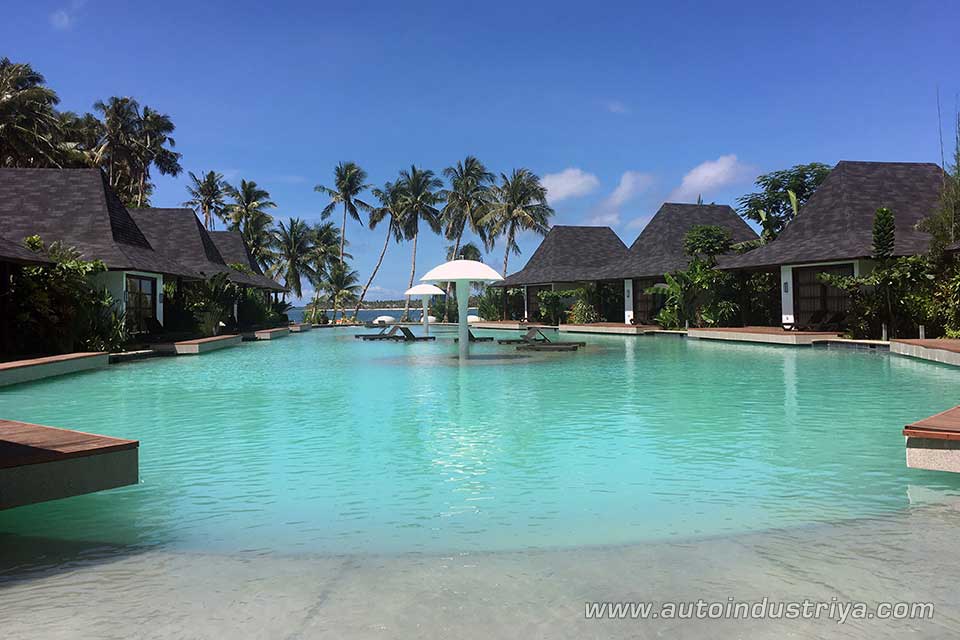 But while some may see that as a hindrance, if you're here, it's something to be embraced, and it's a big part of what you can enjoy about the island. Here, you can grab a book and read on a bench, order a margarita by the pool, book a fishing trip, so on and so forth. And yeah, you can surf too. More importantly you can disconnect from that busy life; you won't be bothered by emails either; the 3G doesn't work very well anyway.

These reasons -and more- are what make up this fantastically charming place, and why we'll probably go back someday. Hopefully soon.

Coffee and good conversation with the Corolla Altis

A coffee crawl with TMP and the Toyota Corolla Altis