Answers to your FAQs on the weekly DPWH road maintenance projects

MMDA, DPWH agree to finish all reblocking on EDSA by Holy Week 2014

A Quick Guide to Engine Carbon Deposits: The Cholesterol to your Car's Heart

DPWH traffic advisory regarding weekly reblocking and the Shell Eco-marathon

After the moratorium of road repairs was lifted after the holidays, the first reblocking effort of 2014 turned the usual 15-minute drive into a 1.5-hour ordeal for motorists.

Before you go ballistic and rupture a vein or simply swear-off travelling forever, we spoke to Engineer Reynaldo Rosario, the Chief of the Maintenance Division of Department of Public Works and Highways (DPWH) - National Capital Region (NCR) and compiled AutoIndustriya.com's comprehensive guide to the DPWH Reblocking program.

The nine district offices of the DPWH-NCR started planning two years ago. Their main objective was to reblock damaged sections and prevent further deterioration at the start of 2013.

The Metropolitan Manila Development Authority (MMDA) lifted the moratorium on road repairs in February of 2013, giving the DPWH the green light to start reblocking. They submitted 375 project locations to the MMDA but were only cleared to work on 178 because the MMDA had to take into consideration public events like fun runs and even mall-wide sales. As harshly as we think of the MMDA sometimes, myself included, they do have our best interests in mind at all times.

Believe it or not, the weekly reblocking schedule has been going on since February last year and only let up last November when the MMDA put a temporary ban on road works in anticipation of the Christmas traffic. So this whole reblocking-every-weekend-of-2014 didn't come from deep left-field and therefore shouldn't come as a mega-volt shock to everyone.

Reblocking re-started February this year, after the MMDA's moratorium ended. It is for the remaining 197 of 375 project locations from last year plus new defects detected this year.

If you're still recovering from February 1 traffic trauma, this little piece of information may provide a little relief - the DPWH actually submitted 10 projects location for that weekend to the MMDA but were only cleared to work on 5. So in essence, it really could have been much worse.

Despite the MMDA's line-up of 13 road and mass transport projects stretching until 2017, the DPWH categorized the reblockings as mandatory and cannot be contingent to other schedules.

Roads are classified 'priority' if the concrete is shattered. The DPWH district office with jurisdiction over the area sends a request to the MMDA a few days before the planned reblocking for clearance.

The lead time for clearance has to be close to the reblocking date because the MMDA needs to consider public events near the area that weekend. Fiestas and other fixed-date events are easy but fun runs, parades and corporate events make it a delicate balancing act for both agencies.

Asphalt-laying may be a quick-fix you say? Yes it is but according to the DPWH, it is a short-fix as well and simply adds maintenance cost without the long-term benefits that’s why it's been scrapped.

What is done during Reblocking?

When a road is tagged for reblocking, the DPWH measures its length and depth then digs it up, top to bottom. The depth varies depending on the thickness of the concrete and each section is different from the next.

For reinforcement, steel bars are laid and connected to the 'good' sections before concrete and gravel are poured in and left to cure.

The typical curing time for concrete is 7, 14 and 28 days depending on the mixture for it to attain optimal strength. Since EDSA is such a major artery, DPWH engineers came up with a 3-day-to-cure (Friday-night-to-Monday-5 AM) mixture to secure a weekends-only schedule. According to Engineer Rosario, this is absolutely the bare minimum time frame possible to achieve the required strength. Any lesser will result in a shorter lifespan/service life and will be prone to premature cracking.

If you're wondering what the 'required strength' is, it's 13.5 tons per axle capacity on EDSA and other major roads in the NCR.

After reblocking, the section is supposed to last a minimum of five years without maintenance.

What causes the damage?

Well aside from the average wear-and-tear, the minimum 200,000 per day traffic that goes through EDSA alone will cause scaling, crocodile cracks, transverse splits and longitudinal cracks eventually. Not to mention the unimaginable and immediate damage caused by overloaded heavy-duty trucks and trailers.

The DPWH has thirteen, round-the-clock, mobile 'Anti-Overloading' stations all over Metro Manila monitoring trucks and trailers exceeding the limit. Violators are ticketed then redirected to established truck routes, which are also being upgraded to be able to cope with the weight of today's cargo.

Preventive maintenance is practiced on sections with very small cracks. A sealant or concrete epoxy is applied to cracks that aren't more than half of the concrete's thickness. 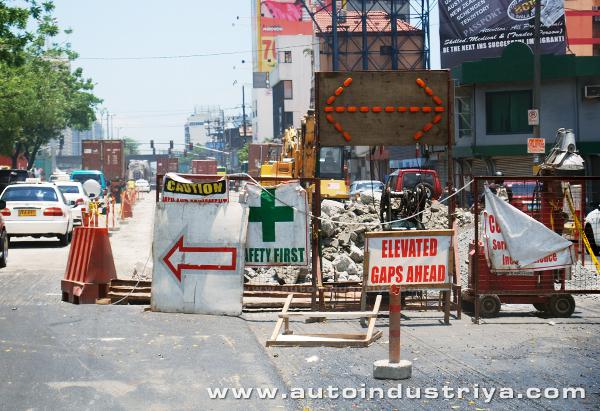 Reblocking to expect in 2014

Local governments of areas where there's reblocking are advised to ensure that motorists can and will receive all types of assistance.

A weekly bulletin also comes out on newspapers indicating alternative routes for motorists to take.

DPWH asks for patience and understanding

The DPWH has become the fall-agency of worsening weekend traffic. They're pinned between a damned-if-you-fix, damned-if-you-don't-fix scenario. Don't fix it and people say they're useless, fix it and they're traffic-mongers.

Regardless of the public's adverse reaction, making sure our roads provide an acceptable of level of service is the DPWH's ultimate goal. They don't need the praise, accolade or even thank you's.

It is their job and they know it. All they ask for is patience from the motorists and the commuting public because as the saying goes, 'this is for our own good.'

What Women (Really) Want in Cars

Men are from Mars and women are from Venus, or so it's been said; so how come we're expected to drive the same type of car?

If budget permits, here's our very own honor roll of cars for your child once he/she completes the graduation march.

MMDA, DPWH agree to finish all reblocking on EDSA by Holy Week 2014

A Quick Guide to Engine Carbon Deposits: The Cholesterol to your Car's Heart

DPWH traffic advisory regarding weekly reblocking and the Shell Eco-marathon

How to prepare your car for MVIC