Made in RP: What cars are assembled in the Philippines?

A rundown of the locally assembled cars in the Philippines today

Is Hyundai going to assemble the Eon in the Philippines?

It's nice to reminiscence about the past.

One could say that we had quite the resume with assembling cars, be it completely knocked down or semi-knocked down units. We made muscle cars, luxury sedans and, perhaps most importantly, cars for the common folk.

A lot of automakers have abandoned the idea of making cars here in favor of building them in Thailand, or in other neighboring ASEAN countries. However we still have quite a number of cars that we can say have been put together by our workforce.

So what's being made here now? Here's a quick rundown.

From building Crowns, Lite-Aces, Corollas, and many more, Toyota Motor Philippines is down to two locally-made cars. In case you haven't guessed it, these are the Innova and the Vios, two of the top-ten best-sellers in the country.

Both these cars are assembled from the ground up and the two have been made here since their respective first-generation models. The first Vios rolled off the Santa Rosa, Laguna facility in late 2002. A couple of years later, it was time for the second generation Vios to hit the market. Despite being a rebadged Belta (as it was called in the Japan at the time), TMP soldiered on building the B-segment sedan locally, up until 2013 when the current-generation Vios began production. The next Vios will also be locally assembled.

The first, locally-made Innova succeeded the Revo by late 2004. Customer deliveries began sometime in 2005 and it would be another 11 years before the plant would be re-tooled for the second-generation model in 2016. In some ways, the Innova continues the tradition of building full-frame, multi-purpose vehicles which began with the Tamaraw.

With the Adventure being sent out to pasture and the L300 well into retirement, MMPC is down to two Philippine-made models. These are the Mirage hatchback and the four-door Mirage G4.

These two cars were sourced from Thailand up until last year and MMPC made the move with a bang. It was the hatch first, back in February 2017, followed by the G4 a few weeks after. They presented the Mirage G4 to none other than the President of the Philippines. With a new stamping plant, it simply spells even more local content for the two cars, and MMPC.

Honda may be a relative youngster when it comes to building cars here but one could say HCPI currently has one the longest-running nameplates that's still being made locally.

Since 1996, the company's Santa Rosa plant has been rolling out the Honda City since its first generation (third if you include the ones from Japan). It began with the 1300cc LXI and EXi variants, followed by the 1.5-liter VTI. Soon after, the Type Z followed and, a few years later, the short-nosed, i-DSi and i-VTEC models were made in the plant. Come 2009, the longer-bodied models began production here and, five years later, we arrive at the current model. This generation of City has been made from the ground up, stamping and all, since 2014.

That means over 20 years of building the B-segment sedan in the country, making us one of the major assembly lines for the City, along with Thailand and India 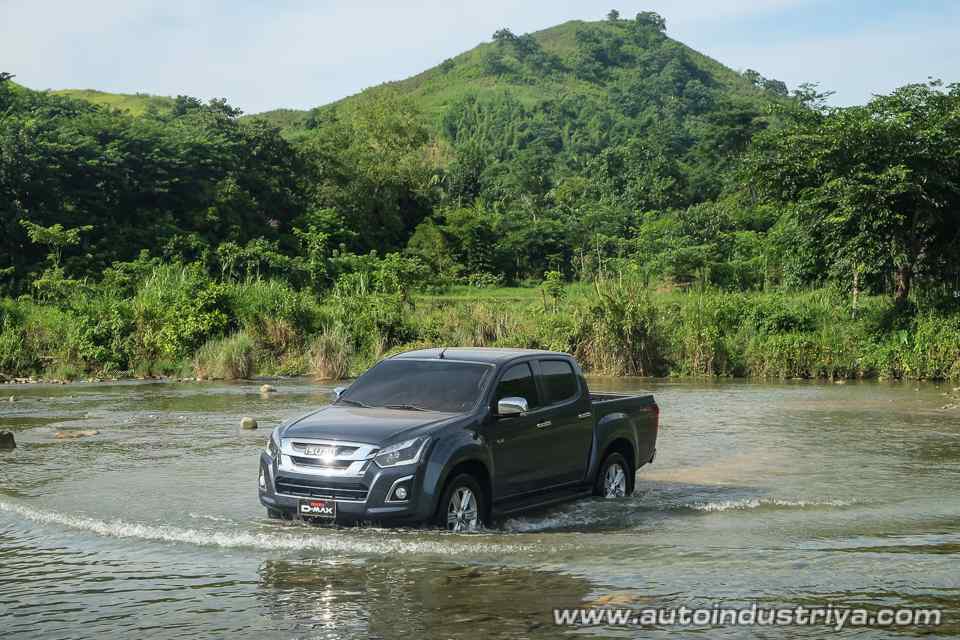 Isuzu in the Philippines has had a long line of assembling pickups in the country. It started with the KB Series, followed by the TF, which eventually spawned the Fuego. That continues to this day with the current generation D-Max. Initially sourced from Thailand, the D-Max you see in dealerships today came from Santa Rosa, Laguna.

Unlike the Hondas and the Toyotas, The D-Max gets its panels from outside the country. Once the parts arrive, the local assembly line fits and welds them all together. Once the paint and body is complete, it is then mated to the chassis through a process called 'marriage'. Mind you, the D-Max is still a completely knocked-down unit here as the Santa Rosa plant completes the kit that was sent to them. It's been that way since 2004, when the first-generation D-Max rolled out of the plant all those years ago.

It's not just the D-Max they build here either. They assemble the heavy-duty trucks here too such as the N-Series and F-Series. Let's not forget that Isuzu is also one of the key players in the PUV modernization program as well, with the help of Almazora, Centro and Santarosa.

Nissan used to build a lot of cars here, but these days, it's down to one car. As it stands, NPI's lone Philippine-made car is the Almera. Like most of the cars here, it is made in Santa Rosa and has been that way since late 2012. The first batches of the Almera became available to customers by early 2013, and has been a solid seller for Nissan since.

Locally, Almeras are assembled from the ground up. Nissan even has a stamping press here, meaning the car starts out as a blank sheet of metal, which is then welded and put together by the assembly line. As far as local content goes, the Almera boasts a lot of it.

Foton is one of the latest automakers to set up shop in the country. Unlike most of the vehicles made in the list, Foton doesn't make their cars in Santa Rosa, Laguna. In fact, they're up North, in Clark, Pampanga to be exact.

Here, Foton assembles seven of their vehicles. These include the Toplander SUV, Thunder pickup, and Traveller van to name a few. These are made from completely knocked-down (CKD) kits, although there is no press at the time of writing. The vehicles are then stitched together by the workers of the Clark line. On top of that, Foton is aiming to export the Philippine-made models to Laos and Taiwan in the future.

The newest entry in manufacturers who build cars here is Hyundai. Dubbed the Hyundai Assembly Center (HAC), it is located at, like most manufacturing hubs, Santa Rosa, Laguna. Hyundai Asia Resources Inc. (HARI) opened the facility just a little over a year ago.

Locally assembled Hyundai models consist of the Eon and the H350 van. The small hatchback and full-sized van undergo final assembly here. Prior to that, the Eon was imported from India, but the H350 has been part of the local assembly line since its launch.

However, all that's about to change as HARI mentioned that their new CKD line will commence production soon. HARI is targeting the end of the year to start making the EON and H350 as completely knocked-down units.

How does the entry-level Vios, Santana and Dzire fare against the competition and each other?

Is Hyundai going to assemble the Eon in the Philippines?

This is what next Volkswagen Multivan/Transporter will look like

It won't be long before Volkswagen debuts the all-new Transporter

Curious how the Toyota Land Cruiser 80 prototypes looked like? Here they are