In case you never surrendered your PREMID or KAPSCH electronic E-PASS tag, it's still not the time to start looking for it. As daily South commuters know, E-PASS is no longer valid/usable/supported/recognized on all the three expressways that comprise the South Tollway; Skyway Stage 1 & 2, SLEx/TR4 and STAR. With the transition period over, AutoSweep, the tag-less RFID sticker has exclusively taken over what E-PASS used to do since Skyway Stage 1 opened in 1999. 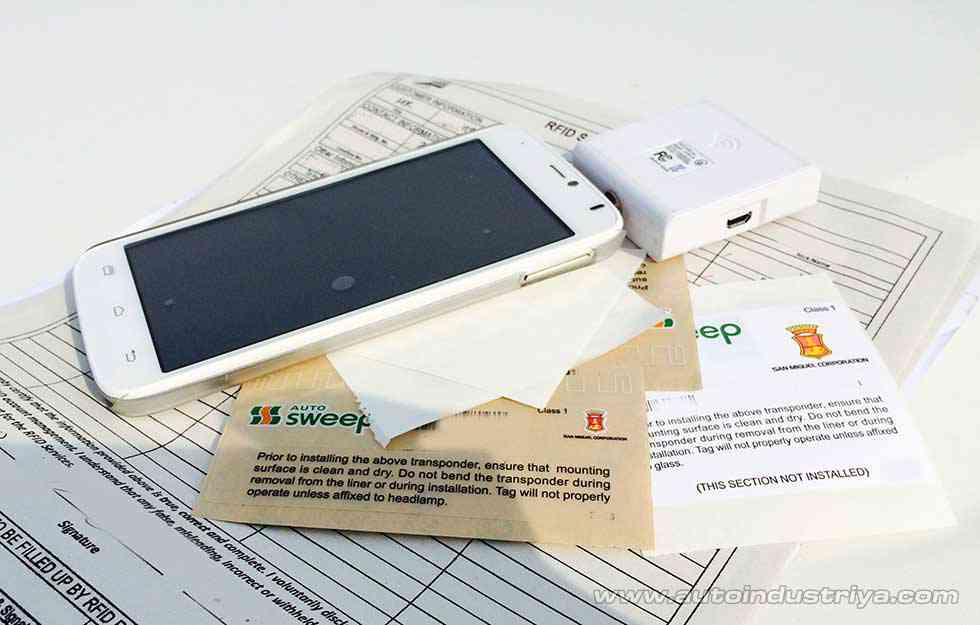 AutoSweep, according to San Miguel, was the next step forward from E-PASS. Instead of forking out a thousand Pesos deposit for the ETC tag, AutoSweep was given away free for the first 150,000 vehicle owners. The plan was to get former E-PASS users to switch to AutoSweep for free and with a far reasonable price of 200.00 Pesos per sticker for every vehicle applicant, beyond vehicle no. 151,000. Migrating all of the current 250,000 E-PASS users to RFID AutoSweep should be sweet and simple.

San Miguel's preference to AutoSweep was that it didn't need an electronic tag powered by batteries to store data as the RFID sticker holds only minimum data. With RFID stickers, the hit on the motorist's wallet is also minimized as more car stickers can be linked to one pay account. Coupled with ambitions to build the country's largest tollway network, San Miguel can save on a lot of RROW acquisition costs as it hopes to build more compact toll plazas with less cash lane toll gates.

E-PASS on the other hand was hailed in 1999 as the marriage of the 'brick and mortar' highway with the digital one. Taking a page from space starved Japan and Singapore, ETC or electronic toll collection was the convenient alternative to reducing toll paying queues while also reducing precious urban real estate for city toll plazas. As a flagship BOT of the Ramos administration, the Skyway and its introduction of E-PASS encouraged the TRB, [toll regulatory board] to require future BOT tollway franchises to have ETC lanes. E-PASS by Capstone technologies uses the so-called DSRC [distance short range communication] system, the microwave frequency system mandated by the EU to be the standard for all European ETC's.

By design, ETC by DSRC tags need to store electronic data which are most appropriate for closed system tolling – the system currently in use on the South Tollways and the NLEx portion from Bocaue to Sta. Inez, which now also includes the SCTEx and SFEx. The closed system tolls are charged on the distance covered from entry to exit. Being of such length and of numerous entries/exits, the closed system charges varies a great deal. As a tag, the DSRC system lent itself to transferability from one car to another.

Contrast that RFID stickers are non-transferable and exclusive to a vehicle. RFID or radio frequency identification was designed for 'Open' system tolling i.e. regardless of the entry or exit, only one toll fee is charged. This is commonly applied for many toll bridges in the USA and short, limited exit/entry stretches of tollways in Taiwan, Turkey and some US states. Using the open system locally is the NLEx segment from Bocaue in the north to Balintawak/Mindanao/Karuhatan exits in Manila. Same toll fee is applied, whichever entry or exit taken, including the exits in between like Valenzuela, Meycauayan and Marilao.

For a good 16 years, E-PASS became the standard for ease of travel. Whenever one's vehicle approached the queue-less toll gate exit, one didn't need to stop. Proceed at 20km/h and the barrier snaps to attention. Loading was via convenience store POS, other pay center outlets and internet pay options like BPI expressonline.

When First Holdings of the Lopez group opened the re-born NLEx in 2005, it already incorporated the EC-Tag Thales DSRC tag, exactly what one uses in EU tollways as provided by its partner, Egis SA of France. First Holdings pioneered the next step forward for ETC by validating more than one kind of ETC. NLEx also had pre-paid toll cards similar to an older ETC system used in Malaysia and later introduced by the Coastal Expressway as E-Tap. The dream of Egis at that time was to introduce interoperability i.e. you can use your EC-Tag in the Skyway as easily as charging your NLEx toll to your Skyway E-PASS.

In practice, EC-Tag was never found to be as convenient at E-PASS because it was not linked to be reloaded by BPI expressonline and TMC toll management corp. the operator of the NLEx chose to program ETC tag readers to only open the toll barrier if the vehicle comes to a full stop in front of it. So no such thing as 'sailing through' the barriers like the way they do in the South. EC-Tag though introduced 'top-up' lanes where EC-Tag holders can reload their tags with cash by going through select toll lanes where both cash and ETC tags are allowed. South tollways has such 'mixed' or cash/E-PASS lanes, but no 'top-up' feature. E-PASS had its snags too when a major software update was needed when balance reconciliation was not being updated quickly. The removal of the Nichols and Calamba entry toll barrier exposed the system to collection leakages, which was rectified in 2010 as new barriers were built.

When San Miguel decided to introduce RFID stickers to replace E-PASS on the South Tollways in 2015, it chose Vendeka, a tollway builder and O&M provider in Turkey. It was to prove to be a world first because RFID was not known to work with 100% efficiency in closed system tolling. Prior to Vendeka, EasyTrip successfully introduced EasyDrive RFID stickers to CAVITEx but CAVITEx practices open tolling since it has a limited number of exit/entry options. With E-PASS's exit, AutoSweep is bedeviled with failed entry identification causing delayed collection balance reconciliation. Though isolated, San Miguel has yet to hit upon the right software repair or upgrade that will bring all AutoSweep transactions to 100% positive ID and instant debit. Moreover, South commuters now suffer the added agony of long paying queues as San Miguel has reduced mixed lanes on the South Tollway, hoping to cajole motorists to widen take up of RFID ETC.

It is a problem desperate for a solution. ETC closed system tolling by RFID has to depend on back up systems like the CCTV identification of toll booth entry and exit. The added costs of triggering back-up ETC defeats the purpose of having one ETC provider and introduce higher operating costs due to frequent intervention by the back up collection system. Ever conscious of SMC stockholders, RSA is strictly monitoring these extra costs. We suppose it is a stumbling block to the introduction of AutoSweep on San Miguel's TPLEx in the North.

Things are not much better in the North. After a brief duration after acquiring MNTC from First Holdings, MPT [Metro Pacific Tollways] ditched Egis SA and decided to consolidate software systems providers with Indra SA, MERALCO's chosen provider. Unfortunately Indra has no tollway experience or franchise in its portfolio. For three years now, the post Egis ETC system of SFEx, NLEx and lately SCTEx suffers from frequent slow or misreading at toll gates. This has been a big headache for Northern Luzon's largest bus fleet [Victory Liner, Hernandez group, et al] and commuters. Despite costly and repeated purchases by MNTC of readers and other computer paraphernalia, Indra's software has not been able to match the efficiency of the former Egis system. Indra is still the main headache of EasyTrip, NLEx's ETC company, which is absorbing added reconciliation back-room costs. NLEx is embarking on full interoperability by introducing Beep card and MasterCard compatibility, along with NLEx's own RFID sticker, but it still has to solve spasms of slow reading of EasyTrip tags and toll card system used by PUV's. Not surprisingly, on going trials for the other modes of ETC show sub-par reliability.

When will it ever end?

With all this, one is tempted to taunt 'if it ain't broke, don't fix it' or 'leave well enough alone'. This is going to be a problem in the near future as more exits are commissioned for the SouthTollways as it expands, via CALAx, Skyway Stage 3 and NAIAx and in the North, through the NLEx-metro link connector. Considering all the time wasted and money spent, would it be churlish to suggest a return of E-PASS and Egis? Or challenge the San Miguel RFID supplier and Indra to sub-contract a proven tollway technology provider. Indeed, why not? Meantime, the toll paying queues keep building up and left unsolved, it can only get worse as more tollways come on stream.

What is the price of progress? 'Build, build, build' might just lead us into more debt. The Inside Man explains

The the vehicle excise tax looming, The Inside Man voices his opposition, and his proposals, to HB 4774