Can't we make public transport commuting as easy and convenient as abroad?

Duterte warns TRB: Another RFID mess and you're all out

The mentality behind the MRT fiasco

We experience how Toyota Safety Sense works, and it is brilliant

Many of us private car commuters have travelled abroad and have enjoyed commuting by public transport, especially in countries with comfortable weather. All we needed was a good travel guide and easy-to-understand maps. For the wired, their needs are readily served by easy to use smartphone apps. Back home, navigating the public transport system is not that easy as the only way to get around is to ask people who commute via a particular commuter corridor. But, for the smartphone crowd, they've now got Sakay.ph, the first app to ever cover the Jeepney circuit for Metro Manila.

To little, too late to catch up

Even with several light rail transit systems PPP's just about to start building, with more in the pipeline, there is no denying that the growth in commuter traffic just about swamps any delayed increase in commuter capacity, considering that current rail systems have been saturated long ago. Upgrades for the current systems and the new "Beep" card are a big help, but is far from enough. For the far future, we are still light years away in implementing the multi-gazillion US dollar JICA "dream" transport plan for the Metro.

In "Can the world's worst traffic problem be solved?", an excellent piece of research by Greg Lindsay, government has long correctly identified the problems, but like most deep seated and politically sensitive 'entitlements', change will be more than just time- and fund-consuming. Mr. Lindsay's research quotes DOTC as focusing on intermediate solutions like revamping the antiquated franchised routes, replacing the high pollution fossil-fueled fleet, introducing and/or adapting novel transport systems like P2P busses, Uber and Grabcar, and introduction and expansion of BRT.

The recent introduction of P2P express buses aims to shift more bus trips to point-to-point limited stops express rather than stop-every-300m-local bus/jeepney style. Those who remember the Metro Manila Transit Corp.'s (MMTC) air conditioned Love Bus from the 70s will find the P2P concept similar. In both instances, the air con bus with express routes did take in a lot of single occupancy private car commuters who preferred to take the bus and leave their cars in the garage. In reality, proper bus route and dispatch management is not rocket science, but for bus systems to work, there should be overall coordination of all transport elements instead of the current piecemeal and locality dependent approach. The efficiency of the MMTC at inception modeled on international practice is proof of this. Meantime, the revamp of the percentage based "boundary" fare commission structure of transport workers compensation into regular work hours, a recently passed law, still has to get somewhere in application.

In the course of figuring out the root cause of local transport problems, research discovered that for Metro Manila alone, there are close to a thousand LTFRB franchised Jeepney and bus routes. Many of these routes overlap each other and many traverse distances that, in some instances, is six times the length of a hypothetical direct point A-to-point B route. This is even before we consider the preponderance of colorum (illegal and unfranchised) jeepney/bus operators and the largely free-for-all tricycles which function like go-anywhere taxis for pygmy commuters, unless one is ready to assume the fetal position.

This convoluted routing of franchised public utility transport routes is mirrored across the country. Many of these franchised routes started as mom-pop or solo unit-entrepreneur jeepneys that serviced their chosen route when population densities grew and townships sprouted, enhanced by paved roads. These enterprising route pioneers then went to the PSC (Public Service Commission) the LTFRB's predecessor, and had their "pioneer" route franchised. With the route now established, other competing jeepney operators later on applied for a franchise to service the route. As population grew and spread its locus of concentration, the established route became unresponsive to the needs of new commuter destinations.

In this case, it is patently obvious that government regulation only came in after the fact, i.e. there was no planned route in the first place, the route being established by practice, without any research and being a fait accompli, it received a "blessing" from the franchising authority. With such a system, franchising of routes were routinely accidental and never determined in a planned, holistic or coordinated manner.

A new from-the-top-down transport route matrix or map is needed and, owing to the judicial rather than administrative/regulatory nature of the LTFRB, consultations with the existing transport stakeholders is bound to be the major snag as Jeepney operators always resist any kind of change from the routine. Perhaps the judicial nature of the LTFRB misled the outgoing administration in packing the agency with regulatory and policy lawyers with little experience or inclination in planning and mapping.

Finding Mass Transit Railways and Light Rail slower and dearer to implement, DOTC has cast its lot for the quicker implementing BRT- Bus Rapid Transit. BRT uses existing right of way and using slightly modified rubber tired buses instead of rail cars. What DOTC has been overlooking for more than 30 years is Inventor Francis Yuseco's PRT-PHILTRAK, the Filipino made predecessor of what is called today as BRT. PHILTRAK's concept is essentially what BRT is today; rubber-tired high capacity buses running on an exclusive track or guideway. PHILTRAK, as envisioned, did not need any high cost foreign debt. PHILTRAK incorporates local assembly of its busses in order to promote the desired local manufacturing content and labor. PHILTRAK, and consequently BRT, in many metropolitan transit systems abroad has been proven to a be a lot cheaper to build, own and operate than any foreign funded rail based urban transport system.

There's even talk of imitating what Xiamen, China did; they ejected their costly rail-based LRT on the elevated tracks, smoothed the tracks over and had electric buses, powered by alternative energy do the passenger hauling. Imagine ejecting the MRT trains from the elevated guideway, to be replaced by rubber tired electric trolley buses? PHILTRAK can go further than this; by paving over the outer PNR's rail right of way from San Fernando, La Union to Legazpi in Albay, the railroad can have PHILTRAK agricultural freight goods road trains travel on the outboard roads. The ubiquitous squatter colonies that line the tracks can now have a chance to turn themselves into skilled labor townships who can supply workers for the railroad and parallel PHILTRAK guideway. With the clamor for intercity and circumferential loop railways for many Visayan and Mindanaoan urban centers, PHILTRAK becomes a viable and cheaper alternative to rail and foreign funded BRT. 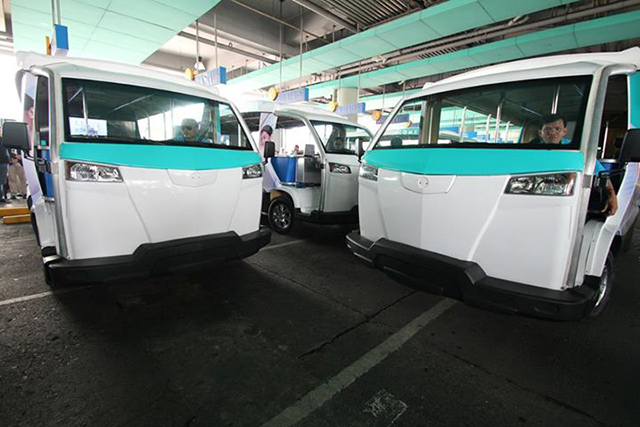 As for refleeting the nation's public transport vehicles to cleaner fuel power, much of the eJeepney program has stalled due to the high cost of lithium-ion batteries for automotive application. Having resorted to cheaper, heavier but low range – long charge cycle lead acid batteries was a non-starter for jeepney operators who are used to 24 hour / 2 driver shift daily operation.

DOT, begin with the Map

For the incoming administration and the "new" and reduced Department of Transportation, what needs to be done has been a work in progress but of all this, what deserves the highest priority and perhaps the lowest cost in investment expense is the wholesale rationalization of all the public transport routes across the country. Locally, we have enough transport planners here who need to sit down with experienced public transport operators of both fleet and single-unit kind and LGU's that recognize the genuine needs of the commuting populace to remap these franchised routes. This is an opportunity to reign in the overcharging endemic in the tricycle sector. Since these tricycles charge like meter-less taxi's, a zoning charge chart should be included in the rate and route restructuring/rationalization of the public transport route map. This route map should become a living organism, subject to monitoring and updating as commuter demand and destinations change over time. This would still be in keeping with the LTFRB's judicial authority to keep what it terms as route mean capacity as fair, convenient and protective of the commuting public.

Brexit: What can possibly go wrong?

How did Britain bungle into Brexit, now still an unravelling disaster of epic proportions?

The new President wants the country to follow his lead using the tried and true practices he used on Davao.

Duterte warns TRB: Another RFID mess and you're all out

The mentality behind the MRT fiasco

We experience how Toyota Safety Sense works, and it is brilliant

All-new Chevrolet Trailblazer to be available in two variants, LT and Premier

Could Lexus offer the LX Offroad outside of Japan in the future?

After debuting in Thailand, the Hilux GR Sport appears to be ready for its Philippine debut

LTO extends validity of vehicles with plates ending in 0

Don't wait until the last minute to renew your vehicle registration

All-new Toyota Rumion is an Ertiga in disguise

Suzuki Ertiga transforms into the Toyota Rumion for South Africa