Flying into Manila International Airport on a clear night, 30 years ago, two glaring [forgive the pun] things will catch your attention; 1. Your Filipino captain, announcing chirpily that you are landing at the Ninoy Aquino International airport. 2. hovering over Quezon city, Makati, Pasay and Paranaque, you'd think, what happened to all the street lights?

1988 was year zero plus one for the moribund and debt-ridden economy, which was more than made up by the unbounded enthusiasm and hope that the 1986 EDSA Revolt ushered. The nation was set to throw a big 18 hour program/holy mass/marathon street party on EDSA come Feb 1988, the secibd year anniversary of the People Power revolt. Party or no party, the reality was that much of the infrastructure was crumbling, crippled by debt defaults and rock bottom international credibility. The Peso was weak and so were exports, except for the exodus of talented professionals seeking opportunities abroad. For those who stayed, the hit Rick Astley songs were apropos [Never gonna give you up, Together forever]. 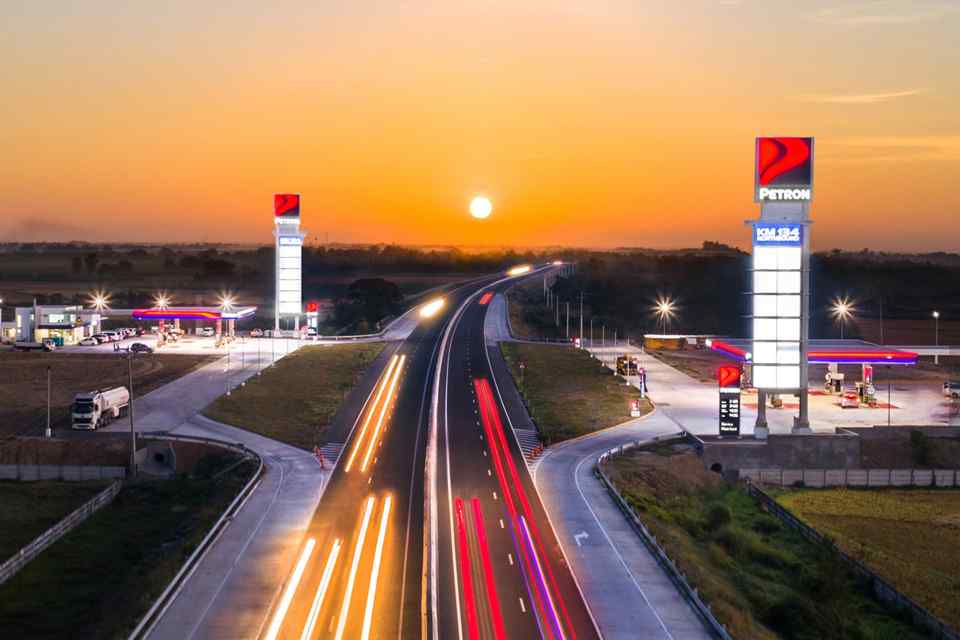 But then the Filipinos are a hardy bunch, getting things done even with a dearth of resources was never impossible. Gasoline [not unleaded] was available from the Big and only three- Shell, Petron and Caltex. The roads were still there. Vacation and fun destinations, near or far, were alive and kicking. For the right price and from a severely curtailed menu, new cars were available. Besides, there was a growing market for used cars and the massive arrival of surplus parts was to keep the nation mobile.

To imagine how it was to live a car enthusiast's motoring life thirty years, ago we share with you the three main elements that characterize motoring life in these islands; The Roads, The Cars and The Destinations

Concrete blocking, asphalt overlay, road markings, signs and guard rails. Road mending and road furniture we take for granted nowadays were few and far between 30 years ago. Road patching before was a quick and crude shovel or two of asphalted aggregate, and if time permitted, a single pass roll over by road roller. Asphalt patching in those days didn't have surgical excision, coring, binder application and compaction before batch mixed asphaltic concrete is applied under high temperature. You can guess the result and lifespan of this kind of road maintenance. 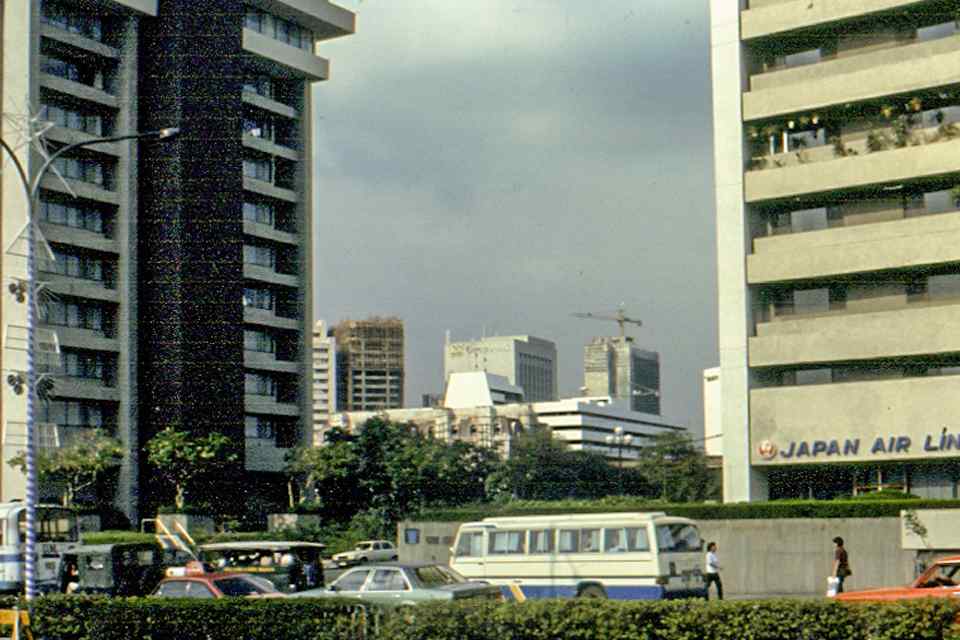 The government's ready excuse then is that because of the former administration's mismanagement, blamed ad nauseum on “massive corruption”, funds for road maintenance had virtually dried up. Add to the mix, the unilateral and comprehensive debt repudiation by the revolutionary government, then one understands why even foreign funds were not forthcoming for even simple road repair, much less road rehab and re-building.

So fanatically against corruption was the government then, that the DPWH minister proudly proclaimed that his department not only made savings but was also graft and corruption free, simply because he refused to spend any money on maintenance and new-build road contracts.The low point to many of us who drive the Makati office commute was when Buendia Ave., a principal road in Ayala's Makati, became a pockmarked lunar surface. Only then that it dawned on us that it was under DPWH jurisdiction, hence, zero allocation for maintenance.

It figures, that if you can't even repair the surface, you can forget about signs and road markings. Indeed a far cry from the trillions invested today where even 3rd class roads in far flung remote municipalities have smooth asphalt overlay, guard rails, chevrons on curves, thermoplastic road markings and edging, cats' eye reflectors and Vienna convention road signs. 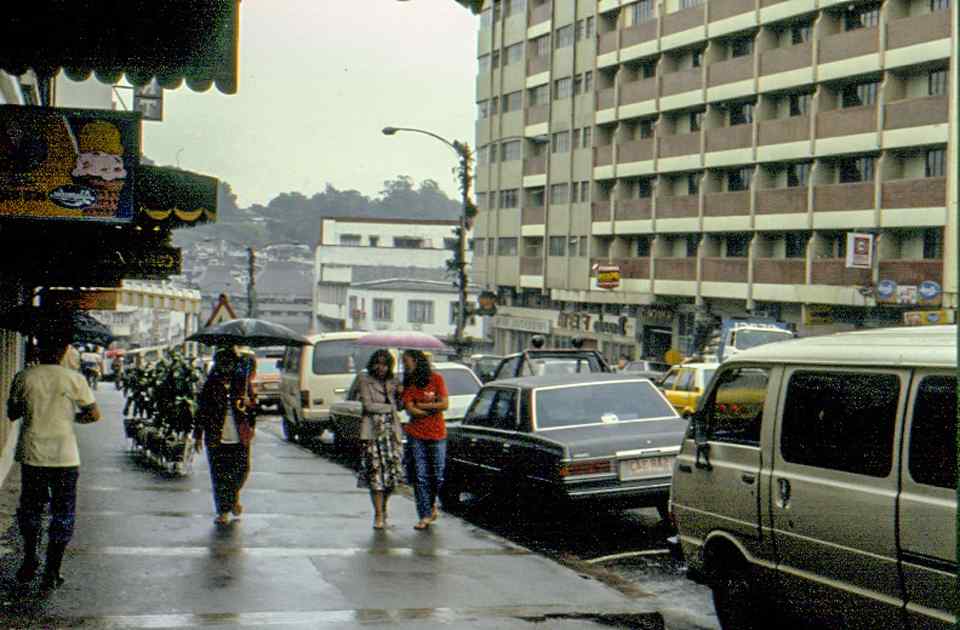 The poor state of road illumination led car owners to install aftermarket driving lamps and fog lamps with H1 halogen bulbs made by Cibie, Marchal, Bosch, Hella and Lucas. Some car owners chose to convert their car's headlamps to H4 halogens and to upgrade their standard 60/55W H4 halogen headlamp bulbs to 100/95 watts. But as in all things local, some of these Rallye inspired auxiliary headlights were not properly focused, leading to glaring dangers to the visibility of oncoming traffic. The government then introduced a law prohibiting the use and installation of auxiliary headlights, except for areas that are fog bound.

If you were caught by the Highway Patrol with mounted auxiliary head lamps, you were penalized with confiscation. Curiously, the lawmakers didn't notice the other lamp fad, the auxiliary red rear fog light. Nowadays, one need not worry about road illumination nor losing your car's extra illumination, as headlights have become “smart” and fog/driving lamps are now incorporated into the standard car's fascia.

Imagine an EDSA without flyovers, U-turn slots, MRT-3, LRT-1, computer coordinated traffic lights, motorsiklo lanes, steel footbridges, wheelchair ramps and yellow lanes, with only the Magallanes interchange, Aurora and Shaw underpass as the major intersections without traffic lights. Put in a broad grassy median, which turn beige during summers, complete with faux brick retaining walls, bouganvilla and patchy lampposts. Monumento in Caloocan City up to the Balintawak cloverleaf section was mainly 3x3 carriageway with a service road. There were also left turn slots and crossings with occasional police or traffic aide presence.

From the Cloverleaf, besides left turn slots to minor roads, you will encounter at-grade intersections with cable hung 4-faced traffic lights; Roosevelt-Munoz, Bansalangin, North-West Ave., Quezon Ave., Timog-East Ave., Kamuning, New York-Cubao, P. Tuazon, Santolan, White Plains Ave., Ortigas Ave., J. Vargas, Pioneer, Buendia, Ayala, Arnaiz-Pasay Rd., Tramo, Taft, Harrison until you reach Roxas Blvd. Also, most parts of EDSA except fronting Phil-Am Life Homes, had the standard 3x3 carriageway with service road. The service road island was in the process of being eliminated to add today's lanes 4 and 5. There wasn't much traffic yet on Ortigas because SM Mega Mall had still to be built and Robinson's Galleria was a “BF” steel skeleton. There was already an MMC [Metro Manila Commission] truck ban in the day, but it was mainly to preserve EDSA's crumbling concrete. Besides, with a shrinking economy, what freight, other than food coming from Cagayan Valley's equally crumbling DRT [Dona Remedios Trinidad Highway]. Otherwise, EDSA and what's left of the expressways were clear for Vmax runs after midnight, inebriated or otherwise.

There were a few spots on EDSA where concrete blocking was being tried out but generally the cracks on the concrete blocks were just sealed with seams of molten tar. The Alabang Zapote road was severely cracked by then and any asphalt mending were merely patch up jobs. Quezon Ave., usually had a well maintained asphalt overlay, to go with its Japanese donated traffic signaling system. C-5 only existed as a dotted line in maps, and in some sections was just a mere service stop by the road to the big factories in the vicinity of Valle Verde. Traffic going to Katipunan on White Plains Ave. was so sparse at night that drag races were held late in the evening. Original plans to make Marcos Highway, paved as dual carriageway up close to Sumulong Highway, as the East Luzon Expressway to Infanta Quezon, had to be shelved with the bankruptcy of the PNCC, the sole franchise holder of all national toll expressways. Just imagine, if Marcos Highway became a limited access expressway, we wouldn't have the crowded development on the Marikina river flood plain, leading to disastrous floods, like typhoon “Ondoy” in the later years. 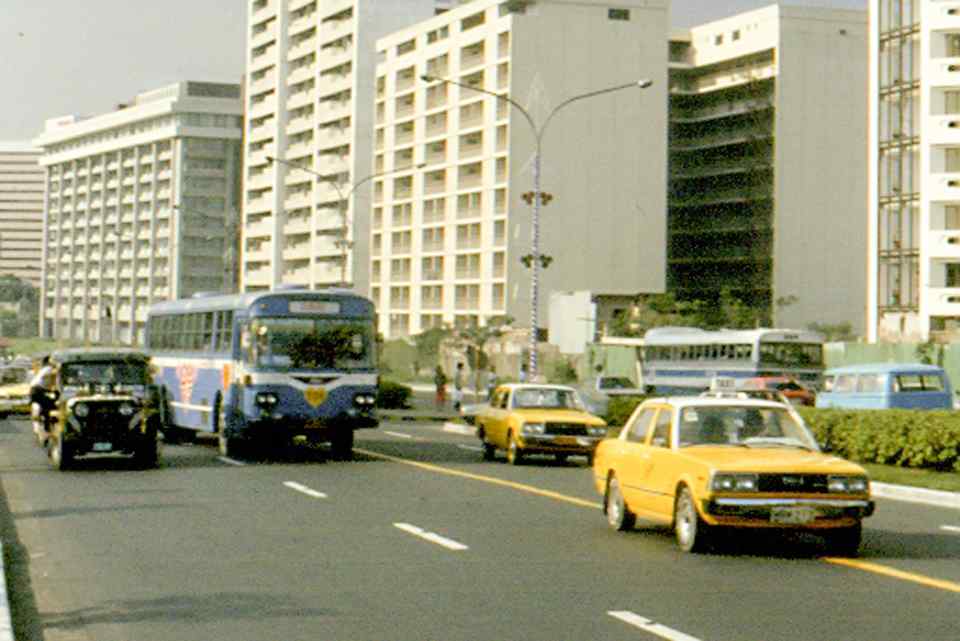 The overwhelming King of the Road in the GMA [Greater Manila Area] were the Jeepneys. By 1988, they were being powered by the second wave of Japanese surplus 4-cylinder diesel engines, mostly Isuzu, replacing aging gasoline engines and ancient Mercedes Benz diesel engines. The State bus monopoly, the MMTC [Metro Manila Transit Corp.] and their sub-franchise private bus consortia for other sectors of the GMA was also failing, idling their many Leyland double deckers, Hino air conditioned “Love Bus” and Superior Coach built buses on Volvo, FIAT-IVECO, Mercedes and Ford chassis. With the bus shortage causing record long commuter queues, the government imported a few Chinese made buses which promptly conked out in a few months. The transport shortage in the GMA, forced the LTFRB to issue temporary franchises to provincial operators plying locally made mini-buses built on surplus Isuzu elf chassis. Colorum buses also abounded leading to the cut-throat piratical competition, overloaded buses and aggressive driving, now endemic among public utility drivers. At that time, only the LRT-1 was operational and it was competing with surface transport PUJs that plied the Monumento Baclaran route.

Today's alphabet soup of expressways [NAIAx, SCTEx, STAR, TPLEx] is a far cry from 30 years ago. One had to content oneself with just the North Luzon Tollway [Balintawak to Sta. Inez] and the South Luzon Tollway [Quirino Ave. to Calamba], both PNCC operated and poorly maintained. There was no road illumination, SOS telephones [no mobile phone network yet too], patrols, rescue services, accredited towing trucks or fuel station forecourts. E-PASS was not even an idea being considered. No LIDAR speed radar too. The PNCC was also subject to numerous lawsuits and TRO's from civic action groups, newly empowered by People Power, seeking to eject the PNCC from charging toll.

It was a see-saw battle and tollway driving turned for the worse one has ever seen. Every time a court order ejects the PNCC security and toll clerks, guard rails and signs were stolen, motorcycles and tricycles drove in, property owners adjacent to the right of way made their own vehicle exits by stealing the fences and livestock were tethered to whatever few signs that were left standing. Even the newish asphalt lane 3 near the median between Balintawak and Maysan was so badly pockmarked that you would risk a bent rim and burst tire if you drove on it. To add insult to injury, the Dau PX shopping lobby, complaining about the loss of business ever since the Sta. Inez toll plaza became the northernmost point of NLEx in 1981, demanded a new exit be built for Dau.

Working through the relatives of Pres. Cory Aquino, the group got their wish in the form a traffic light junction, using phased out Japanese donated traffic signal masts from Quezon Ave. At least they scored a first, an expressway with a traffic signal light. As they say, you get what you pay for. Up to Year 2004, the Balintawak to Sta. Inez toll was pegged at PHP24.50. Also the frequent lurches into insolvency of PEA or Philippine Estate Authority threatened to turn the reclaimed causeway for the projected Coastal Expressway on Manila Bay into an ugly flood prone mound, ruining the bayside view of many sea side villages from Baclaran to Kabihasnan, Paranaque. It would take another 11 years before the Manila Cavite Expressway was to open to traffic.

The Inside Man covered the roads of 1988 in the last installment. Now, he turns his attention to motoring from the era

As the saying goes “be careful with what you wish for. You just might get it.”