Priding itself as the only Audi one-make racing series around the world is this: the Audi R8 LMS Cup. Operated by Audi Customer Racing, the series first premiered in China where the German carmaker has been enjoying successful operations for the past few years.

The series features both professional and gentlemen/amateur drivers with an FIA ‘International C’ competition license or higher required. A unique feature of the series is the level of driver development which allows amateur drivers to virtually ‘compare notes’ for their vehicle set-ups with the professional class drivers. Race telemetry data and in-car camera footage from professional drivers are also shared to allow amateur drivers to fine-tune and sharpen their driving skills.

Recognizing Asia as a vital region of growth in both the automotive business and motorsport, organizers decided to expand its borders across Asia to include South Korea, Malaysia and Macau. They are looking to add more countries to their calendar in the next couple of years. Audi Customer Racing head Rene Koneberg even asked the Philippine media about the recently completed Clark International Speedway, which we replied with a smile as it is embarrassingly nowhere near as well-equipped as tracks like the Zhuhai Circuit, Ordos Circuit and Inje Speedium; not to mention the Sepang and Shanghai F1 tracks.

Koneberg shared that Audi believes there is a lot untapped motorsport talent in Asia, hence the development of the program. They hope to engage in driver exchange programs in the future to possibly field Asian drivers to major endurance events like the Nurburgring 24-hour race or the 24-hours of Le Mans. He also did not discount the possibility of having an all Asian team compete in the prestigious events when asked.

Koneberg relates that while modified, each uses standard equipment for major components like the engine and transmission to make it more cost-effective. The engines have been tested to last for up to two full seasons of racing, while the gearbox can last for up to a season prior to servicing.

They have also regulated tire use to one set of dry slick tires per weekend inclusive of qualifying and the 20-lap sprint race. This is to train the drivers to conserve tires while trying to focus competition on the basis of driver skill rather than equipment. 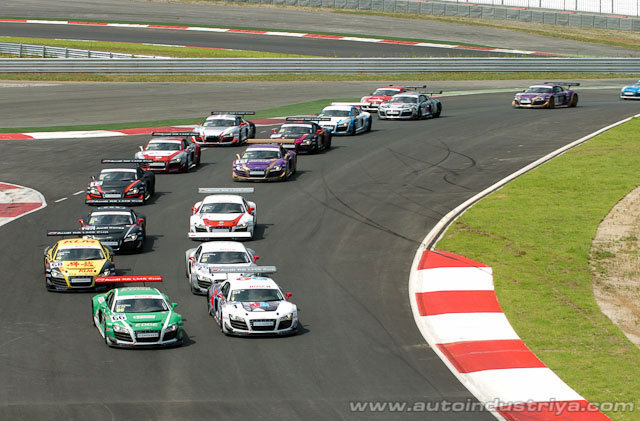 Powering the R8 LMS cars are standard 5.2-liter V10 engines producing 570 PS and torque in excess of 500 Nm. It is mated to the standard R-tronic semi-automatic sequential gearbox with standard clutches. Due to GT3 regulations allowing only rear-wheel drive vehicles, the quattro all-wheel drive system was removed. The competitive one-make series only allows for adjustments to the suspension and aerodynamics to equalize competition making driving skill the ultimate criteria for excellence.

Competing in the one-make series does come at a price. The R8 LMS car costs €340,000 (approximately PhP20M) inclusive of Audi Premium Service for one season, while an annual subscription fee is set at €48,000 (approximately PhP2.8M) covering expenses for logistics and entry fees. Participants can opt to reconfigure their cars for GT3 class competitions provided it does not conflict with the series schedule. 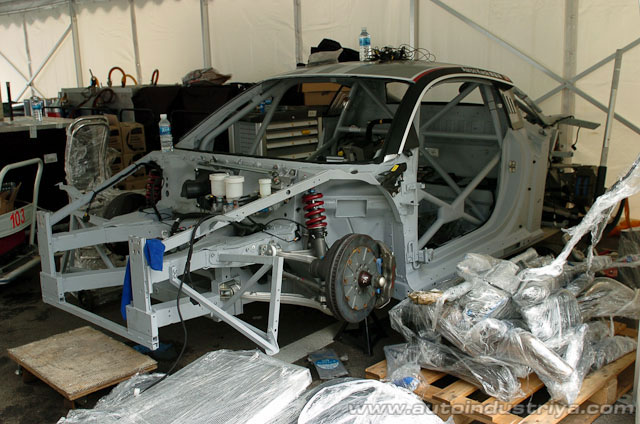 Approximately €2,000,000 of parts travel with the series to ensure that they are readily available in case of accidents or damage. Servicing and maintenance is handled by an Audi-appointed, Zhuhai-based technical management company named Absolute Racing. In case of the uneventful damage to the ‘Audi Space Frame’ chassis and 5.2-liter V10 engines, the car will be sent to Germany.

Despite being de-tuned ‘ultra’ cars, they performed almost as fast as the GT3 race cars competing in the Asian Le Mans series on the same weekend at the Inje Speedium. Just to show how the nearly standard equipped one-make race cars performed, they also outpaced the Porsche Carrera Cup and Ferrari 458 Challenge cars. Despite this, the Audi R8 LMS Cup is not the fastest one-make series yet as this title belongs to its close cousin: the Lamborghini Super Trofeo which runs essentially the same engine with a higher state of tune. 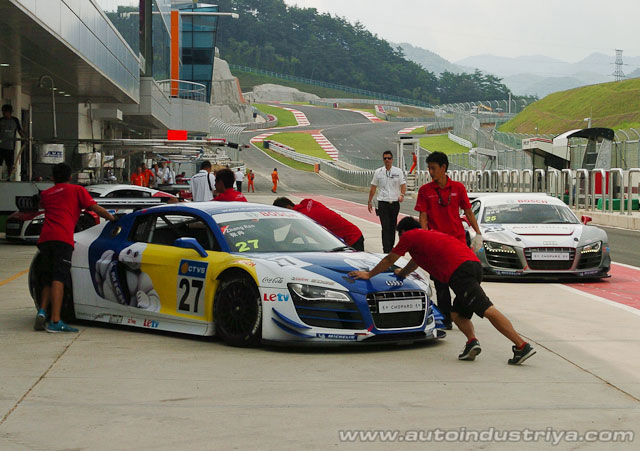 While there is no Filipino team or driver currently competing in the series. It would be worthy of note that half of the 34 Audi race mechanics in charge of servicing the Audi R8 LMS Cup are Filipinos; some of whom were involved in the now defunct Asian Formula 3 series.

As for the Philippines actually fielding a team, the question should be directed to Philippine exclusive distributor PGA Cars which could possibly join fellow Asian distributors.

They say racing improves the breed. Mitsubishi Motors Philippines puts their new Mirage Sedan to the test with a Precision Driving Competition.