We know he's somewhere in the distance, pushing the race car to the limit around the corners and straights of the circuit in the middle of a forest.

Our ears, however, cannot hear the signature sound of a race-spec internal combustion engine revving for all its worth. Instead all we hear are sounds of the air pushing the wings down to the ground, the racing slicks squealing as they reach the limit and the high pitched whine from the electric motor as the 2014 Mitsubishi MiEV Evolution III blasts past the main straight with rally master Hiroshi Masuoka at the controls.

Welcome to Sodegaura Forest Raceway in Chiba, Japan for a day with Mitsubishi's rally master, a pair of special rally cars and one “top secret” model.

Mitsubishi Motors Philippines Corporation brought a select contingent of motoring journalists to Tokyo to sample an all new model that, at their request, be embargoed for almost three months. We probably think you already have a clue about what model that is, but you'll read about it here fully come February 15.

That said, we made our way to Sodegaura Forest Raceway; just under an hour's drive west of Tokyo in Chiba. The circuit itself appears to be something out of Gran Turismo; a short 1.8 kilometer racetrack that, as the name says, is set in a forest.

It's easy to see that the racetrack is quite new; the tarmac is extremely smooth, the paint on the kerbs is fresh and the guardrails haven't seen much in the way of contact. You'll read about our driving impressions of the track and the all new model later on. 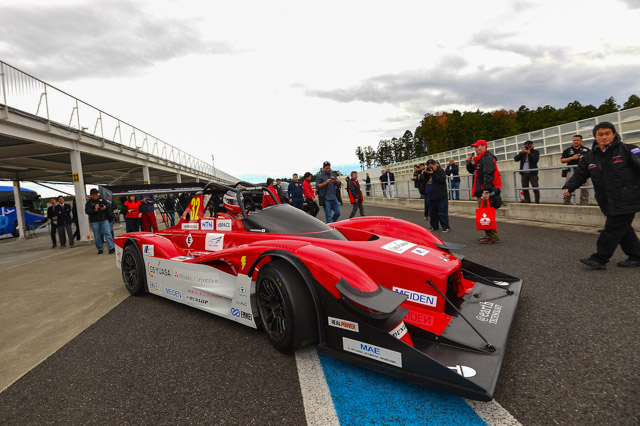 A different kind of Evo III

After the briefing, we immediately spotted one very special car waiting in the pit area: one of two Mitsubishi MiEV Evolution III's that competed at the 2014 edition of the Pikes Peak International Hill Climb; a 19.99 kilometer uphill rally that takes contestants and cars over 156 corners, starting from an altitude of 9,720 feet up to the summit of Pikes Peak at 14,110 feet.

Like the name suggests, the red and winged car we're looking at is the third evolution of Mitsubishi's all-electric entry for Pikes Peak. The car itself is made of advanced materials and an abundance of carbon fiber to keep the weight down, though the MiEV Evolution series proved to be far heavier than their fellow entries with internal combustion engines. Powering the car were three electric motors taken from the iMiEV production car, producing 322 horsepower in 2012 for the MiEV Evolution, 536 horsepower in the Evolution II and then 604 in this Evolution III.

They first entered the event in 2012 with the MiEV Evolution, achieving a time of 10 minutes 30.850 seconds with Hiroshi Masuoka behind the wheel.

In the 2013 PPIHC the Mitsubishi project expanded to two drivers aboard a pair of MiEV Evolution II rally cars with Masuoka and Greg Tracy, a duo that clocked respective runs at 10:21.866 and 10:23.649.

2014's edition of the Pikes Peak hill climb, Mitsubishi shattered all records for electric vehicles at the event. Greg Tracy was able to log a time of 9:08.188, finishing first in the electric modified class. Hiroshi Masuoka was just 3 seconds behind at 9:12.204 and thus second in class. Both drivers were able to best Pikes Peak legend Nobuhiro “Monster” Tajima. More importantly, however, the pair of Mitsubishi MiEV Evolution III race cars finished second and third overall just behind Romain Dumas driving an Unlimited-class gasoline powered racecar.

As proved by the performance of Mitsubishi's charged contenders, it seems the future for EVs is very bright indeed. 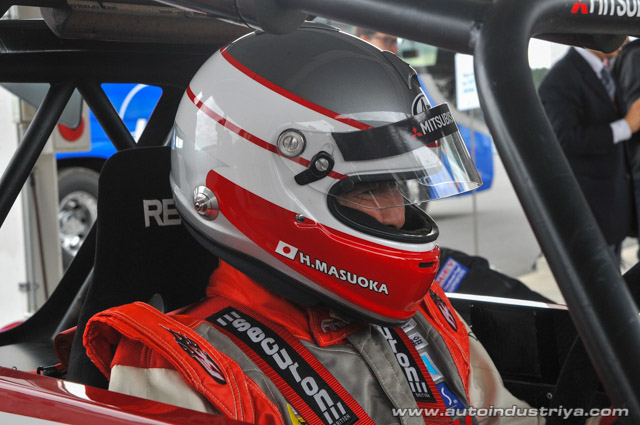 This isn't our first time to meet Hiroshi Masuoka, as he visited the Philippines upon the invitation of Mitsubishi Motors Philippines Corporation in 2010 to launch the variable geometry turbo variants of the Montero Sport. We personally rode with Masuoka as he demonstrated the power and off-road prowess of the Montero Sport GTV at speed at the Clark International Speedway.

To the uninitiated, Masuoka-san is one of the most revered of rally drivers, more specifically rally raids. Unlike “regular” rallies that are run on paved and unpaved roads, rally raids are technically off-road races through the desert, and the 10,000 kilometer Dakar Rally is the most intense and most prestigious of these types of events. Masuoka won it back to back in 2002 and 2003.

He makes his way to the same MiEV Evolution III that he drove at Pikes Peak just a few months prior, all suited up and ready to take it for a spin. The motor doesn't make a sound when he powers it up, instead what we can see are a few lights and screens that indicate that it's ready. He pulls out of the pits aboard the winged EV, and warms up the racing slicks for a few hot laps. 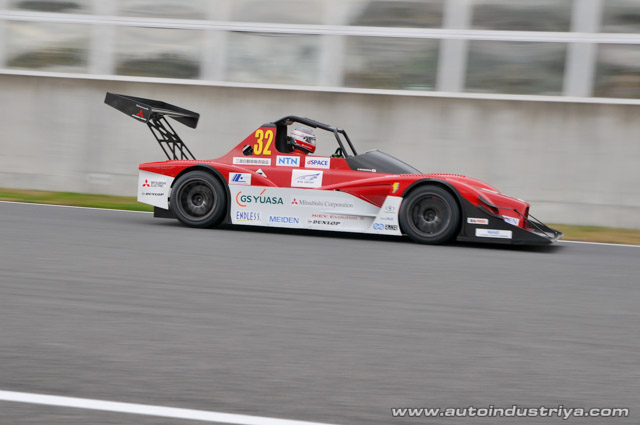 Right at the onset it was easy to see that this demo run is going to be very different. With the tires warm, Masuoka-san nails the throttle. There is no engine note, no high pitched scream from the exhaust as the pistons, valves, and everything else that comes with a high revving gasoline engine. All we can hear as the MiEV Evolution III made its way around the track were the tires screeching, the faint whine from the electric motors and the whoosh generated by the huge carbon fiber canards and wings as the air passed over them.

Make no mistake: the MiEV Evolution III is blindingly quick, and it's got someone who's already a senior citizen (at least by our laws) behind the wheel, pushing it to the limit.

If only our grandfathers can drive like he does. 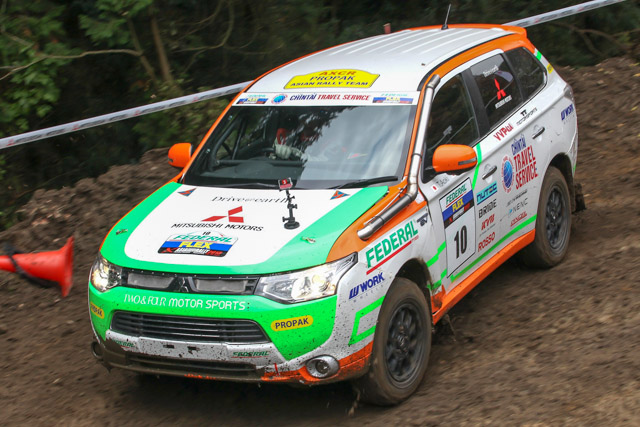 The MiEV Evolution III was only half of what Masuoka would be doing that day, something we realized when we headed out to the off-road park of Sodegaura Forest Raceway where (apart from the vehicles we flew there to test) Mitsubishi had an Outlander PHEV (Plug-in Hybrid Electric Vehicle) cross-country rally car ready and waiting to be flogged around.

Instead of just flat dirt, Mitsubishi Motors had set up a course complete with dips, puddles and ramps that became jump points for the Outlander PHEV rally car, which has been visibly modified for cross-country rallying. Things such as the beefed up and raised suspension, the reinforcements on the undercarriage, the mud tires and the welded snorkel for the internal combustion engine that serves as a generator for the batteries and the electric motors. Like the MiEV, the Outlander PHEV can be charged from a special wall terminal. 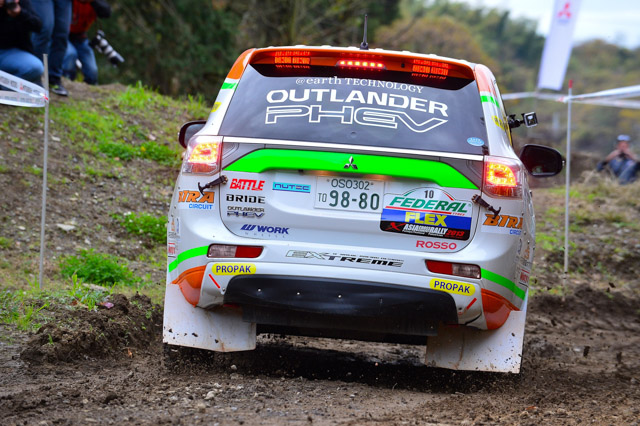 Masuoka made his way to the Outlander PHEV which, according to him, is still “stock” in terms of the powertrain; though we think that there are probably quite a few tricks underneath. Inside, it actually looks quite stock with the dashboard and other bits still present, though they have reinforced the cabin with a full roll cage and fitted a switch panel and other elements common in cross-country rally cars.

Masuoka, right from the get go, floors the throttle and takes off with the Outlander PHEV. Individual motors drive the front and rear wheels, and both are integrated with the S-AWC (Super All Wheel Control); the same technology they use in the Lancer Evolution X.

He jumps the Outlander again and again, kicking it sideways in the dirt when he lands. He finishes his run, hops down from the seat and gets into the “secret” model and nail it around the course, but again you'll read more about that next month. 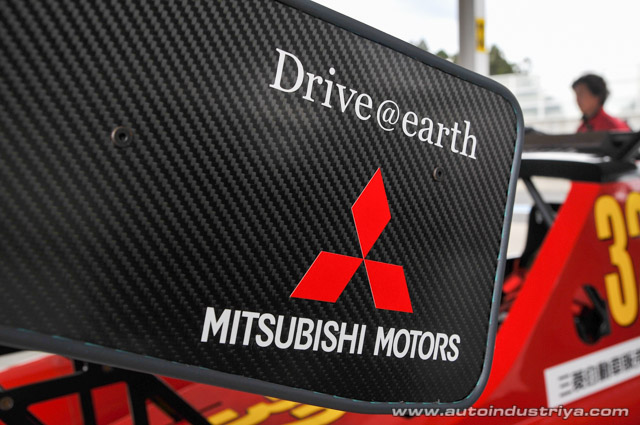 The motorsport of tomorrow, today

In the past couple of years, many racing events and organizations around the world have delved into e-motorsport in their own way. Formula One is one of the most notable as they introduced energy recapture systems in the formula, effectively making F1 a form of hybrid motorsport. The fledgling Formula E series is proving its worth as an all-electric series with exceptional racing and rather spectacular crashes.

More importantly the major players in the automotive industry are getting involved in various degrees and various types of racing. In the case of Mitsubishi, they're banking on their efforts in Pikes Peak and cross-country rallying to prove the technology of racing on 'E'. There are even rumors that the supposed successor in the legendary Lancer Evolution series will be a hybrid with the electric motor replacing the horsepower added by the turbo, but those are still unconfirmed rumors.

There is one thing missing from electric motorsport: the noise.

Seeing a supremely fast electric race car doing a full-throttle drive-by on a circuit or a rally course is indeed a spectacle, but the noise of an equally fast gasoline-powered car makes it an experience. That's just my take, but I'm sure many of you would agree. 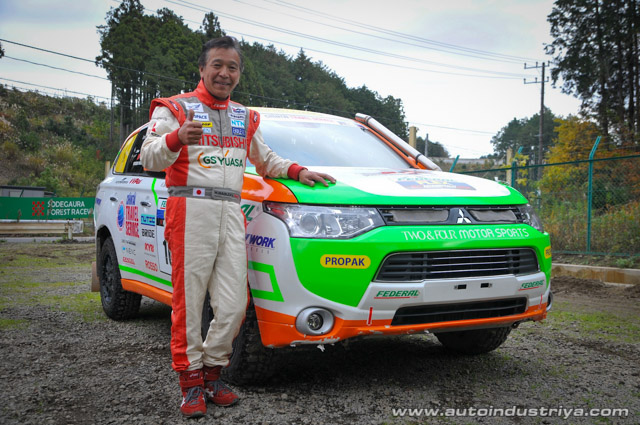 Nevertheless, Mitsubishi is proving something very important. Many have been speculating that at the rate we're burning the world's oil reserves, motorsport will eventually be extinct. With the MiEV Evolution III and the Outlander PHEV, Mitsubishi respectfully disagrees.

Sure the racecars of tomorrow will probably be very different from the ones we've grown accustomed to, but the pursuit to be the fastest will always be there.
-

New all-electric championship promises plenty of racing and uses social media to give your driver a boost.