By now you've heard of what has easily become the most anticipated motorsport event in well over a decade: the Toyota Vios One-Make Race, otherwise known as the Toyota Vios Cup.

As part of the run up to the exhibition race that will take place on October 12 at the Clark International Speedway, Toyota Motor Philippines Corporation gave us a chance to test the cars to be used in the race and, more importantly, see what their latest baby in racing form can truly do on the track. 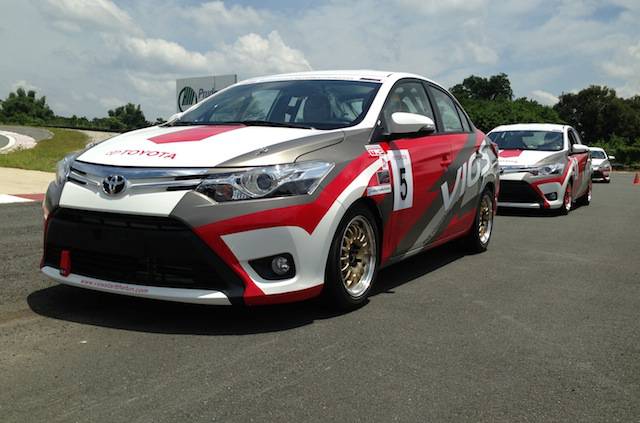 We first got wind of the Toyota Vios Cup (then still referred to as the One-Make Race, or OMR) back in April and already we were excited. To be honest the guys over at TMPC weren't too thrilled that we came out with the story so early, as the Vios Cup will be a regional effort as well, with many of the Toyota operations in ASEAN initiating their own Vios OMR series as well.

This isn't the first time that Toyota Philippines was involved in racing, as back in the day they initiated the Toyota Corolla Cup and the Formula Toyota series, but didn't do so well in generating enough interest in motorsport. There was also a Toyota Echo Cup, but again, it didn't do so well overall.

What will be very different for this series is that drivers who hold or have held FIA racing licenses will be disallowed, as Toyota Motor Philippines wants the Vios Cup to be a purely grassroots program. No professional drivers allowed.

This all hinges on the reception of the Vios Cup to the public. Have things changed in just over a decade? Can motorsport expand beyond the limited circles and exclusive cliques that it traditionally has revolved around?

We'll still have to wait and see, but now it's time to start the fun and get going in the new Toyota Vios Cup car. 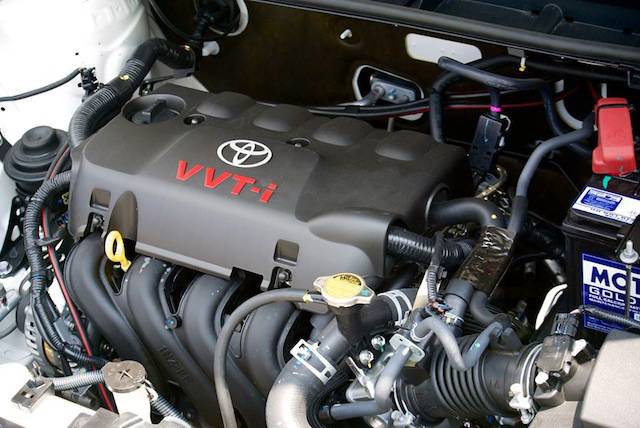 Toyota Motor Philippines Corporation along with the expertise of Toyota Racing Development Asia and the Tuason Racing School have come together to produce the machine you see above: the 2013 Toyota Vios Cup Car.

Basically they took a standard 2013 Toyota Vios 1.5G with the manual transmission and took it to a race car salon. Toyota bolted on a TRD Asia supplied bodykit to make the car more aggressive, and liveried up the machines with their stickers and other decals to give it that go fast look. TRD also supplied an adjustable coil-over suspension system while lightweight aluminum rims were sourced from Rota Wheels, shod with Yokohama tires.

By all indications the engine bays of the 4 cars still looked bone stock, but what is important is what's inside the engine. Toyota has installed parts like a TRD filter, a TRD clutch and a TRD 1.5-way limited slip differential; essential components for any race car. Also, to give it that go-fast feel and to kick up the power a bit is a TRD exhaust system. 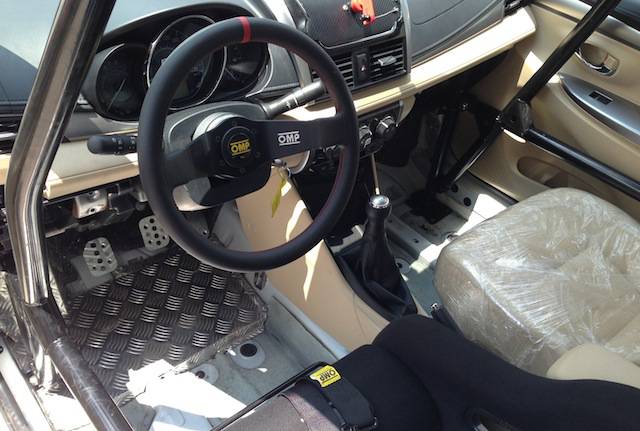 The base Vios 1.5G was stripped to be as bare as possible because, as we all know, weight is the enemy of any performance machine. Gone are all the seats, carpeting, ceiling liners, sound deadening materials and anything else you wouldn't find in any bona fide race car. In its place, Toyota fitted a TRD full roll cage to match the parts from OMP which includes the bucket seat, racing harness, engine kill-switch, fire extinguisher, hood pins, pedals and rear tow hook. Stivo also supplied a front tow strap.

We don't have the actual power figures yet from the dyno, though the stock rated 107 PS (at the flywheel) for the 1.5-liter 1NZ-FE VVT-i engine should be plenty for such a light car.

Just as a disclaimer, the Vios Cup car you see may or may not be specced exactly the same as the car to be sold to customers next year as they are specifically targeting a certain price point; just under PhP 1M, so we're told, but that's all tentative. 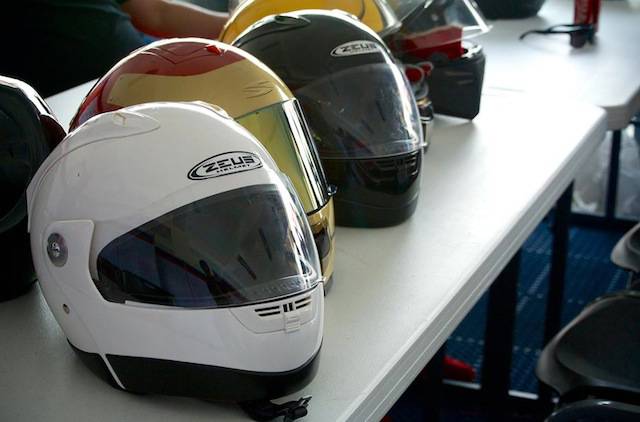 The school of speed

If there's one thing I'm really glad about, it's that Toyota sourced the Tuason Racing School to train the drivers; us included.

Personally, my experience with TRS goes back to 2007 at the now-defunct Subic International Raceway. Today it's different as not only are we with a different manufacturer, but we're on a different racetrack: the almost complete Clark International Speedway.

I can tell you from experience that learning to race at SIR left no margin of error for precise and accurate racing; with one mistake you're in the wall and in tears. Think of it like Monaco, but instead of yachts and gorgeous models in the background, you'll see tankers or the occasional warship with the accompanying amount of U.S. Navy servicemen and their women.

Clark is a much more forgiving albeit still very technical racetrack. When I first got to try the original short course of CIS in 2009 and the full course in 2010, I can't help but notice the differences over Subic. SIR would still hold that special memory of racing beside walls, but in terms of learning to race, Clark is a far more lenient racetrack, given that there are gravel traps positioned around to stop the car you down should you make a mistake. It's also wider and you can generally see your corner exit. 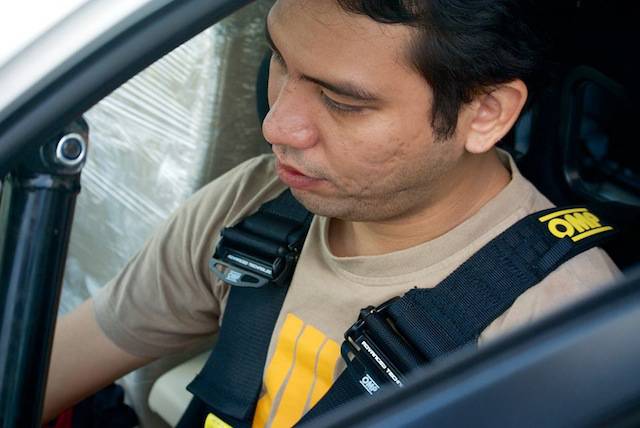 These guys are all heavy hitters and excellent drivers. Unusually we also had Rhian Ramos practicing with us, as she will take part in the upcoming race as well with several other celebrities.
This should be an interesting day. 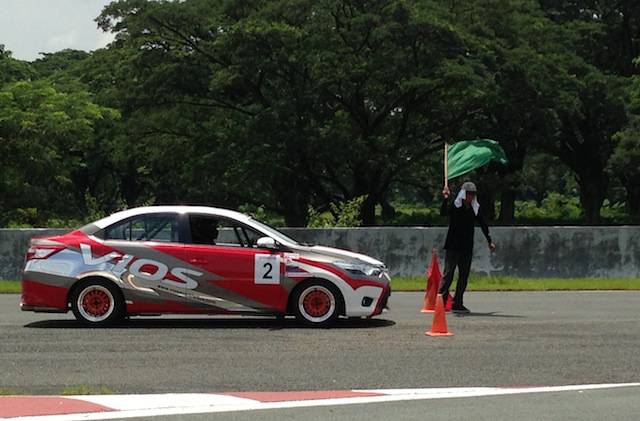 Stop, steer, and do it again

Our instructors told us that the brakes on the Vios 1.5G are extremely good, and I have to agree. Featuring discs brakes on all four wheels, we tested out their claims on the farther end of the main straight of CIS.

We were told to brake the Vios Cup Car to a full stop without engaging the anti-lock braking system, a technique that involves pushing the pedal to a point just before it hits the bump-stop on the firewall. The reason for such a maneuver hinges on preventing the ABS from kicking in, as it will take away some control from you. We also didn't want to shut off ABS completely, as it could result in a flat spot on the tires; something that would pretty much put your race to an uncompetitive end.

The most basic rule of racing is that you have to complete all your braking in a straight line. In a perfect world that holds true, but there will be some trail braking involved to be fast on this circuit.

After getting our braking techniques down pat, the main straight was rearranged for a quick left-right-left-right slalom and back. This will be a test of the Vios Cup Car's grip and weight-transfers, essential for a technical track such as CIS.

It's easy to forget that the Vios Cup Car is equipped with an LSD, and thus the screeching outer tire that got me to back off a bit. Once used to it, I pushed the Vios to what I can get out of the tires and suspension.

The braking, off-the-line acceleration and grip are superb given the dusty surface and the fact that these are not purpose built racecars but modified street cars you can get from any Toyota dealer. It's also impressive given that Toyota hasn't been known for performance... not for a long time. 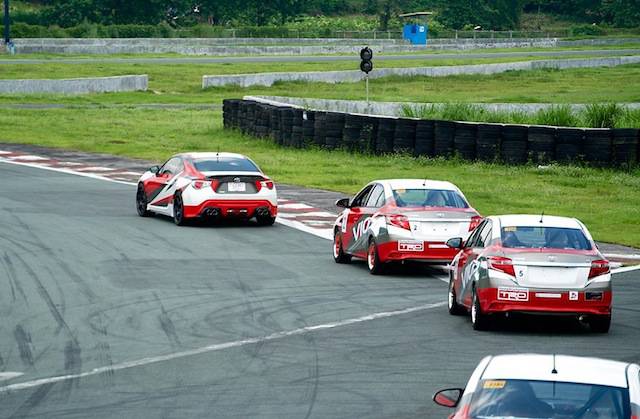 Sorry Battlestar Galactica fans, FTL in this environment means follow the leader, as we were all to line up and drive behind the pace car; in this case, the Toyota 86 TRD.

The track for this exercise is the same track to be used for the exhibition race come October 12: the Clark International Speedway short course. The objective was to show us the lines of the track at a leisurely pace at first and gradually accelerating with each lap.

The Toyota 86 Pace Car built up the speed every time we passed the start/finish line, showcasing the qualities of the Vios Cup Car. The lightness, the feel and the stability of the car meant it had far higher limits than what I expected coming into this training exercise. The noise reverberating in the cabin was music to my helmeted ears, and the OMP pedals and their positioning made heel-and-toe quite easily achieved. 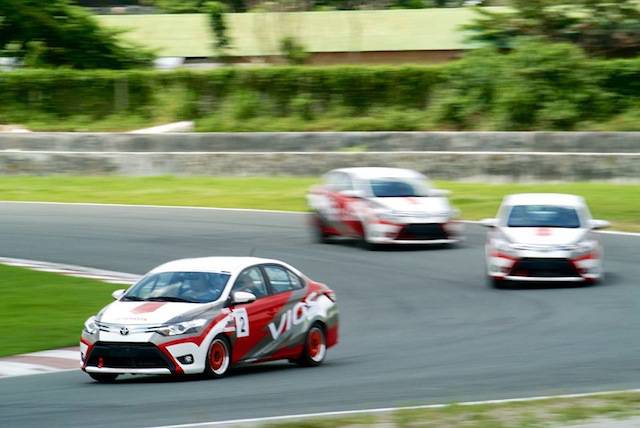 Also of note was the gearing. From our limited time on the first test day, the Vios had good ratios that were very well suited to the layout of the short course. The faster corners of the short course usually involve a 3rd gear entry and a kick down to 2nd a little before the apex. The slow corners were all in the powerband of the RPM range.

As we picked up the pace, I tried jumping the curbs a little bit more to see how stable the car truly was. Again, it recovered composure well after clipping the high curb which, at racing speed, will be important. Stability will be key to the last corner before the main straight; as the red and white curb has caught many professional racers off guard, as evidenced by the numerous tire and paint marks on the retaining walls of the main straight. 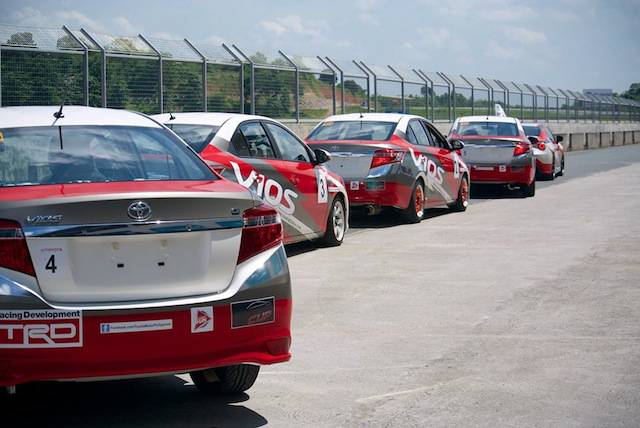 We're still over a month away from the 2013 Toyota Vios Cup Exhibition Race, and already we have a lot of testing to do before we can be considered fit to race wheel-to-wheel on Saturday, October 12. So far the plan involves having 12 cars with the celebrities and the media together on one grid.

Also taking place on the same day in between the two race heats of the Vios Cup Exhibition Race will be a proposed track day for the Toyota clubs. If you're in that part of town, pay the Clark International Speedway a visit as there will be a grand party right after the races. If rumor serves, I think Ely Buendia might be playing for the attendees.

The Exhibition Race also serves as a prequel to what will take place next year, wherein a planned 35-car grid of novice racers are expected to race in the 2014 Toyota Vios Cup. Customer cars, they all will be, and with a target price of just under PhP 1M (tentative) for the race car itself and training from TRS, it's a steal. 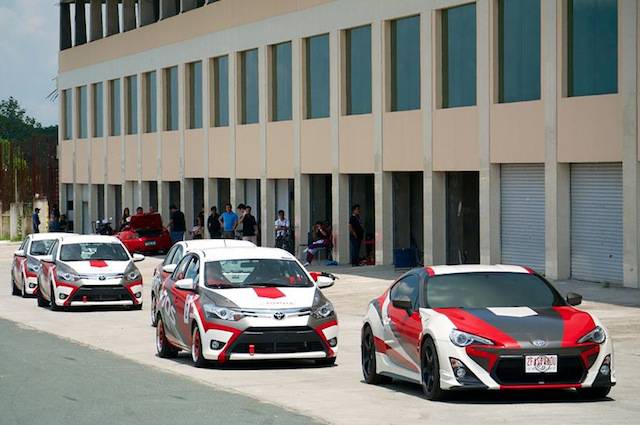 There's no doubt about it: Toyota is reviving motorsport in the Philippines.

You just know that when the country's number one automobile manufacturer and brand gets involved in racing, it's going to be big... really big. The upcoming Toyota Vios Cup serves as a grand example of that.

If you're a motorsport fan, a tuning fan or just curious, drop by Clark on October 12 and watch Toyota Motor Philippines Corporation truly start the fun.

They say racing improves the breed. Mitsubishi Motors Philippines puts their new Mirage Sedan to the test with a Precision Driving Competition.