JetAlliance fly through the murk to take first blood

As morning dawned over Silverstone on Saturday, there was a tangible sense of excitement in the air, up and down the garages on pitlane, and the FIA GT Championship lived up to the excitement beautifully. The race on Sunday had just about everything- incidents aplenty, adverse weather, and a finish that had nerves jangling and emotions running.

Saturday's qualifying was an interesting affair, with the standard two sessions providing some surprise, and some humiliation. As usual, GT2 and G2 came out first, for their 15 minute session, and they were greeted by slightly damp conditions. The man on fire at first was Richard Westbrook, grabbing his Prospeed Porsche 997 GT2 by its proverbial horns and throwing it around. He would stay on pole (in worsening conditions) until just about the fall of the flag, when Andrew Kirkaldy swept through to nick it in the final seconds for CR Scuderia and Ferrari in 1:56.632, beating Westbrook's 1:57.662 benchmark. Sean Edwards in the Bratislava Saleen was fastest in the session (1:55.459) and so took G2 pole and a stunning 3rd overall.

GT1 came next and after a red flag caused by the cars coming out too early and having to start again, it became immediately obvious that the flag had helped a number of cars- many changed tyres and came out on wets to combat the damp track. Straight away pushing the limits was Bouchut in the SRT Corvette, getting himself a round of applause for a lovely pirouette at the exit of Luffield. At first, GT1 were slower than GT2- the wet track making it hell with the extra power. Eventually though, the GT1 cars found their feet and Marcel Fassler emerged on pole, his 1:55.220 good enough to beat Bouchut's 1:55.303. In the end, the top 6 were covered by less than a second! The big losers were Kumpen and Longin, their Saleen ending up over 12 seconds off pole down in 26th place.

For race day - grey was the order of the day, with poor visibility and damp track leading to interesting decisions to make on tyres- CR Scuderia boss Chris Niarchos saying that the track was ok at the start of the morning when it was wetter, and the cars could run wets, but after that there was maybe not enough water on the track for that. Fassler was fastest in the warm up, over 4 seconds shy of qualifying pace. 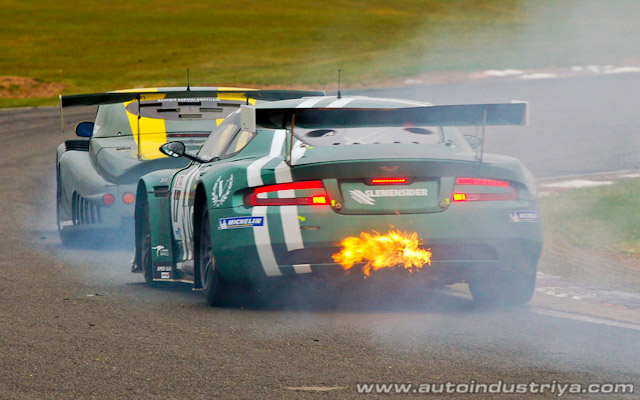 Up and down the grid, tension was building up to the start at 12:15, and then it let loose in fairly spectacular fashion. Bouchut swooped for the lead at the first corner, and there was fairly heavy contact between him and polesitter Fassler- both continue undamaged, and Bouchut leads. Soon though, Wendlinger has got the lead for JetAlliance, and Fassler follows him for a few laps before Wendlinger spins at Luffield- on board pictures showing how his desperate attempts to catch the rapidly sliding car fail on the slippery surface. In GT2, Toni Vilander was having it easy for AF Corse, a slightly different wet tyre helping him pull away and run as high as 8th overall at times. The race settled down, and soon there was a new star - Gigawave, with the Aston Martin and Alan Simonsen. The only team to start on intermediate tyres, they struggled a little at first but soon their pace improved and the gamble paid off handsomely- and as everyone else pitted, they made hay while the sun didn't shine and by the time he'd handed over to Philip Peter and switched to slicks, they were in control.

But sadly for them, there was heartbreak with just minutes to go, as a safety car negated all the hard work (it is debatable that they would have won without the safety car though, their lead of 30 seconds not enough according to team boss Steve Hagger, who reckoned they needed a minute).

Still needing to make their second mandatory stop, Peter dived in and rejoined in the lead, but the pack closed up tight behind him, and within a couple of laps his more worn tyres forced him to succumb to Ryan Sharp at Brooklands, and then the three leaders (Sharp, Peter and Bartels, all the way from 12th on the grid) went almost three abreast through Luffield, and Peter was unfortunately hung out to dry by Bartels who swept through as they flew towards Copse. There was a genuine palpable sense of disappointment in the Gigawave garage as the team saw their charge so sadly relegated. The safety car was brought out for Sean Edwards in the Saleen, who had lost a wheel at Club after the team had struggled to sort the car out at its previous stop. The wheel would last less than a lap then ended up in the middle of the track. Behind the leaders, as the safety car pulled in, there was drama at Copse- Ramos for Vitaphone stabs at Deletraz's Corvette and loses control, sending both into a spin. Both would rejoin OK. In GT2, Kirkaldy looked like he might charge down the AF Corse leader, but was tagged at Stowe by Deletraz, after the Ferrari driver had lost his wing mirror early on and so didn't see the Chevrolet's attempt to lap him. And so Vilander and Bruni would take GT2 honours, ahead of Kirkaldy/Bell. Paolo Ruberti and Mateo Mallucelli would take third for Pirelli shod BMS.

But it was JetAlliance who left Silverstone most pleased- as the flag fell at the end of 2 hours, it fell on Ryan Sharp, who held off then put a small gap on Michael Bartels, happy with second place after starting 12th (his rescued by Andrea Bertollini's stirring first stint, flying past cars all the time). So the podium looked like this- Karl Wendlinger and Ryan Sharp on top for Aston Martin, Michael Bartels and Andrea Bertollini's Maserati second, and the unlucky Gigawave Aston finishing third. Xavier Maaschen would turn in a controlled performance in his first GT1 race to steer the SRT Corvette he shared with Christophe Bouchut to 4th, just ahead of Mike Hezemans and Fabrizio Gollin for Phoenix in their similar car. 6th were Lukas Lichtner-Hoyer and Alex Muller for JetAlliancce, rounding off a great weekend for the blue Astons. After being just about on top (or very near the top) of every session, Fassler and Deletraz would have to make do with just one point, for eighth place, behind all the other Chevrolet C6Rs, and behind Miguel Ramos and Xandre Negrao for Vitaphone- who were pleased to get such a good pair of results (2nd and 7th) after being a little off the pace for much of the weekend. Rounding out the top ten were Vincent Vosse and Greg Franchi in 9th and the Reiter Lamborghini of Peter Kox and Russian Roman Rusinov in 10th. 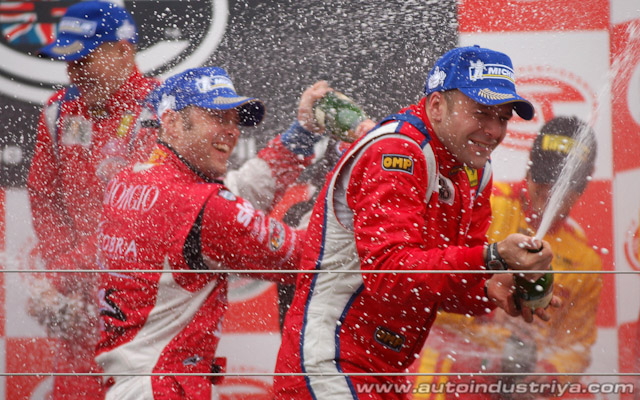 In G2, it was the Go To One Mosler team who emerged victorious, with a one two finish after Edwards' lost wheel and an accident causing irreparable damage to the Gillet Vertigo. It was an impressive display of resilience by the German team to be on the track at all, let alone win, after the team was denied scrutineering until Saturday afternoon (missing the free practice and pre qualifying sessions) thanks to paperwork problems. They were admittedly off the pace, but with so little running it was a stunning result.

An interesting weekend then- and one full of entertainment. Roll on Monza!

The Formula DRIFT franchise recently staged its first International event outside of North America. The Changi Exhibition Centre in Singapore was filled with tire smoke in a historic event as the region's top drivers went against some of the world's best professional drift drivers.

2007 Lateral Drift Champion Alex 'X' Perez started the 2008 season on a high note by winning the first event in Greenhills.