The second round of Vios Cup 2016 saw drivers going fender to fender in the tight streets of Filinvest. When the dust settled, it was Andres Calma who was victorious in the Super Sporting class and extended his points lead even further. This round also saw a new face on the podium with rookie Aira Medrano taking her first win in the series. 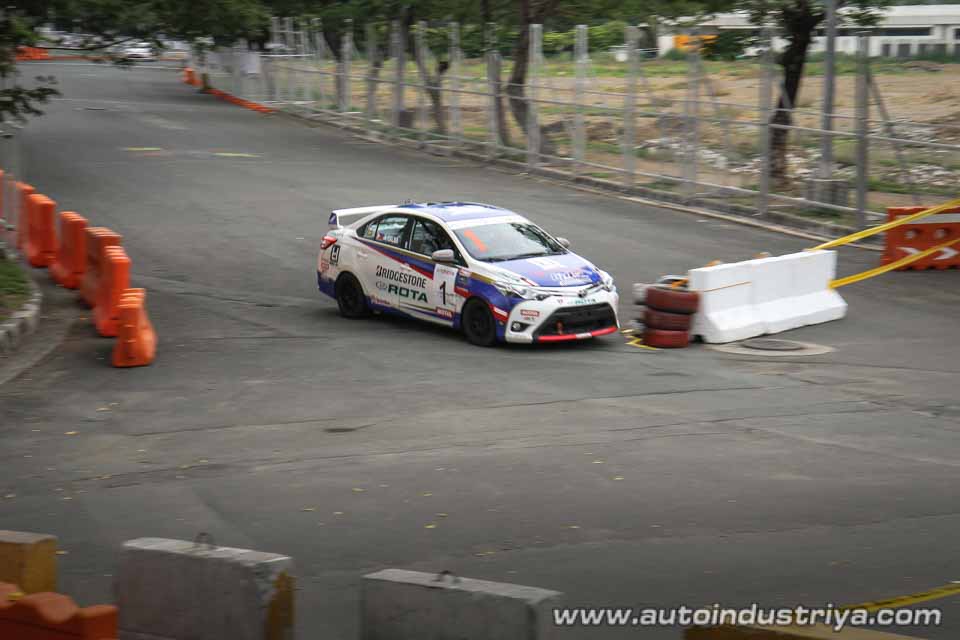 Andres Calma started his weekend right by qualifying pole with a laptime of 1:17.077. Right behind him was Dominic Ochoa posting a time of 1:17.575 while Estefano Rivera set the third fastest lap at 1:17.941.

Calma immediately went defensive on the grid, positioning his car slightly to the right to block off Rivera by the first turn. Rivera was unfazed by the tactic, following the reigning champ closely in the opening laps. Meanwhile at the back of the grid, Basti Escalante got punted from behind, sending his car into a half spin and taking out a few tire barriers in the process. Track marshalls were quick to rearrange the tires which prevented the need of the safety car.

Rivera and Calma were soon pulling away from the rest of the pack, dicing each other tight bend after tight bend. Heartbreak would happen to Rivera however, clipping the barrier and breaking his tie-rod in the process. Inheriting second was Dominic Ochoa while team mate Allan Uy was battling with Raymond Ronquillo for the final podium spot.

Halfway through the race, Calma had extended his lead by over three seconds. Ochoa on the other hand had to fight hard for second place with Ronquillo staying glued to the back bumper of the Toyota Quezon Avenue driver. At this point, the field stayed the same until Bobby Domingo slammed into the barrier, ripping out his front left tire and breaking his suspension. Since his car was away from the racing line, marshals decided not to bring out the safety car. The incident allowed Allan Uy to breathe a sigh of relief as he now sat comfortably in fourth. Carlos Loinaz, Pauland Dumlao and Basti Escalante were sitting in fifth, sixth and seventh at the time.

Trouble struck Dumlao on the final lap when his car suffered mechanical failure. The CV joint in his Vios broke and sent the shaft straight into the engine block, ending his race and his weekend. Despite that, Dumlao was able to score one point for finishing tenth. At the opposite end of the field however, Andres Calma had crossed the line with a 6.6 second gap ahead of Ochoa. Ochoa returns to the podium for finishing second with Raymond Ronquillo in third. Allan Uy finished fourth, followed by Carlos Loinaz and Basti Escalante in fifth and sixth respectively. Jette Calderon, Kieth Bryan Haw and Bryan Co round up the finishers of the first heat. 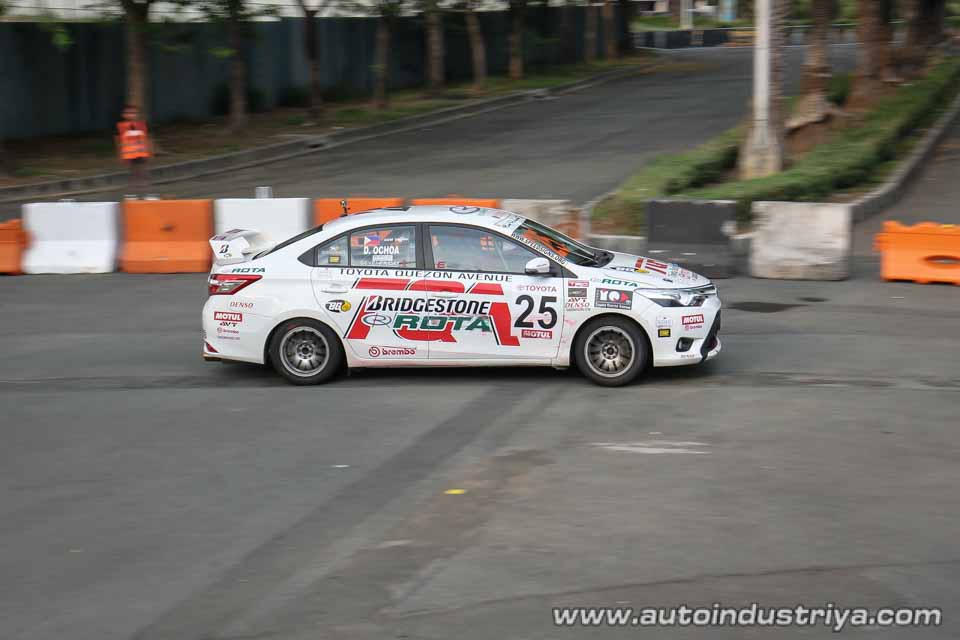 With grid positions for race 2 based on the first race's result, Calma started on the front row yet again and alongside him was Ochoa. Trouble would hit Bryan Co when he was pushed out of the way by Escalante, spinning him out and almost into the barrier. The safety car was brought out after the incident and it was the race over for Co.

The safety car did nothing to shrink the gap between Ochoa and Calma with the latter pulling away quickly on restart. Allan Uy on the other hand took advantage of the inner racing line, slipping past Ronquillo to take third. Ochoa would lead the three car train for second place with all the drivers within a second of each other.

Further back, Escalante tangled with yet another car, this time with Estefano Rivera. Escalante tried to dive on Rivera in the first turn but as the latter closed the door, Escalante's front bumper made contact with Rivera's quarter panel. The contact sent Rivera wide, nearly hitting the tire barrier in the process. Back to the battle for third, Ronquillo attempted a dive on Uy. There was slight contact between the two but nothing major. This gave Ochoa breathing room to keep second. When the checkered flag waved, it was Calma yet again taking the win. Ochoa finished second, followed by TQA team mate Allan Uy. Raymond Ronquillo takes fourth with 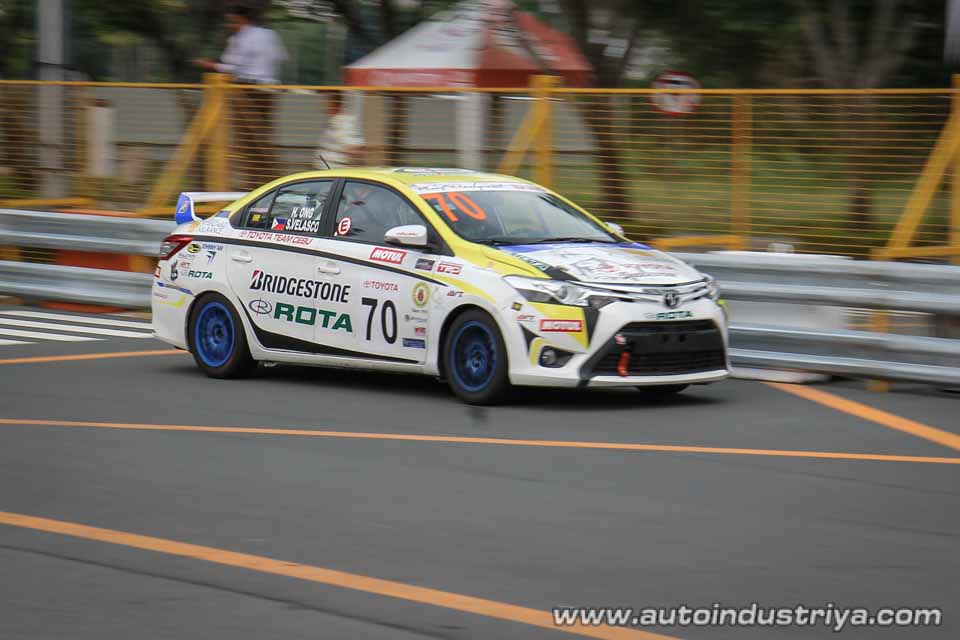 For the Sporting Class, Sam YG's qualifying time of 1:18.746 placed him in front of grid for race day. Nearly a second behind was Sean Velasco who posted a lap time of 1:18.755. Qualifying third was Ben Grimes crossing the line at 1:20.153.

Unfortunately for Sam YG, he was not able to complete a lap with his car limping around the track during warm up. As a result, Velasco inherited the lead with Sam Grimes alongside him. When the green flag waved, Velasco ran away with the lead when Grimes stalled his car, causing a major pileup that put several drivers out of contention including Paolo Rodriguez, Jeje Villena and Ferdi Santos. During the shuffle, Toyota San Fernando drivers Steve Bicknell and Ton Ramos jumped up several spots. 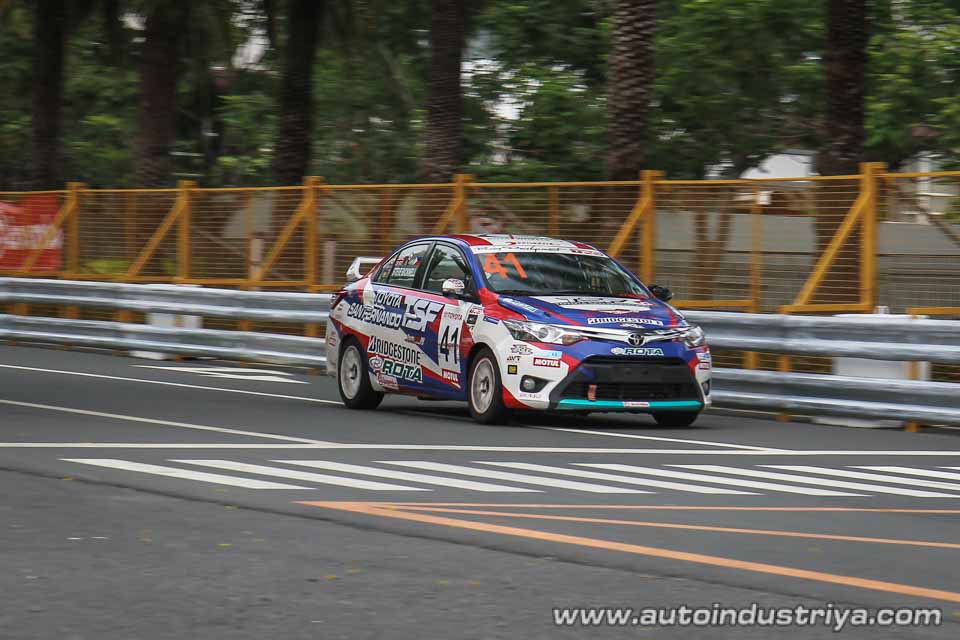 Velasco was holding a significant lead halfway through the race and remained unchallenged all throughout. The top three, now consisting of Velasco, Miko Maristela and JV Ejercito were all separated by large margins. Steve Bicknell tried catching up to Ejercito in third but was unable to close the gap. Towards the back of the field, Ben Grimes was on a recovery drive while brother Sam Grimes was going fender to fender with Robert Lilles. Gerald Loy and Lord Seno were also fighting for position and Loy eventually succeeded in overtaking Seno. Robert Lilles saw himself getting his bumper bashed by Sam Grimes. Grimes was later disqualified for unsportsmanlike driving. 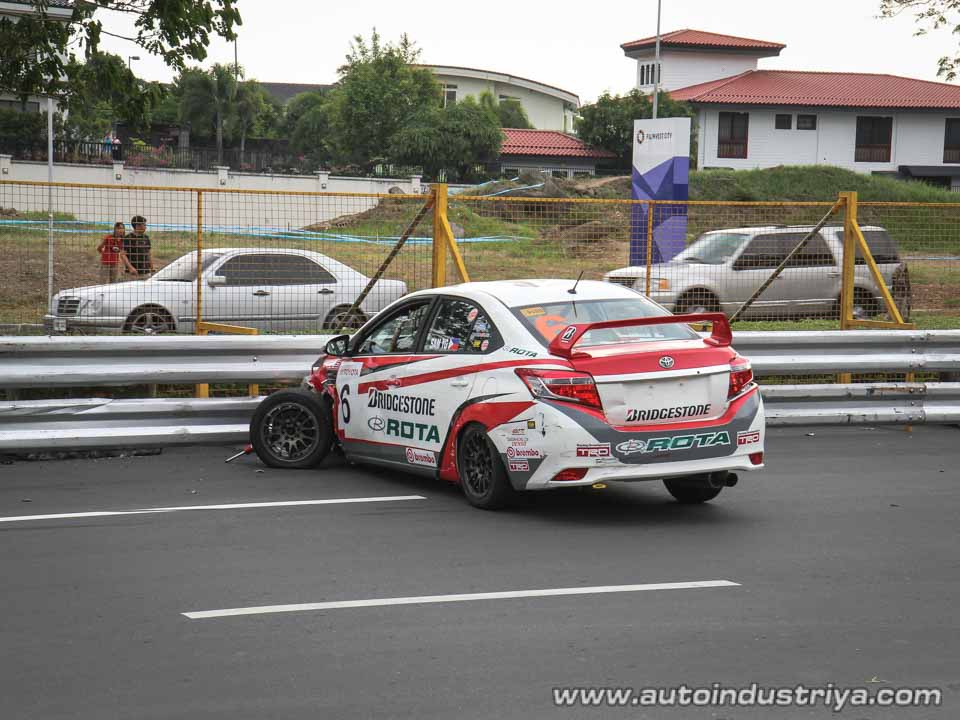 Race two ran cleaner than the first one with everyone making a clean start. By the second turn however, Ton Ramos clipped the inner barrier, forcing him out of the race. Meanwhile, Robert Lilles and Sam YG were slowly moving up the grid.

During Sam YG's drive through the field, he reached as high as eighth place before spinning out and crashing into the barrier. He was able to continue racing only to crash again after two laps. Gerald Loy jumped three spots to fifth place but was soon under pressure from Lilles. The rest of the race carried on without incident with the top four racers from the first heat retaining their positions. Loy was able to hold back Lilles to keep fifth place. Taking seventh was Miguel Diaz, followed by Lord Seno. Rounding up the top ten were Phoem Barranda and Ferdi Santos. Ben Grimes and Paolo Rodriguez also finished the race. 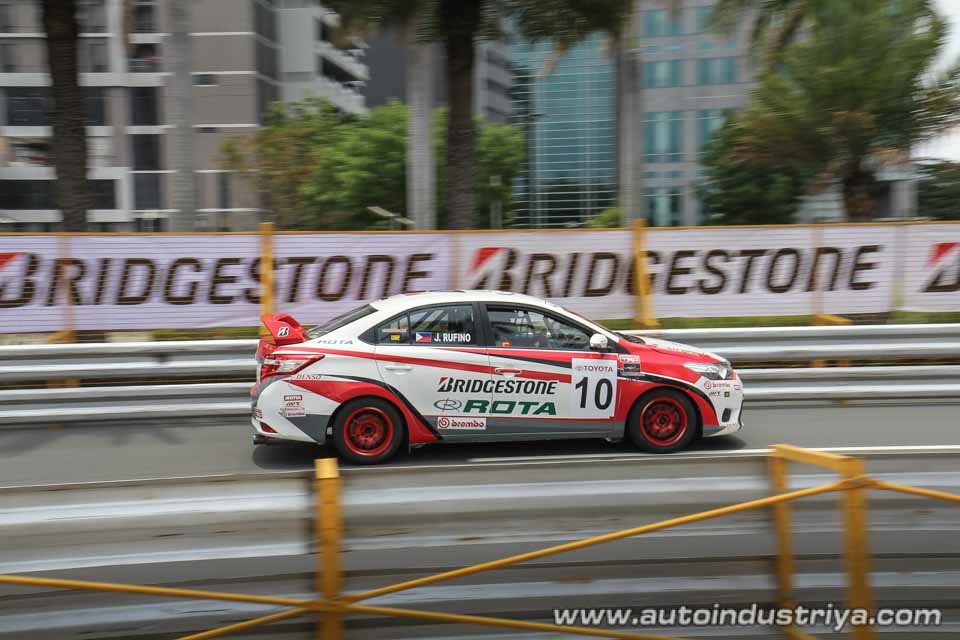 Garnering pole position was Jinno Rufino after he clocked in 1:23.360 during qualifying. Bobby Pangilinan missed out on the pole by just 0.274 seconds with a best time of 1:23.624. Newcomer Marc Martinez posted the third fastest lap in qualifying with a lap time of 1:24.290.

Rufino made the most of his pole position with a rocket start. Pangilinan on the other hand bogged down slightly and was overtaken by Martinez just before the first turn. Gel Napat would fall victim to the dreaded chicane, slamming into one of the concrete barriers. On lap 4, Arci Munoz retired from the race. The following lap, Dindo Dysico was called out by the marshalls for loose panels hanging on to his car. He was forced to retire from the race.

Roy Bunag benefitted from Napat's crash in the chicane, grooming him for a top five finish. Meanwhile, rookie Aira Medrano was slowly reeling in Pangilinan for third. Further back, Oliver Matias was also moving up through the field. Following his grid start of tenth, Matias soon found himself in seventh place after overtaking Fabio Ide who was sliding down the field. 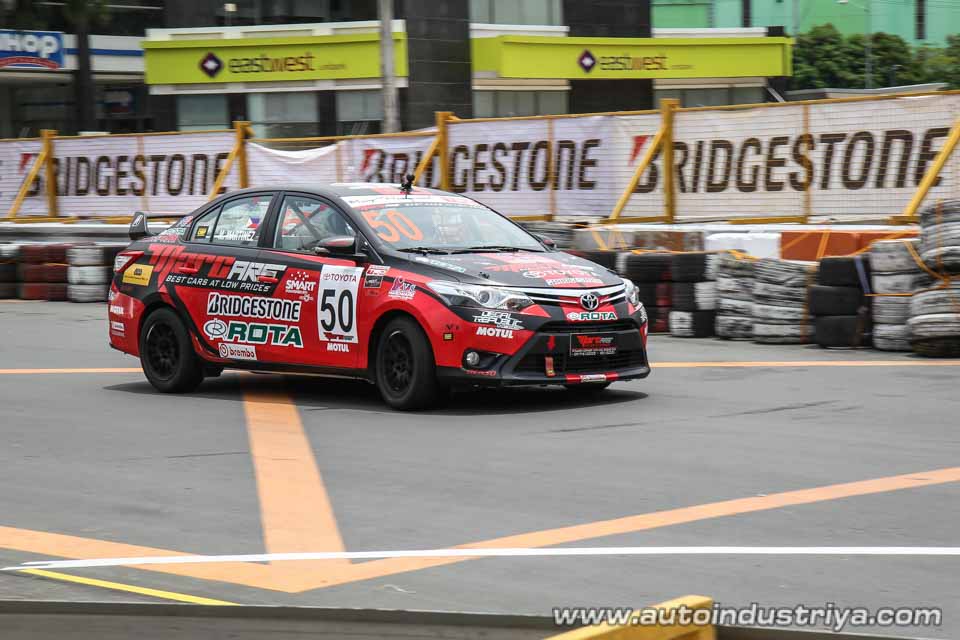 Race two for the mixed Promotional and Celebrity grid got off to a smooth start. Jinno Rufino was aiming for a back to back overall win and was off to a good start when he held off Marc Martinez. Meanwhile, Aira Medrano snatched third overall from Bobby Pangilinan, putting her second in the Promotional Class. She soon set her sights on Marc Martinez's rear bumper. 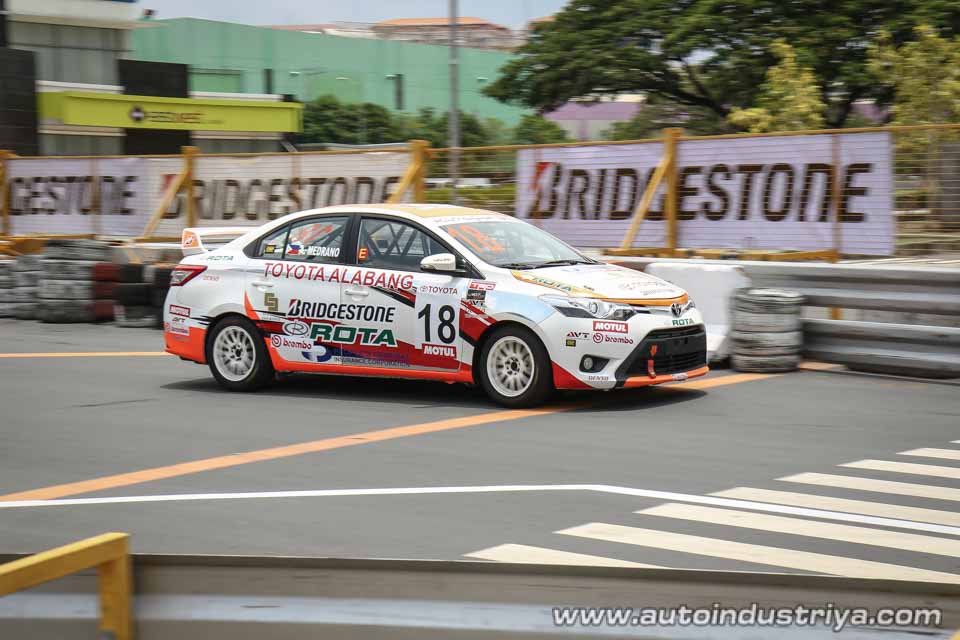 Jericho Rosales was also going places in race two. Starting sixth on the grid, Rosales was catching up to Bobby Pangilinan. Rosales made a clean dive on Pangilinan to take fourth overall in the mixed grid. Medrano was setting quick times in the Promotional class and eventually got close to Martinez's Vios. After Medrano made a clean overtake on Martinez, she eventually caught up to Jinno Rufino for the overall lead. Medrano and Rufino were both leading their respective classes but that didn't stop the rooking from making a move on the celebrity driver. The race ended with Rufino taking the overall and the Celebrity Class win while Medrano takes the top spot for the Promotional class. Medrano also set the fastest time overall at 1:22.425.

Marc Martinez placed second in the promotional class and continued his podium streak from the first round in Clark. Third in the Promotional Class was Bobby Pangilinan and in fourth was another rookie, Toyota San Fernando's Oliver Matias who finished fifth in class in the previous race. In the Celebrity Class, Rufino makes it three wins in a row while Jericho Rosales finished a solid second. Rosales also set the fastest time for the celebrities at 1:23.020. Fabio Ide rounds up the podium places for the Celebrity Class.

The second round of Vios Cup Season 3 saw the return of racing in the metro. With higher level of training the drivers recieved, there were significantly less incidents from last year in Manila. The drivers put up a good show this round with exciting overtakes and side by side action. Perhaps we can all expect even more excitement for the next round in September.