In previous years, the Macau leg the World Touring Car Championship played a crucial part in determining and crowning of the series champion for the year. But with the Championship settled and Yvan Muller already crowned the 2013 Driver’s Champion before coming into the last two rounds of the WTCC, hopes for a heated battle on the Macau Guia Circuit seemed unlikely.

In qualifying, Muller started the Macau leg on a high by taking pole position clocking in at 2:28.933 aboard his Chevrolet Cruze (#12). Tiago Montiero steered his Honda Civic (#18) to a 2:29.933, exactly one second behind the polesitter, while Gabriele Tarquini qualified in third in the other Honda (#3) with a 2:21.991 laptime.

With all 34 entrants to the 23rd Round of the WTCC ready to set the track on fire, there was nothing to lose as the championship had pretty much been settled. All were expected to fight for the glory of a Macau Grand Prix win. But as the cars were called to assemble at the pre-grid, drama unfolded as Tarquini’s (#3) Honda Civic WTCC failed to line up his car to take his 3rd starting position and was stuck in the pits with an apparent engine problem requiring an engine change.

When the starting lights turned off to signify the start of the race, Tarquini (#3) was still nowhere to be found, which meant Rob Huff had a clear step up to a podium position. The first lap of the race had begun and ended with surprisingly no racing incidents. Yvan Muller (#12) in first position followed by Monteiro(#18) and last year’s champion Rob Huff (#1) running in third position.

On lap 2, Tom Chilton(#23) crashes his Cruze into the barriers, but thankfully the incident did not cause any safety car condition and the races continued without incidents for another lap. On lap 4, James Thompson(#10) heads for the pits and retires his Lada Granta due to technical problems.

On Lap 5, as the leaders maintained their pace and positions the main battle on course shifted towards the middle of the pack, for 7th position, with Pepe Oriola’s (#74) Cruze, Marc Basseng’s (#38) SEAT Leon and Stefan D’Aste’s (#26) BMW 320 TC applying pressure on each other and waiting to snatch a place. Adding some excitement to the crowd was Hugo Valente (#20) as he comes in too hot and out-brakes himself and overshoots his SEAT Leon WTCC at Lisboa Corner.

As the checkered flag dropped Yvan Muller (#12) in his Cruze takes the win from pole position with Tiago Monteiro’s (#18) Honda Civic WTCC in second and Rob Huff’s SEAT Leon completing the podium standings. Muller also posts the fastest lap of the race with his 2:31.573 time. 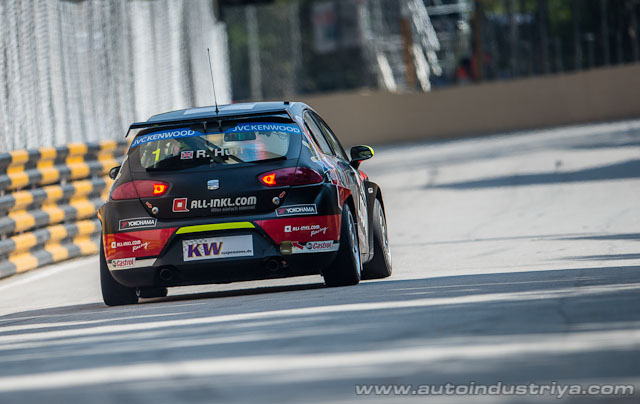 With The Top Ten finishers of the previous round  starting in reverse order, the ultimate round of the 2013 FIA WTCC Championship went underway with Tom Coronel’s (#15) BMW 320 TC leading the pack on the standing start. Tarquini’s (#3) Honda Civic WTCC completes the engine change and is allowed to join the race but must start form the pits having missed the first race.

As the lights went out for the start of the race, a mad scramble for positions in the opening lap ended in a pile-up on the short straight after the first left-hand kink heading into Mandarin Bend. The pile-up involved several cars causing the racecourse to be blocked and for the race officials to bring out the red flag signifying the race stoppage and restart.

By the fourth lap Nash(#14) had overtaken Chilton (#23) to take third position while   Monteiro(#18) found his way to the pits and retires. The battles ensued at the top of the roster with Coronel (#15) on his BMW on top, followed by Thompson(#10) in his Lada and Briton Nash (#14) in his Chevy Cruze .

On the fifth lap Chilton (#23) slowed on track and was collected by the Macanese driver De Jesus’ (#73) Honda Accord Type-R causing a major pile-up again and another race suspension.

The race restarts on Lap 7 under safety car and on the eight lap, normal racing conditions resumed with Coronel (#15) still on top followed by Thompson (#10) and last year’s champion Rob Huff (#1) in Third Position. Later in that lap Thompson (#10) gets tagged by Oriola (#74) causing him to hit the barriers and retire from the race.

By the 9th Lap Rob Huff takes the race lead from Coronel (#15) and on the final lap, Oriola (#74) manages to slide past Coronel to snatch second place, relegating Coronel to third position as the checkered flag dropped.

The first-ever Drift Muscle Philippines was held at the Quirino Grandstand with a course designed by Keiichi Tsuchiya.

Get a free swab test at Manila's drive-thru facility