The second season of the Vios Cup opened last March 21 at the Clark International Speedway, and as soon as the green lights went on, the excitement began. Dominating the weekend with a 2nd and 1st place finish was Pauland Dumlao of Toyota San Fernando in the sporting class. Miguel Diaz of Toyota Alabang and celebrity Phoemela Barranda split the promotions class with a win each.

Qualifying in pole for the sporting class was Toyota San Fernando's Pauland Dumlao clocking 2:27.086. Newcomer Daniel Miranda of Toyota Balintawak clocked a fastest lap 2:27.116, but was later disqualified and moved to the back of the grid for a technical infraction. This moved Toyota North EDSA's Luis Gono up to second on the grid with his 2:27.133 laptime. Toyota Quezon Avenue's Allan Uy qualified in 3rd with 2:27.564, Estafano Rivera of Toyota Alabang qualified in 4th with 2:27.742, while Victor Buensuceso of Toyota Makati clocked in 2:27.888 for 5th on the grid. It would be interesting to note that the top 5 qualifiers were all within eight-tenths of a second. 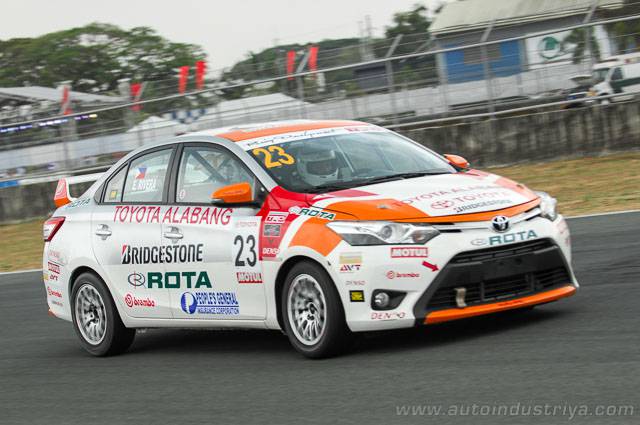 With some drivers running their second season, competition was more fierce than ever. The sporting class began with Gono fumbling at the grid giving polesitter Dumlao a good headstart, Rivera followed in close second. The next 12 laps saw the two swapping positions with bumper to bumper drafting and diving between Dumlao and Rivera. Coming from the back of the grid was a hard charging Miranda to prove that his pace is just as quick as the leaders, his pace unfortunately brought some contact with other cars, he was thus demoted from 4th to 7th.

After numerous brake dives and intense side by action, Pauland Dumlao crosses the line first but a steward’s inquiry led to him being demoted one spot, giving Rivera the first win of the season. Andres Calma finished a relatively trouble-free third place to round up the podium. Toyota Quezon Avenue drivers Uy and Dominic Ochoa took 4th and 5th positions. 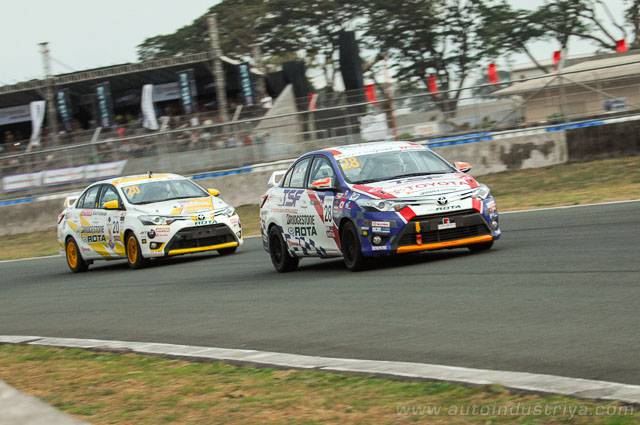 In race 2, Dumlao started off with a dominant lead thanks to a good start getting a good advantage ahead of Rivera. Carlos Loinaz of Toyota Batangas was an early casualty as he stalled on the grid due to broken driveshafts.

All eyes however, were on rookie Daniel Miranda who slowly inched his car ahead of the pack from 7th. It was a hearbreaking race for race 1 winner Rivera who was tagged hard from behind suffering a loose bumper and exhaust.

After the mayhem Miranda found himself in second as far as three seconds away from the leader. As the race progressed, Miranda was soon eating up big chunks of Dumlao's lead as the success ballast was taking its toll. Miranda continued sticking to Dumlao’s bumper looking for an opening but Dumlao kept fighting the attacks of the rookie.

Seasoned driver Allan Uy was busy dicing with Basti Escalante for the second half of the race as the two swapped positions with each other. However, experience prevailed as Uy went ahead of the young driver for third. 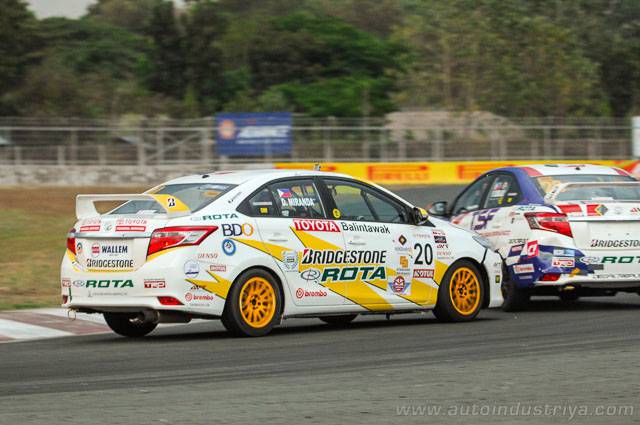 In the penultimate lap however, Miranda dove on the inside of Dumlao, almost spinning the latter out. Miranda, instead of attacking the inside, kept his position behind Dumlao giving Dumlao a few seconds of breathing space. As quickly as the incident ended, the two began dicing again and, after a hard fought battle, Pauland Dumlao emerged victorious with Daniel Miranda right by his rear bumper. Miranda however was demoted to third after his contact with Dumlao giving second place to Allan Uy. 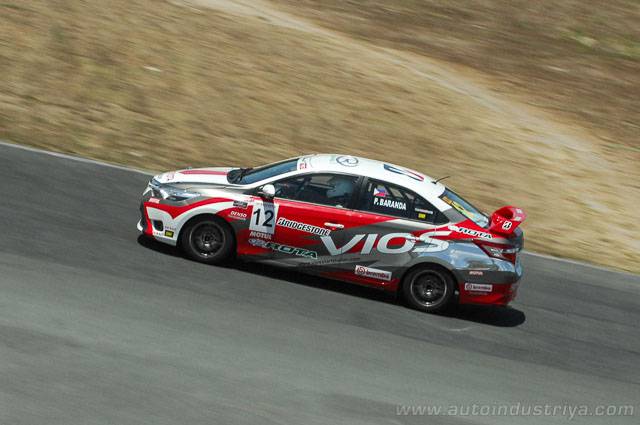 Sam YG fumbled at the start handing Barranda the early lead with Jinno Rufino following not too far behind. Going into turn two, Rufino closed the door hard on Sam YG who was diving on the inside. This led to Rufino's car going into the gravel pits while Sam YG's car suffered a flat tire and retired. Rhian Ramos lost a position in the mayhem with Miguel Diaz sliding into second. However a last minute dive from Ramos to retake lost position resulted in contact with Diaz, unfortunately her bumper got stuck underneath her car forcing a retirement.

A few cars behind a late braking manuever by Sherwin Hing sent himself to the gravel pits on turn 9. The incident brought out a lengthy safety car period to clear the beached cars for safety. Barranda found her seemingly lengthy advantage cut short into a car train behind the safety car. After a long wait, the green flag waved yet again as Barranda found herself under pressure from Diaz in second place. The two lead cars had a good, clean battle with the checkered flag waving with Phoemela Barranda in the lead, winning the promotional class and getting the lead in the celebrity cup. Diaz finished second with Senator JV Ejercito rounding up the podium in third. 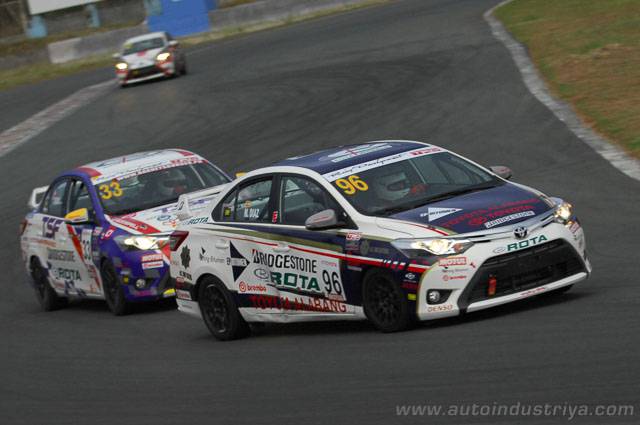 The second race for the Promotional class started with Phoemela Barranda on top of the starting grid. This time, no major incidents occurred entering turn despite the field being bunched together. Barranda had a sizable lead during the first half, but eventually started slowing down, likely due to fatigue; giving Diaz the advantage. After taking the lead, Diaz simply kept his pace as the ones behind him battled for position.

Making up for the incident in race 1, Sam YG showed what he can do by making an dive on Jinno Rufino and Toyota Batangas' Jeje Villanueva. Sam YG was able to stick the move and began his chase for Tonton Ramos. Sam YG darted left and right to take over second with Ramos defending his position by hugging the inside line.

The race would end with Diaz in the lead with Tonton Ramos in second and Sam YG in third.  Barranda jumped the start and was given a 15 second penalty for the mistake, demoting her to 5th. Toyota Bicutan's Arthur De Jong finished 5th was promoted a position after Barranda's penalty. 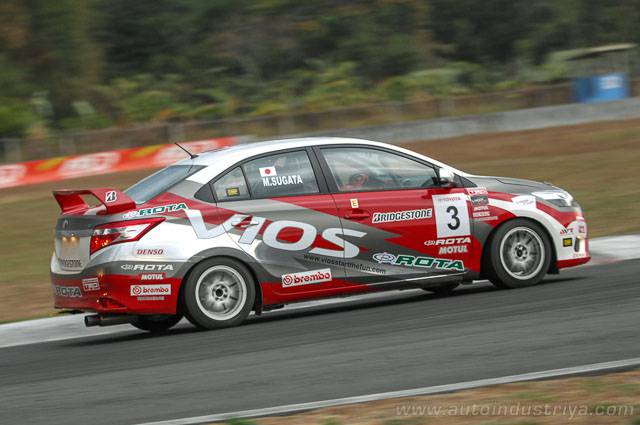 It’s also worth noting that the president of Toyota PH, Michinobu Sugata, joined in on the wheel to wheel action. Sugata-san follows in the footsteps of Toyota CEO Akio Toyoda who races with Gazoo Racing. What does this mean for the Vios Cup? Toyota is very serious in putting in more life in Phillipine motorsports. With Toyota’s commitment to Vios Cup and this amount of excitement in one day, the 2015 Vios Cup is off to a rocket start.

After the action packed races, special awards were handed out to drivers who stood out in their performances. Pauland Dumlao racked up numerous special awards such as Brembo Driver of the Day and an award from Bridgestone Philippines for his dominant performance. Rookie Daniel Miranda also racked up numerous special awards, showing promise and as a driver to watch out for in the next leg. For the promotional class, Sam YG and Phoemela Barranda racked up special awards from Rota with Barranda also showing promise in her class. The ceremony ended with trophies being handed out to the round podium finishers and with Pauland Dumlao being the points leader in the Sporting class and leading the Promotion class entering the next race.

Nico Hulkenberg and team win the 24 Hours of Le Mans