The 2014 Toyota Vios Cup season was punctuated with drama and heartstopping action, bringing motorsport closer to the Filipino public with the largest street race ever in the country. Bringing home the gold was Pauland Dumlao of Toyota San Fernando who won both races after a last minute promotion to 1st for Race 5.

Organizers decided to run the final leg in a different format after organizers decided to double the points earned per race to 'equalize' the chances to win the championship. To further complicate things, the qualifying format was also run differently from the usual fastest lap shootout to a qualifying race where the top 10 of each bracket would join the main race where drivers were eligible for points. Those who did not qualify in the top 10 of their respective heats would be relegated to the promotional grid otherwise known as the media/celebrity race. This was done due to the tight circuit where it was virtually impossible to have 30 cars compete safely.

In the 8-lap qualifying race, it was Toyota San Fernando's Pauland Dumlao and Toyota Quezon Avenue’s Dominique Ochoa, who dominated their respective sessions from lights to flag, thereby qualifying for P1 and P2, respectively. 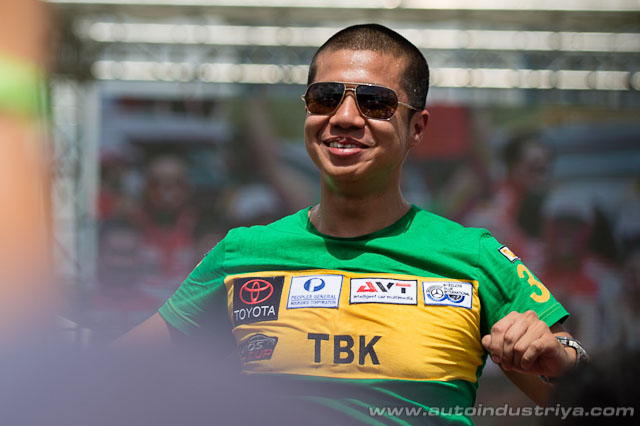 It was a heartbreaking weekend for series leader Jason Choachuy of Toyota Balintawak and Allan Uy of Toyota Quezon Avenue, as both drivers failed to qualify for the main race. Choachuy made an uncharacteristic move in the Qualifying Race colliding with series third placer Uy during the first lap. Both drivers suffered punctures on different occasions; Uy damaged his rear right tire during the impact, while Choachuy damaged his front right after passing the former on the next hairpin as he touched the outer barrier. Uy retired while Choachuy rejoined, but the latter failed to make it to the top 10. 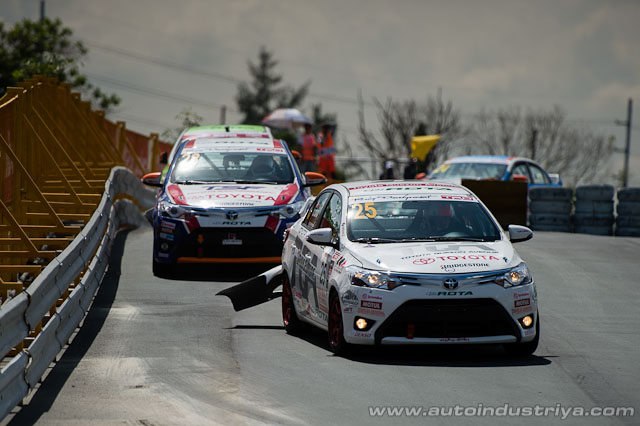 It was an exciting start as drivers jockeyed for position in the tight street circuit for points, pride and glory. It was Dumlao in the lead going into the first corner with Ochoa charging closely; Gono followed not too far behind. But several collisions behind caused the deployment of the safety car twice forcing the pack to stay close. However, the trio began to pull away towards the end of the race. With the championship on the line, the young Gono tried to charge hard and ended up tagging the rear-end of Ochoa’s car, dislodging the bumper. With a hanging rear bumper, Ochoa charged ahead to find an opening, but unfortunately hit Dumlao’s car as his brakes faded; he eventually managed to pass. At the checkered flag, it was Ochoa, Dumlao and Gono.

The Media/Celebrity race saw Sam YG on pole position followed by AutoIndustriya.com driver Vince Pornelos in P2, followed by Top Gear's Paulo Subido in P3. Pornelos got the jump on the pole sitter off the line, but an immediate crash by AutoCar's Ira Panganiban saw the race red flagged before Pornelos and Sam YG even made the first corner. The crash retired Panganiban's car for the first and second races.

The race was resumed, but with the original grid positions preserved for a rolling start format. Sam YG pulled a comfortable lead thanks to a good start as Pornelos tried to chase him. Phoemela Barranda and Paolo Subido of Top Gear ran neck and neck, but fatigue would eventually overcome the female celebrity. Seasoned driver Allan Uy effortlessly climbed up the order into third as he overtook the cars one by one. Then suddenly disaster struck, Rhian Ramos lost control going into the 'double-yellow' chicane sending her car up the barriers; she was unhurt.

At the restart, Uy managed to overtake Pornelos and eventually breezed by Sam YG to take a commanding lead. It was at this point that Subido managed to close the gap between him and Pornelos and eventually get ahead as the latter slowed down due to overheating brakes. In the end, it was Uy taking the overall win; Sam YG taking the celebrity division followed by Barranda and Jinno Rufino, Subido won the media division followed by Pornelos.

Just to emphasize how hard the course was on the brakes; drivers tried to stop their cars from at least 140km/h to 25km/h in the tight armco barricaded street circuit into three first-gear hairpins, and four other corners. 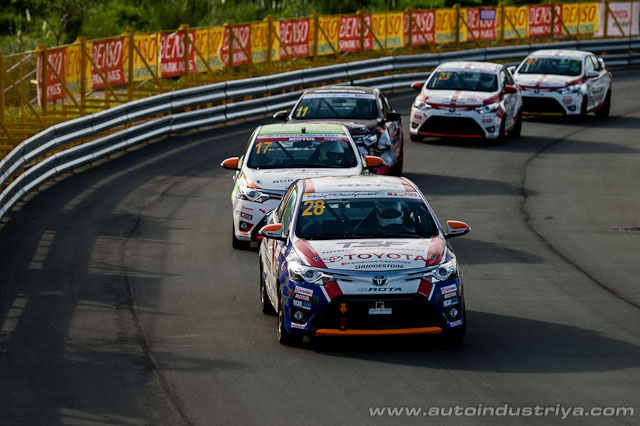 Coming fresh from a race win which added 40 points to give him newfound championship hopes, TQA's Ochoa was hoping for a win to put him on top. His hopes were shattered two minutes before race start as AAP officials made a last minute penalty decision on his contact with Dumlao and swapped their finishing order. This meant only second place and 10 less points for Ochoa, while Dumlao gets 1st with 10 more points opening championship hopes for himself.

As the race started, it was Ochoa challenging for the lead into the first corner with a slight advantage thanks to a good start; Dumlao ran wide from the inside to close the door sending Ochoa into the wall as cars behind came charging in. Carlos Castaneda joined the early casualties at the first corner mayhem, while others suffered minor damage enabling them to rejoin the race restart.

At the restart, it was starting to be a comfortable race for the young Gono, poised to win the first ever Vios Cup championship trophy with Ochoa out of contention. He maintained a safe distance from Dumlao to ensure he finished within the podium, but a hard charging Inaki Araneta of Toyota Alabang ensured that he drove an exciting race. Disaster struck as Miguel Aboitiz Diaz of Toyota Alabang lost control and rolled his car forcing out the race to be suspended again. At the second restart, it was a similar story in front, but on the next lap, it was total mayhem when the front runners uncharacteristically slowed down and sped up causing the hard charging middle to pack to come in hot. This caused a three-way collision between Toyota Batangas’ Carlos Loinas, Araneta and Andres Calma of Toyota Alabang. Araneta’s car even went airborne due to the impact from Loinas, but was thankfully unhurt. This incident forced officials to stop the race at lap 8 and count back from the previous lap. It ended with Dumlao, Gono and Araneta with 7 laps counted.

In the promotional grid, it was announced at the start that it would be contested for 11 laps only due to daylight constraint for safety reasons. Allan Uy drove a lights to flag win effortlessly as Sam YG tried to learn a thing or two from him. The celebrity result was a mirror of the earlier race, likewise the media division.

Who is the 2014 Toyota Vios Cup Season Champion?

Announcement of championship results has been deferred to the culmination event slated on November 10. With the race awarding double points, it was highly unlikely for a championship decision to be made without any protest.

UPDATE: Given the unusual nature regarding the conclusion of Race 6 in the Vios Cup Class, we are currently reviewing and requesting clarification on some of the provisions of the official 2014 Toyota Vios Cup Rulebook, as amended by Official Drivers' Bulletins.

28 cars from dealer and customer teams, celebrities and media took the field at the second round of the 2014 Toyota Vios Cup.