In this round of Vios Cup season 3, it saw bumper to bumper racing and close action in all classes. The third round resulted in new winners, as well as Andres Calma extending his lead even further. This round also saw five first time winners, namely Oliver Matias, Fabio Ide, Gerard Loy, Carlos Loinaz and Jette Calderon. 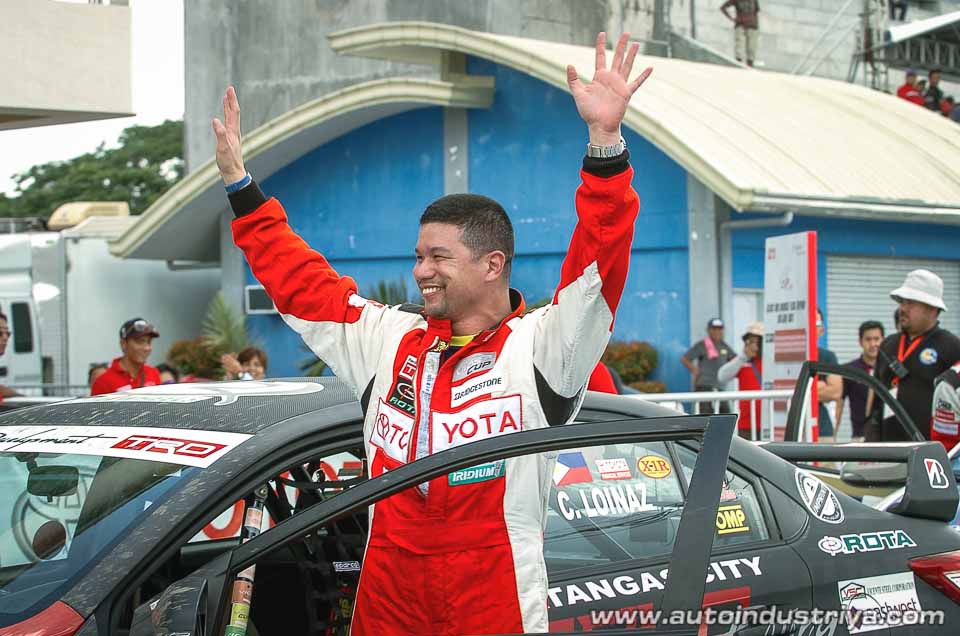 Claiming pole in the Super Sporting class was Estefano Rivera with a time of 2:26.649. Rivera's lap time ends Calma's streak of pole position starts, boosting excitement for race day. Alongside Rivera was Bryan Co with a laptime of 2:26.897. Daniel Miranda qualified third with a time of 2:27.203.

It was a dramatic start to the first race of the super sporting class. The top three runners bunched up as soon as the race started with Miranda, Rivera and Co fighting for the lead. Miranda, trying to defend his position, made contact with Rivera. This resulted in Rivera hitting Co's car and pitching Miranda's car sideways. Rivera crashed into the left side wall, crumpling the hood of his race car. Miranda, struggling to keep the car straight, slammed hard into the right side wall with enough force to send his car into a front flip. His car eventually rested on top of the pit wall exit. Despite the spectacular crash, Miranda walked away from the incident unharmed. Bryan Co meanwhile snapped his axles from the incident and was forced to retire.

The incident scattered debris all over the main straight with marshals waving the red flad to clear the track. Inheriting the lead was Jette Calderon with Carlos Loinaz and series leader Andres Calma in second and third respectively. When racing resumed, Loinaz was in hot pursuit of Calderon. Loinaz made his move a few laps later by diving into the Porsche hairpin. Meanwhile, Calma was closing the gap between him and Calderon.

At the back of the field, Pauland Dumlao was making his way through the pack. Starting from 14th place, Dumlao charged his way into the top ten until contact slowed down his progress. Basti Escalante, drafting from Calma, found himself in fourth place. Calderon's car eventually began to fade in performance and fell into the clutches of Andres Calma and Basti Escalante. Calma and Escalante passed Calderon to secure second and third place.

With a clear track ahead, Calma kept posting quick lap times for him to catch up to Loinaz. Loinaz went into full defense, forcing Calma to take a wider, slower line. On the penultimate lap, Calma lunged for the lead when Loinaz hit the brakes early in one of the hairpins. Loinaz kept his cool as Calma overshot the turn, forcing the latter to yank the handbrake just not to end up in the grass. Loinaz soon breathed a sigh of relief as the move cost Calma valuable time.

Loinaz crossed the line first, getting his first win in Vios Cup, followed by Calma less than a second behind. Escalante meanwhile finished a comfortable third place. Completing the top five were Raymond Ronquillo in fourth and Jette Calderon in fifth. 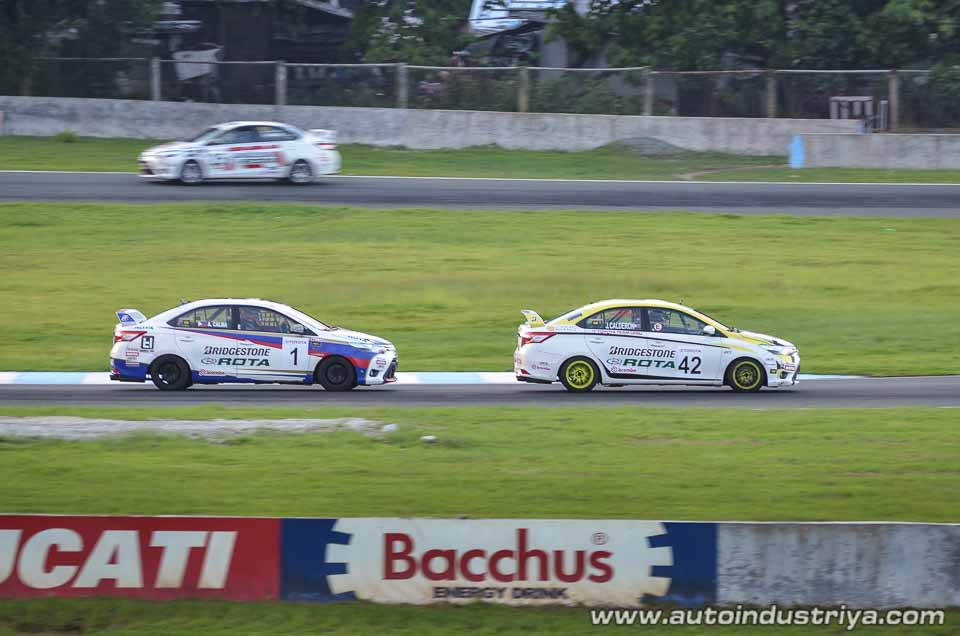 The second race would see a much cleaner start with Calderon off to a rocket start. By the first turn, Calderon would be behind Calma, challenging him for the lead. Loinaz meanwhile got shuffled in the first turn, losing the lead. With a lighter car, Calderon was able to match Calma's pace during the early half of the race.

Most in the Super Sporting class would retain their positions with Basti Escalante cruising in third place and Raymond Ronquillo in fourth. Dominic Ochoa meanwhile made a charge towards the top half of the field, passing other drivers lap after lap. Ochoa's team mate Allan Uy made contact with Pauland Dumlao, sending them both out of the top ten.

Halfway through the race, Calma hit the brakes early approaching one of the hairpins. This allowed Calderon to take the lead and would never look back. Calderon took the win for the second leg of the day, followed by Calma. Escalante and Ronquillo retain their first heat result by finishing third and fourth respectively and Ochoa's drive for the front of the pack netted a fifth place finish.

One of the biggest surprises in the second heat was Daniel Miranda. Just a few hours after the hard shunt that resulted in a front flip, he started at the back of the pack to finish sixth. 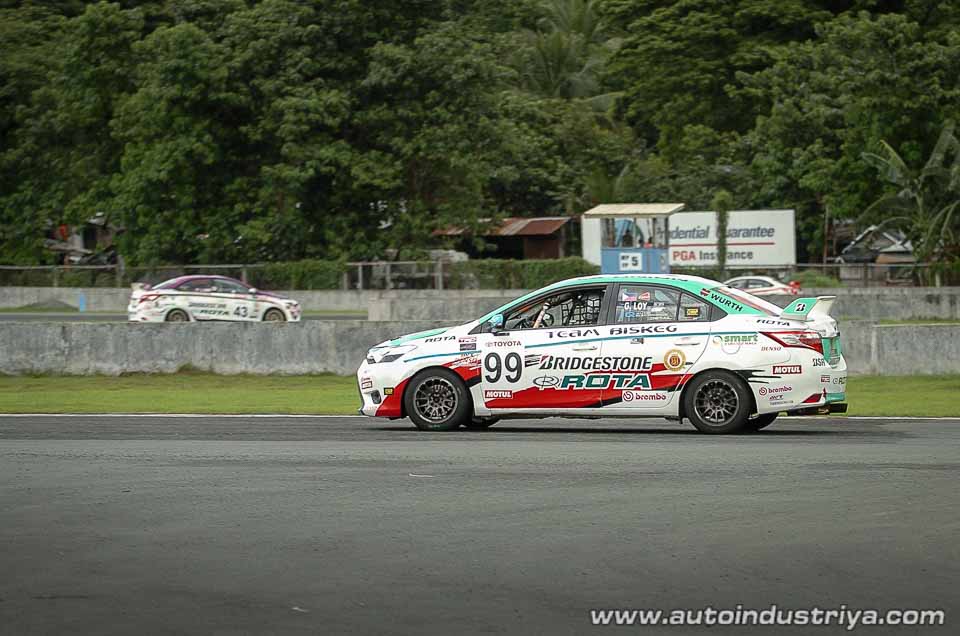 It may not have been as hectic as the super sporting class but the Sporting class provided wheel to wheel action to please the crowds. For qualifying, Gerard Loy posted the fastest time at 2:27.512, followed by Miguel Diaz with a time of 2:28:848. Miko Maristela meanwhile lapped Clark at 2:29.077.

The first race started with Miguel Diaz sticking to Gerard Loy's rear bumper thoughout the first lap. At the first turn, Miko Maristela came under pressure from the Toyota San Fernando duo of Ton Ramos and Steve Bicknell. Bicknell got shuffled in the pack and overtaking him were Sam YG and Ben Grimes as Ton Ramos continued to pile on the pressure on Maristela.

For a big part of the race, it was Maristela, Ramos and Sam YG running nose to tail for third place. This gave both Loy and Diaz a clear race track, separating themselves from the rest of the pack. Loy capitalized on running with no weight ballast, gaining a significant lead from Diaz. Sam YG then dove in the inside of Ramos and, a few laps later, took third place from Maristela. With a car suffering from fading performance, Maristela was eventually overtaken by Ramos with Ben Grimes in tow.

Phoemela Baranda had a rough outing, making contact and losing bumpers in the process. She decided to park the car for the rest of the race to be able to run the second heat.

Winning the first heat was Gerard Loy with a comfortable 12 second lead over Diaz in second place. Sam YG jumped three spots to finish third. Ton Ramos got his first top-five finish by finishing fourth and rounding up the top five was Ben Grimes. 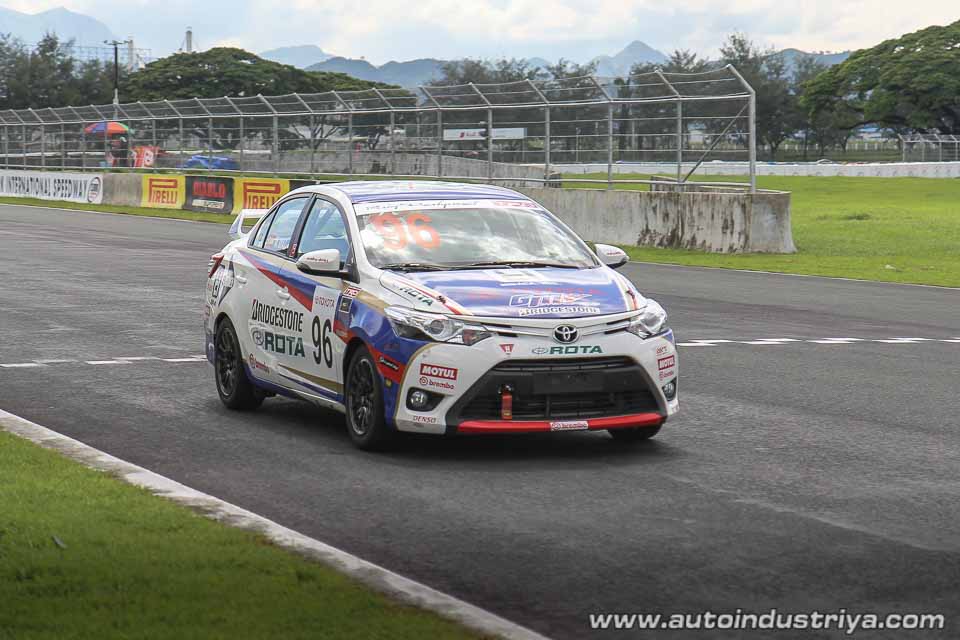 The second race for the Sporting class also saw a lot of positions shuffled between the drivers. Last year's promotional class champion Miguel Diaz timed his launch just right, placing him in front of Loy while Ton Ramos and Sam YG were battling for third.

From the back of the field, Miko Maristela charged to the front, and was the front runners for a top 3 spot. Ton Ramos was able to overtake Sam YG for third but lost it when he ran wide at the bottom of the corkscrew, letting Sam YG, Maristela, Loy, Ben Grimes and Steve Bicknell through. A lap later, one of the racers made contact with Sam YG, pitching his car sideways but was able to regain control.

All the fighting for position allowed Diaz to run away from the pack, handing him a healthy margin for the lead. At the back of the pack, it was Jeje Villena and former TMP president Michinobu Sugata fighting for sixteenth place. Villena kept his distance from the former TMP president but Sugata ran wide and attempted to get back on the racing line. Sugata's move sent him straight into Villena's fender and out of the race.

Maristela continued his drive to the front, capitalizing on the near-spin Sam YG had. Maristela was posting faster lap times than Diaz but ran out of time to mount a challenge to Diaz. Diaz won the race and second went to Maristela. Third went to first heat winner Loy with Ben Grimes and Steve Bicknell finishing in the top five. 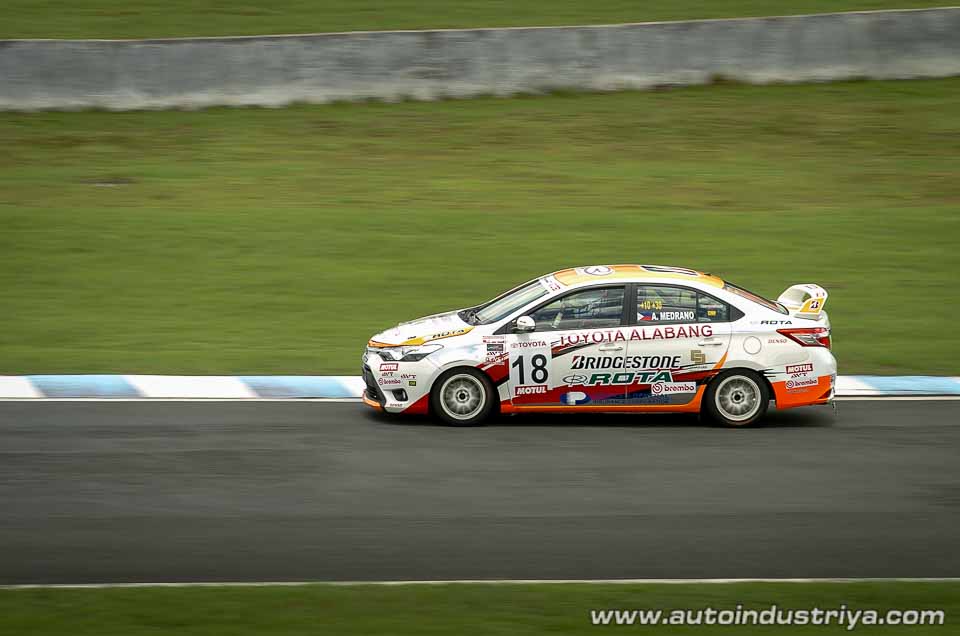 On launch, Medrano bogged down, handing the lead to Matias as the Alabang round winner soon found herself outside the top five. Oscar Suarez also had a good start, putting him in contention for the lead. Marc Martinez also jumped several positions to enter the top five. Bunag meanwhile got shuffled out of the top three and would never recover.

As Oscar Suarez and Marc Martinez battled for second place, Medrano was on her way to a reovery drive, overtaking Red Diwa and Kiko Dysico for fourth place. Medrano caught out Martinez first to grab third, followed by Suarez a lap later for second. Matias did his best to keep the lead but Medrano found a tighter line and went for the gap Matias left for her.

Positions would remain unchanged throughout the race with Medrano finishing first, followed by Matias in second and Suarez in third. Marc Martinez and Red Diwa complete the top five.

Meanwhile at the Celebrity class, the first turn shuffle handed Fabio Ide the class lead as Jinno Rufino had to deal with traffic. Joyce Pring would keep her third place throughout the race while Arci Munoz beached her car on the sand trap after running wide. 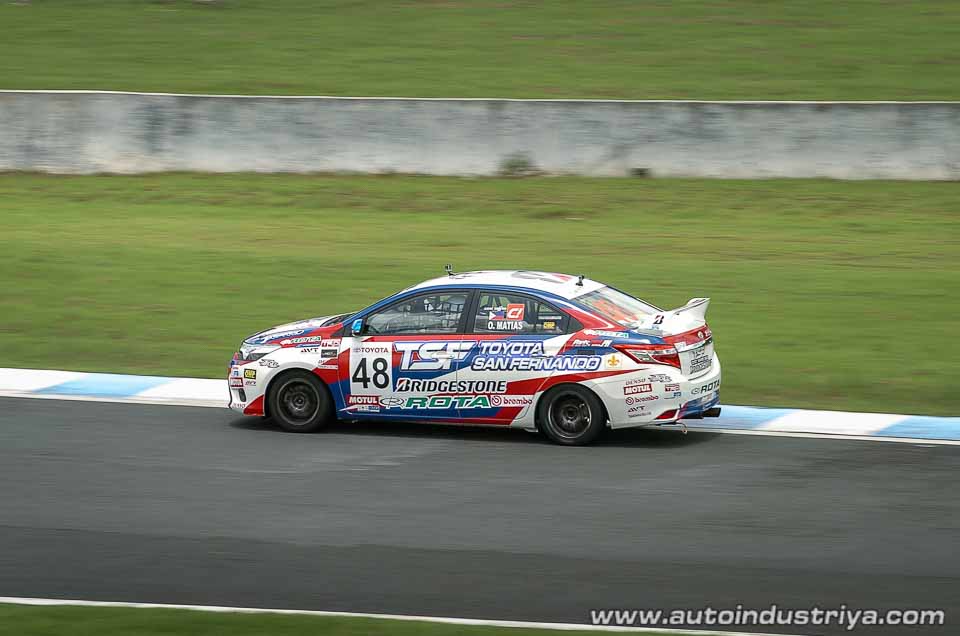 The second heat saw tense start for both Matias and Medrano with the entire field breathing down their rear bumpers. Medrano ran wide in the first turn and lost several places in the process. Not wanting a repear of the first heat, Matias ran consecutive fast laps as he tried to distance himself from the pack. He built up a margin big enough for a comfortable lead.

Medrano continued to charge up the field and was in the middle of a second place battle among Suarez, Martinez and Diwa. The four would continue to battle it out during the first half of the race with Matias extending his lead further. Medrano was able to make her way through and was now chasing Matias.

Further back, Dimples Napat lost control of her car at the final corner. Jinno Rufino and Evelyn Coseteng had to make evasive maneuvers but Coseteng still ran into the front of Napat's car. Napat's car was still rolling towards the corner exit, just as Joyce Pring was charging in at a high rate of speed. Pring tried her best to avoid the disabled car but clipped it with her fender, turning Napat's Vios into a Yaris. Fabio Ide was able to take the lead for the celebrity class away from Rufino as the latter avoided the spinning car of Napat.

Following the incident, the safety car was brought out to clear the track and bunched the field together again. When racing resumed, Matais made a clean getaway with Medrano close by. Carrying success ballast, Medrano was unable to catch up to Matias and the shortened race was a relief for the Toyota San Fernando driver. Matias bags his first win with Medrano in second and Red Diwa in third. Oscar Suarez finished fourth and Marc Martinez scores another top five finish. 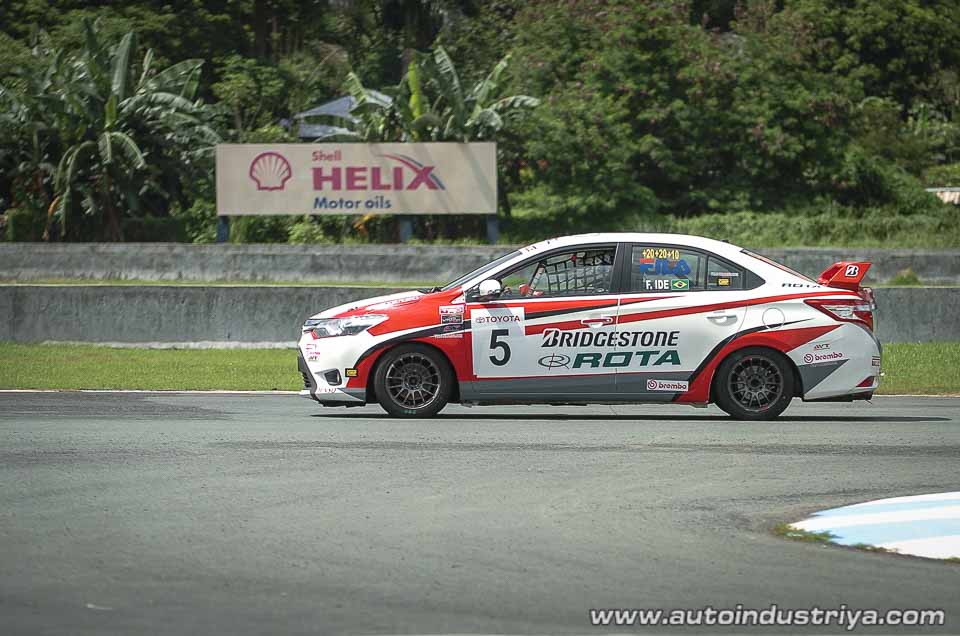 Variety was the theme of this round of Vios cup with five new drivers joining the elite group of race winners. All the drivers put on a good show with close racing and daring maneuvers. With the final round coming soon, racing will be more heated than ever as the drivers make one last dash to claim the championship in their respective classes.