In a rather uncharacteristic manner, Audi WRT driver Laurens Vanthoor found himself on top of the podium after sending his R8 LMS Ultra airborne on the Melco bend and ended upside down. He emerged unhurt as officials put a stop to the GT race in the middle of the 5th lap after 2 restarts due to several accidents that led to big crashes. 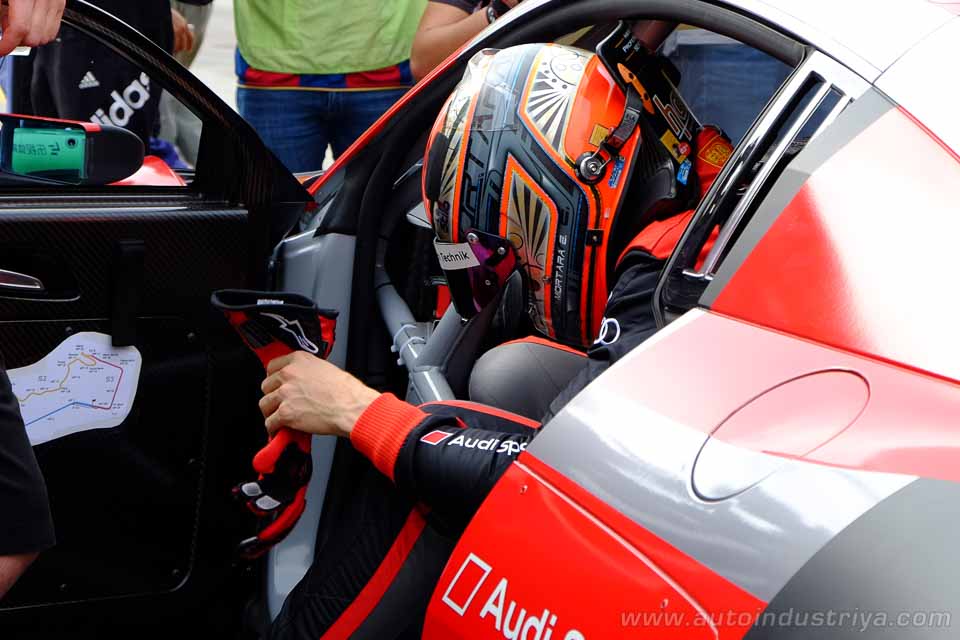 It seemed like a good weekend for Italian Audi WRT driver Edoardo 'Mr. Macau’ Mortara who clocked in the best time on Friday qualifying to capture pole position. Mortara is the only competitor to have scored multiple wins in the Macau GP for both the GT and F3 classes earning him the nickname. 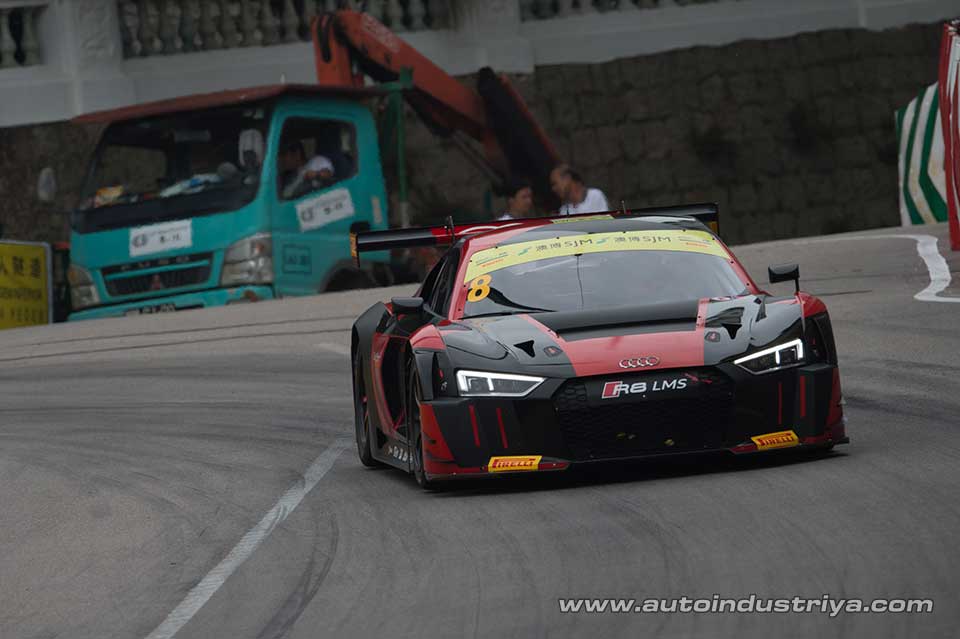 However, lady luck soon shifted her favor as Mortara would suffer a crash early during the Qualification Race despite a strong front row start alongside teammate Vanthoor. The Belgian would later find himself having to fend off the charging Porsche 911 GT3R’s of Manthey Racing drivers Earl Bamber and Kevin Estre with AMG GT3 drivers Maro Engle and Renger van der Zande not too far behind. An unfortunate crash by Nico Muller would however bring out the Safety Car on the next lap.

The race would resume again on the lap 5 as Vanthoor gets away cleanly in front. However, another incident at the R bend between John Shen and Philip Ma would once again bring out the safety car and momentarily suspend the race.

On the second restart, a hard-pressing Bamber would actually make good on his attack as he closed in on Vanthoor’s slipstream on the run down to Mandarin bend, but the Kiwi driver would lose a bit of momentum through the right hander, this gave the Belgian a chance to build a wider margin which he held until the end.

Despite his team managing to get the car back into the race, Mortara’s luck seemed to run out as a last lap brush with the wall sent his car colliding with Darryl O’Young at Maternity Bend resulting in a dismal 13th place, virtually erasing his hopes of a competitive race day. 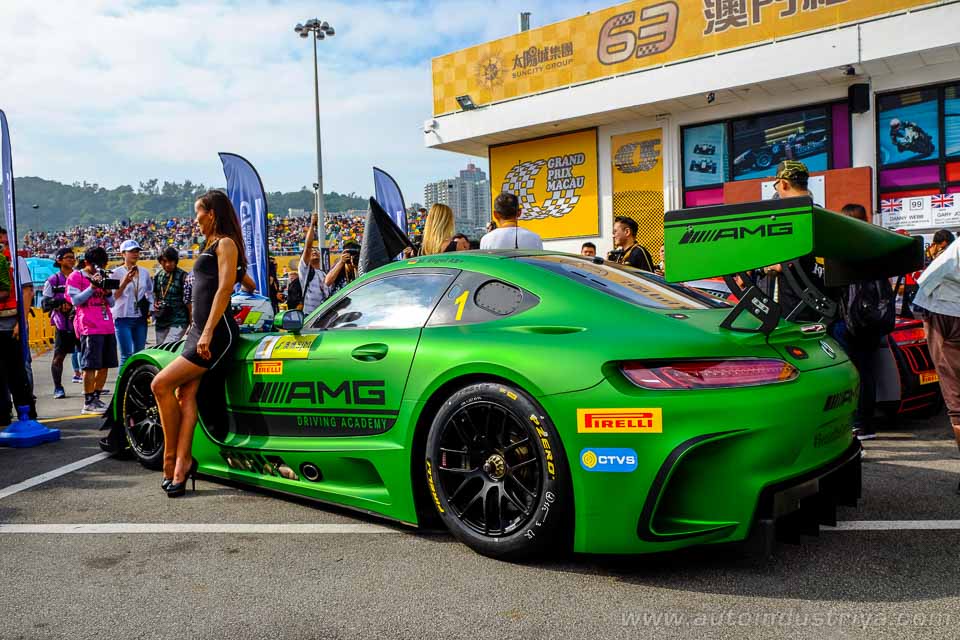 The finishing order was: Vanthoor, Bamber and Estre with the Mercedes-AMG drivers in tow. 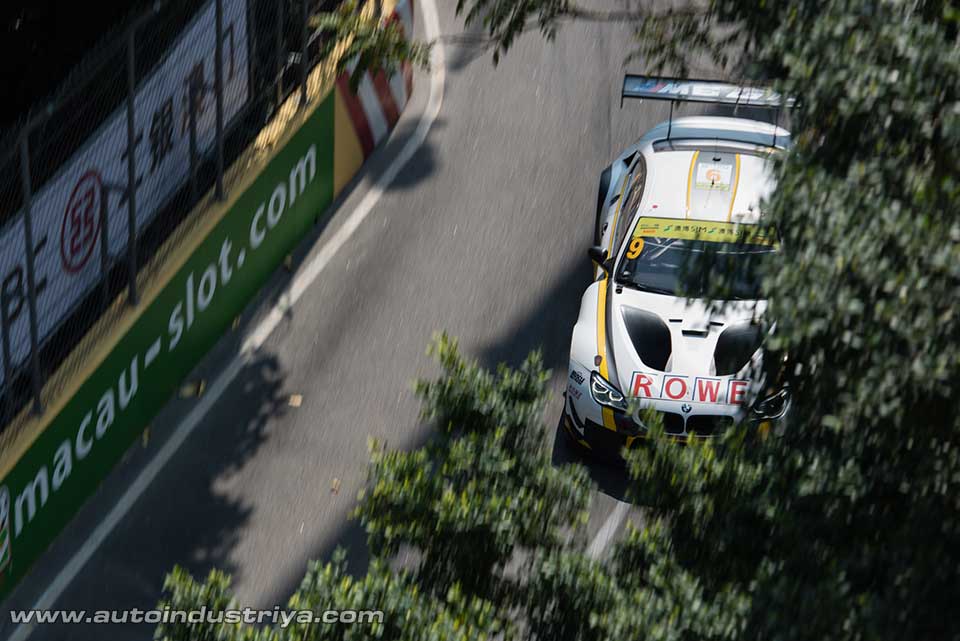 The FIA GT World Cup race was off to an exciting start, the drivers all fired up to make good on the their performances with the event having debuted only at the 2015 Macau Grand Prix.  However, the opening lap seemed to started wrong as Aussie driver Ricky Capo crashed his BMW Z4 hard into the barriers on Fisherman’s bend. Race control decides to red flag the race after a lap under the safety car, sending all cars to the pitlane. While helping recover the damaged car, a marshal also gets injured, requiring an ambulance. 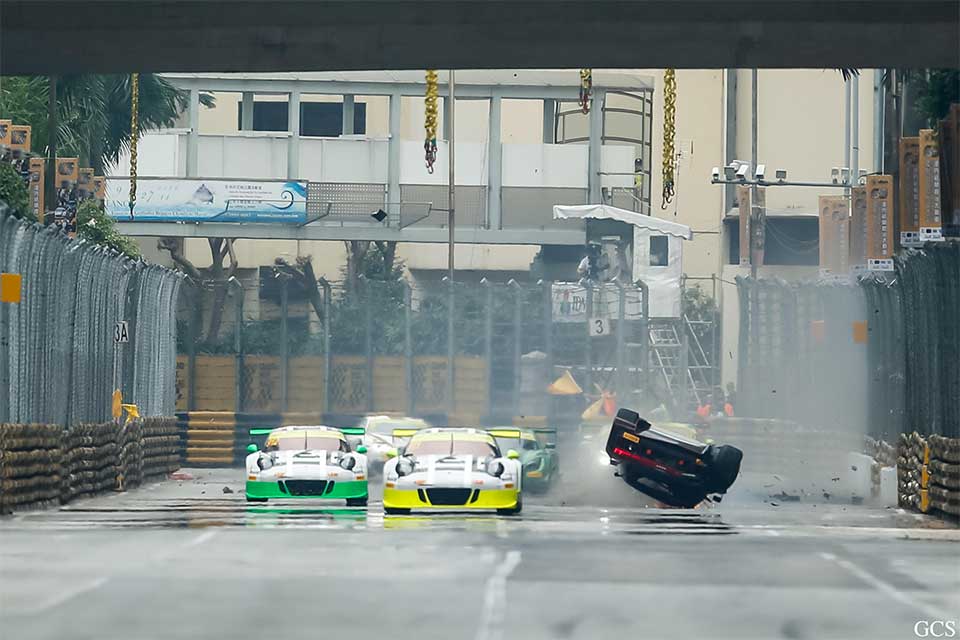 The race would eventually restart nearly an hour later under safety car, once the green flag gets waved, the action resumes with Earl Bamber putting all the pressure on Vanthoor eventually catching on the slipstream on the run down to Mandarin for the lead. However, a miscalculation by Vanthoor sent his car into the wall at the exit of Mandarin which caused it to ultimately flip. Race control decided to stop the race, as it would take too long to extract the car and clean the debris with race having been restarted with only 15 minutes left on the clock. 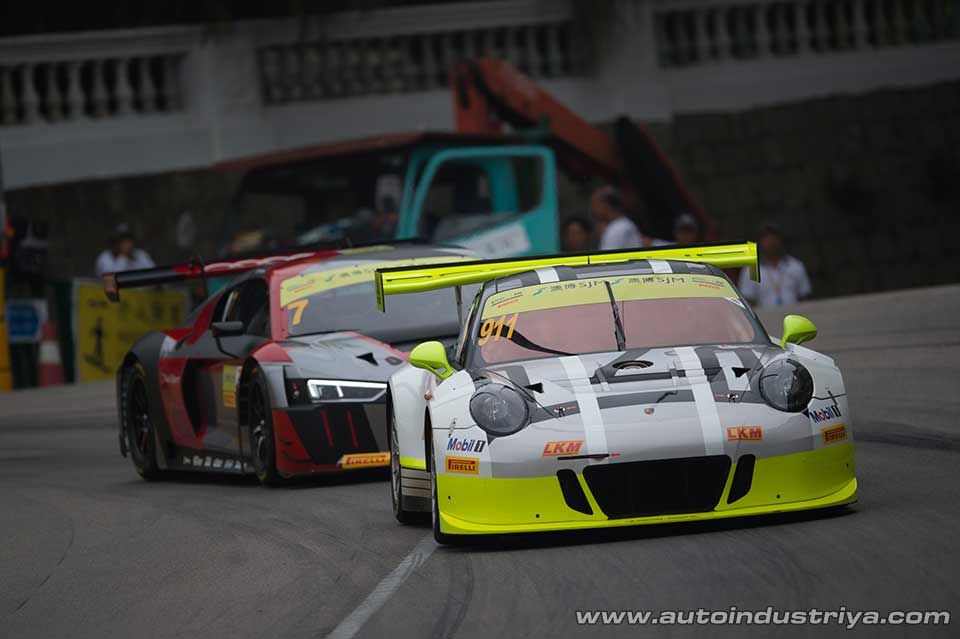 A rulebook technicality which counts back to the race order on the prior lap completed awarded the awkward win to Vanthoor. An earlier 5-second penalty imposed on Bamber for forcing Maro Engel to clip the barrier at the Reservoir Kink. The penalty would be enough to promote both Porsche-Manthey Racing teammate Estre and defending champion Engel to second and third, respectiveely.