The 10th season of the Hyundai Lateral Drift Championship (HLD) Series will kick off on March 21, 2015 and will take place at the Cultural Center of the Philippines Complex (CCP) in Pasay City.

Last year's judge Jason Choachuy will now be up against other pro drivers including back-to-back HLD Champion Gio Rodriguez of Team A-toy Customs. Taking Choachuy's place as judge will be long-time drift instructor Paolo Arespacochaga while six-time drift champion Alex Perez will be acting as this year's Race Director. 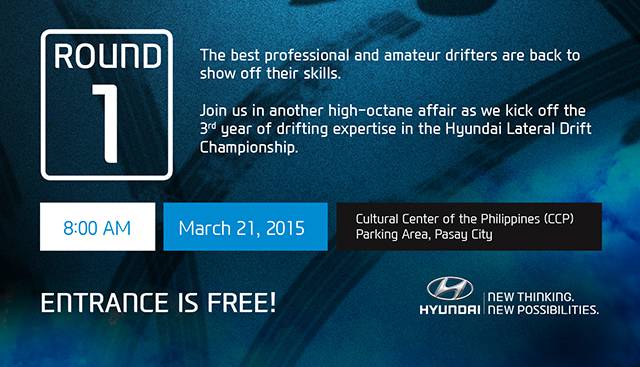 The March 21 event will be Round 1 of 6 as Round 2 will happen on April 18 in the new Tarlac Race Park in Tarlac City while Round 3 will be held on May 23 at the Philippine Sports Arena in Bulacan.

Rounds 4 and 5 will take place on June 20 and July 18 respectively but Lateral Drift Productions have not yet stated on where it will be held. Round 6 on the other hand has no definite date and venue yet.

Metro Manila roads, areas you should avoid during the 2017 ASEAN Summit