Porsche has just revealed its latest GT race car which follows the footsteps of the 911 GT3 RSR. The 911 RSR race car now enjoys an 'optimized' version of the 460hp 4.0-liter six-cylinder boxer engine from its predecessor and is mated to a six-speed lightened racing gearbox. Just like the production versions of the 991, its wheelbase is longer by 10cm and features a new wishbone front suspension system which replaced the previously used McPherson struts.

The 911 RS will serve as the company's race car for several international racing events like the World Endurance Championship (WEC) and the Le Mans 24 Hours. To make way for easier maintenance and repair during endurance races, Porsche used front end, front lid and rear body panels that are fitted with quick release systems as part of its 'quick-change' concept for its body parts. 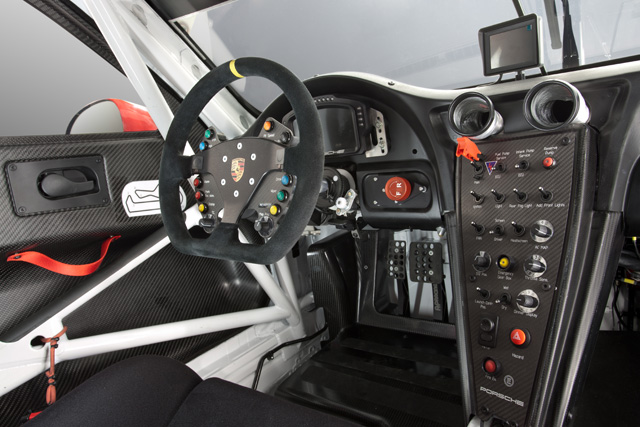 For the 911 RSR, Porsche prioritized better balance of the car and concentrated on evenly distributing the car's weight and lowering its center of gravity at the same time. Carbon fiber, light polycarbonate, and lithium-ion batteries has helped the company to further reduce the car's weight.

To commemorate the 911's 50th anniversary, the numbers '911' and '50' are displayed on the top of the car that can be appreciated when viewed from above. Aside from the bonnet and roof, the numbers can be noticed on the car's door and rear side as well.

Competing in the Porsche 911 RSR with starting number 92 are Porsche works drivers Marc Lieb (Germany) and Richard Lietz (Austria), who already shared a cockpit in the 2012 WEC. At the first two races of the season in Silverstone (14.4) and Spa (4.5) as well as at the 24 Hours of Le Mans (22.6), they receive support from their works driver colleague Romain Dumas (France). Factory pilots also drive the #91 sister car, with Joerg Bergmeister (Germany) and Patrick Pilet (France) making up a team. In Silverstone, Spa and Le Mans, the duo is joined by Timo Bernhard (Germany).

FIA WTCC: Yvan Muller gets back to back victory

Yvan Muller manages to give his RML team a good start for the 2013 FIA World Touring Car Championship Season.

Peugeot to Race to the Clouds with the 208 T16 Pikes Peak and Sebastien Loeb.