Lopez now has a 60-point lead in the standings

Argentine racer Jose Maria Lopez dominated in his homeland aboard his Citroen C-Elysée after qualifying in pole position and winning rounds 15 and 16 of the FIA World Touring Car Championship (WTCC) held at the Termas de Rio Hondo.

During the first qualifying round, Lopez managed a time of 1:44.795, just behind of Michelisz who had the best lap of 1:44.696. Those that advanced for the 2nd qualifying were Lopez, Michelisz, Muller, Monteiro, Tarquini, Bennani, Chilton, Munnich, Cornonel, Huff, and Valante.

At the second qualifying round, Lopez beat Michelisz's time and achieved a commanding time of 1:43.813, placing him at first place. It was during the 3rd qualifying round where Lopez achieved his best lap of 1:43.766, granting him the coveted pole position in the race. 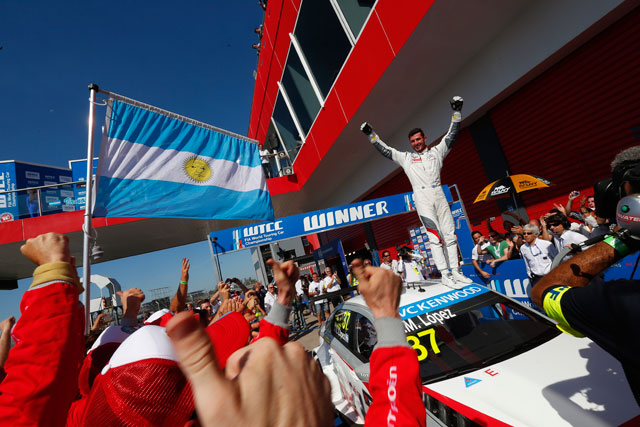 Lopez dominated the round 15 after having a flawless start from pole position up to the checkered flag. Finishing second was Michelisz, who managed to maintain his position from Muller, Loeb and Monteiro.

In round 16, Lopez had to fight for top position as he got stuck with the group. After 8 laps, the Argentine racer managed to take the lead from LADA's Rob Huff who finished in second. Huff's performance gave the Russian automaker its first podium finish in the WTCC. Muller once again finished in third ahead of Tarquini and Monteiro.

Lopez's double victory in Argentina makes him the first driver this year to win both races in the same weekend. The race grants him his seventh personal win this season and also gives him a 60-point lead in the standings.

The 2014 FIA WTCC will have a two-month break before resuming at Beijing's Goldenport Park in China on October 5 for rounds 17 and 18.