Automobili Lamborghini has finally revealed the Huracan GT3 at its headquarters in Sant'Agata Bolognese, Italy. The new GT3 racecar will compete in this year's Blancpain Endurance Series which will take place on 5 venues, including the Spa-Francorchamps 24-hour race in Belgium.

"With the Huracán GT3, Lamborghini Squadra Corse takes a further step forward in the development and production of a race car for this category, which is among the most prestigious and challenging in international motorsport. Lamborghini is thus for the first time directly involved in GT motorsport activities with the in-house development of this new model. We are proud and delighted to announce the new partnership with PERTAMINA, which will further support our motorsport activities," said Stephan Winkelmann, President and CEO of Automobili Lamborghini.

The Huracan GT3 makes use of an aluminum-carbon fiber chassis and has been fitted with a fully-integrated FIA roll cage. Both the front and rear subframes have been modified in order to house a high performance radiator and a better positioning of the gearbox. The curb weight of the Huracan GT3 is at 1,239 kg with a 42/58 weight distribution. The final weight of the GT3 racecar will be set by FIA's Balance of Performance.

The bodywork is made up of composite materials while aerodynamics was developed in collaboration with Dallara Engineering with direct involvement of the company founder Gian Paolo Dallara. The Huracan GT3 now has an adjustable rear wing, front diffuser and louvres which not only provides better traction and air flow, but also improved the cooling of the braking system. 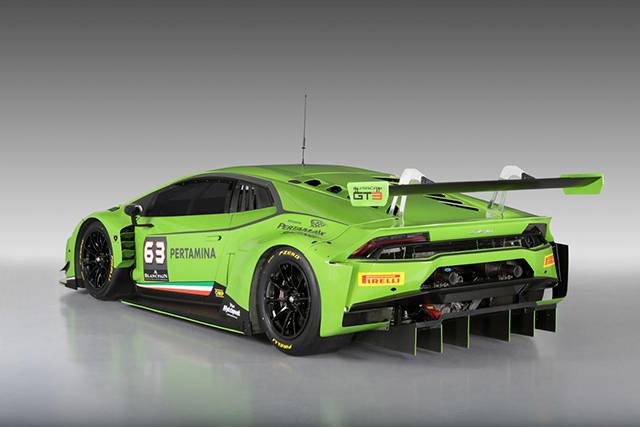 Official power output of the Lamborghini Huracan GT3 has not yet been revealed by the company, but Lamborghini did say it uses the production 5.2-liter V10 engine found on road cars. The company also added that it has a Bosch Motorsport control unit that manages the car's traction control, gearbox and TFT display on the dashboard. The engine is fixed on the chassis with rigid mountings and is paired with a 6-speed gearbox with a three-disc racing clutch that powers the rear wheels.

The braking system consist of steel disc rotors that measure 15-inches at the front and 14-inches at the back. In following with FIA regulation, the brakes use a Bosch ABS system that have 12 different settings that can be altered via sterling-wheel mounted controls.

Hyundai gives virtual tour of i20 WRC with new app