Set to compete in the Full Size Stock Class

Toyota Racing Development (TRD) will put the Tundra TRD Pro to its paces, as it will join the 47th Tecate SCORE Baja 1000 that will run from November 12-16, 2014 at Ensenada, Mexico.

The Tundra will compete in the Full Size Stock Class and includes slight modifications like auxiliary lights and a roll cage. 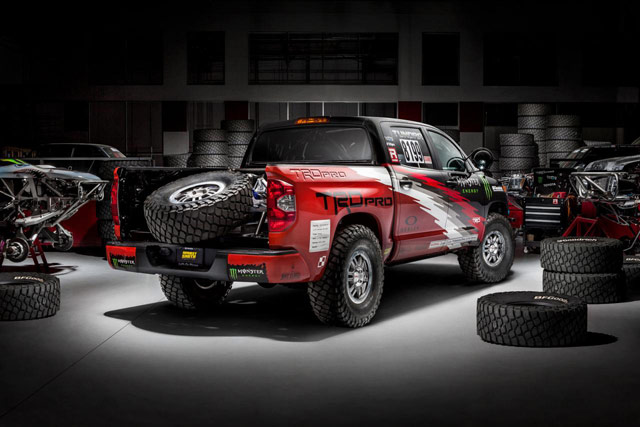 "Competing in the Full Size Stock class allows our team to test the Tundra TRD Pro as close to stock as possible and showcase its strength and durability in the Mexican desert’s treacherous terrain. Our goal is to finish this grueling race and to showcase just how awesome the new TRD Pro Series trucks are", said Andrew Franceschini, Toyota Truck Marketing and National Manager

Taking the role as team coach will be Ivan "Ironman" Stewart, a Toyota Off-Road racing legend and Baja veteran. Acting as navigator for the team will be Mike Sweers, Chief Engineer of Toyota Trucks. Four designated drivers were chosen for the race; they are Andy Bell, a Toyota athlete and Baja 500 champion, Jamie Bestwick, a 9-time winner of the X-Games, Ryan Millen, the son of off-road legend Rod Millen, and Ted Moncure, a TRD Design Engineer and a Baja 1000 and 500 class champion.

The Toyota Tundra TRD Pro made its debut last February at the 2014 Chicago Auto Show.

Bernie Ecclestone is a free man after charges against him were dropped following a $100-million agreement.

Pechito Lopez's double victory in Argentina makes him the first driver this year to win both races in the same weekend.