The former Gazoo Racing driver Akio Toyoda let himself have a go behind the wheel of the red Toyota 86 during a private test drive near the Tommi Makinen Racing Headquarters. Afterwards, Makinen himself drove the car at the Kakaristo special stage (SS7) with Akio Toyoda as co-pilot.

Speculations arose that the Japanese automaker was trying to make a comeback at the WRC after they left the competition in 1999 where they won four drivers’ and three manufacturers’ titles. 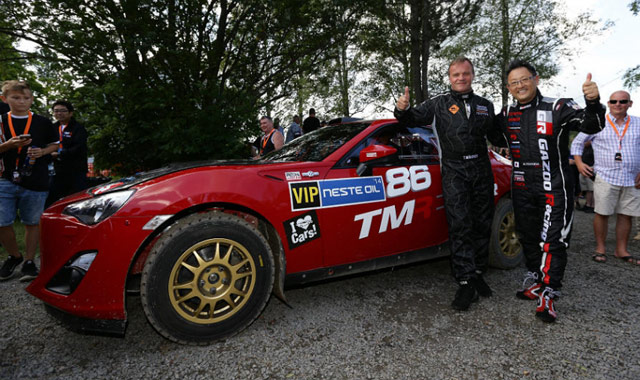 When asked whether they’ll return to rallying, the CEO simply said “Please look at our activities in the future.”

“I came here to learn about WRC but what I found out is that Toyota’s DNA of rally is really, really a lot to me. As a top guy of the company I want to continue that kind of legend, but Toyota is a big company and nobody listens to the president! So I have to show everyone that Toyota needs rally to make ever-better cars. The main objective it to make car fans and make ever-better cars,” Toyoda said.

No details were released about the red GT86 except that it runs on an all-wheel drive system.

Maristela recorded a best time of 1.50.840 at the Batangas Racing Circuit during the sixth leg of the Circuit Showdown series.

Bernie Ecclestone is a free man after charges against him were dropped following a $100-million agreement.