Peugeot is making a comeback at Dakar after 25 years of absence with the 2008 DKR car.

Peugeot, Red Bull and Total have decided to join forces for the 2015 Dakar Rally. With this, the team unleashed the Peugeot 2008 DKR car, which will challenge the rough roads of Dakar Rally next year. The vehicle is also scheduled to make its world debut at the 2014 Beijing Motor Show.

The design of the 2008 DKR was developed at the automaker’s Style Center and their partners in Peugeot Sport’s Design Development.

“We provided Peugeot’s Style Centre with a very precise brief. We supplied them with the basic key dimensions, as well as other information such as the cabin space we required, plus the wheel size and the suspension travel. They also had aerodynamic data resulting from our early simulation work,” said Jean-Christophe Pailler, Project Leader at Peugeot Sport. 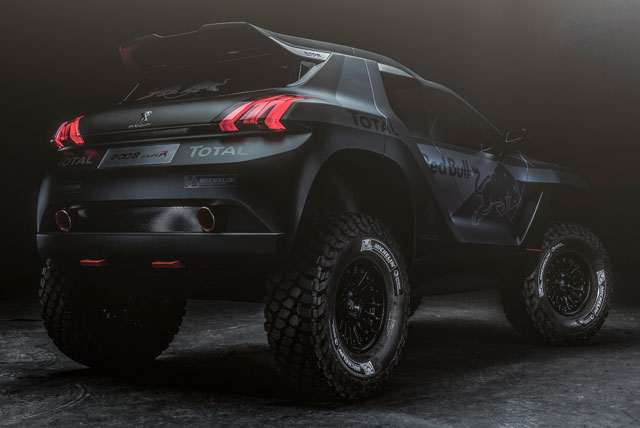 The exterior of the vehicle takes its design cues from the Peugeot 2008 model. It was then incorporated with a muscular design that indicates the car’s serious desire for success. The French automaker says the 2008 DKR features an “aggressive stance dictated by the technical constraints associated with its mission.”

The Peugeot 2008 DKR doesn’t have rear doors, but has a large rear wing. It is equipped with a 37-inch off-road Michelin tires and has a very short front overhang.

Details regarding what will power the Peugeot 2008 DKR have not yet been released, but the vehicle will have a two-wheel drive layout.

Watch the video to see the past rally contenders of the French automaker as well as the Peugeot 2008 DKR.

Inside Beijing with Foton