Casio Edifice celebrates with Vettel in his third F1 title

At the conclusion of the 2012 F1 season, Sebastian Vettel has put himself into Formula One history books as the youngest Triple World Champion. He finished sixth place in the recently concluded Brazilian Grand Prix to allowing him to stay ahead of rival Fernando Alonso by 3 points. Vettel is also the youngest F1 driver to win three championships in a row.

Vettel's third championship definitely wasn't a walk in the park, by starting at the fourth grid, he suffered a first-corner collision with Bruno Senna that left his car damaged making leaving him far off the pack. The defending champion didn't give up and muscled his way through the rest of the drivers managing to get hold of the sixth place, making it enough for him to win the title.

Not only did Vettel won himself the driver's title, but was also responsible for the Red Bull Racing Team's third consecutive Constructor's Championship title as well, achieving a triple double World Championship.

As a way of celebrating with the Red Bull Formula One Team, Casio Edifice customers will get free Red Bull Limited Edition items when they buy a watch from December 1 to 31, 2012 or until supplies last. Promo details can be seen below.

You also have a chance to win some of these exciting prizes through our online giveaway. See further below for our no purchase necessary giveaway. 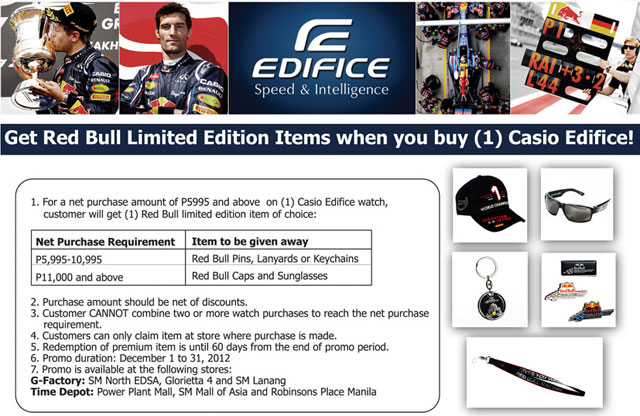 Michelin celebrates 25 years of partnership with Race of Champions

Isuzu to join Dakar with the all-new D-Max

While we are all still waiting for the all-new Isuzu D-Max in our side of the globe, Isuzu has built its most powerful D-Max yet to take on one of the most grueling races on earth, the Dakar Rally, which is set to start January next year.

AutoIndustriya.com's The Fathers of Motoring Contest

Casio's lastest watch is a collaboration with Honda Racing

Toyota celebrates 30 years in the Philippines

The Winners of the AutoIndustriya.com Fathers of Motoring Contest

Ford is bringing back the Mustang Mach 1

2021 Mach1 to be the most track-capable Ford Mustang