The 'metamorphosis' of the DKR in preparation for the 2015 Dakar

Peugeot recently made public the official livery of the 2008 DKR that will compete in the 2015 Dakar Rally that will commence on January 4, 2015. The official colors according to Peugeot is the 'metamorphosis' of the DKR prior to the “most punishing cross-country rally of them all”.

The French automaker covered the body with a racier livery that consist of blue, white and red colors and is accompanied by sponsored brands such as Total, Michelin, Sparco and Red Bull were also placed on the body.

Two of the designated drivers, Cyril Depres and Stephane Peterhansel, both liked the new livery that was applied to the DKR. Depres said that the car now looks more aggressive looking like that since he himself is accustomed on seeing stylish colors on the body work. Peterhansel on the other hand admired that the cockpit has been painted in white since the lighter color will protect the cabin from the heat. Peterhansel himself has drove in a rally car with a black roof and simply said that the white color makes a big difference. 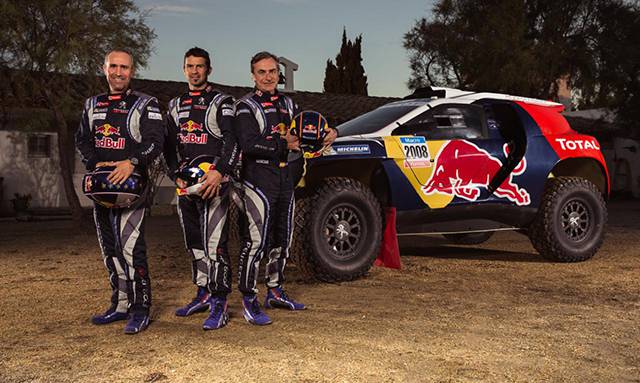 World Rally Championship (WRC) veteran Carlos Sainz is the last of the drivers that will be with Depres and Peterhansel for the 2015 Dakar. He did not state his comments about the car's livery but admired the car's unique and innovative versatility. Sainz also added that it is reliable and fast but also stated that since the car is still at an early stage, it is difficult to be 100% sure if it will be able to take on the harsh terrain.

In review, powering the 2008 DKR is twin-turbo diesel V6 that puts out 345 PS and is connected to a transmission that drives the rear wheels. Its other features include an adjustable tire pressure system and a long travel suspension system that has a 460mm ground clearance instead of the usual 250mm.

With just 48 days left before the start of the 2015 Dakar, the service trucks carrying all the necessary equipment and spares will have to be loaded onto ships bound to Argentina. The 3 DKR rally cars will then have to airfreighted after one final test in Morocco while the crew will have to undergo an intensive mechanical training in order for them to be prepared should a problem arise.