By 2017, touring car races with identical regulations will be run across three continents. DTM in Europe, Super GT in Japan and a new US-based series under GRAND-AM aims to unify touring car races on a global scale. This was announced after a recent meeting in Nuremberg between the countries’ respective motorsport federations, series promoters and car manufacturers (Audi, BMW, Honda, Mercedes-Benz, Nissan and Toyota).

The meeting was hosted by Hans Werner Aufrecht, chairman of DTM rights holder and promoter ITR e.V.  A new Steering Committee was formed to take care of maintenance and the joint development of regulations for the collaborative effort. The committee plans to meet at least every six months. 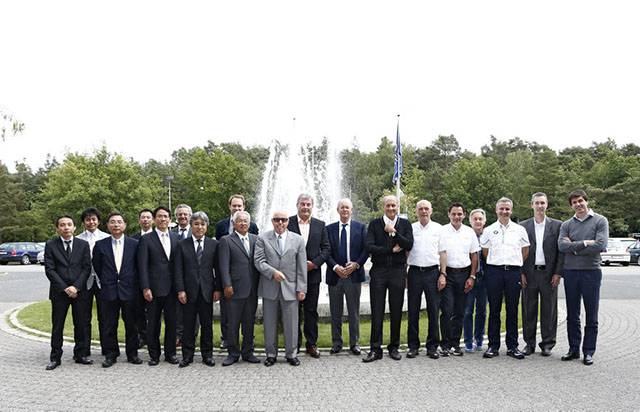 “We have agreed upon the goal that in 2017, all manufacturers will be racing to absolutely identical regulations. That is a very important step. Moreover, we agreed that the Steering Committee will be governing the regulations and developing them in this spirit”, said Aufrecht.

DTM and Super GT already signed a joint agreement in October of 2012 for a common-spec technical regulations starting 2014 until 2017. ITR e.V. with GRAND-AM and the US motorsport federation International Motor Sports Association inked a licensing and co-operation agreement in March of 2013. The Steering Committee further cements the road towards joint regulations in 2017 by defining a clear road map.

“We are very happy that we are able to start a new chapter in the history of motorsport with this first step,” said Masaaki Bandoh, chairman of Super GT promoter, GT Association.

“Development of the cars from Honda, Nissan and Toyota is to be finalised by the end of this month. For the fifth Super GT round in Suzuka on August 16th, we have planned to put all the cars on display and show them to the media and the fans,” added Bandoh.

“In the new United SportsCar Racing series, we have some great tracks like Daytona, Sebring or the Circuit of the Americas in Austin. We will be racing at some great tracks,” said Ed Bennett, president of GRAND-AM.

“We have planned to have a rotation between our three regions. Accordingly, the next meeting will be held in the USA at the occasion of the Daytona 24 Hours at the end of January, 2014,” Bennett said.

The following meeting is planned to be held at the 1,000 kilometer race in Suzuka.

“Of course, there also were different opinions in our first meeting. However, we have the same goal and we try to find solutions for detailed questions. The Technical Working Group will be assist the Steering Committee and will be made up of technicians who will find these solutions,” said Dr. Gerd Ennser, board member automobiles of the Deutsche Motor Sport Bund (DMSB).

The common-spec regulations aim to lower costs and increase the global audience of the different series.

“With the new regulations, we have the great chance to achieve a cost reduction and the possibility to put our Japanese races on a global platform,” said Yoshiki Hiyama, secretary general of the Japanese Automobile Federation (JAF).

Lexus has announced that it will be campaigning with the new LF-CC based car for the 2014 Super GT series.