This year's Azerbaijan Grand Prix is another one for the books. This year's race saw a chaotic start, various pit strategies, team mates running into each other and drama in the final laps. When the dust and debris settled, it would be Lewis Hamilton standing at the top of the podium, his first win in the 2018 season.

Initially, it was Vettel who had a great start and appeared poised for a lights to flag victory. However, incidents happened as early as the first lap. In turn three, Esteban Ocon and Kimi Raikkonen crashed into each other with Ocon coming off worse. The Force India driver clipped the front tire of the Ferrari which sent him straight into the foam barrier. Raikkonen, on the other hand, suffered heavy damage on his car's nose, forcing him into the pits. 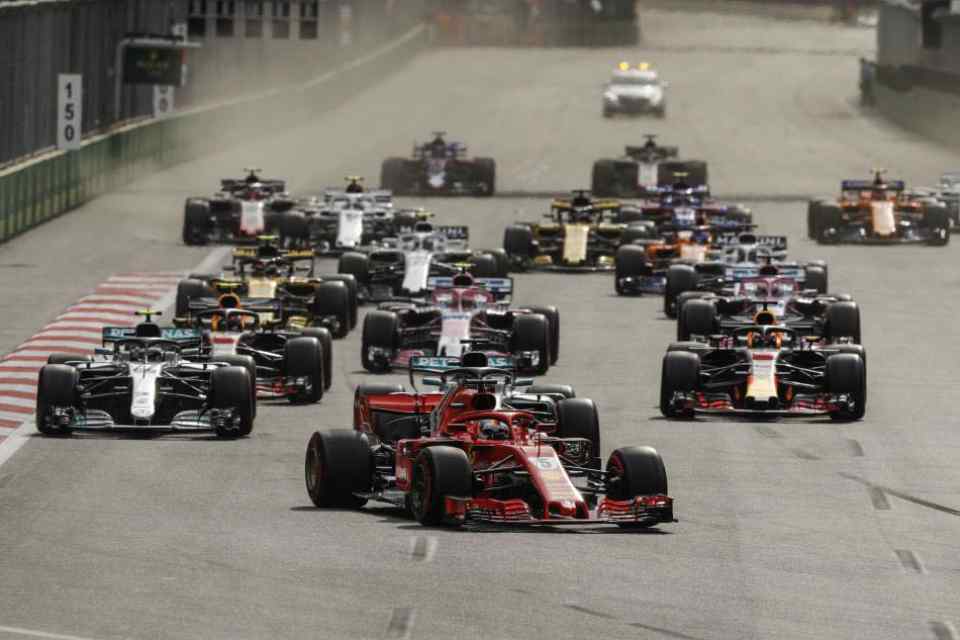 Besides Ocon and Raikkonen getting into each other, there was also a big accident involving Niko Hulkenberg, Sergey Sirotkin and Fernando Alonso. Hulkenberg cut in front of Sirotkin a little to early, which then forced Sirotkin into Alonso's car. The impact left Alonso with both right side tires flat and Sirotkin with a broken left side suspension. These crashes brought out the safety car with drivers scrambling into the pits to repair damage. 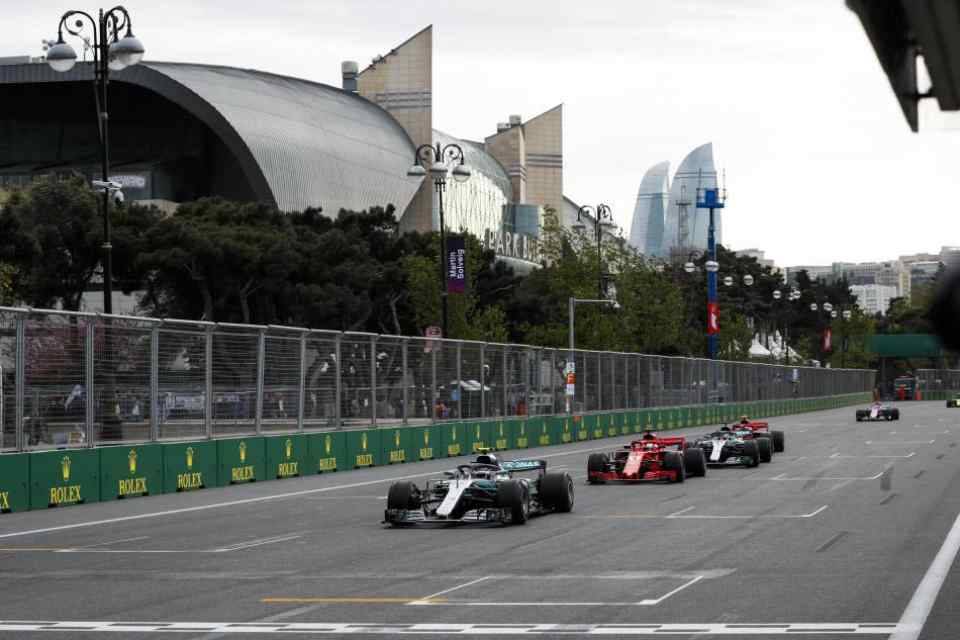 Racing resumed on the fifth lap and, again, Vettel made a clean getaway. There was a fight brewing just outside the podium places, involving the Red Bulls of Max Verstappen and Daniel Ricciardo. Verstappen and Ricciardo were side by side into turn two, forcing the latter to give way to his team mate. This also allowed Renault's Carlos Sainz Jr to get a move done on both Red Bull racers. The two would keep going wheel to wheel for the rest of the race.

Further back, Raikkonen was making a strong recovery drive, preserving his tires for a late pit strategy. Like Raikkonen, Alonso was also charging through the field to break into the top ten. Rookie Charles Leclerc was also making waves in his Sauber, getting close to the top five and consistently staying in sixth. Meanwhile, Hulkenberg would take himself out of the race when he slid into a barrier.

After a cycle of pit stops, Vettel ended up in second as the team of Valtteri Bottas elected for a late pit strategy. As a result, Bottas would have nearly 20 seconds between him and Vettel. The late pit strategy also did favors for Sergio Perez, who began making his drive for the top five. 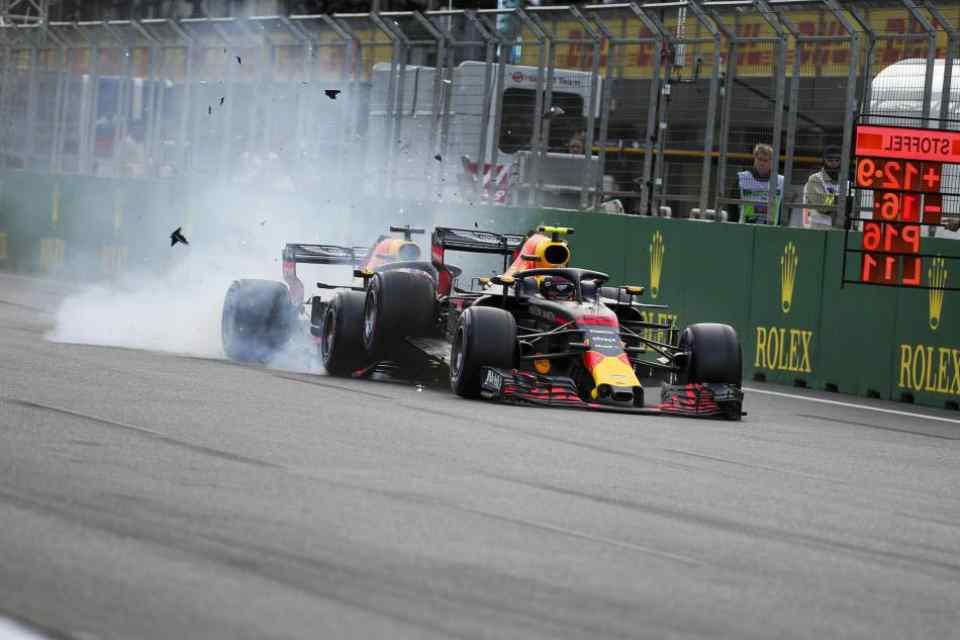 Back to the Red Bulls, lap after lap of close racing ended up in a crash when Verstappen shut the door on a late braking Ricciardo. The impact was strong enough to take both of them out, much to the anger of Red Bull team bosses Adrian Newey and Christian Horner. With debris scattered all over the track, the safety car was deployed yet again. However, the drama didn't stop there. While behind the safety car, Romain Grosjean tried to heat up his tires but ended up into the wall.

Racing resumed with just four laps to go and Vettel tried to lunge for the lead. The move was not successful as he ended up flat-spotting his tires and slid down to fouth. This gave Bottas more breathing room and a potential 1-2 finish for Mercedes-AMG. Raikkonen's strong recovery drive netted him a spot on the podium and Vettel's misfortune also mean Perez was in the hunt for third. Unfortunately for Bottas, he ran over debris with three laps to go, forcing him out of the race. 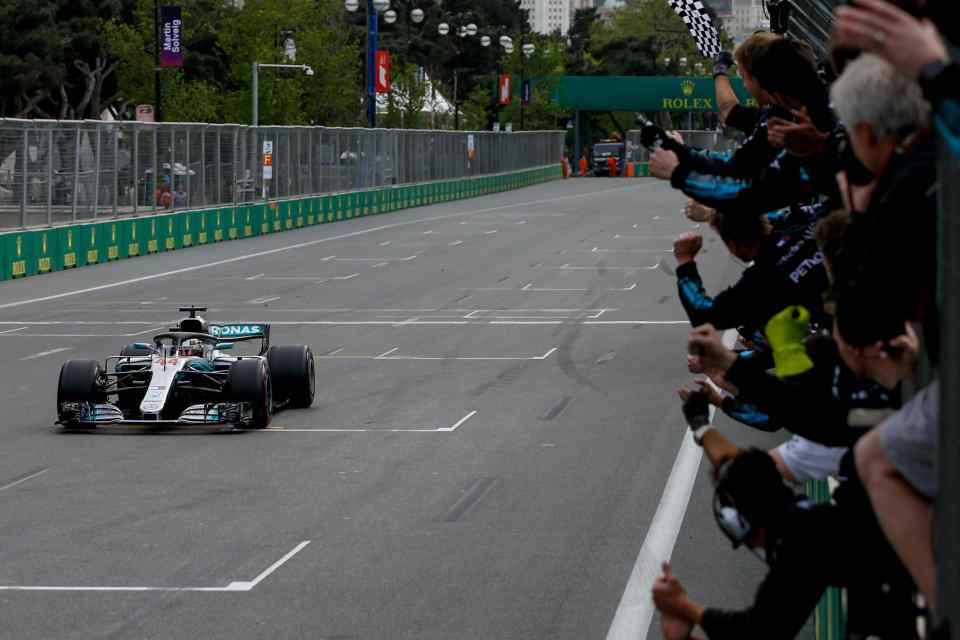 Taking the lead was Hamilton who cruised to victory with Raikkonen finishing second and Perez in third. Vettel hung on to finish fourth while Carlos Sainz Jr took home fifth. Charles Leclerc managed sixth and was the highest finishing rookie on the grid. Alonso crossed the line in seventh, a strong performance given the fact that he suffered heavy damage in the first laps. Rounding up the top ten were Lance Stroll, Stoffel Vandoorne and Brendon Hartley.