Menu closes in on Yvan Muller's rank for the driver's championship

The WTCC event held at the Hungaroring in Budapest, Germany came to a happy ending on the second race, with thousands of spectators standing up, cheering, and waving their national flags as Norbert Michelisz’s BMW crossed the line and finished first place.

Earlier during the first race, reigning world champion and current point leader Yvan Muller had won the race, leading home his Chevrolet team-mates Rob Huff and Alain Menu at the end of another dominating performance put in by the RML-built Cruze cars.

The 52,000 enthusiastic Hungarian fans that came to the track that weekend cheered as Michelisz passed the last twelve laps of race two in first place. 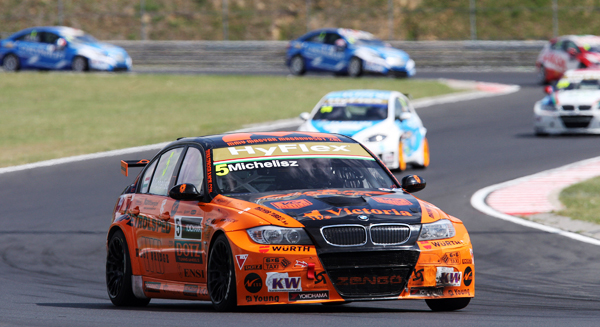 In the overall ranking, Alain Menu has moved a little step forward compared to his team-mates. With a third and a second in today’s races, the Swiss has moved up to second, ahead of Huff, and closed a bit of the gap from Muller.

Proteam Racing’s Mehdi Bennani was the event’s other hero. After claiming his best result ever in WTCC by finishing fourth in the first race, the Moroccan driver immediately bettered his performance, becoming the first
North African racer to achieve a podium result in an FIA World Championship.

The championship will resume at the Austrian Salzburgring, on May 20 for rounds 11 and 12.

WTCC's first visit to the Slovakia Ring saw victories in the two races going to Gabriele Tarquini in a Lukoil Racing SEAT León and Robert Huff in one of the factory Chevrolet Cruze cars. Tarquini gives the new SEAT 1.6 litre turbocharged petrol engine its maiden victory.