Starting line will be along Rizal Drive

Marlon Stockinger to drive around BGC on June 27

Globe Telecom unveiled the street circuit layout that will be driven on by Marlon Stockinger tomorrow, August 30, at the Bonifacio Global City (BGC) in Taguig. The run is a promotional event held by Globe Telecom to showcase their support for the young driver in the Formula Renault 3.5 series. 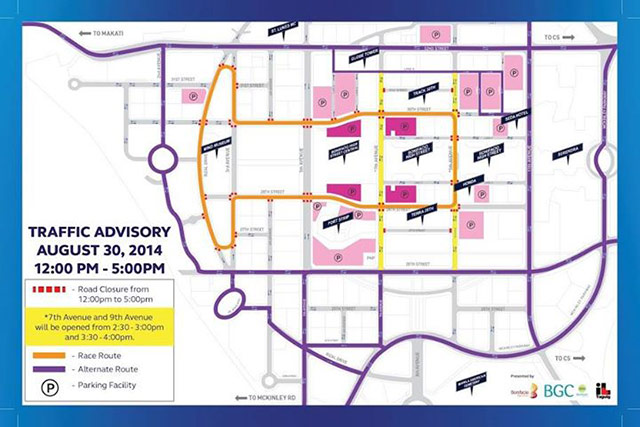 Based on the map, the roads that will be used to form the circuit will involve Rizal Drive as the main straight with the start/finish line, sections of 3rd, 28th, 9th and 30th Avenues. The circuit will be used to demonstrate the Lotus formula race car that was used in the World Series by Renault as well as a variety of exhibition races and parades.

With this, Globe says that the affected roads will be closed from 12 p.m. to 5 p.m. tomorrow, August 30. Globe and BGC also provided alternate routes as seen on the purple colored legend on the map.

The Fil-Swiss driver's career highlights include a GP3 Series win at the Circuit de Monaco in 2012 for Status Grand Prix as well as a podium at the Nurburgring GP circuit in this year's World Series by Renault.